After slashing interest rates to historical lows following the onset of the pandemic, the Monetary Policy Committee (MPC) hiked interest rates by 25 basis points (0.25%) to 3.75% at the November meeting, in line with our expectations. The MPC cited inflation risk as an important factor, but emphasised that the current trajectory of interest rates remains supportive of the economic recovery. 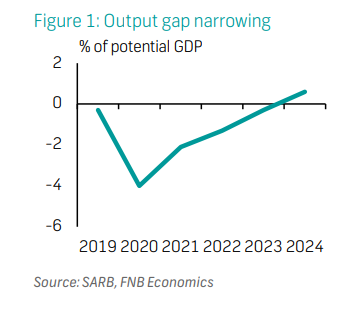 The MPC views the current global backdrop as less supportive of the economic rebound in emerging markets than earlier in the year. Emerging markets are more vulnerable to disruptions from resurgent waves of Covid-19 infections, given slower vaccination rates. Resurgent waves could also lengthen supply chain disruptions – which has lifted inflation in advanced economies and could prompt quicker policy normalisation – lift financial market volatility and raise risk-off sentiment towards emerging markets. Nevertheless, trading partner growth projections are broadly unchanged and should still support demand for our exports. 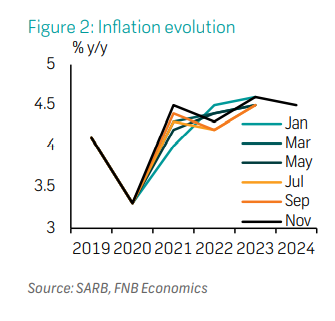 Domestic growth for 2021 was revised slightly lower, reflecting a larger-than expected impact of the July unrest and factors such as load-shedding, but still shows a solid rebound from last year’s contraction.

Growth is currently expected at 5.2% for 2021 and averages 1.8% between 2022 and 2024. GDP growth in the outer years is weak but because potential growth is even weaker, on account of lacklustre investment growth, the output gap closes and turns positive in 2024 – applying upward pressure to interest rates. However, there are downside risks to growth. Low business confidence and weak investment growth should dampen employment prospects and household spending, while the impetus from the currently elevated terms of trade should abate. Ultimately, weaker domestic demand would slow underlying inflation. 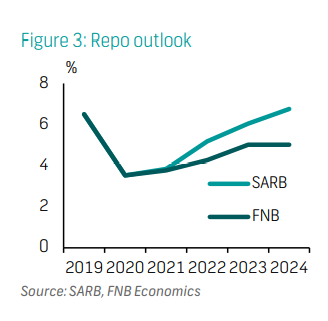 Underlying inflation is expected to gradually approach the target over the forecast period, dampened by muted unit labour costs as improvements in the labour market should be protracted (thus units of output are produced with less labour headcount). Worryingly, risks to the headline inflation outlook are mounting. In addition to the spillover risk from global inflation, elevated administered price inflation (exacerbated by a weaker rand ) could affect inflation expectations and wage pressures, which would lift underlying inflation. Headline inflation is currently projected at 4.5% in 2021, 4.3% in 2022, 4.6% in 2023 and 4.5% in 2024. Expectations for average inflation in 2021 were consistently lifted since the January MPC meeting.

Inflationary pressures and a closing output gap suggest that policy should hike in every quarter of 2022, 2023 and 2024 – which would be 12 hikes over the forecast period, ending 2024 at 6.75%. In the Quarterly Projection Model set-up, these hikes are necessary to avoid a de-anchoring of inflation expectations and maintain inflation at around target of 4.5%, while building policy space (moving real interest rates out of negative territory and moving them closer to their neutral level). The MPC maintains that this is a guideline for policy and the committee’s decisions will remain data dependent. Overall, interest rates will remain lower for longer, gradually rising to prepandemic levels. We also expect the hiking cycle to be gradual, but our projections end 2024 at 5.0%. This reflects differences in perceptions of the neutral level of interest rates, as well as our view that the economy will need as much support as possible and that inflationary pressures will be subdued by protracted weakness in labour markets.

Scientists have cautioned that while hospital admissions during the fourth wave should be lower than in previous waves, supported by the vaccination drive, bed availability may be a concern. With lighter lockdown restrictions and the slowing number of new cases, hospitals have reallocated capacity to other services and the uptake of elective procedures has increased – resulting in less readily available capacity for emergency services. This reduced capacity may not be sufficient to cater to even a smaller peak in new infections during the fourth wave. This warning comes alongside motivations to the public to continue implementing non-pharmaceutical interventions to combat Covid-19 infections, such as social distancing, hand sanitising and wearing masks in public despite fatigue. Cases are rising and the start of the fourth wave may be forming. As of 18 November, 585 new Covid-19 cases have been reported locally, reflecting a positivity rate of 1.7%. The seven-day moving average of local infections stood at 360, reflecting a 31.03% w/w increase. 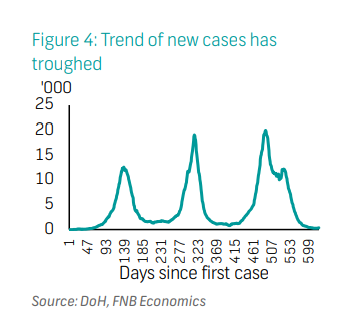 According to the Department of Health 16.15 million people have been vaccinated, representing 40.59% of the adult South African population. The momentum of vaccinations improved only slightly from a recent low of 0.17 vaccines administered per 100 people on 11 November to 0.19 per 100 people on 16 November.

Consumer inflation was steady in October

Headline inflation was steady at 5.0% y/y in October and increased by 0.2% m/m, explained by core as well as food and non-alcoholic beverages (NAB). Core inflation increased by 3.2% y/y and had 0.2% monthly pressure – major contributions were from restaurants and hotels and alcoholic beverages and tobacco. Services inflation remained muted at 3.0% and, while total goods inflation was up 7.1% y/y, core goods inflation was below 4.0%. Fuel inflation increased by 0.1% between September and October and prices remain elevated relative to the same period last year, rising by 23.1% y/y from 19.9% y/y previously. Food and NAB inflation increased by 0.9% m/m and 6.1% y/y, from 6.6% y/y previously. Inflation should be higher in November, with fuel inflation providing significant upward pressure after the R1.21 per litre price hike. Fuel price inflation remains a great source of near-term risk, with some analysts predicting prices breaching the R20 per litre mark by year end given a weaker rand and elevated Brent crude oil prices. With the latest print, we project headline inflation at 5.5% in November and still 4.5% on average for 2021. 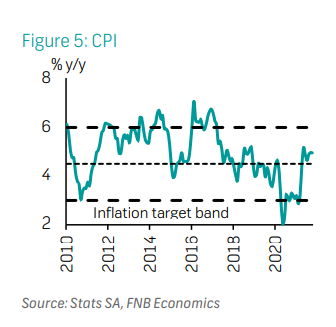 Following an unexpected decline of 1.5% y/y in August, retail sales volumes rebounded by 2.1% y/y in September. Seasonally adjusted volumes gained 5.1% m/m, after recording an incomplete recovery of 4.9% m/m in August, following a deep riotinduced 11.2% decline in July. However, the successive recovery was not enough to fully counteract the July blow and compared to the previous quarter, the 3Q21 trade sales declined by 5.4%, confirming that the retail trade sector will contribute negatively to the 3Q21 GDP. Year-to-date volume sales are 8.0% higher compared to the same period in 2020, but still 1.4% below 2019 levels. The 3Q21 retail sales volumes show that the impact of the riots on the sector might be bigger than initially thought. This means that there may have been a bigger impact on employment than previously assumed. Notwithstanding, factors such as the improved roll-out of income support grants, an improvement in consumption credit uptake (credit cards and general loans), the better-than-expected civil wage agreement and the swift recovery in non-labour income should support retail sales volumes going into the festive season. However, these must be weighed against elevated transportation costs, still depressed consumer sentiment, slow readjustments in the labour market and possibly a less supportive interest rate environment.

The leading business cycle indicator for September will be published on Tuesday. The leading indicator increased by 0.7% m/m in August, after declines of 2.5% m/m in July and 4.4% m/m in June. On an annual basis the leading indicator was up 14.9%, from 19.0% in July – as base effects from 2020 continued to wane. Most sub-indices (60%) decreased in August but increases in the other 40% dictated the overall outcome. The improvement was led by job advertisements and the number of new passenger cars sold, while declines were notable in average hours worked by factory workers as well as the index of export commodity prices. 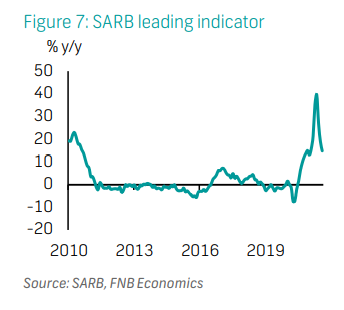 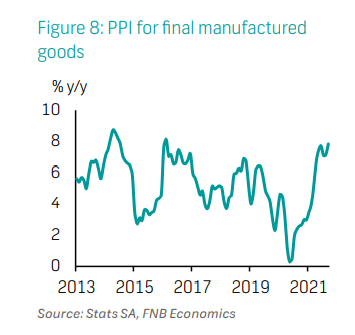 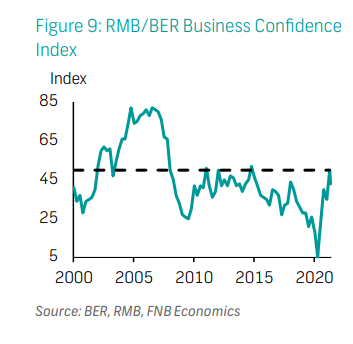