Most major world markets closed May higher, although gains for some indices were modest as buying interest remained somewhat subdued on concerns over inflation and the pace of the global economic recovery continued to weigh on sentiment. Still, for the most part, this past month also saw optimism around the US economic recovery (as well as some strong US economic data) and the prospect of further stimulus measures as investors closely watched negotiations in Washington. Last week, Senate Republicans unveiled a US$928bn infrastructure counteroffer, well-below US President Joe Biden’s most recent proposal of a US$1.7trn infrastructure spending package aimed at further bolstering the US economic recovery.

Two of the major US indices closed May in the green, with the blue-chip S&P 500 notching up its fourth-straight month of gains (up 0.5% MoM and 11.9% YTD) and coming within a whisker of an all-time high on Friday (28 May), while the Dow Jones rose 1.9% MoM (+12.8% YTD). The tech-heavy Nasdaq (-1.5% MoM; +6.7% YTD) underperformed major equity benchmarks, ending a six-month positive run and recording its first MoM decline since October 2020, despite the index gaining 2.1% last week, according to CNBC.

On the US economic front, data released on Thursday (27 May), showed that the US jobs market was getting closer to pre-pandemic levels, as first-time jobless claims totaled 406,000 for the week ended 22 May – still significantly above the pre-COVID-19 norm but a drop from the prior week’s 444,000 and a new pandemic low according to the US Labor Department. US 1Q21 GDP grew an annualised 6.4% – matching the initial estimate and quite a bit higher than 4Q20’s 4.3% GDP growth. April core personal consumption expenditure (PCE) inflation advanced 0.7% MoM, while YoY core PCE (the Federal Reserve’s preferred inflation gauge) jumped by a higher-than-expected 3.1% vs March’s 1.9% YoY gain (and consensus expectations of a 2.9% rise). After reaching a pandemic high print of 88.3 in April, The University of Michigan’s consumer sentiment index dropped to 82.8 in May – the lowest reading since February. This as confidence in the US economy declined, likely brought about by higher living costs and as the euphoria around, and momentum from, the economy reopening starts to wane. April US payrolls data released in May was the biggest miss in the series’ history coming in c. 750,000 – lower-than-expected and showing a weak 266,000 gain.

Elsewhere, optimism around Europe’s economic recovery prospects continued to drive markets higher with the region’s largest economy, Germany’s DAX rising 1.9% MoM (+12.4% YTD), while the eurozone’s second-biggest economy, France saw its CAC Index end May 2.8% higher (+16.1% YTD). In terms of economic data, May eurozone economic sentiment climbed more than expected (to a three-year high), as the European Commission’s index rose to 114.5 points vs 110.5 in April. However, France’s initial stronger-than-expected 1Q21 GDP growth print of 0.4% was revised lower in May, with the country’s economy contracting 0.1% in 1Q21, according to final data released on 28 May, and sliding into a technical recession.

The UK’s FTSE 100 Index gained 0.8% MoM (+8.7% YTD), while the UK economy recorded a GDP decline of 1.5% in 1Q21 (when the country was under a third lockdown) – slightly better than initially feared. The Bank of England said in May that the UK economy was on course to grow by c. 5% in 2Q21 as the country moves forward with Europe’s fastest vaccination programme and if COVID-19 restrictions are lifted. Unfortunately, Prime Minister Boris Johnson last week warned that a full lifting of restrictions on 21 June may have to be postponed as cases of the COVID-19 variant first detected in India doubled over the past week.

In Asia, Chinese markets recorded good performances as Hong Kong’s Hang Seng Index gained 1.5% MoM (+7.1% YTD), while the Shanghai Composite Index jumped by an impressive 4.9% MoM (+4.1% YTD). In terms of economic data, China’s official May manufacturing purchasing managers’ index ( PMI ) contracted slightly to 51.0 (a three-month low) vs April (51.1) and Reutersconsensus analyst expectations of 51.1. The 50-point mark separates expansion from contraction. However, services PMI rose to 55.2 in May from April’s 54.9 print – a fourteenth-straight month of growth. Japan’s Nikkei closed the month 0.2% up (+5.2% YTD), while the total value of the country’s April retail sales fell by a seasonally adjusted 4.5% MoM, missing consensus expectations of a 2% MoM gain. YoY, retail sales jumped 12.0% (off a low base), but again missed consensus expectations of a 15.3% YoY gain.

On the commodity front, oil prices (+3.1% MoM/+33.8% YTD) firmed in May gaining c. 5% in the last week of the month alone and reaching two-year highs (close to the US$70/bbl level) on the back of expectations of a rebound in global oil demand. Gold rose 7.8% MoM (+0.4% YTD), as concerns around global inflation, a weaker US dollar, and extreme volatility in cryptocurrencies buoyed the yellow metal, which last week scaled five-month highs. A rally in the iron ore price this year (+78.4% YTD) has been compounded by tight supply from Brazil and Australia and rising steel demand, especially from China, amid a global building boom funded by worldwide infrastructure spending. MoM, iron ore rose 13.6%, supported by increasing billet prices in China and a potential easing of steelmaking restrictions in Tangshan, the largest steel manufacturing hub in the world, accounting for c. 14% and 8% of China and the world’s total crude steel production, respectively. Palladium , which is used in catalytic converters to curb emissions by petrol-powered vehicles, was down 3.8% MoM after hitting an all-time high in April and the Platinum price closed May c. 1% lower MoM.

In local economic and related news, at its May meeting, the SA Reserve Bank’s (SARB) Monetary Policy Committee (MPC) unanimously decided to keep rates at 3.5%, as was widely expected. However, the SARB’s 2021 GDP forecast was revised higher to 4.2% YoY (from 3.8% in March). This stronger growth forecast for 2021 is reflective of better sectoral growth performances and more robust terms of trade in 1Q21. However, the SARB highlighted that slow progress on vaccinations, limited energy supply, and policy uncertainty continue to pose downside risks to growth. In a move that should assist in calming market concerns around inflation, the SARB’s forecast for 2021 CPI is slightly lower at 4.2% (down from 4.3%) and for 2022 and 2023 unchanged at 4.4% and 4.5%, respectively. April‘s annual headline inflation, as measured by the consumer price index (CPI), jumped to 4.4% vs 3.2% in March. This was largely due to a combination of higher fuel prices in the month and base effects created by price imputations during 2020. Whilst this is the highest inflation reading since before the COVID-19 induced lockdown (inflation was at 4.6% in February 2020), we note that inflation remains well within the SARB’s 3%-6% target band. Seasonally adjusted March retail sales decreased 3.7% MoM, following a 6.9% MoM rise in February and a 2.3% MoM decline in January 2021. The print came in against expectations of a marginal increase, reflective of the underlying weakness currently being experienced across SA households. April’s trade balance recorded a better-than-expected surplus of R51bn vs March’s revised R52.5bn surplus, while exports decreased 3.9% MoM to R161bn and imports declined 4.6% MoM to R110bn.

On the pandemic front, in an address to the nation on 30 May, President Cyril Ramaphosa announced that SA would reimpose stricter COVID-19 measures (effective 31 May) in light of the third wave of the pandemic having already impacted four of the country’s nine provinces. The restrictions include limiting the number of people allowed at public gatherings, funerals etc. and non-essential businesses (restaurants, bars, etc.) having to close by 10 PM with a curfew now starting at 11PM and ending at 4AM. The latest Department of Health data show that on 31 May, total confirmed COVID-19 cases stood at 1.67mn vs end-April’s 1.58mn. Thus far only c. 968,319 people have been vaccinated (although the vaccination drive does seem to have gained some traction over the past few weeks). 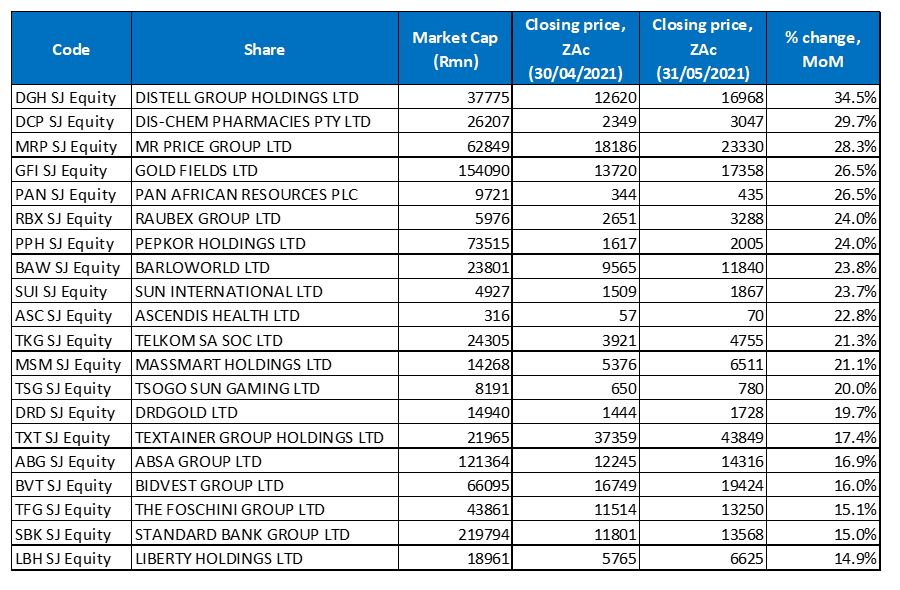 Distell Group Holdings (JO: DGHJ ) was May’s best-performing share, rising 34.5% MoM after Dutch brewer, Heineken NV (AS: HEIO ) NV confirmed that it was in talks with Distell about acquiring the majority of its business. Distell makes wines and spirits and is the world’s second-largest cider maker, a segment of the market in which Heineken is heavily involved. Discussions are reportedly ongoing with no certainty that a deal will be reached.

Distell was followed by Dis-Chem Pharmacies(JO: DCPJ ) (JO: DCPJ ) in second place, with a MoM share price gain of 29.7%. Dis-Chem reported a solid 11.8% YoY rise in its FY21 headline earnings per share (HEPS) and reinstated its dividend, despite the company’s FY21 coinciding with the COVID-19 outbreak. The Group said it suffered direct pandemic-related costs of R56.6mn in the year to end February 2021, even though its pharmacies remained open as an essential services provider during the hard lockdown.