Since early October, the S&P 500 and the NASDAQ 100 have rallied as much as 10% and 15%, respectively. The push higher has been tied to a better than expected third-quarter earnings season. However, the stronger-than-expected earnings season has not translated to a more robust outlook for 2022 or 2023, with earnings estimates hardly rising for those years. The entire rally has been driven by a higher PE ratio.

If anything, the recent run up should be more problematic than ever before. It serves as a warning sign that this entire rally since the beginning of October is not because of improving fundamentals but because of additional risk-taking. 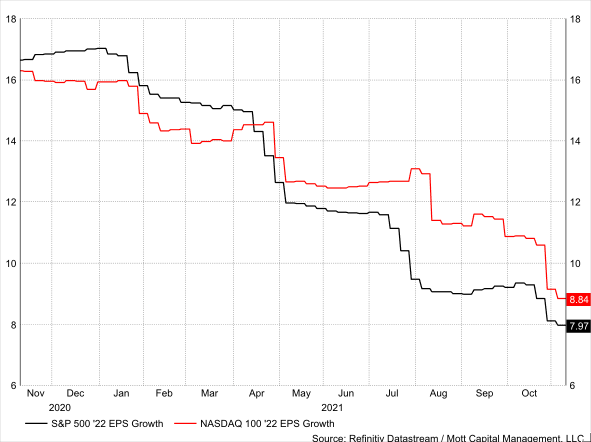 The NASDAQ 100 is currently trading at 29 times 2022 earnings estimates which is significantly higher than mid-May when it was trading at 24 times. The expanding multiple comes as bottom-up consensus analysts estimates for the NASDAQ 100 have fallen to $551.22 per share, down nearly 2% from its September peak of $562.16. Additionally, the growth rate for the NASDAQ 100 is forecast to fall to just 8.8% next year. This future growth rate has been slipping decisively since the middle of July, when it stood at 13.1%.

It doesn't get much better for the S&P 500, which has seen its PE ratio rise to around 21.4 times its 2022 earnings estimates, up from 20 on Oct. 4. Its current PE ratio is the index's highest level since the beginning of the coronavirus pandemic versus 2022 estimates. Meanwhile, earnings estimates for 2022 have risen less than 1% since Sept. 30 to $217.11 per share. The growth rate for the S&P 500 is forecast to be just below 8%.

All About Rising PE Ratios 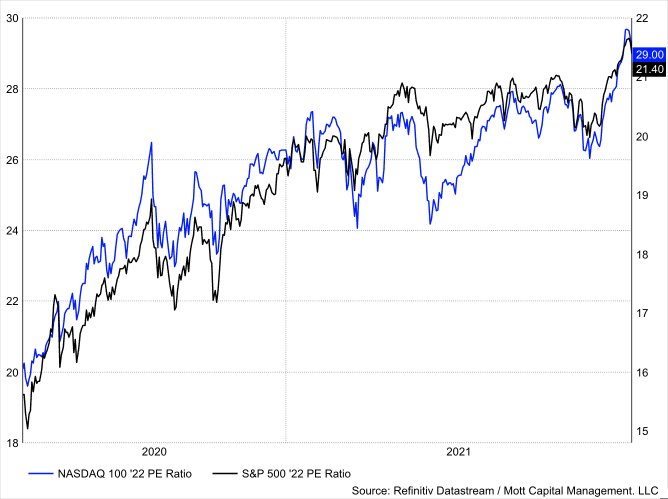 It seems beyond strange to see a stock market rallying with a rising PE ratio when the two major indexes are seeing earnings revisions that are flat or falling, along with slowing growth rates. The move higher is the opposite of what one would expect—slowing growth rates and flat or falling earnings estimates should be causing the PE ratio to fall and the value of those stock indexes to decline.

The Gains May Not Hold 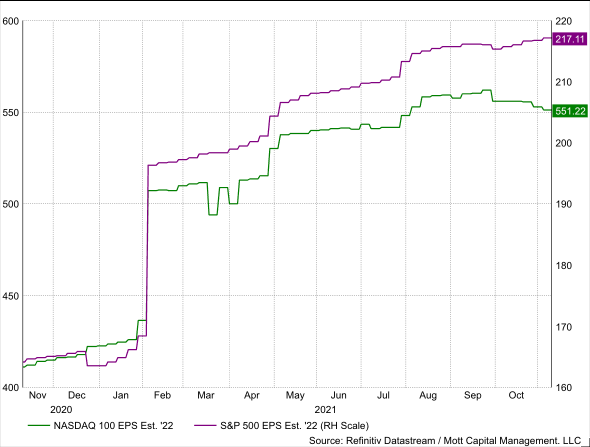 It makes the current rally in the stock market very suspicious and leaves it on a fragile footing. Given that the growth rate for earnings next year is dropping and has been steadily falling, one could argue that the PE ratio for the NASDAQ 100 should be even lower than its Oct. 4 value.

If the rally does falter, it shouldn't come as a surprise; there was no basis for it to happen to begin with.