The US stock market provided the worst returns since 1970 for the first half of a year. Let's consider that statement. It includes the Dotcom crash in 2000, the subprime crash in 2008, and the fastest exit from a bull to a bear market in 2020 amid the worst global health crisis in a century.

Now, what do we do with that fact? Should we say winter has come and hibernate until we hear birds singing, smell fresh flowers, and see budding trees with the sap flowing before we consider touching the market, or should we say this is the time to get into taking advantage of cheaper prices?

Timing is perhaps the most challenging and elusive (and some say, illusive) component of investing. Before I go on, I'll say it right here: I do NOT know what will happen. I can't tell the future. I am not in the business of fortune-telling. But, don't worry, this is not a cop-out. I will take a stand and explain myself. I'll provide my take on the current trajectory based on my interpretation of the current supply and demand rate and discuss catalysts.

All four US averages are in bear markets, dropping more than 20% from their record highs. In a bear market, stocks have the propensity for declines rather than advances. Therefore, cautious traders instead sell upon rallies than buy after a selloff. However, savvy, disciplined traders have enjoyed the most potent rallies within a bear market.

Of the four US indexes, there is an argument that the Russell 2000 is in the weakest position. 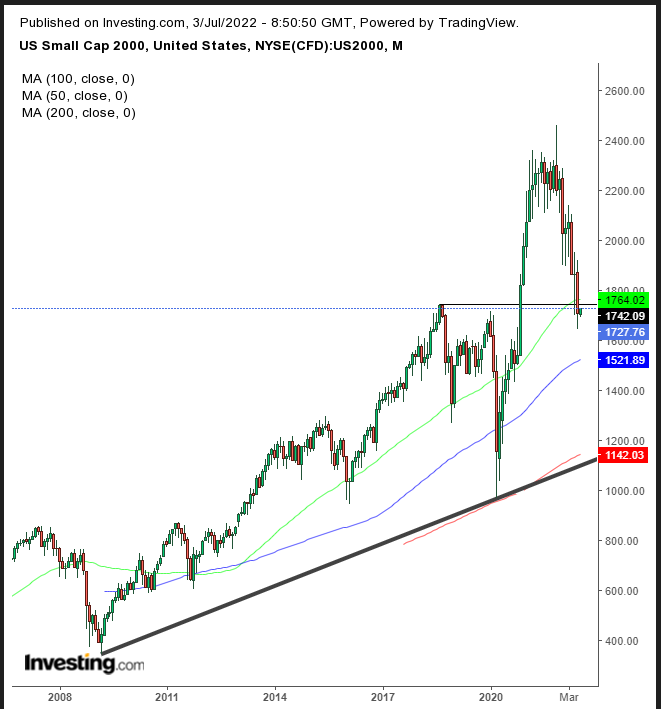 The Russell 2000 is the only significant American gauge that fell below its 200-month MA and its previous significant high, as seen in the chart. The 100 MMA could be the first initial target before the 200 MMA, which happens to realign with the uptrend line since the 2009 bottom. To clarify, the price falling below the first significant MA and the previous high does not mean that it can't bounce from here, especially when they're so close. It just means that if the price remains below these levels, it's more likely to keep heading lower to the subsequent bullish strongholds, as mentioned above.

Why would small caps fall the most from a fundamental perspective? The themes driving the bear market are the fastest tightening monetary policy in decades, to match the highest inflation in over forty years, threatening to slow down growth, if not throw the economy into an outright recession. Therefore, smaller companies don't have the resources available to large corporations with which to navigate less available funds and higher borrowing costs. Larger companies have more money, negotiate lower borrowing rates, and play with their accounting to maximize efficiency. 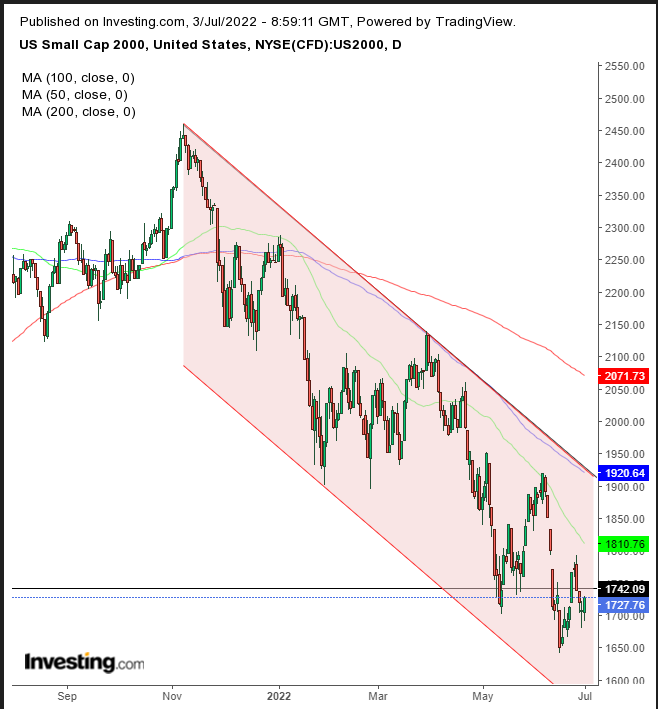 I would sell the rallies, and a good place is at the top of the falling channel. More cautious traders wait for that to happen when the channel is below the previous major support. We can see the (black, horizontal) support line, marking the Aug 2018 high.

But what about those bear rallies you mentioned earlier, Pinchas? Well, I'm glad you reminded me. I reiterate that bear market rallies offer rich rewards but also exact a proportionately higher risk. Unless you're willing to assume such risk, you'd probably do better by just going along with the primary trend. Also, it requires knowledge, experience, and - most of all - discipline to stay true to your preset plans and not let emotions run you to the ground. Let's zoom into the hourly chart. 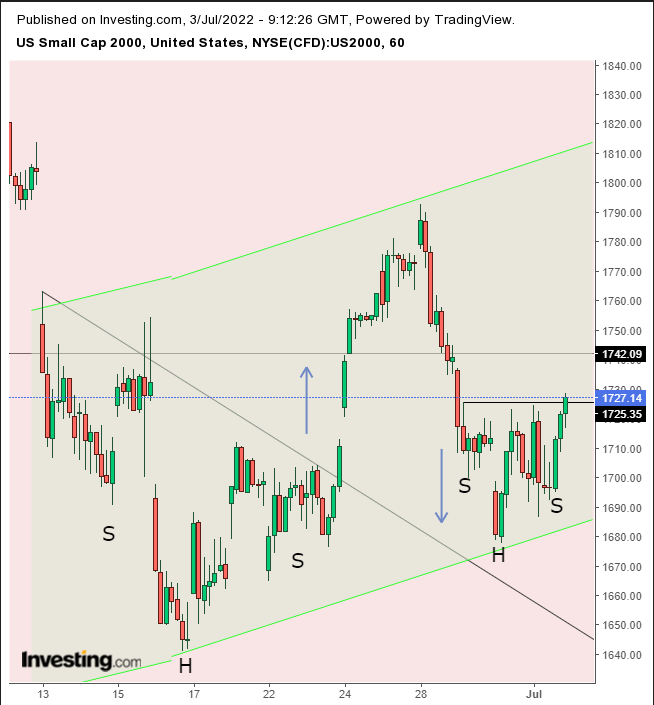 We can see the short-term uptrend (green) within the long-term downtrend (red). The Russell may have completed a small H&S bottom. Note how the neckline turned from resistance to support. Finally, in last week's final hour, Russell completed an even smaller H&S base, which may push the price toward the channel top, which could then push the price toward the daily channel top.

Other than the natural flow of human emotions that go from one extreme to another, providing rallies within a bear market, catalysts can create a powerful rally as traders race to buy what is suddenly colored as a bargain. The question professional traders will keep trying to answer amid market volatility is whether inflation will peak before we enter a recession, allowing an economic recovery.

I'm looking forward to economic data on employment and inflation, which could be a catalyst as the Fed has already increased 150 basis points.

If the jobs number comes lower than expected, I expect further sell-offs on increased recession concerns.

Next (LON: NXT ) week, I'll be looking for US consumer price data . The last one was surprisingly higher, forcing the Fed's hand to increase interest rates by a massive three-quarter percent.

All this comes in the background of allowing economic activity, as measured by Friday's US manufacturing activity , dropping to a two-year low last month. A week earlier, a report revealed that consumer confidence was at a 16-month low.

In the week of July 11, we will embark upon a new earnings season. It will be a much-needed opportunity to learn how companies weather spiking inflation, jumping borrowing costs, and overall pessimism. Also, it's essential to understand how to measure success, primarily based on expectations. Analysts forecast that quarterly earnings will increase by 5.6% annually. It's important to know that this is revised downward from a prior 6.8% expectation. Economists' expectations are waning as signs of a recession increase. Traders will have to figure out how excited to get if earnings meet or somewhat beat expectations that have been revised down. It's tricky.

We can see this quandary manifested in Treasury yields. 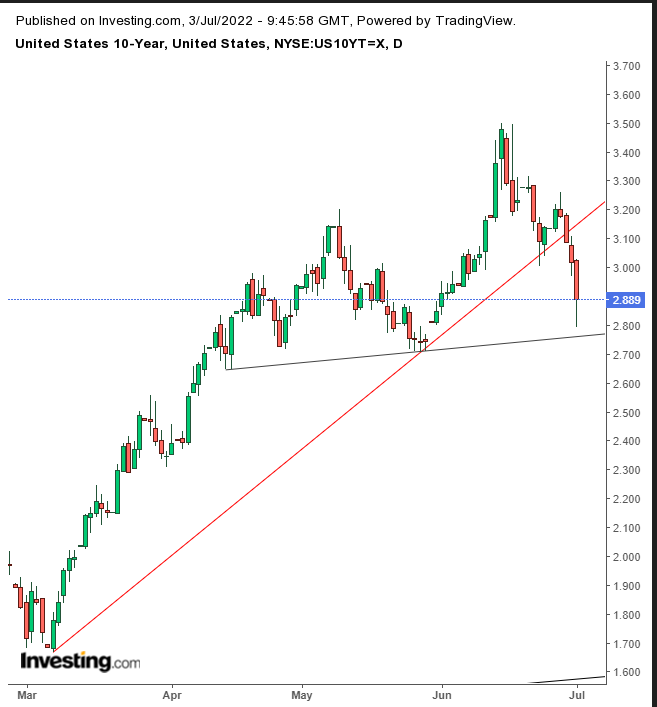 Ten-year yields fell below their uptrend and are now testing a potential top if rates fall below 2.8%. Yields have surged beforehand on the expectations that higher rates will trigger Treasuries with higher yields to be marketable. However, the recent equity selloff pushed investors into repurchasing bonds.

That begs the question, why are investors buying bonds if they expect rates to climb, making the current bond yields unattractive? It's hard to say definitively. Maybe investors expect the Fed will temper its increases. A more scary thought is that perhaps investors are choosing the lesser of two evils. They are willing to take a loss with falling bonds, expecting even steeper equity losses.

All this means to us is to keep an eye on the prize, as discussed above concerning the Russell. Whatever happens, volatility provides a target-rich environment, and if you're patient and disciplined, you increase your chances that your rewards could far outweigh your losses.

One question institutional traders have been grappling with is which will win - inflation or interest rates. Will the Fed have the courage to raise interest rates so much that it will quell inflation and risk pushing the economy into a recession? We can see the indecision on the chart. 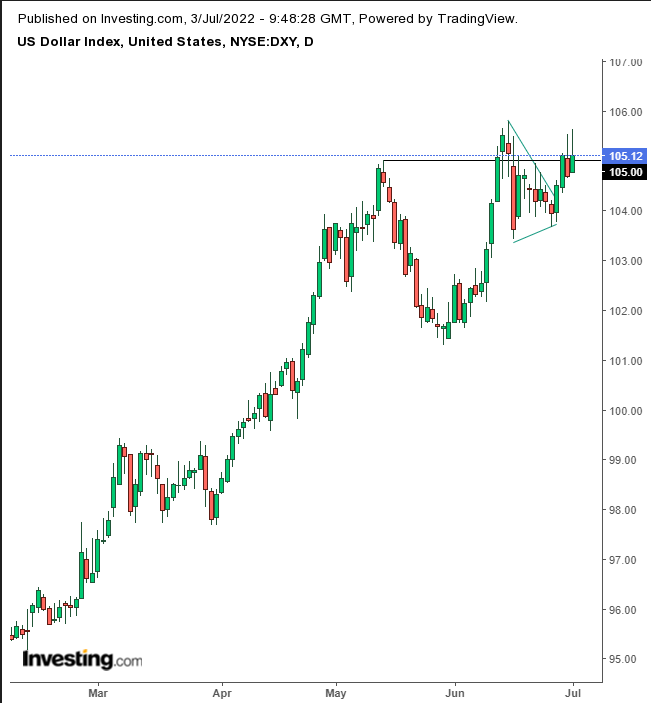 The US Dollar came to a standstill by its recent high as optimists and pessimists duke it out. However, we expect the dollar to make a new high because the Greenback completed a bullish pennant.

We can see the same conflict with Gold Futures . 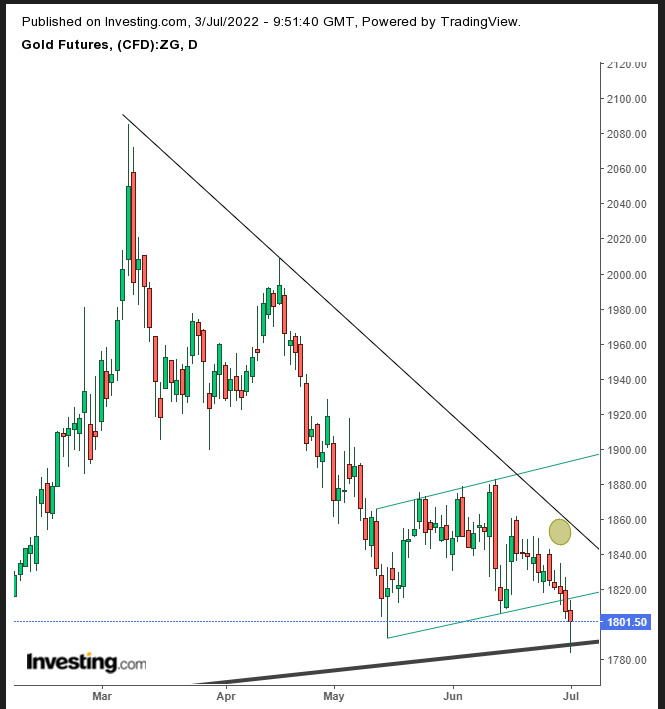 Gold has been falling since its March 8 record peak. However, the yellow metal is still in a long-term uptrend, as represented by the black line below. Note that the price was supported by the recent low and the long-term uptrend line. On the other hand, the short-term downtrend pushed the price out of a rising channel.

Bitcoin has extended its decline to 19,000, on the edge of falling to the lowest since 2020. The price has completed a bearish pattern, reinforcing my long-term bearish outlook. Each time I provided a sell call, commenters ridiculed me, but they never returned. Each time I was right.

Bitcoin is down for the eighth consecutive day, completing a continuation pattern within a downtrend. My long-term bearish call is in the link above. According to the standard principles of technical analysis, the cryptocurrency could fall to zero.

Oil has experienced exceptional volatility as it goes through dramatic news. Oil prices have been fluctuating between expectations of lower demand amid China restrictions and recession on the one hand and supply disruptions on the other. JPMorgan gave the shocking target of $380 per barrel if Russia retaliates against sanctions by limiting its crude supply. Let's see what that looks like on the chart. 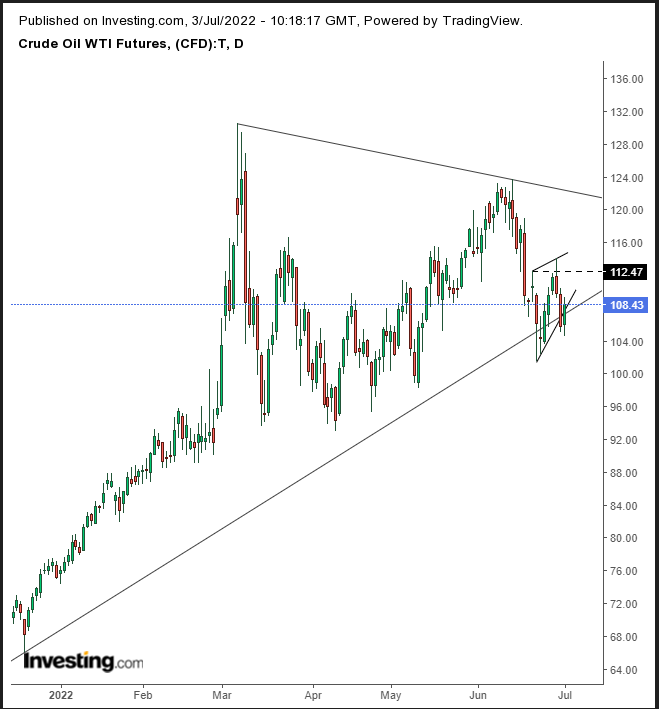 Bears have been bearing down on oil since its March peak, the highest since 2008, and the uptrend since the Dec 2021 low. The price is developing a rising flag, whose downside breakout would suggest another leg down, testing the yearly lows, in opposition to the above dramatic forecast. That doesn't mean that it can't then turn back into rallies, though. Still, if the pattern blows out, with an upside breakout, the price will retest the highest levels since 2008.

We're in a bear market, where declines are viewed as part of the trend, whereas rallies are suspect. However, savvy and disciplined traders have exceptional opportunities during a bear market, not just with shorts, as they offer some of the most powerful rallies. The thing is, you don't know when those will turn around to smack you. That's why discipline is crucial.

The bear market is driven by spiking inflation, followed by interest rates, threatening a recession unless inflation peaks out before that happens. Stay tuned to economic data, as we've described above.