Investors have increasingly gained confidence amid an ongoing rally leading up to this week's potentially cataclysmic housing data and retail earnings.

Traders saw dollar signs as stocks gained for their fourth straight week in their longest weekly run this year.

Concurrently, U.S. consumer sentiment, as measured by Friday's University of Michigan Sentiment Index , jumped to 55.1 from 51.5 in July, exceeding expectations. However, this was a bounce from June's 50 reads, the lowest on record since the data was compiled in 1952, and also represented a historically low level - so this perhaps doesn't necessarily prove that the economy has turned around.

Bank of America said investors are rushing back into markets to ease inflation fears due to falling oil prices. However, food prices have risen since 1979, with soups and cereals undergoing record annual increases. In the final analysis, the Federal Reserve does not consider food and energy prices, as they are too volatile to represent pricing trends. Moreover, Fed Chair Jerome Powell replied to Senator Elizabeth Warren of Massachusetts that rate increases are unlikely to cool energy and food prices quickly. These prices have been soaring since Russia invaded Ukraine, and there are no signs the war is waning as it approaches its six-month mark, Aug. 24.

On the contrary, the war is turning more dangerous. A series of blasts shocked a Ukrainian nuclear power plant occupied by the Russian military in Zaporizhzhia on the Dnieper River. The nuclear power plant - the largest in Europe - contains six reactors, generating more than 20% of Ukraine's electricity. Each side blames the other for the shelling. Ukraine's ambassador told the International Atomic Energy Agency that blasting the Zaporizhzhia nuclear power plant could be "much worse than Chernobyl," and some warned to prepare for a nuclear war.

Therefore, there is still a geopolitical risk for high commodity prices, which have been driving up inflation .

Meanwhile, canola , lumber , copper , and oil climbed last week (disclaimer: I am bearish on oil due to the supply-demand balance trajectory amid a recession). Cotton gained for three of the previous four weeks, and platinum climbed for a fourth week. Rising commodity prices will translate into higher prices for goods and services, i.e., rising inflation.

I remain bearish amid the strongest rally of the year, even as the Nasdaq 100 has climbed for five weeks out of the past six, surpassing the 20% accepted gauge for a bull market.

Michael Burry has reiterated his oft-repeated stance that the market rally won't last. Burry became famous by going against the grain and shorting the 2008 bubble, a daring move depicted by Christian Bale in 2015's "The Big Short." Last year, Burry warned that stimulus would cause inflation, disagreed with the Fed's characterization of its transient nature, and debated Cathie Wood, who said stocks were not in a bubble. Burry was right for the second time in a row. Will he now be three for three? I think so.

Burry scoffed at the notion that the Nasdaq is back at a bull rally because of an arbitrary 20% gauge while the tech-heavy benchmark is still 19% down for the year. Burry pointed out that the Nasdaq provided several rallies of the same scale while still crashing in the dot-com bubble burst. The money manager, considered eccentric by many, has deleted his Twitter account repeatedly. His current account goes by Cassandra B.C., aptly named for the Trojan priestess carrying a curse by Apollo that her prophecies would not be believed. Burry's account has one million followers but follows no one, perhaps symbolically underscoring that Burry follows no opinion but his own. The controversial investor is warning that "winter is coming" as credit-card debt spikes in the U.S. in response to inflation and as consumers stand to run out of cash within months, impacting company profits and the overall economy.

For now, next week's earnings from big retailers and new housing and consumer data could determine traders' next move. Meanwhile, Google searches for "sell my home fast" jumped 2,750% after the GDP fell for the second month , triggering a technical recession. Is that a good sign? Consumer confidence in homes retaining their value dropped to the lowest level in more than a decade.

The Fed and the Biden administration have been touting the strong labor market to deflect calls for a recession following the two declines in national quarterly growth.

Last week, I pointed out that "housing is always the first to respond to rates, and employment always last. In other words, it's a matter of time."

So, in addition to the Nasdaq 100 gaining over 20%, the S&P 500 climbed 15%. An optimist would say the gauge has halved its losses this year. A pessimist would point out it is still down more than 10% if you look at the half-empty glass. However, a red flag for me is that meme stocks that plunged in the first half of the year have come roaring back, and the VIX is still near a four-month low. Premium stocks rise out of the ashes in a market cycle, while speculative stocks remain behind. That paradigm demonstrates the caution of level-headed investors. However, when retail traders - whose strategy is crowd mentality - haven't gone through all psychological stages of the market cycle, that tells me that the bear market is far from over.

When will I change my mind? 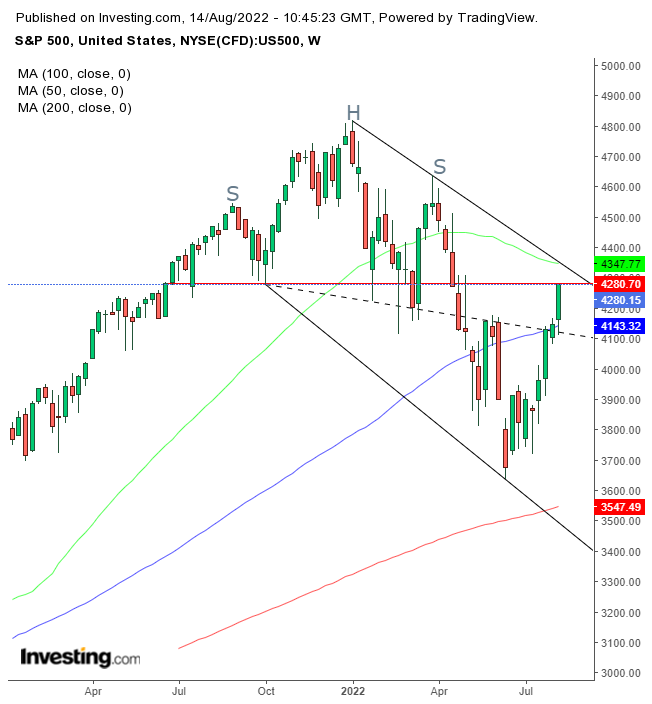 I will change my position from bear to bull when the S&P's weekly chart demonstrates a rising series of peaks and troughs that will have broken to the top of the falling channel. Although I drew the neckline of a head-and-shoulders top on a slant, incorporating the falling lows, I've seen others draw the pattern bottom horizontally. If their version is more accurate than mine, the price closed precisely below it. They would probably consider the current price an ideal short entry, especially when the price reached the channel top, guarded by the 50-week moving average.

While weekly indicators are still rising, the daily chart provides a bearish picture. 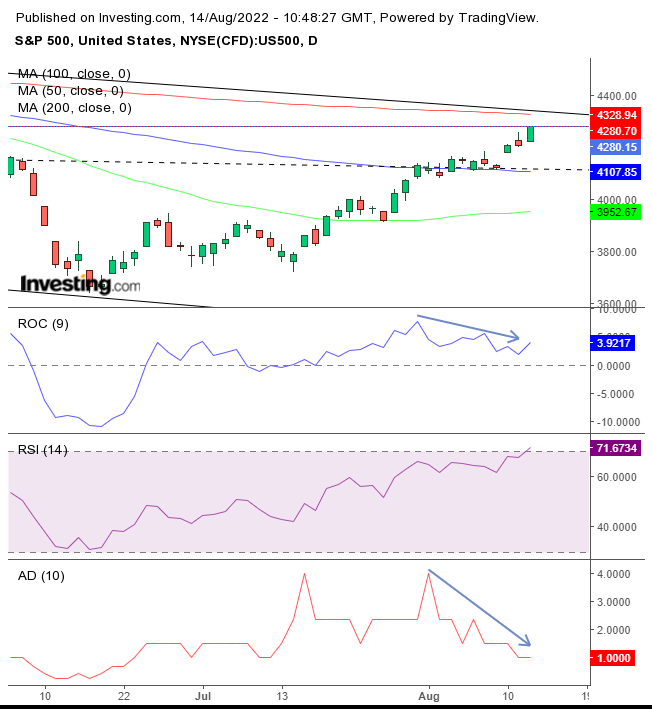 While Friday's price did close above Thursday's shooting star, the 200-day MA aligned with the channel top. Also, while the relative strength index (RSI) is still pointing up, even if overbought, the more sensitive rate of change (ROC) indicator provides a negative divergence. So does the advance-decline line. The Nasdaq 100 shows a similar chart.

The 10-to-2-year yields remain inverted and headed in opposite directions, threatening to steepen the inverted curve. 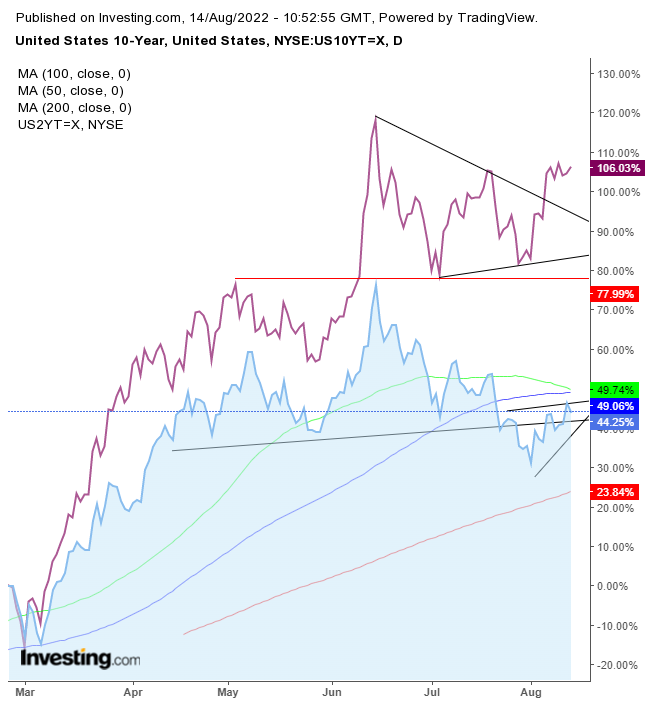 The 10-year U.S. Treasury is forming a continuation pattern to continue lower after topping out, while the 2-year has completed a bullish triangle.

In July, the yield curve inversion between the 10 and the 2 reached the biggest point since 2000, the gap between the two briefly hit its lowest level since 1982, and bond traders dismissed the rally in stocks as misguided euphoria.

The dollar has been falling since the July peak on the outlook that the Fed will slow its interest rate hikes as inflation eases. However, Chicago Fed President Charles Evans says the central bank will raise rates to 4% next year. Evans followed Fed Governor Michelle Bowman, who said the bank would resume its hikes. Before that, St. Louis Fed President James Bullard noted that until the central bank sees compelling evidence that inflation is falling, policymakers will keep pushing for more hikes. 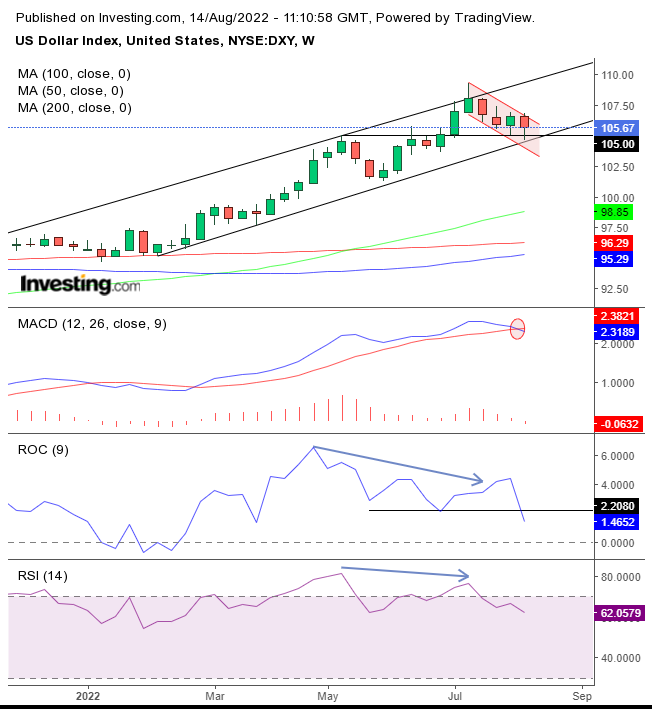 The moving-average convergence-divergence (MACD) and ROC metrics provided bearish crosses, and the ROC and RSI showed negative divergences in the price rising between May and July. However, I am more impressed with back-to-back long lower shadows where the May highs meet with the rising-channel bottom. As long as the 105.00 level holds, I expect a rally toward 110.00. However, the way could be bumpy.

Gold rose as the dollar declined. Will the two reverse course? 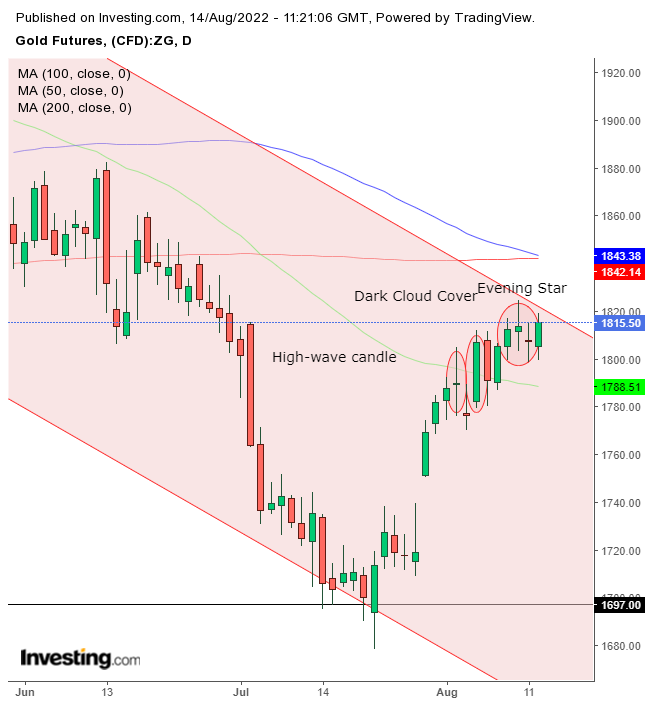 While the dollar reached trend support, gold reached a resistance level, the previous lows, and the falling-channel top. Note the congestion since the beginning of the month, riddled with bearish patterns.

While in absolute terms Bitcoin is up a whopping 40% since the June 18 low, I question the rally's sustainability. Note that since July 20, the controversial digital currency has been up a mere 1.55% and 0.04% since the July 30 high. These are the telltale signs of a rising wedge. 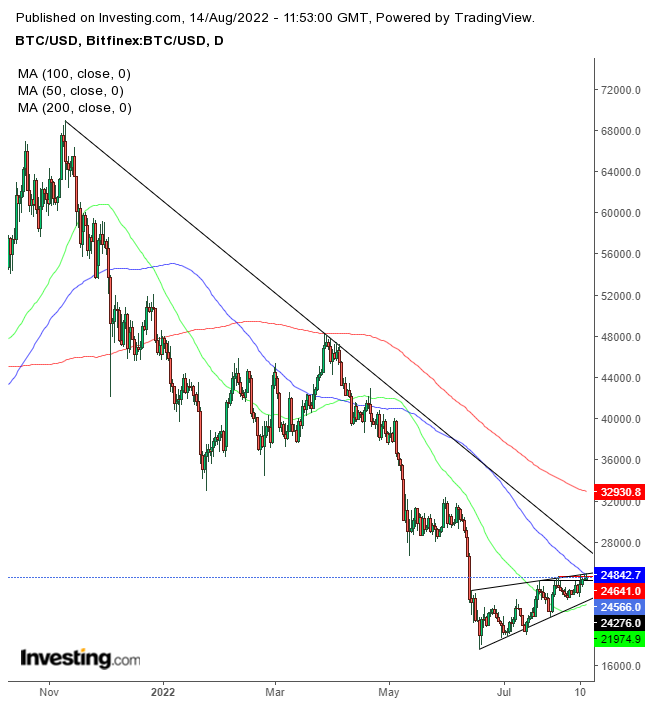 While Bitcoin jumped a generous 17.73% between its June 18 to July 26 lows, its climb between the June 14 and July 20 highs was a mere 4.07% - only one-quarter of that surge. Again, Bitcoin advanced 11.6% between the July 26 and the Aug. 10 lows while eking out a 1.47% gain between the July 30 and Aug. 14 highs. Unless the price doesn't decisively break the $25,000 barrier soon, I expect bulls to abandon positions, causing a downside breakout and triggering a move back to the June 18 lows in the $17,000s. I predict that a downside breakout will take that level, resuming the long-term downtrend. 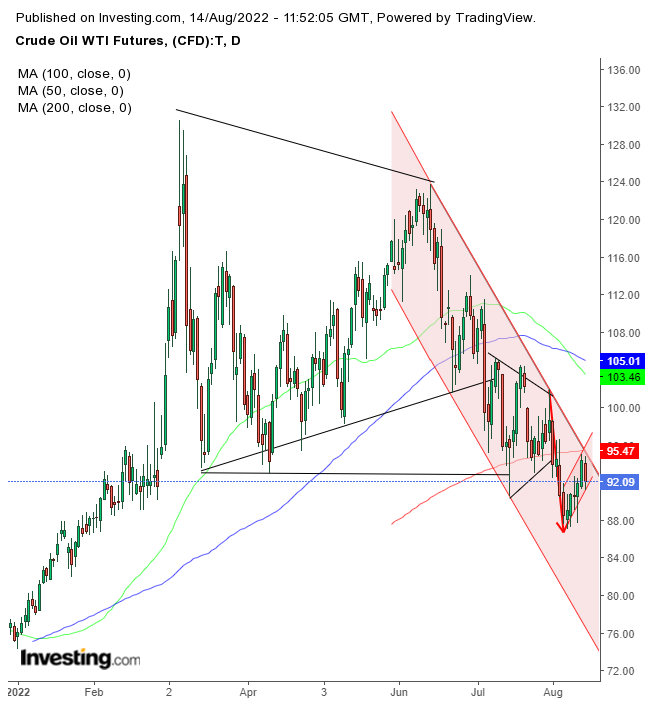