Increasing signs of recessions may be reflected in the undercurrent shifting from value to growth stocks.

This year, I have been monitoring and demonstrating a sector rotation between growth and value stocks.

Here is one number that demonstrates how economically sensitive stocks outperformed technology shares. The Nasdaq 100 has lost 29.6% this year, while the Dow Jones Industrial Average declined by 15.7%, slightly over half that amount.

However, I identified a stark reversal in June.

Here is a table with both indexes' performance going back each month cumulatively.

Note that the NDX lost about double that of the Dow in each accumulative month. However, in the last month, that comparative loss halved to just a quarter.

What does this mean? While a single month can always be an anomaly, it's noteworthy that all the previous months this year were wholly consistent. This anomaly occurs when fears of a recession escalate, with more voices joining the chorus.

Value stocks began outperforming when rates began rising, as they are sensitive to the economic cycle. However, if a recession is what we're looking at, I expect investors to shift from value to growth.

As I've demonstrated, so far it's just one month, but if I'm right, we'll see a more significant, apparent shift back to the known, big names as stocks fall harder.

So far, the cyclical sectors hitched a ride on the soaring energy prices. Still, energy and other commodities - also sensitive to the economy - have been falling in recent weeks because of the same concern: recession will end demand. 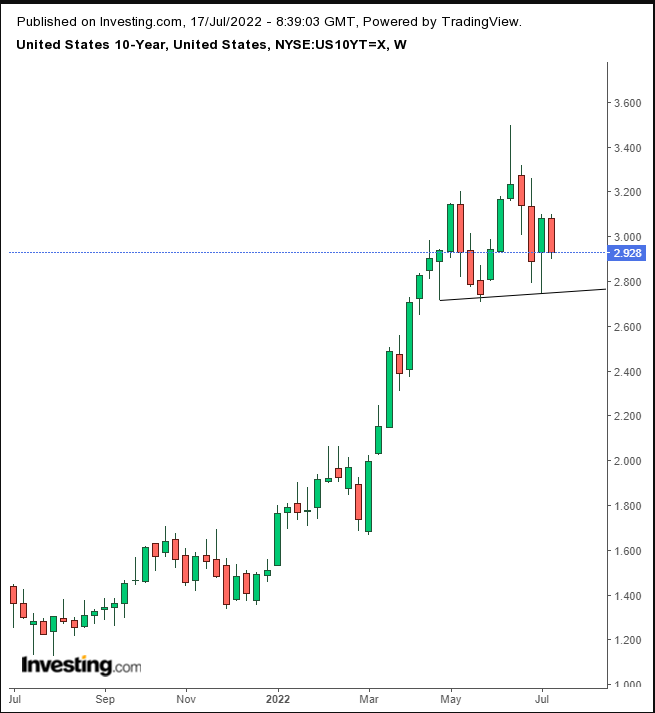 If yields continue to fall, they will complete a top, suggesting investors will buy Treasuries as they sell equities.

Also, and more importantly, the inverted yield steepened, with the 2-year rising, as the 10-year falling. 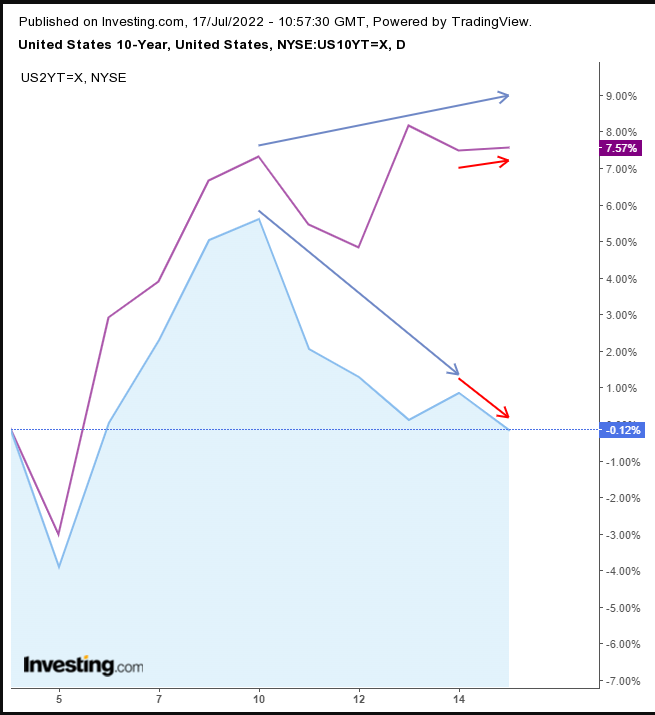 This pattern demonstrates that people are willing to be committed for longer and get paid less for more safety, and it is a leading indicator of a recession.

The dollar climbed for the third straight week and the sixth out of seven weeks, to its highest level since October 2002. 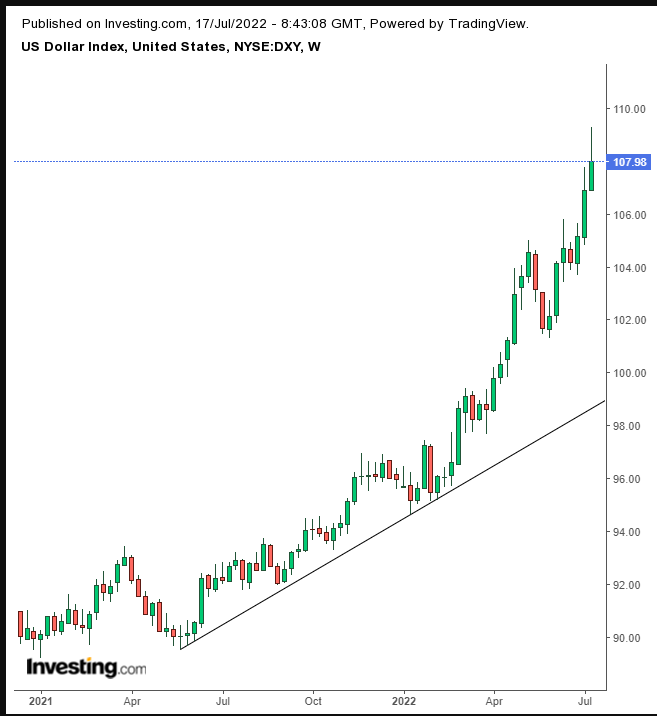 The dollar developed a long upper shadow. It may not be long enough to be a Shooting Star, but it demonstrates bearish resistance. After such a steep advance, the Greenback is ripe for a correction.

Gold Futures has dropped for the fifth week amid dollar strength and rising interest rates, offsetting the highest inflation over four decades. 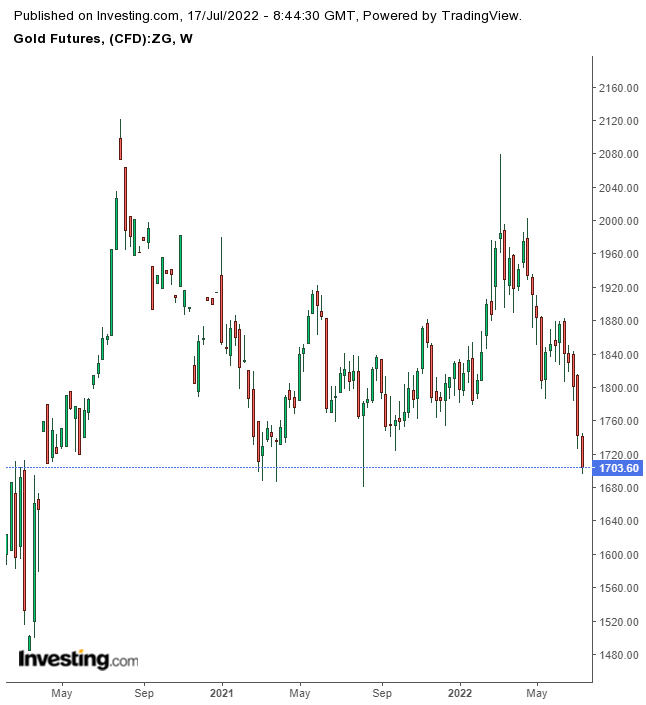 The yellow metal has been on the brink of a double top since its Aug 2020 all-time high.

Bitcoin climbed for the fifth day in a row. 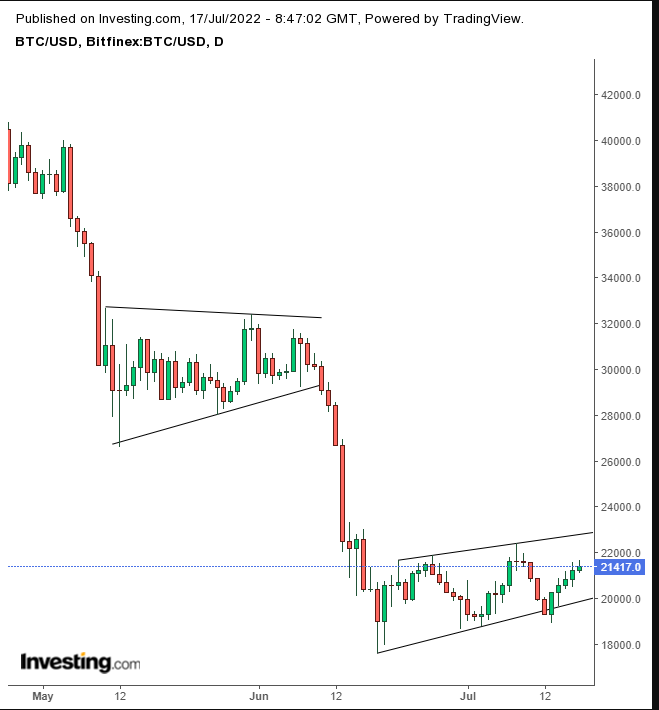 it's been a month, and BTC has not provided a downside breakout to what could have been a bearish flag. At this point, I will disregard this congestion and revert back to my overall, long-term bearish call, starting from January.

Oil rose for the last three days but closed lower for the second straight week and the fourth out of five weeks.

The market is working itself out between recession fears, lower demand, and tighter supplies. Based on the chart, I'm betting that the recession story will win, at least for now. 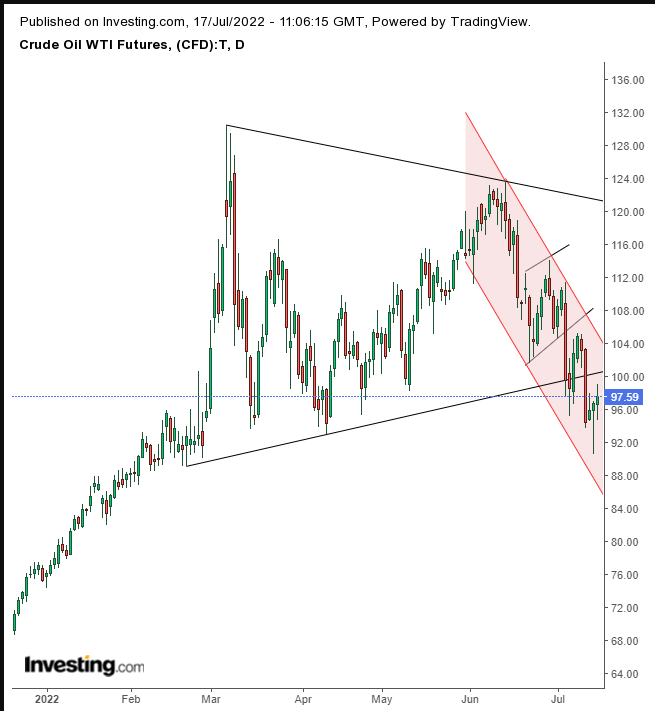 Oil confirmed the Rising Flag's bearishness and completed an even larger Triangle. Therefore, I expect oil to continue lower, along its Falling Channel, for now, and it could fall into the $60s.

Disclosure: I have no positions in any instruments mentioned.

InvestingPro+ gives you the chance to screen through 135K+ stocks to find the fastest growing or most undervalued stocks in the world, with professional data, tools, and insights. Learn More »