In Thursday's trading session in local markets, the JSE Top 40 closed the day up 0.21%. The Resources 10 Index rose by 0.77%, the Financial 15 Index contracted by 0.11%, the Industrial 25 Index contracted marginally by 0.01%, and the South African Listed Property Index contracted by 1.15%. The Rand last traded at R16.61 against the U.S Dollar , R20.20 against the Pound , and R17.00 against the Euro . In local stock markets this morning, AngloGold Ashanti (JO: ANGJ ) released their H1 2022 financial results, while Impala Platinum (JO: IMPJ ) released a production update and trading statement for their full year ended 30 June 2022. AngloGold Ashanti reported a double-digit decline in its first half profit, citing increasing input costs such as labour and chemicals. The precious metals miner declared an interim dividend of R4.93 per share however, which represents a more than four-fold increase. Impala Platinum expects its headline earnings for FY2022 to contract by between 8% - 16% to R30.5 billion and R33.5 billion, and HEPS to contract by between 13% and 21% to between 3 669 cents and 4 030 cents. Yesterday, paper and packaging companies Mondi (JO: MNPJ ) (LON: MNDI ) and Sappi (JO: SAPJ ) contracted by 5.75% and 4.07% respectively. 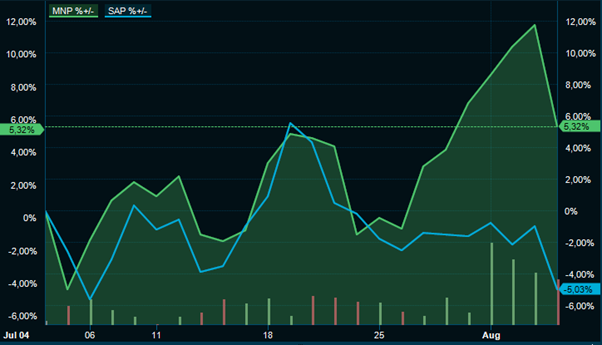 Across the globe, the S&P 500 closed the day 0.08% down, the Dow Jones dropped 0.26% from near an almost three-month high on Wednesday, and the Nasdaq closed the day up 0.44%. The FTSE 100 closed the day up 0.03%, the DAX closed 0.55% up, and the CAC40 closed 0.46% up. In Asian markets, the Nikkei is currently trading up 0.87%, and the Hang Seng is currently up 0.24%. The Bank of England raised interest rates by 0.5 percentage points to 1.75%, the biggest increase in 27 years and forecast inflation would hit 13% by the end of the year. Toyota (TYO: 7203 ) reported a nearly 18% fall in quarterly profits for April-June 2022 from the year before, as a semiconductor shortage continues to dent production. Today, the monthly U.S. non-farm payrolls report will be closely watched.