There is heightened uncertainty worldwide in the wake of the news of the new Covid-19 variant, Omicron (B.1.1.529). The travel ban against several Southern African countries will likely negatively impact the tourism industry and associated businesses as the summer months are the most important for this sector. From the agricultural side, the primary concern is the wine industry, which is currently in its rebuilding stages following the various bans on alcohol sales since the onset of the pandemic and the collapse of agritourism and wine routes tourism sales.

While there is a lot that remains unknown about this new variant at this stage, we do not foresee the new Covid-19 variant causing major changes in regulations and trading activity for much of the agricultural sector. After all, agriculture has largely been classified as an essential industry and has remained operational since the start of the pandemic. We will, nonetheless, monitor the potential impact of the travel bans and the general surge of the Covid-19 infections on the global supply chains. This is an important area for South Africa’s export-oriented agricultural sector.

Aside from these global factors and the ongoing pandemic-related uncertainty, South Africa’s agricultural sector has started the 2021/22 production season positively. The country is in a full La Niña swing, which is evident from the frequent higher rainfall that South Africa has received since the beginning of October. Consequently, the soil moisture has improved considerably across the country. That said, the western parts of the Free State, Eastern Cape and North West still require additional rain to enable planting. Last week, even regions of the Karoo received favourable rainfall, which will help improve the pastures and benefit the livestock in the province.

Farmers started planting in October in the eastern regions of South Africa, and progress has been good thus far. For example, over 80% of the intended area for maize and soybeans in Mpumalanga has already been planted. Similarly, eastern Free State farmers have planted roughly 75% of the intended area for maize crops. Meanwhile, the north-western Free State regions have planted around 30% of the maize area, and North West has only planted around 5% of the crop. The Eastern Cape and KwaZulu Natal is also progressing well with plantings. This planting progress is in line with the traditional planting window. For provinces west of the N1 (national road), the optimal planting window is between 15 November to the end of December, while the optimal window for the eastern regions is between 15 October and the end of November. This means that there is sufficient time for plantings to be completed in the western regions of N1, which have planted a minimal area of the summer crop thus far.

The downside of a La Niña weather event is heightened prospects of hail, which South African farmers should consistently monitor as this could damage summer crops, vegetables and the fruit industry. Over the past few weeks, various Free State and Limpopo regions received heavy rains and winds. Fortunately, there has not been significant damages reported by Agbiz members in these regions. If the winds and rains remain moderate, with no hailstorm, then we can confidently say that South Africa is heading for yet another good agricultural season in 2021/22, all else being equal. This is an optimistic view for crops that we zoomed into in this commentary and all subsectors of agriculture.

The current La Niña weather event, which is favourable for the Southern Africa regions, has brought dryness in various regions of South America. We continue to receive reports of crop damages in areas planted early from analysts on the ground in Brazil specifically. Depending on the scale and persistence of dryness, this could affect global grains and oilseed supplies and, after that, prices, as we previously discussed. As such, we maintain our view that global agricultural commodities will remain somewhat elevated in the coming months. Such price trends, combined with possibly higher yields in South Africa, would help slightly offset the high input costs farmers incurred at the start of the season.

In sum, the global economy is back in a state of heightened uncertainty caused by the new mutations of Covid-19. The South African tourism industry and associated businesses such as wine will be negatively affected by the reduced travelling going into the festive season. But the broader agricultural sector will likely remain robust, with significant risks being potential hail due to the La Niña weather event and possible disruption in the global supply chains. 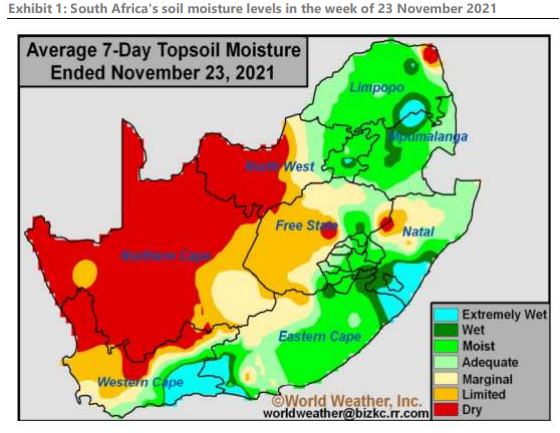