U.S. Treasuries appear to be treading water. That's keeping yields on the 10-year benchmark at about 1.60% despite the usual fluctuations.

Investors have priced in robust economic news, but a bullish unemployment report on Friday could blow them out of the water if there is progress not only in the headline rate but in the broader rate that includes labor participation .

Two measures of manufacturing activity were released on Monday, sending mixed messages. The ISM Manufacturing PMI fell short of expectations at 60.7 instead of a forecast 65.0, compared to 64.7 in March, while the IHS Markit Manufacturing PMI nearly matched forecasts at 60.5, about the same as in March. 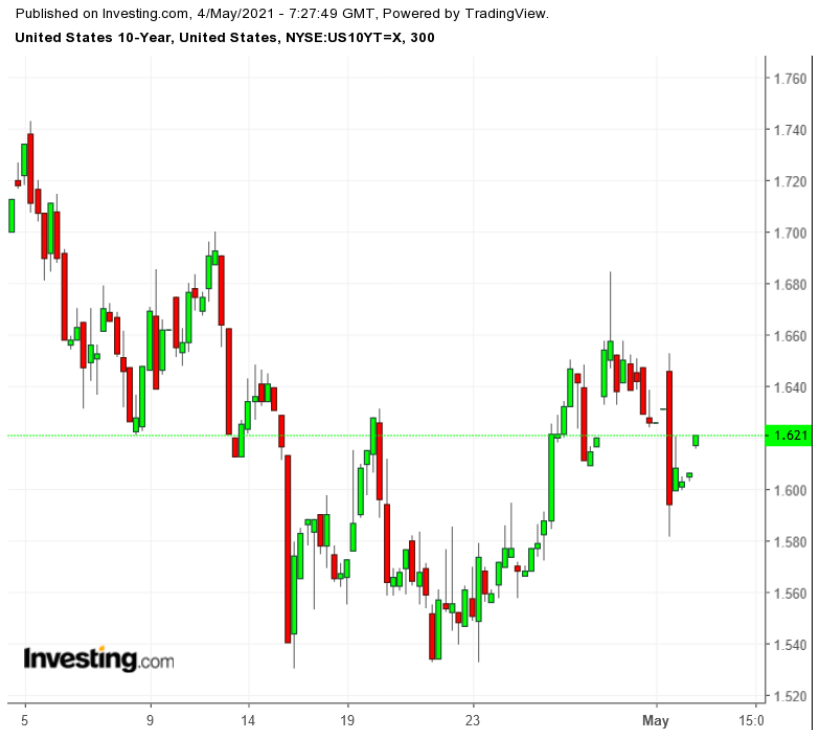 The news sent the 10-year yield plunging to 1.58% from 1.63% in early trading, but the notes recovered to about the 1.60% level. This is still a loss of 3 basis points on the day but the quick bounce-back shows investor resistance at that level.

Supply chain bottlenecks are clearly hindering manufacturing activity, but anything over 50 in the manufacturing indexes indicates expansion. Stocks powered ahead on anticipation of reopening the economy.

The murky manufacturing data sharpened the focus on the upcoming jobs report, which analysts consider to be a more accurate indication of where the economy is headed. There is no question that manufacturing demand is surging, but disruptions and shortages are dampening activity.

If manufacturing is limping, restaurants and hospitality are expected to power a jump in employment. Consensus forecasts for adding jobs are at about 975,000, but many economists anticipate adding a million or even more.

On the political front, President Joseph Biden’s multitrillion dollar spending packages are beginning to encounter some headwinds in Congress, even among Democrats. House Speaker Nancy Pelosi, with the narrowest of majorities, has set a July 4 deadline for the $2.3 trillion package that includes infrastructure spending—indicating weeks of debate and compromise in a timeline that may prove ambitious. Another Biden package of $1.8 trillion for education, childcare, and other family support would come up later.

Senate Minority Leader Mitch McConnell, the Kentucky Republican, said on Monday that his party’s support for the combined $4.1 trillion spending would amount to zero. Republicans are pushing for a more modest $600 billion spending plan that focuses on roads, bridges, airports, and other projects that fall under the more traditional conception of infrastructure.

West Virginia Senator Joe Manchin, a Democrat, has also expressed concern about the amounts of spending involved in the Biden packages. Democrats need all 50 of their votes in the Senate against a united Republican front if they want Vice President Kamala Harris to cast the tie-breaking vote, so Manchin’s opposition is significant.

He also opposes using the so-called budget reconciliation process that allows Democrats to pass bills on partisan lines even with the filibuster, as well as opposing any efforts to significantly limit the filibuster itself.

The upshot is there is considerable doubt about the final amount and timing of further spending packages following the March passage of the $1.9 trillion in measures aimed at relieving the impact of COVID-19.

The Treasury Department Monday announced plans to borrow $1.3 trillion over the final two quarters of the fiscal year, ending Sept. 30, bringing the total for fiscal 2021 to $2.3 trillion. The passage of the COVID relief bill quintupled borrowing plans for the current quarter to $463 billion from the original $95 billion it had estimated. Treasury has estimated fourth-quarter borrowing at $821 billion. Passage of further spending legislation could boost borrowing estimates.

These are big numbers, and it remains to be seen if politicians or voters will countenance this kind of spending and borrowing if the economy seems to be roaring ahead on its own.

The other unknown is inflation . There are reports of price increases not only for commodities but also for products hit by bottlenecks. Services like trucking are also increasing prices amid strong demand, while incomes are surging ahead.

Historically, this would be seen as a recipe for inflation, but policymakers at the Federal Reserve are insisting that any uptick in prices will be “transitory.” Just how tolerant investors will be of higher inflation–transitory or not–also remains to be seen.