U.S. Treasuries have traded in a narrow range over the past week despite harrowing inflation data that should give investors pause. Is this the calm before the storm?

There was a considerable hullaballoo over the consumer price index on Wednesday, as the April figure shot ahead 0.8% from March, instead of the 0.2% gain forecast, while the jump over 12 months was 4.2% instead of the 3.6% consensus forecast.

Less noticed was the sharp increase in the producer price index , which registered a 0.6% gain on the month, double the 0.3% expected. For the 12 months, the PPI was up 6.2%, the biggest increase since the government started tracking this data in 2010, and well ahead of the 3.8% that was expected.

Other price data reported last week was a 10.6% increase in import prices on the year—the highest jump in a decade—and a 0.7% increase on the month.

On Monday, the New York Fed reported that the index for prices paid in New York State’s manufacturing industry hit a record high 83.5, a gain of nine points on the month. Prices received also hit a record, rising two points to 37.1. (These price measures are different than the headline index, which measures general business conditions.) 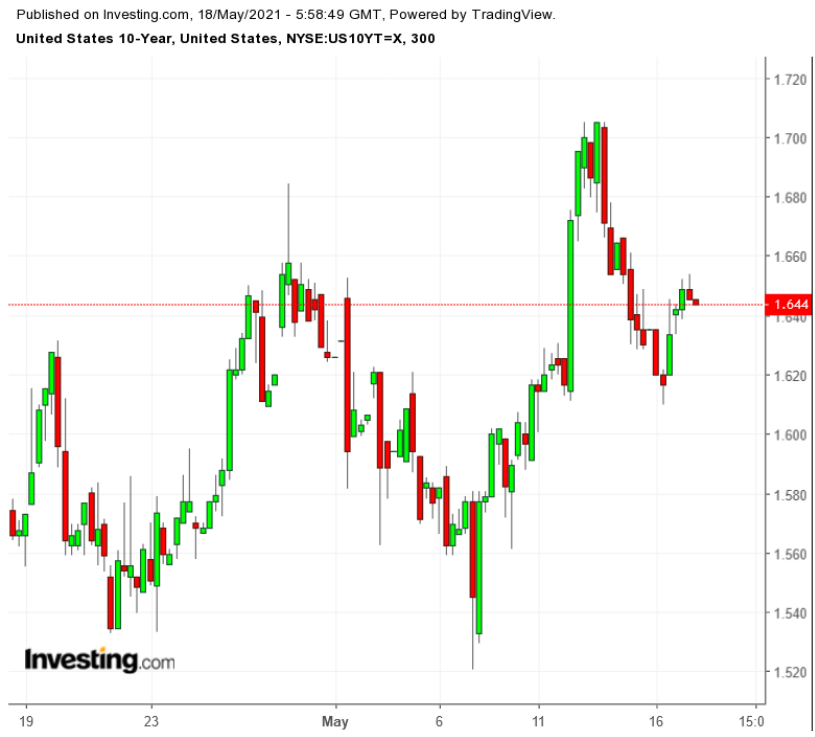 Yield on the benchmark 10-year Treasury note spiked above 1.7% on last week's CPI data, but has since retreated to 1.64% after dipping at one point Monday to nearly 1.61%.

Federal Reserve policymakers multiplied their appearances with the same message of the past few weeks—spikes in inflation or transitory and the Fed won’t tighten monetary policy anytime soon.

But investors are less sure than Fed policymakers that inflation gains are temporary and could well bolt if the trends established last week continue over the next couple of months.

Some economists are arguing that even if the current five-year breakeven is 2.5% and seems “anchored,” futures prices should be reflecting a monetary tightening sooner than the 2023-24 timeframe currently indicated. After all, even allowing for a time above the Fed’s target of 2% for some time to produce an average 2% inflation could call for earlier Fed action, especially if the upward trend remains steady.

In Europe, Italy led a selloff of eurozone sovereign debt as investors worried the European Central Bank would slow down its emergency bond purchases as COVID-19 vaccines becomes more widespread and lockdowns ease. 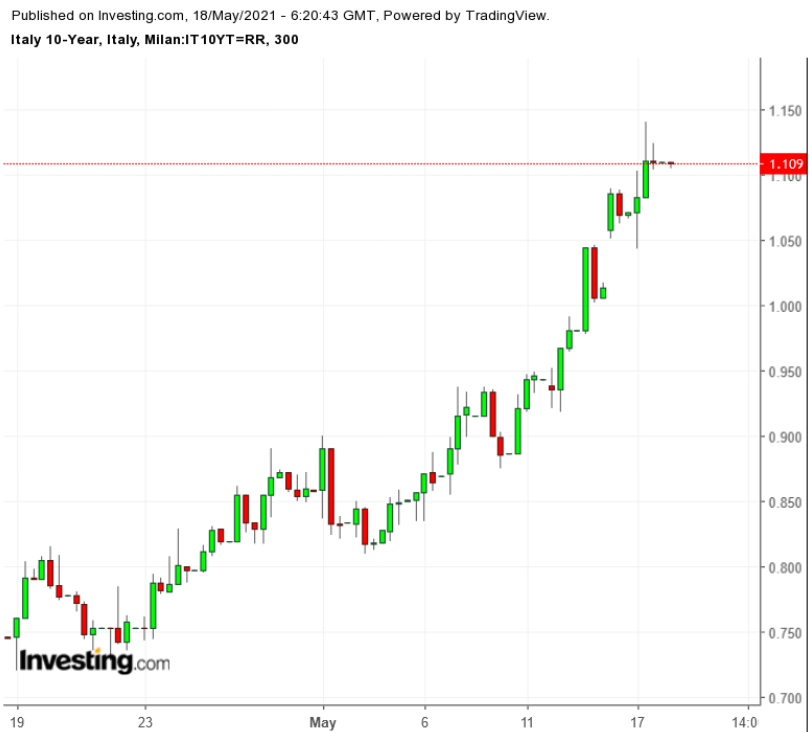 Yield on Italy’s 10-year bond rose about 3 basis points on Monday, after climbing 16 bps last week. The yield settled at about 1.10% after briefly hitting 1.13%.

Matteo Salvini, leader of the right-wing League, further dampened sentiment when he said Saturday that Prime Minister Mario Draghi’s so-called unity government is not so unified and would have trouble enacting reforms demanded by the EU to receive aid from Brussels’ recovery program.

Salvini added he would be happy to elect Draghi as president when parliament votes on the post in early 2022, but he doesn’t think the former head of the European Central Bank will be able to push through the needed reforms, especially if his taking on the presidency leads to the collapse of his government.