Of course, early is a relative term since that means late 2022 in the world of Treasuries, whereas Fed policymakers are tipping early 2024.

Yield on the 10-year benchmark Treasury note wobbled on Monday, as longer-maturity yields stayed flat. The 10-year note yield spiked to nearly 1.74% before sinking to 1.704% in late trading. 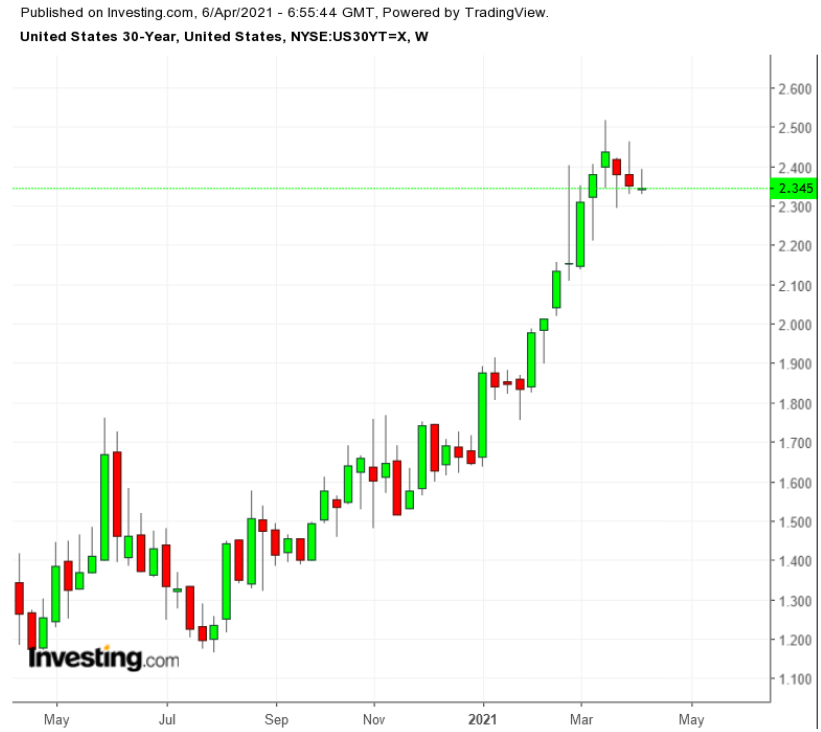 The 30-year bond rose near 2.39% before settling at 2.35%. The yield curve steepened slightly as the spread between two-year and 10-year notes widened to 153 basis points.

The Labor Department’s monthly report on nonfarm payrolls Friday showed the US economy adding 916,000 jobs, significantly higher than the 675,000 in the consensus forecast. That led the 10-year note yield to spike 5 basis points, to about 1.72%.

The $2.25 trillion spending plan announced last week by President Joseph Biden, which has been driving much of the sentiment on inflation and rates, ran into a roadblock Monday in the form of opposition from two Senate Democrats.

In the 50-50 Senate, Democrats need to have every one of their votes if they want to push through legislation without compromising with Republicans.

West Virginia’s Joe Manchin said the plan’s hike in the corporate tax rate to 28% to offset the spending is a nonstarter for him, hinting that other Democrats have similar reservations. Virginia’s Mark Warner, a former businessman, said he will have to have more input before he can support a spending bill, suggesting he has some concerns with the current plans.

In any case, it’s looking increasingly like the plan will have to be broken into separate bills to gain passage.

In Europe, some governments have started to limit hedge fund bids on bonds as inflated offers are misleading issuers about underlying demand. The suspicion is that hedge funds are overstating their demand in order to end up with what they really want as the European Central Bank dominates the secondary market with its asset purchases.

France, Spain, and the EU itself are reportedly putting a damper on hedge fund orders in syndication as issuance across Europe reaches record levels. ING says eurozone governments issued €373bn in the first quarter, including both syndications and auctions, a gain of 20% over the year-ago quarter. The demand has enabled governments to borrow at ever-lower rates.

The selloff in US Treasuries has slowed down the pace somewhat as investors began to worry about inflation, but analysts don’t expect that hesitancy to last.