Yields on the benchmark 10-year Treasury are in a holding pattern after receding from highs last month as investors await the first clue as to how fast the U.S. economy is growing when GDP for the first quarter is released on Thursday.

The Federal Reserve meeting on Tuesday and Wednesday is not expected to produce any changes in monetary policy and little change in the tenor of Chairman Jerome Powell’s remarks , which will convey optimism about the economy but concern about the remaining risks and the need to maintain easy money until maximum employment is reached. 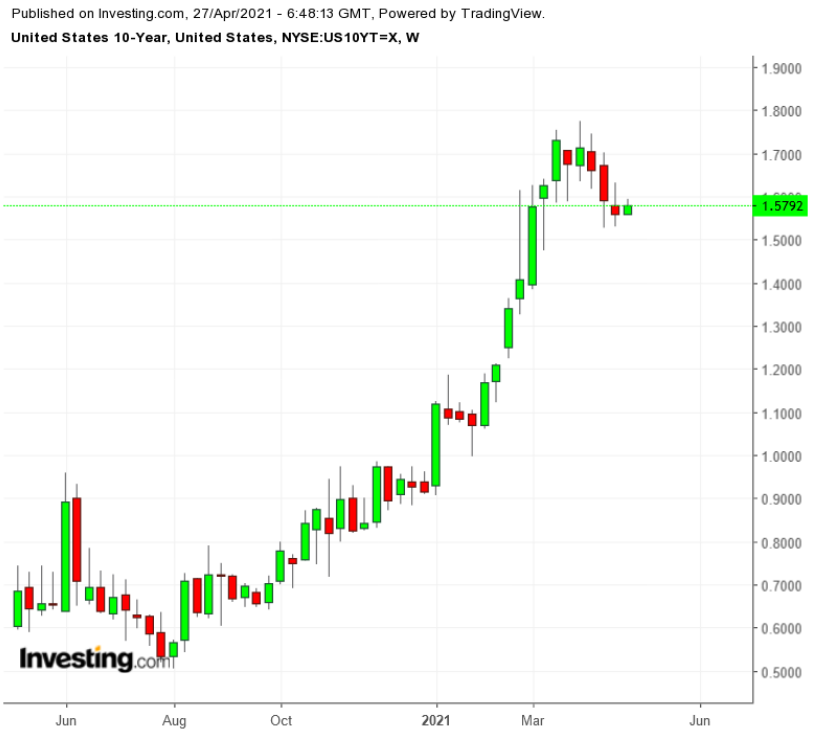 Wells Fargo analyst Michael Schumacher told CNBC that the 10-year yield could hit 2.1-2.4% by year-end, which he considers an aggressive forecast. Larry Lindsey, the former director of the National Economic Council, is more aggressive, however, predicting 3% by the end of this year.

For now, that benchmark yield is oscillating between 1.5 and 1.6%, with a spike above that range a week ago.

If GDP growth comes in much higher than the consensus 6.9%, or new jobless claims come in significantly lower than the 550,000 forecast, investors may react, anticipating stronger increases in inflation if the economy is running hotter than expected.

Meanwhile, the European Central Bank is following through on its pledge to speed up its emergency bond purchases to support the lagging European economy. The ECB bought a net €22.25 billion in the week to Apr. 23, an increase of more than a third from the previous week and the largest since end-June.

As in the U.S., the 10-year bond yield in Canada has risen sharply in the past several weeks and has now plateaued at just about 1.5%.

Meanwhile, Germany’s prickly Constitutional Court gave a green light to Berlin’s ratification of the European Union recovery plan, which entails the EU issuing €750 billion in bonds in its own name, a novelty that German euroskeptics challenged. The court briefly paused the ratification but now is letting it go ahead, while indicating that it is keeping a close eye on how much control Berlin has over its liabilities.

Germany is very sensitive to the issue of mutualization of the debt, which could leave German taxpayers on the hook for nonpayment by less conscientious countries—which for them means virtually every other country in the EU.

Yield on the German 10-year bond, which functions as an ersatz benchmark for the EU, has risen sharply in the past couple of months, while remaining in negative territory. It was trading Monday at just a notch below minus 0.25%, compared with its 52-week low of minus 0.67%.

More than a year since it was first announced, only two-thirds of the 27 EU member countries have ratified the EU recovery plan, making it a tight fit for Brussels to start selling bonds in June and disbursing funds in July. If the EU performs as usual, it may be after the August break before any serious funds are raised or doled out.