The US  consumer price index showed a lower month-on-month increase than expected—0.3% instead of the 0.4% in the consensus forecast—leading bond investors to adjust their expectations about when the Federal Reserve would start tightening monetary policy. The year-on-year rise came in as forecast at 5.3%.

Yields on Treasuries had risen Friday following an 8.3% spike in the producer price index , but receded on Monday and fell again after the CPI report was released. Yield on the 10-year benchmark dipped to 1.263% before recovering to 1.273%, down more than 5 basis points on the day. 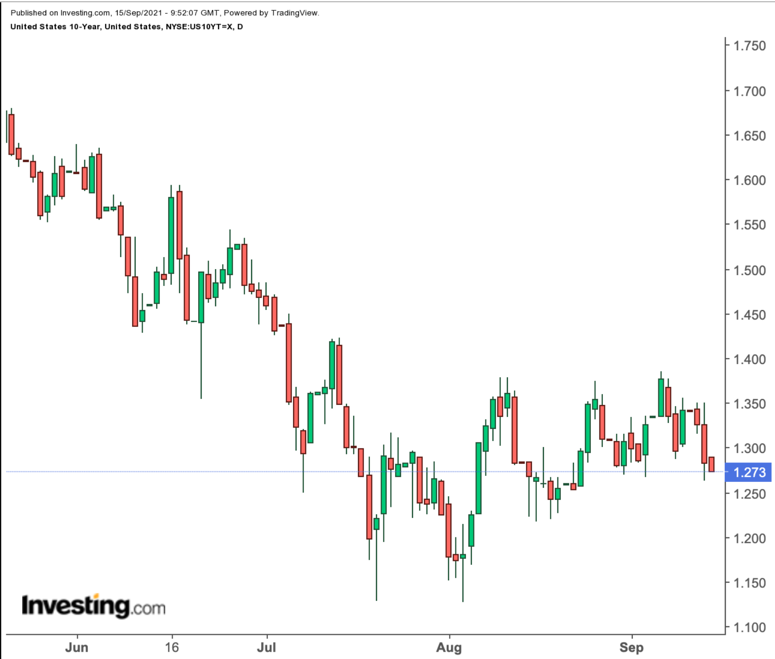 Investors who had been expecting the Fed to lay out a timeline for reducing its bond purchases after the meeting of the Federal Open Market Committee next week now think policymakers may wait until the meeting Nov. 2-3 to announce tapering plans.

The meeting next week, however, will show the quarterly updates on FOMC members’ projections of inflation and interest rates.

The falling Treasury yields indicated growing skepticism about reflation as a resurgence of COVID-19 infections seems likely to slow economic recovery. The jobs report earlier this month showed only 235,000 positions added, sharply lower than the expected 720,000, also raising doubts about how robust the recovery is.

Uncertainty about congressional action on the debt ceiling is also supporting Treasury prices, keeping yields low. The two-year debt ceiling suspension expired at the end of July and Treasury Secretary Janet Yellen is warning the government will run out of options for paying its bills sometime next month.

The exception is short-term Treasury bills maturing in late October/early November. Yields on these bills are running a little higher than those expiring in September or December even though default is highly unlikely.

Also looming is the Oct. 1 deadline for a new budget. Failure to pass it could theoretically result in a partial government shutdown, though Congress often relies on stopgap extensions. In the evenly divided legislature with fierce partisan clashes, however, it is difficult to predict who will blink first.

Add in the debate on President Joe Biden’s $3.5 trillion spending plan—which Democrats hope to pass without any Republican votes—and you have a September fraught with political risk from fiscal issues.

Investors in eurozone bonds also welcomed the US inflation news. Yield on Germany’s benchmark 10-year bond came off two-month highs to dip to minus 0.345% after the US CPI report. The yield had risen to nearly minus 0.3% after a new tranche of two-year bonds failed to attract much demand.

Germany is facing the prospect of a Social Democratic chancellor as former Hamburg mayor Olaf Scholz and his party are leading in the polls with the national election less than two weeks away.

If the polls are correct, the governing coalition will have to include three parties for the first time in postwar history, and Scholz would become only the fourth center-left chancellor. It is conceivable that the center-right Christian Democrats could head a government even if the party came in second, depending on how possible coalitions align on policy.

Italy had more success with new tranches of three, seven, and 30-year bonds, raising a total of €5.75 billion, and enabling the yield on the benchmark 10-year bond to slip about 3.5 basis points from late trading Monday to about 0.65%.