It was not a severe sanction though. It still allowed U.S. banks and institutional investors to trade the domestic bonds in the secondary market. It followed the ban on buying non-ruble sovereign bonds in the primary market imposed in 2019.

But the new sanction injected a note of uncertainty into the future of Russian bonds including the benchmark 10-year sovereign. 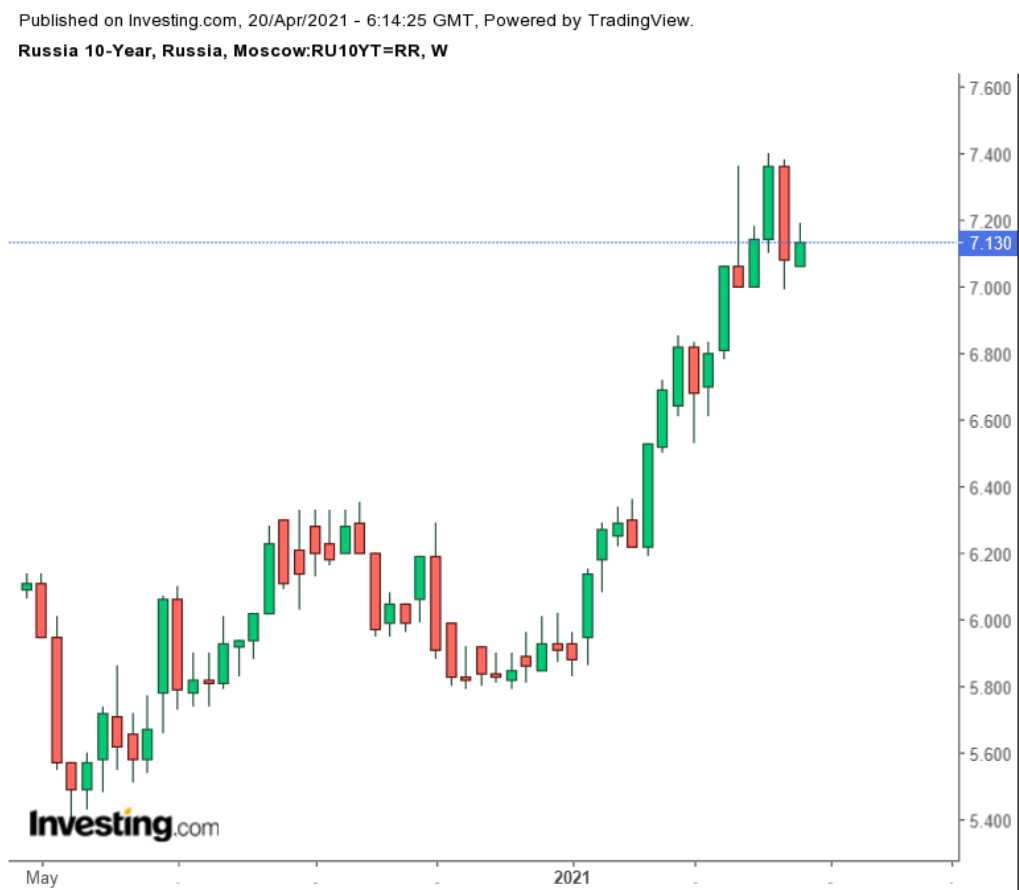 Some market participants had feared a ban on secondary trading, which would have damaged emerging market funds a lot more. Such a measure may still be on the table and that fact alone will make U.S. money managers cautious.

Russia has been massing troops on the Ukraine border and limiting access to parts of the Black Sea and the Sea of Azov, affecting much of the Ukraine coast. President Joseph Biden called Russian President Vladimir Putin a “killer,” even though he subsequently decided against sending U.S. warships into the Black Sea. The UK then obliged by sending an aircraft carrier and a frigate there, while putting support weapons in the Mediterranean on alert.

Most visibly, Russia has been defying world public opinion by jailing its leading regime critic, Alexei Navalny, until yesterday denying him the medical care he seeks, and letting him continue a hunger strike until he is near death. All this after poisoning him last year.

The new limits on purchases of Russian bonds demonstrated once again the enormous power the U.S. exerts over global financial markets. This was not an example of the “exorbitant privilege” the U.S. enjoys from being the issuer of the main reserve and trade currency, but it drives home the country’s status of having the deepest, most liquid financial markets and the most sophisticated pools of capital.

Russia’s dollar-denominated bonds also took a brief hit, bouncing back after the limited extent of the sanctions became clear.

China has been busy spreading money around to have economists, academics, and journalists shill for them, claiming the renminbi is about to replace the dollar as the international currency of choice, just as a U.S. in decline is losing ground to an ascendant China. Wishful thinking from the Asian nation, at best.

Russia makes no such pretense. Rather, it uses its oil and gas and military to club Europe into line. It is a strategy that is working as the European Union falls ever further behind in integrating politically and militarily, let alone financially. The euro , like the renminbi, is still decades away from rivaling the dollar, let alone replacing it.

In the meantime, this global tension seems to have little impact on U.S. Treasuries. China is highly unlikely to sell off any of its more than $1 trillion in U.S. debt or even to stop buying Treasuries as their reserves grow. They don’t have many options (this is exorbitant privilege).

For one thing, selling off Treasuries would only reduce the value of China’s remaining reserves. It is an extravagant example of the quip attributed to John Maynard Keynes: If you owe your banker a thousand pounds, you are at his mercy; if you owe him a million pounds, he is at your mercy.

Treasury yields rose on Monday, with the yield on the benchmark 10-year rising back above 1.6% after dipping below 1.53% last week. Investors are focused on Wednesday’s auction of $24 billion in 20-year bonds to gauge demand for the longer-term securities as the Federal Reserve’s attempts to allay fears of inflation meet a mixed reaction.