Visa (NYSE: V ) is a global brand, but it seems like a procyclical company, with revenues tied to global demand. So, it might be surprising that it outperforms the S&P 500 in a global crisis. Yet, Visa enjoys quite a few long-term secular drivers that enable reliable above-GDP growth. 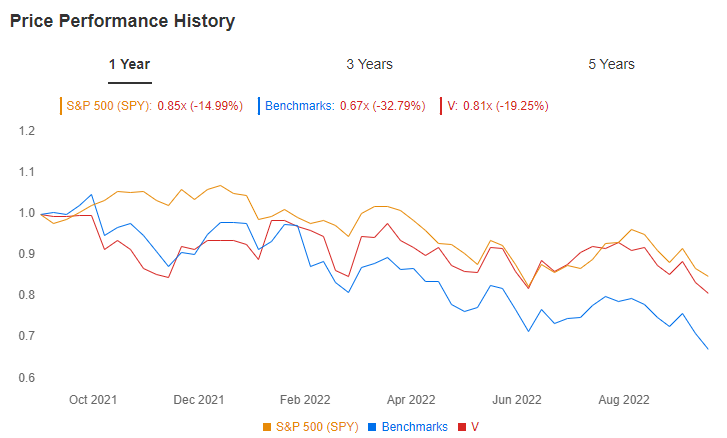 This year’s performance bears it out. Visa is down 14.23% so far this year. In comparison, the S&P 500 is down 21.01% and the NASDAQ 100 is down 29.42%. Despite the losses, it remains a top-15 performer among mega-cap stocks. With a recession- and inflation-proof business model, the payment network has outperformed the market in times of crisis ever since its IPO in March 2008. It will likely continue to do so.

Visa’s performance is driven by its highly defensible business model characterized by recurring revenues, high incremental margins, and high free cash flow. While COVID-19 has significantly impacted near-term growth, its business model is resilient in the face of inflation and has proven to outperform in times of turbulence.

Visa’s main driver is the global switch from cash to card payments. Card penetration worldwide remains at only 54% and is growing 2% a year, meaning that Visa has an additional $11.6 trillion in yearly spending to tap. This trend is only set to accelerate, especially with the rise of online shopping.

As you can imagine, Visa is highly dependent on Personal Consumer Expenditure (PCE). As consumers increase their spending, the number and value of transactions on which Visa can charge a fee also increases. You might be thinking that this factor would surely drag Visa down in times of doom. Surprisingly, PCE has grown 3% above GDP for the last 20 years, through both recessions and booms. So, even if the global economy were to contract, by say 1%, PCE would still be growing at 2%.

Inflation is another one of Visa’s drivers. The payment network makes a fixed percentage on consumer transactions, therefore, as the value of those transactions goes up, so does Visa’s fee. So, no matter how high inflation remains in the coming years, Visa will be able to convert most of that into revenue growth.

The last driver is real pricing growth. Despite none of us noticing (because network fees are paid by the seller) Visa quietly ups their fee by roughly 1% a year, always finding new ways to disguise the increase.

So, through the sum of its drivers, Visa grows its revenue at an average of 9-10% a year. Of the company’s four drivers, only PCE would suffer in case of a global recession, while the rest would continue to grow at their usual pace. 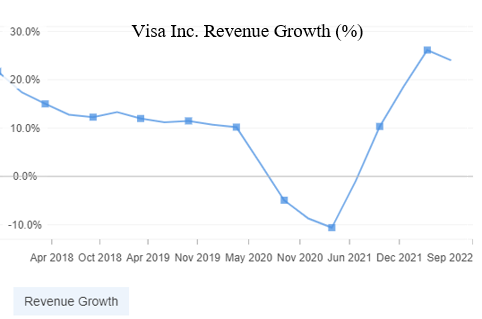 Given the not-so-promising outlook and the calls for recession, it is normal to question the stability of Visa’s growth in the short term. A global crisis would most definitely impact the payment network, but there are two cushions to be aware of.

Travel spending is one of Visa’s cash cows. When you spend abroad, fees are much higher: take rates are 6x or more than in standard domestic transactions. The relaxation of travel restrictions has allowed Visa to manage fairly well despite the late macro turbulence, as spending abroad reached unprecedented levels. While some believe the boom is already over, it seems too quick of a call given that China and Japan – which represent 15% of cross-border payment volumes – remain closed. As of now, APAC is tracking at only 70% of 2019 travel spending levels; there is plenty of runway left as the rest of the world is already at 180% compared with 2019.

The second cushion is far more interesting. A payment network in its most basic form is simply a server, meaning that computers represent a large chunk of Visa’s capex. What’s special about computers is that every two years technology enables us to make them twice as powerful and at half of the cost, as dictated by Moore’s Law (Gordon Moore, co-founder of Intel (NASDAQ: INTC )). If computer capacity quadruples every two years at the same cost but transactions only grow by 9-10% a year, payment networks can cut their computer capex every year while growing at their maximum capacity. Very few businesses – and, perhaps, none this big – can afford to cut costs substantially on a yearly basis without sacrificing growth. This puts massive upwards pressure on margins, which are at 68% (operating). But more relevant to now: when times get tough Visa can always slash its capex and protect its earnings with very few repercussions. A great example of this was during COVID. As you can see below, Visa brought its spending down from roughly $250 million to just over $150 million to weather the pandemic. 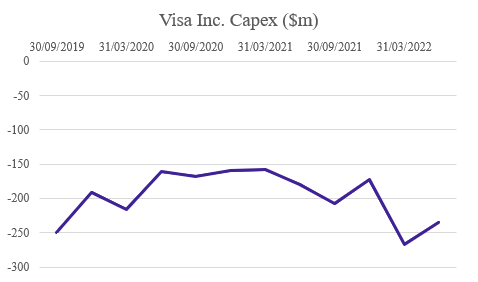 Is It Worth The Price?

All the advantages outlined above come at a price, of course. Trading at a 25.2x (fwd) P/E, Visa isn’t cheap. But Visa is never cheap. The question is whether it’s going to give you enough bang for your buck. 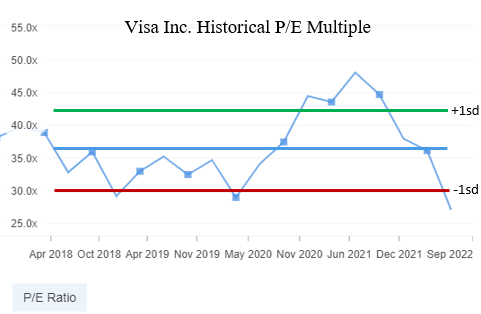 As shown above, Visa is currently trading at its lowest P/E ratio in the last five years. It is also more than one standard deviation below the 5-year mean; it would be difficult for the stock to get any cheaper. 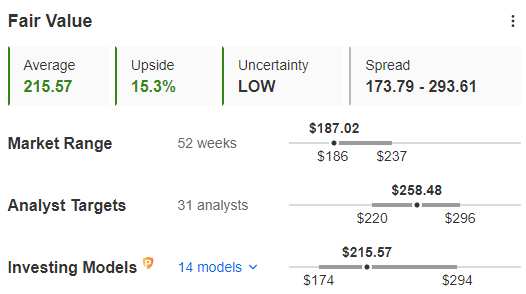 InvestingPro models show a possible upside of 15.3%, while the average analyst estimates 39% in gains. And this is in today’s rough market. With strong tailwinds and trading at a relatively low P/E, Visa seems like a resilient stock that is positioned well to outperform the market in these times of strong macroeconomic uncertainty.

Disclaimer: The author has no position in any stock mentioned.