Don't expect recent equity market volatility to fade in the week ahead. The upcoming trading week brings earnings results from some of the US's most watched mega cap tech companies along with the Fed's first policy meeting of 2022.

Adding to the possibility of mercurial market action, all the major indices—the Dow Jones , S&P 500 , NASDAQ and Russell 2000 —finished lower for the day and week, with the S&P and NASDAQ suffering their steepest weekly losses since the pandemic began in 2020 and the Dow seeing its worst weekly performance since October 2020.

The  Technology and  Consumer Discretionary sectors led the declines. As well, FAANG stalwart Netflix (NASDAQ: NFLX ) was pummeled on Friday after a weak earnings report on Thursday disappointed investors.

Shares of the streaming entertainment giant opened lower on Friday and just dropped—finishing the final day of last week's trade with a 21.79% loss. Although the former tech darling met analyst expectations, soft guidance turned the once-hot stock into a hot potato as traders raced to dump shares after the company conceded they were losing ground to the competition.

The company's percentage of market share becomes even more significant after the streaming giant recently increased its standard plan price to $15.49 from $13.99. 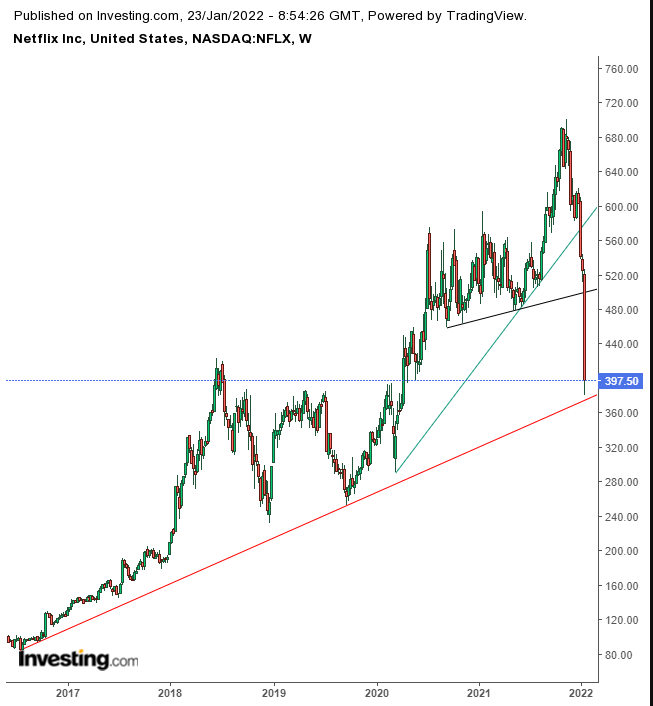 The stock broke a support that could have prolonged the sideways move. After the dramatic drop, we expect the long-term uptrend line since 2016 to now provide support.

The benchmark index for tech shares, the NASDAQ 100 , tumbled on Friday, losing 2.8% and underperforming all primary US gauges. For the week, the NDX fell 7.51%, making it the second-worst performer on a weekly basis after the small cap Russell 2000's 8.07% freefall. In contrast, the SPX 'outperformed,' dropping only 4.73%, followed closely by the Dow's 4.58% setback.

It appears that given the confusion of repricing an equity market that until now has been the beneficiary of the most accommodative monetary policy in history, the upcoming tightening has investors cashing out of both sides of the Reflation Trade. While blue-chip value stocks listed on the Dow were less affected, domestic firms listed on the Russell 2000 which rely on an open economy have suffered the most.

Plus, as we've noted previously, the technology sector tends to be the first casualty of higher rates since the expectation of future growth is generally what drives the shares. Thus, when the value of the currency in which the stock is priced escalates, the cost of buying the shares rises, making it less appealing.

As the Fed cuts back its stimulus and increases interest rates, we expect economically sensitive sectors to outperform. That's one reason  Energy is up 12.52% so far for the year. Indeed, it's currently the only sector in the green this year. However, although it's a cyclical industry, the price of energy shares has been dictated by oil supply and production disruptions more so than as a response to any global economic recovery.

Still, on a weekly basis, cyclical sectors outperformed, while technology lagged—with that level of performance for each extending into the past one-month and three-month periods.

This is all textbook actually. The Fed raises rates when inflation escalates, after prices go up when demand grows; as a result more jobs are created and salaries increase. The overheating economy tends to come with accelerating production, which boosts demand for energy, materials, and industrials. Financials benefit from rising rates, as they provide higher profit margins for loans and credit. It's natural, therefore, for specific sectors to benefit from this environment.

On the other end of the cyclical spectrum, technology stocks—which outperformed during the locked-down economy, stretching their valuations—tend to unravel as investors move their money to cyclicals, which now provide value, having been neglected up to this point.

Which makes this coming week's Federal Reserve meeting so important. Investors are searching for any additional policy clues that might help them up their market game. Currently, most economists are forecasting a quarter percentage point hike in March.

Also this week, traders will pay close attention to Thursday's US GDP print to make sure their portfolios are in sync with the economic trend. Investors will also be focusing on Friday's personal consumption expenditures data, which the Fed watches closely.

Investors will also be keeping an eye on Treasury yields, a leading indicator of upcoming interest rates. Last week the 10-year benchmark's yield touched the 1.9% level midweek, but retreated to 1.76% by Friday. 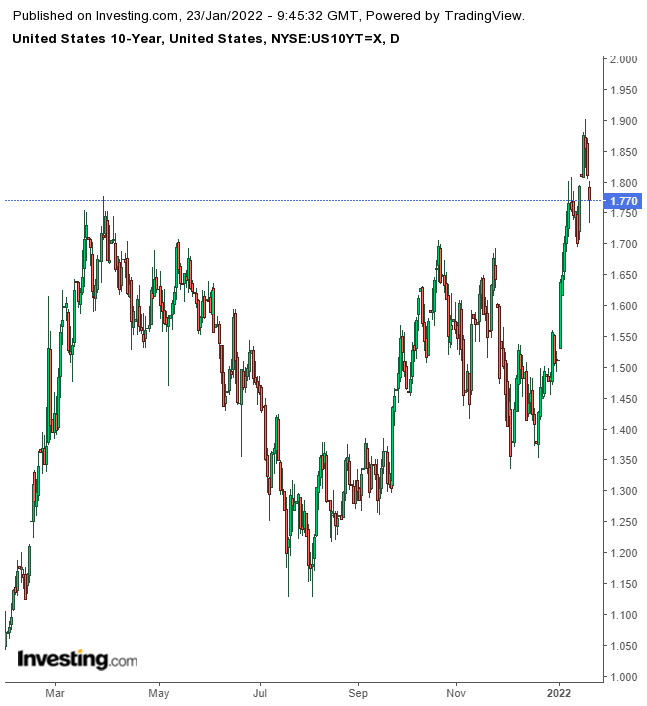 Technically, the volatility occurred at a crucial level. For now, yields respected the support for the March peak, suggesting a continued advance. If rates rise, they are anticipated to keep pressuring technology stocks while supporting cyclicals.

The dollar , too, had a volatile week. 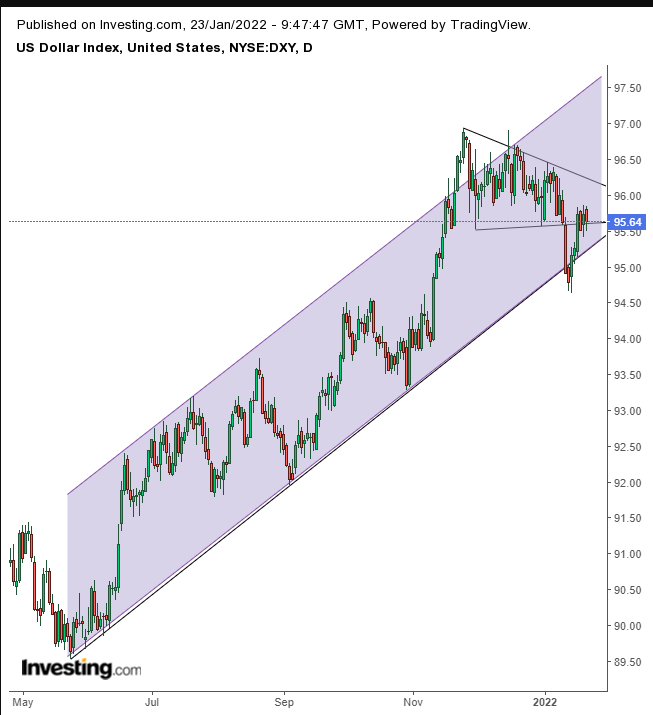 The greenback closed just back into its descending triangle, a pattern that demonstrates how sellers overcome buyers.

Gold rose for a second week, despite the stronger dollar. 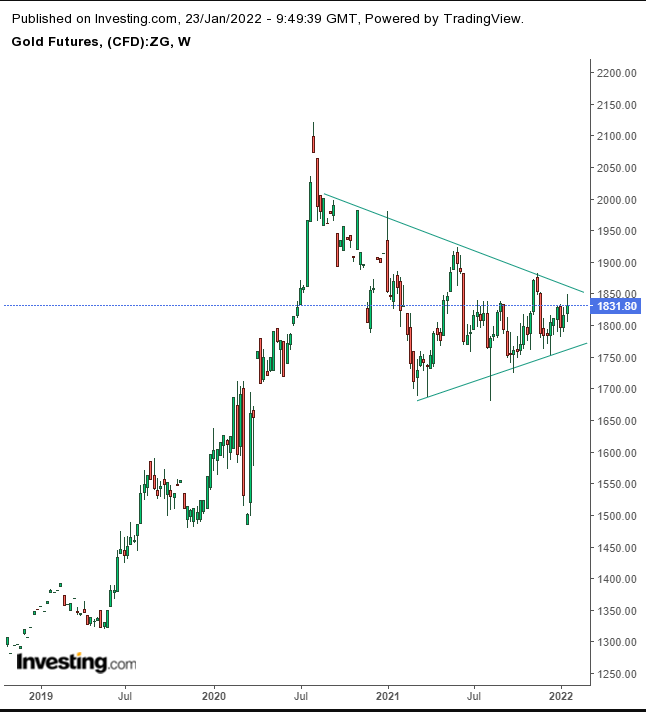 The yellow metal has been meandering within a symmetrical triangle, demonstrating that both buyers and sellers are about equally eager.

Bitcoin 's meltdown continued with the cryptocurrency losing 18.5% for the week. 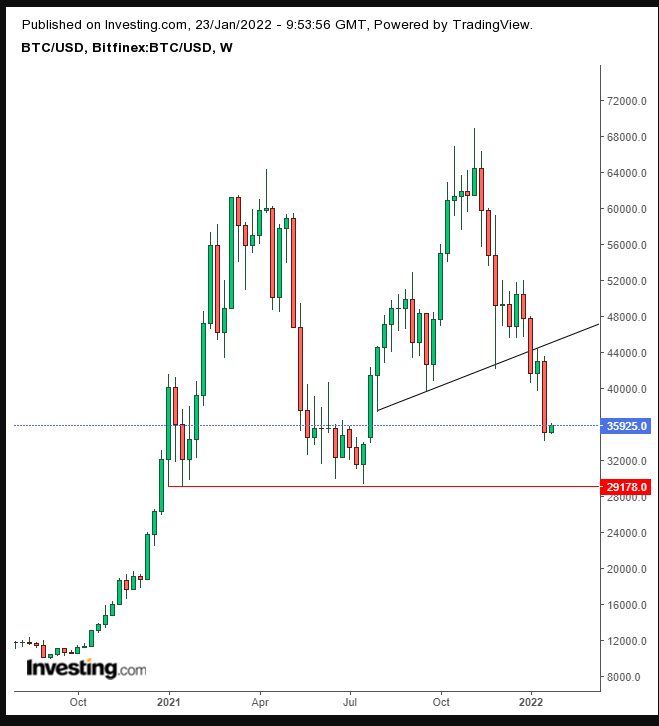 The #1 digital token by market cap, considered by some to be a 'store of value,' appears right now to be anything but. BTC/USD has now reached halfway to our $30,000 target. The odds are rising for a breakthrough at the $29,000 level, which raises the stakes for a much deeper selloff. 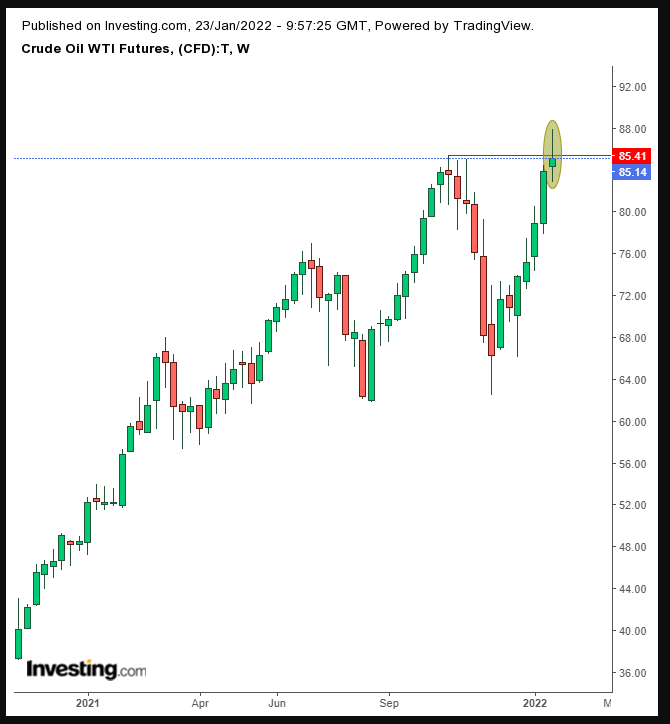 Technically, while WTI gained for a fifth straight week, the price developed a high wave candle, closing below the October peak. The candle indicates a loss of direction and fear. The fact that it closed below the October high weighs more heavily on bulls.