Investors will likely be split into two camps in the coming trading week. The optimists will no doubt focus on a continued market rebound, pointing to the S&P 500 which regained 5% last week; the Dow Jones which recouped 4%; the Russell 2000 which recovered 7% last week; and the NASDAQ which jumped 8.8%.

The pessimists, however, will keep paying attention to the fact that the US major equity indices have just gone through the worst first half of a year in over half a century. The SPX lost almost 18% of its value since the start of 2022 while the Dow is down 13% over the same period; the tech-heavy NASDAQ 100 has been gutted since the start of the year, having declined by 25.6%; and at the same time the small-cap Russell dropped by 21.4%.

In last week's post, we anticipated a possible short-term comeback for stocks after their protracted rout. Here's how that played out and what technicals are signaling next: 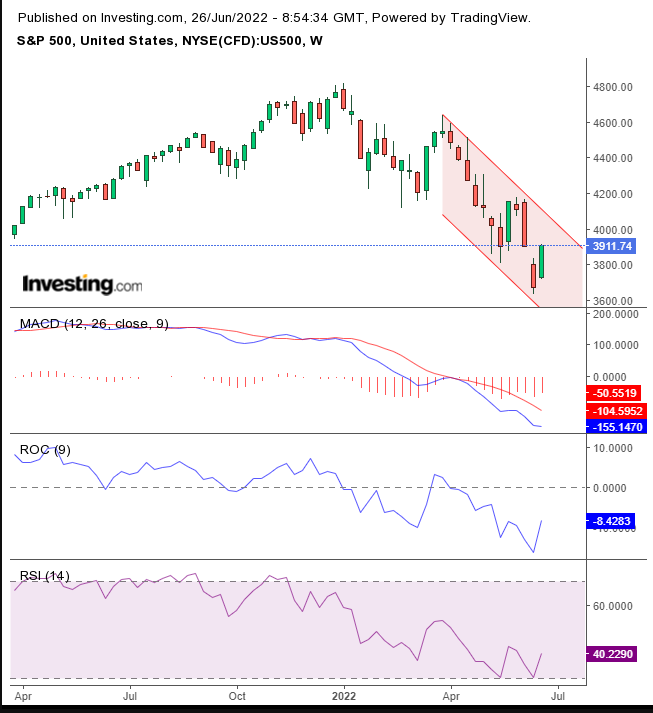 The S&P 500 bounced off its channel bottom. Although the index closed at the top of its weekly trading, it found resistance at the lows of four of the past five weeks. The price's inability to overcome those pockets of supply increases the odds of the end of the rebound.

Also, sellers are likely to ratchet up the pressure as the price nears the top of the Falling Channel. Still, indicators provide room for an upward movement before an oversold condition, aiming at the original downtrend line since the record peak.

The prospect of a stock market crash now could be particularly problematic for investors. Typically, bonds provide investor portfolios with an escape from steep equity declines.

However, Treasuries and other bonds are not offering better returns right now. Vanguard's Total Bond Market Index Fund ETF Shares (NASDAQ: BND ) is down 11.7% for the year, on track for its worst performance since inception in April 2007. 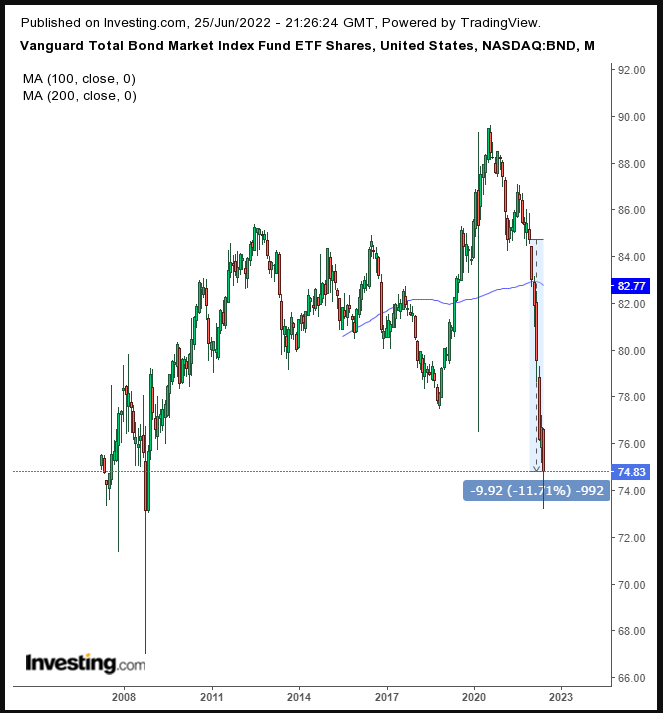 Having reached levels not seen since 2008, does the bond index fund have more room to drop?

That question brings us back to investor mindsets in the coming week. Will enough investors see last week's rebound as the glass half full, thereby providing additional momentum for a continued rally? As well, it pays to remember that bear markets are notorious for some of the sharpest rallies that then whipsaw rapidly and head lower, something that's frustrating for bears and bulls alike.

Alternatively, investors could remain focused on continued Fed tightening chasing after the worst inflation in over 40 years after a near-decade and a half of the loosest policy on record. And as if that weren't enough, additional headwinds haven't faded: the world is still contending with the worst global health crisis in more than a century and the Russian war of aggression in Ukraine which is also cutting into global food supplies.

One driver that could help bulls maintain last week's market advance, at least in the short term, is quarter-end rebalancing, when institutions draw on record cash levels to bring allocations to stocks back in line with their targets.

According to JPMorgan, portfolio rebalancing has the potential to boost stocks by 7% next week. If that scenario occurs, the S&P 500 could head back to the May highs.

Treasury yields, including for the 10-year benchmark note, have dropped. 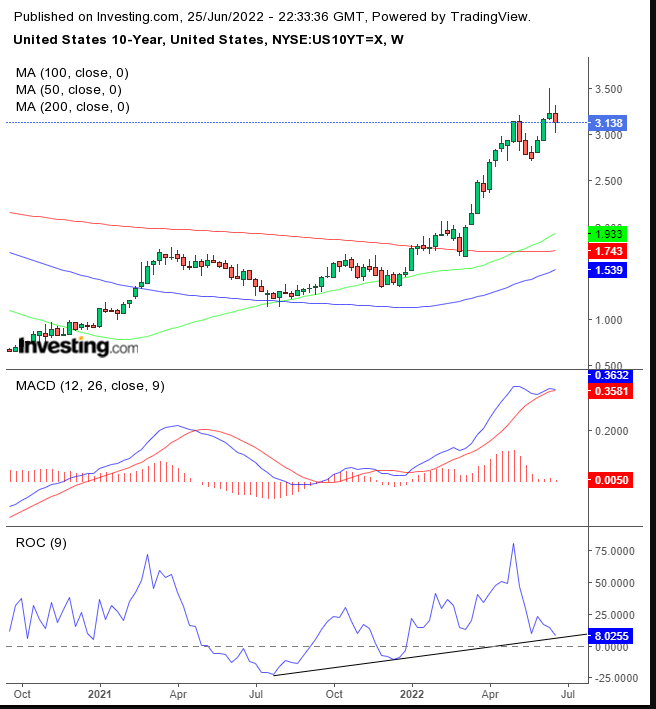 This confirms last week's exceedingly bearish Shooting Star with its exceptionally long upper shadow. On the other hand, the 50-week MA crossed above the 200 WMA in May, triggering a weekly Golden Cross for the first time since October 2017. Yields proceeded to rise nearly 50% in the following year.

However, we can see this ambivalence reflected in the MACD and the ROC. In the MACD, the short MA tests the long MA, while in the ROC, the indicator tests its uptrend line.

The dollar fell for the week, tracking yields. 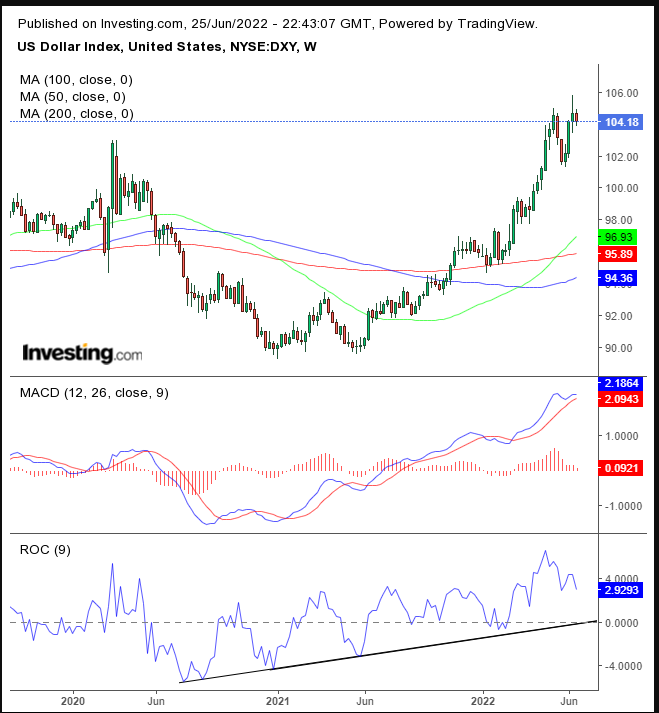 Like Treasury rates, the dollar developed a high wave candle that increased the chances of a reversal two weeks ago. Last week's red candle confirmed the High Wave candle's bearish nature. Also, like yields, the previous month's moving averages triggered a weekly Golden Cross, and the short MA tracked the long one. However, the USD's ROC is showing there's more room for a decline.

Gold slipped for a second week. 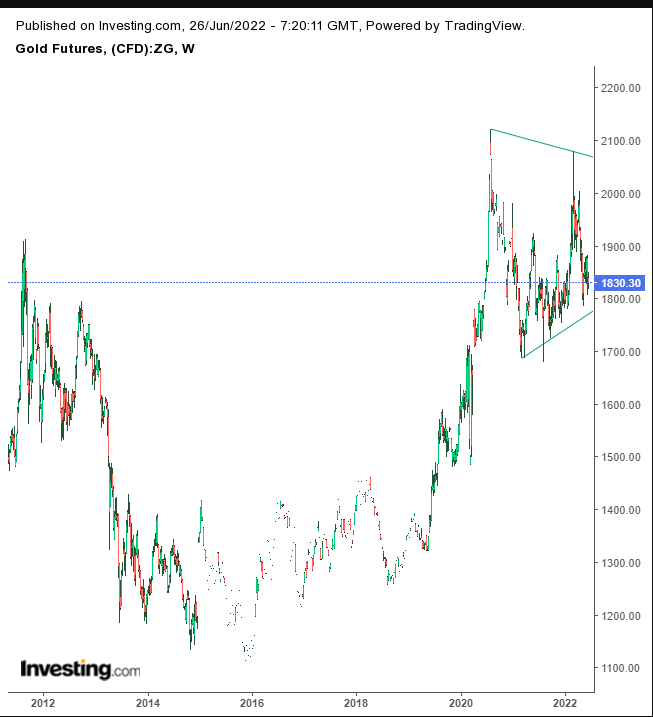 The yellow metal neared the bottom of a Symmetrical Triangle, whose bias may be upward within the underlying trend. Also, note the struggle between bulls and bears on the level of the previous all-time high in 2011.

After falling below $18K for the first time since 2020, Bitcoin found its footing last week returning to levels above $20,000. 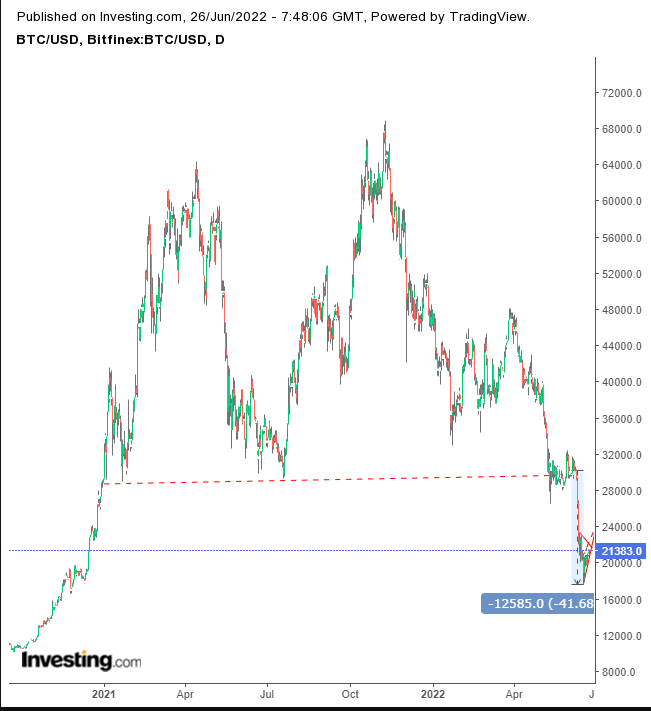 The largest cryptocurrency by market cap may be developing a continuation pattern, which would correspond with the digital token having completed a massive top—both of these patterns target a level below $10K. However, it's unclear whether this highly volatile asset will follow through with normal dynamics, which point at $12,500 from the point of the breakout of the small pattern and destruction if the massive top achieves its implied target. 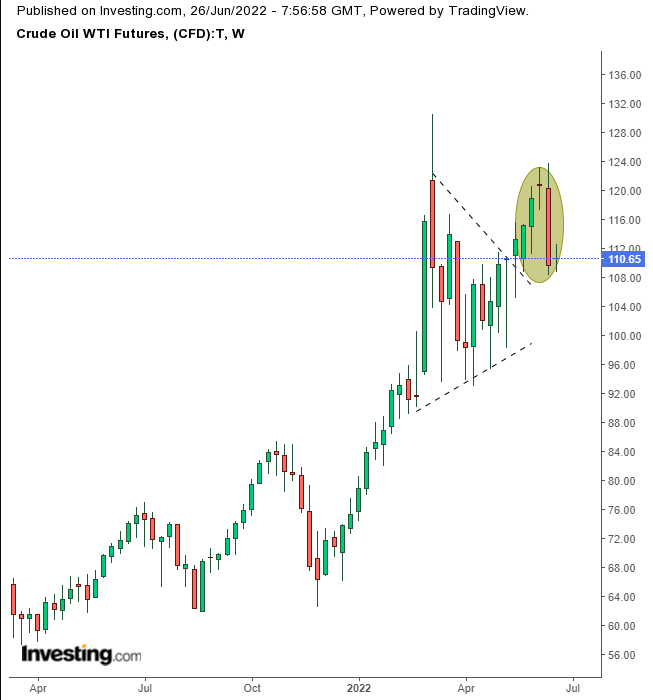 The three-candle stick pattern is especially powerful for two reasons. First, the third and final candle, which reverses the previous bullish move, erased not just one but three weeks' worth of gains. Second, it confirms the resistance of the March supply.

On the other hand, bears will face the bulls who already completed a bullish triangle.