With September already acknowledged to be a seasonally weaker month for equities, stocks are now also anticipated to be entering a period of potential volatility ahead of this week's FOMC meeting where the Fed is expected to provide more clarity on its next tapering moves. As well, investors have been growing jittery as "an alarming number of companies have warned that profits won’t meet expectations when they report in a month," noted Bloomberg on Saturday.

All of which could become the next group of triggers for more downside activity for the S&P 500 , Dow Jones and NASDAQ , which all closed lower on Friday.

Our natural inclination is to characterize the upcoming Federal Reserve meeting as “eagerly awaited.” However, it's dawned on us that that's exactly how we have been identifying each of the recent Fed meetings over the past few months.

It’s hard to signify just how 'eagerly awaited' every one of the recent Federal Reserve meetings have been, since, after years of QE, the Fed has been indicating it's ready to trim back stimulus and consider raising interest rates. Both actions are a big deal after such a lengthy period of easy money, and each announcement by itself could be dramatic enough to generate serious waves in financial markets—perhaps especially in September.

With all that in mind, a significant number of companies sought to soften the blow by preparing shareholders for the probability that profits could disappoint during upcoming earnings reports. Most of these companies are materials producers such as PPG Industries (NYSE: PPG ) and Sherwin-Williams (NYSE: SHW ).

The warnings come amid ongoing supply chain disruptions caused by the bottle necks resulting from COVID restrictions made worse by the escalating case count of the Delta variant. Though materials sector companies are just a small part of the broader S&P 500, according to Bank of America analysts, their results have a high, positive correlation to the other 10 SPX sectors.

For starters, these companies are sensitive to the economic growth. Their failings are a poor mark for the recovery which is already fragile as pandemic breakouts continue. Indeed, both Materials and Industrials underperformed on Friday, falling 2.1% and 1.1% respectively.

More worrying though, was the weekly view. Materials dropped 3.2% and Industrials slumped 1.6%. Moreover, on a monthly basis, Materials plummeted 4.4%, followed by Industrials’ 3.75% tumble. Over the course of three months, Materials fell 0.9%, with Industrials dipping 0.6%. The only other sector in the red across the same timeframes was Energy .

Materials and Industrials performed poorly even across a six-month wind down, each rising only 3%. Only Energy provided worse results.

On Friday, the S&P 500 Index dropped 0.9% as quarterly options and futures expired. Notwithstanding, the benchmark dropped below its 50-day moving average for the first time since June. 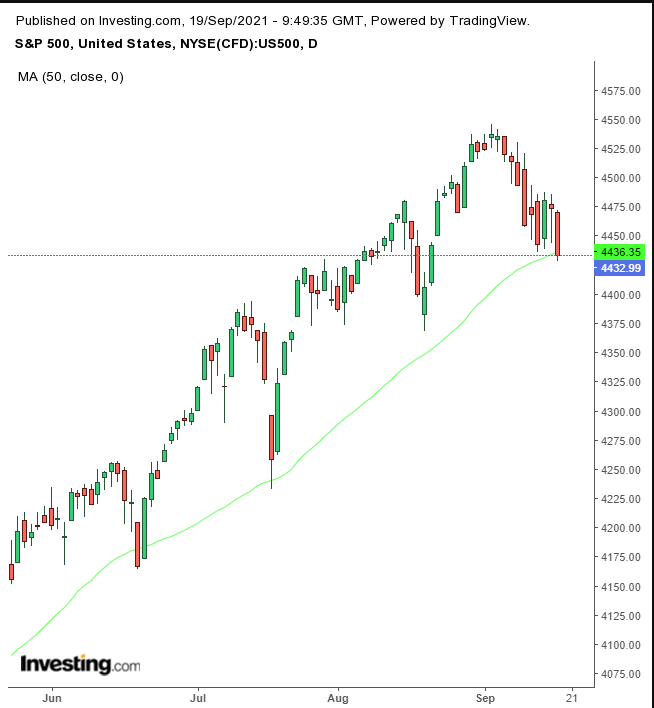 The 50 DMA has been a support since April 2020, after the infamous March 2020 equity market bottom.

That wasn’t the only benchmark in distress, however. Even the tech-heavy NASDAQ 100 suffered, rather ironic amid a reversal of the Reflation Trade, since its listed growth stocks should have boosted the index. Still, the NASDAQ 100 dropped 1.2% on Friday, its worst performance since May. But, as opposed to the S&P 500, it remained will above its 50 DMA.

If that weren't enough, there are still earnings to consider as the current season tails out. On Monday, homebuilder Lennar (NYSE: LEN ) will report. On Tuesday, FedEx (NYSE: FDX ) and Adobe (NASDAQ: ADBE ) release quarterly earnings.

While Adobe is likely to have benefitted from any shifts back to a work-from-home environment, FedEx's (NYSE: FDX ) business relies on the growth of physical commerce. Though consumers ramped up shopping from home during lockdowns, the Memphis, Tennessee-based parcel shipper is attempting to grow its business by cutting its SmartPost package service, which shares deliveries with the US postal service. It's looking instead to take over the entire operation, in order to maximize the number of packages it delivers.

Will these adjustments be reflected in FedEx's earnings report this week? Ahead of the release, the stock is flashing a bearish signal. 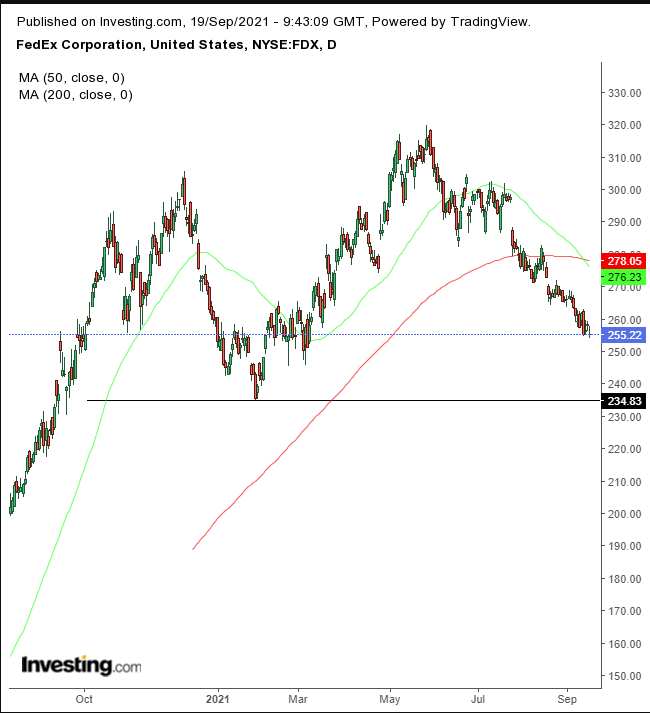 The 50 DMA crossed below the 200 DMA, triggering a Death Cross, suggesting the stock may be about to top out.

On Thursday, Costco (NASDAQ: COST ), Nike (NYSE: NKE ) and Darden Restaurants (NYSE: DRI ) release earnings reports. Dell Technologies (NYSE: DELL ) hosts an analyst meeting the same day. It's not clear if good news from all concerned will boost skittish equities, but it's more than likely any negative news will weigh on stocks.

Another key market driver will occur on Wednesday, when Federal Reserve Chair Jerome Powell gives his regular, post-FOMC briefing . The major question is whether he'll manage to soothe worried investors, without flip-flopping on a timeline for paring Fed’s stimulus?

On Friday, Powell will speak via webcast on "Perspectives on the Pandemic Recovery." If history is a guide, this may be when he backtracks on what he said during the FOMC statement.

This past Friday, Treasuries, including the 10-year benchmark, dropped for a third day, tracking the two-day selloff of the S&P 500. 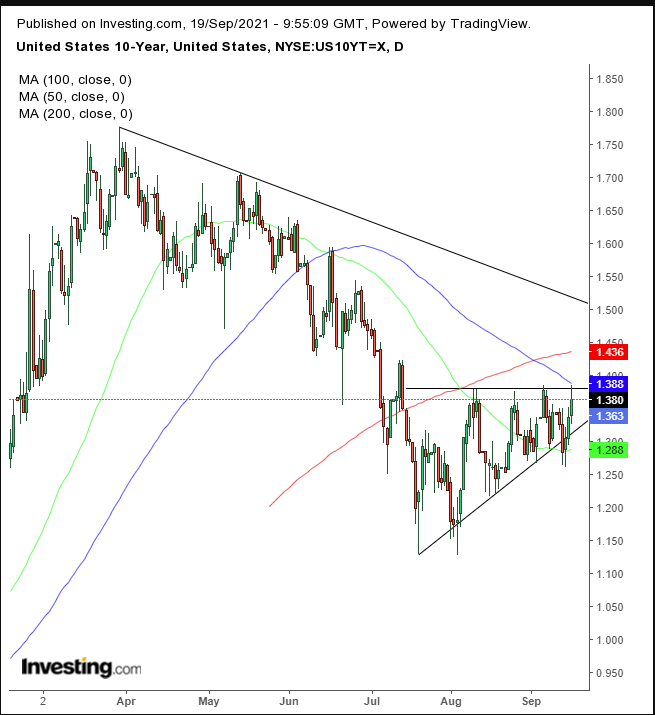 Yields tested the top of a potential rising triangle, which would allow rates to retest the downtrend line.

Rising yields boosted the dollar for a second day. 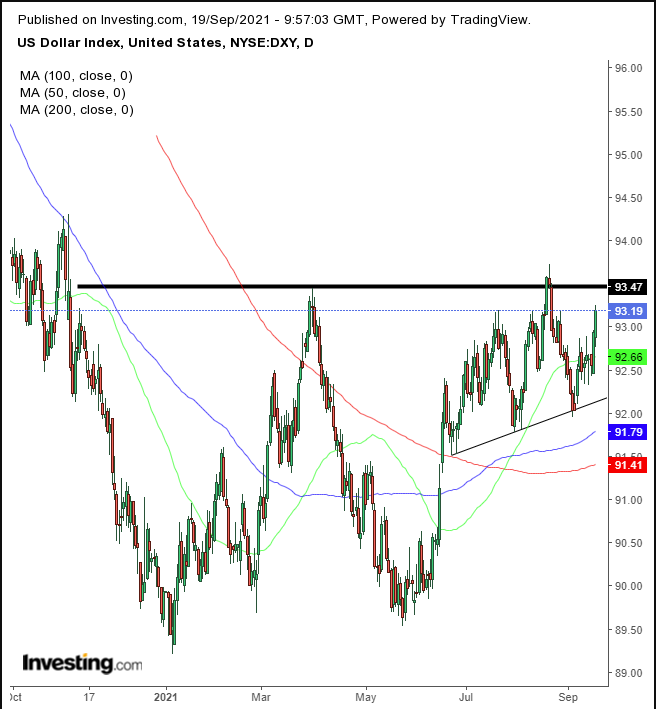 Still, the greenback found resistance at the same level at which the price formed the right shoulder of a potential H&S top. This has been negating the upside breakout of a massive double-bottom.

Gold , on the other hand, slumped for the third day, tracking Treasuries. 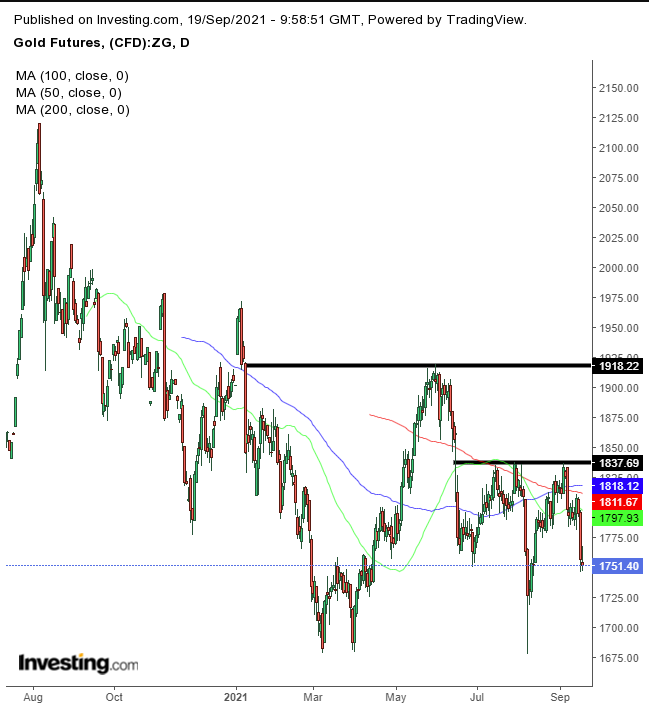 In a mirror image of the dollar, however, the yellow metal found support by a right shoulder to a possible H&S bottom, which could be a set-up for a much larger double-bottom.

As energy companies situated on the US Gulf Coast restarted production after two hurricanes pressured supply, oil fell on Friday. 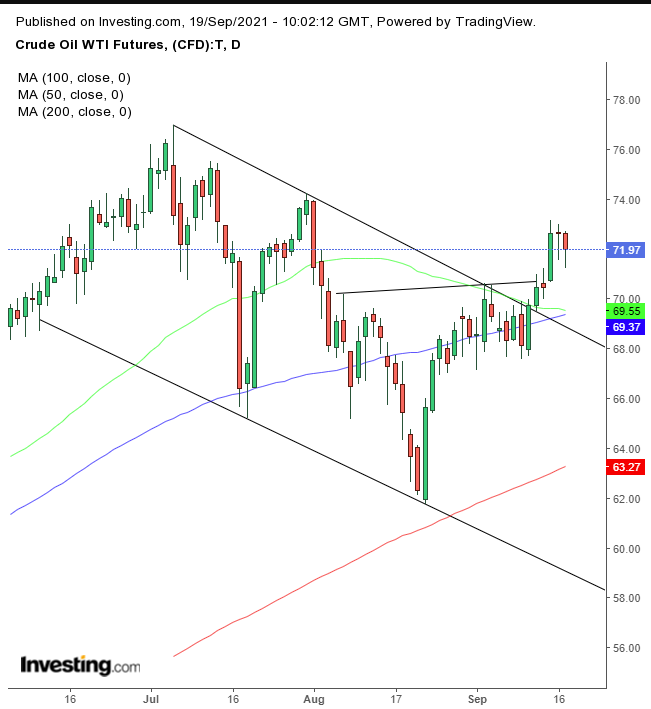 WTI looks like it completed an Evening Star, but the lack of the first gap may diminish that possibility. Whatever the case, the price broke free of its falling channel, completing a H&S bottom, suggesting higher moves are on the horizon.