While all four major U.S. indices advanced last week, excepting mega caps, they failed to make new highs. What are investors waiting for?

The week will provide economic data, including for inflation (via the PCE , the Fed's preferred inflation gauge), manufacturing ( Chicago PMI , ISM Manufacturing ) and spending ( consumer , construction ). But the most impactful report could be that of nonfarm payrolls . Given that the data matters in the context of monetary policy, a series of Fed speakers could potentially move markets. Chief among them is Federal Reserve Chairman Jerome Powell, who is set to deliver his view of "the economic outlook and the labor market" at the Brookings Institution on Wednesday.

As the event's title spells out, the Fed boss is focused on data, which has been prompting him to keep hiking rates aggressively: For the fourth time in a row, on Nov. 2 the Fed raised by a historically high 0.75%, taking rates to their highest level since 2008. The Fed has faced criticism for seemingly wanting Americans to lose their jobs, but they are not magicians.

When there are almost two job openings for each seeker, it is an employee's market, with full employment and the highest wages. When people have job security and expect it to stay so, they increase demand for products and services, which inevitably exacerbates inflation. Accordingly, if the Fed is to remain consistent, it will keep raising rates until the jobs market declines. Consensus sees 200,000 new jobs in November, easing from 261,000 in October.

According to FOMC minutes from the Nov. 1-2 meeting, published Wednesday, a "substantial majority" of members think it would "likely soon be appropriate" to temper the sharp increases. A change in employment data, due out this Friday, may reinforce this desire or force the Fed to keep accelerating rates. As of now, analysts predict "just" a half-percentage-point increase at the next Fed meeting on Dec. 13-14.

I am skeptical regarding Powell's reiterations that he still believes a soft landing is possible. I foresee a hard landing, because the U.S. economy has virtually not expanded, even though we have yet to see the rate hikes’ full impact.

And while growth stalls, the cost of living inflated by 6.2% in September YoY, according to the U.S. PCE , and by 5.1% even after removing volatile energy and food prices . A technical recession was already triggered when GDP fell in the first and second quarters. In the third quarter, GDP rose 2.6%, primarily because of a spike in exports (and this is not necessarily representative).

Since quantitative easing has replaced a natural economy operating on participants' supply and demand, we have seen investors reacting favorably to poor economic data and selling off when the economy proves resilient. I expect that backward philosophy regarding our artificial economy is even stronger now, as the Fed is the only game in town.

While all four U.S. gauges advanced, utilities outperformed and technology lagged, demonstrating investor caution. We can clearly see that on the chart. 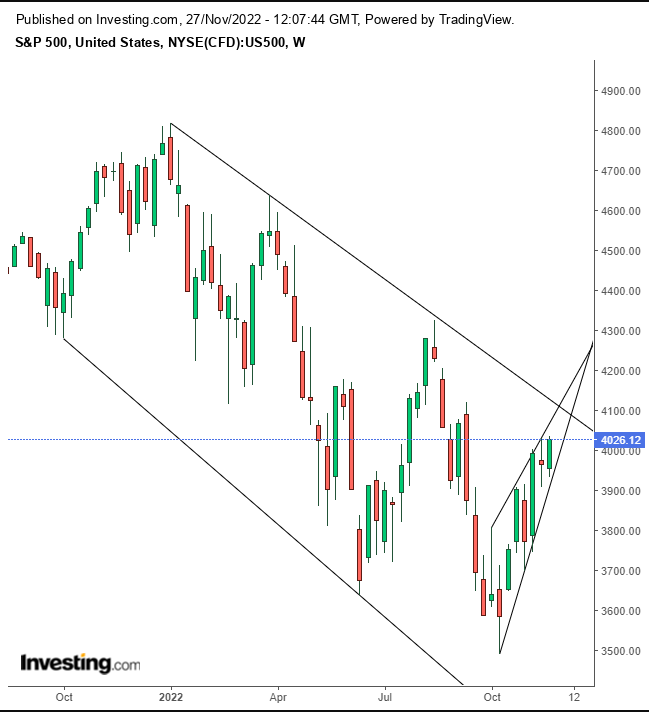 While I included the S&P 500 chart, the following is true for all but the Dow : while the weekly price climbed, it found resistance near last week's highs. The Dow made a new high in the short-term uptrend, confirming investors are looking not for growth but for preservation.

In the S&P 500, we also see a bearish pattern developing in the short term as it possibly climaxes ahead of the falling channel top, demarcating the medium-term downtrend.

The short-term rally is characterized by a faster ascent of lows, while highs are not keeping up, forming a rising wedge. This pattern is bearish, completed with a downside breakout, as bulls grow tired of the lack of progress and exit positions. 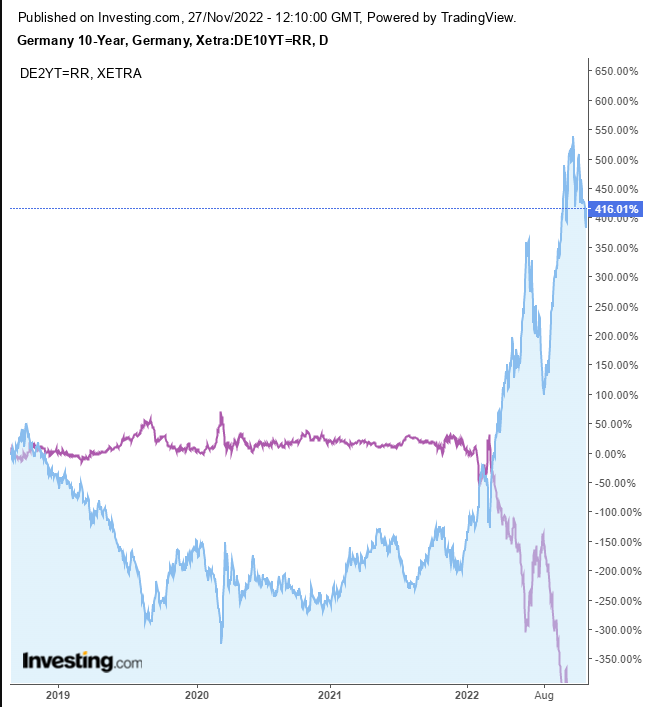 The dollar has declined since its biggest two-day selloff on Nov. 10-11, when consumer inflation (per the CPI ) rose 7.7% YoY in October, its slowest rate since January and lower than 8% estimates. Last week, the dollar sank further, completing a bearish pattern, after Fed minutes revealed a growing consensus to ease its aggressive path to higher rates. 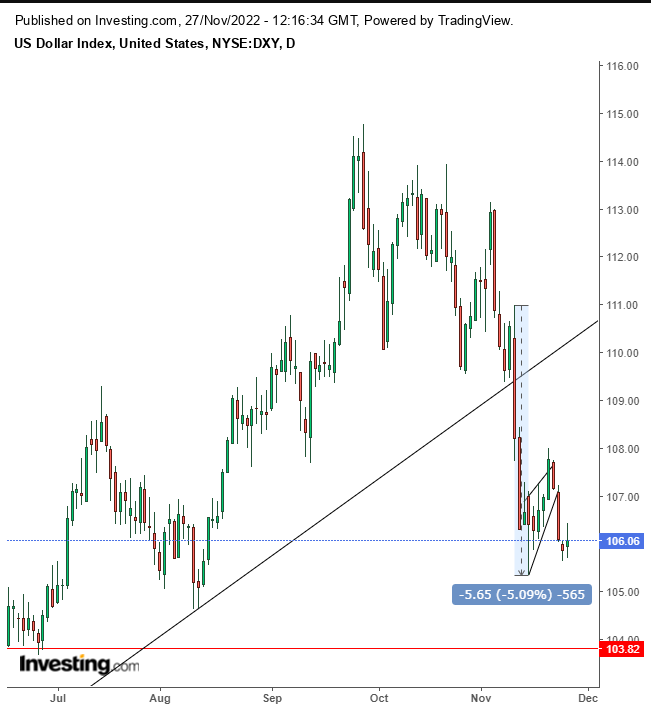 The dollar formed a rising flag, bearish after the initial 5% plunge within four sessions, whose implied target will put to the test the 103 support of the highs since Jan 2017 (red line).

Gold enjoyed the weakening dollar when its yield role lessened. 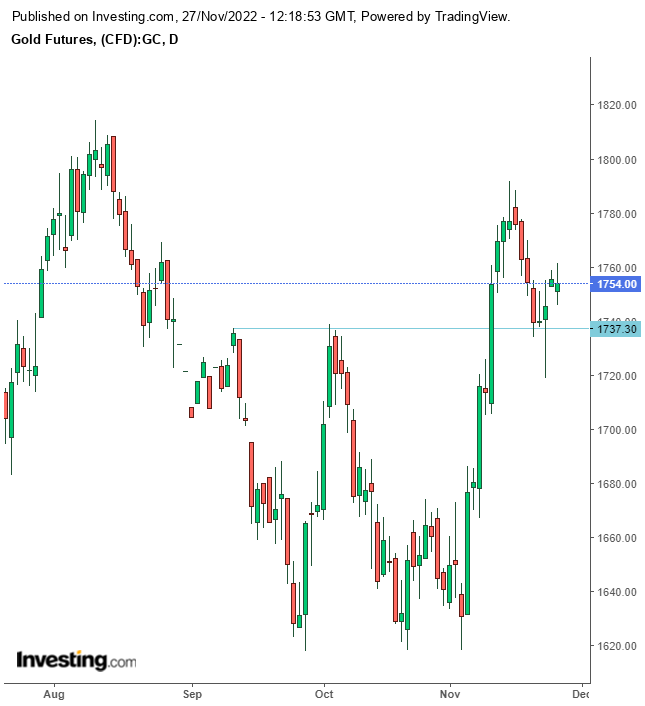 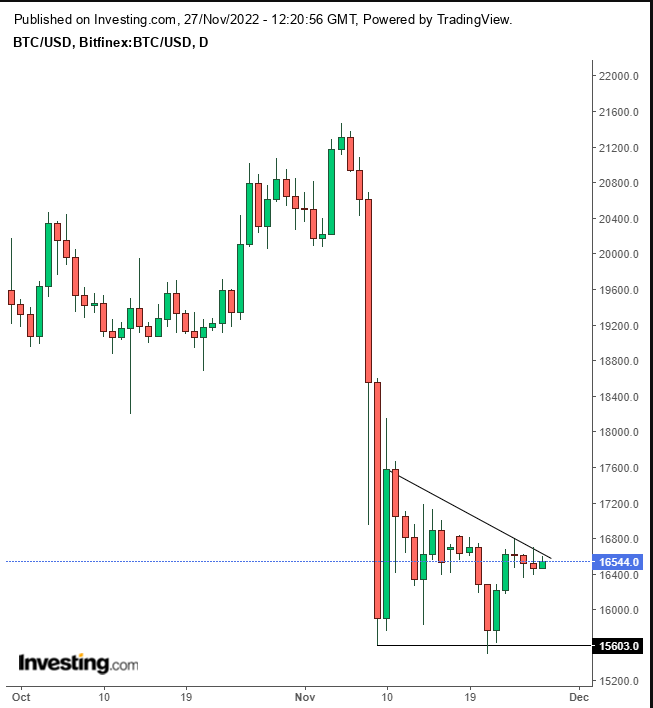 Bitcoin may be forming a descending triangle, a pattern of a range that projects bears overcoming bulls. The downside breakout will imply a $2,000 drop from the point of breakout to $13,600. 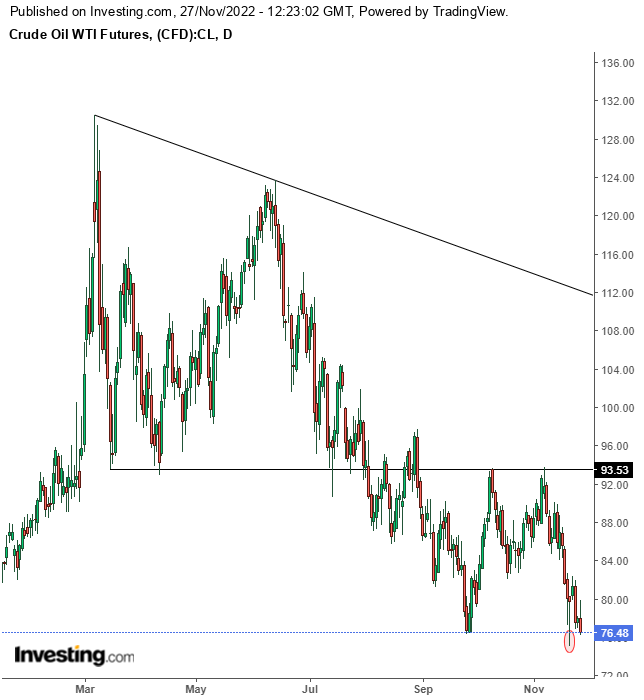 However, that day developed a potent bullish hammer. Therefore, wait for a fall below $75 for confirmation.