After spending recent months fixated on inflation and monetary policy, investors will likely now shift their attention to upcoming Q4 earnings following the official kick-off of the season on Friday.

Analysts expect earnings to upend previous +20% estimates with potential +25%-30% beats. However, cyclical sectors— Energy , Materials , Industrials , Financials , and  Consumer Discretionary —could grow by 95% to 100% as the economy accelerates.

Technology shares, on the other hand, are anticipated to underperform. This shifting market paradigm is seen to continue over coming quarters.

We expect the cyclical rotation to pick up as earnings from value sectors outperform returns from growth stocks that tend to lag during periods of economic expansion. To begin with, sectors sensitive to economic cycles are probably better prepared to deal with the sharpest inflation in four decades, which rose 7% YoY during December, the highest since 1982.

To be clear, 'value' stocks are shares that have been neglected in favor of rapidly-rising tech stocks, something that occurred during pandemic lockdowns as COVID-19 initially spread globally before vaccines were introduced. These stocks were overlooked, thereby becoming cheaper even as the market caps for highly popular mega cap tech companies became increasingly stretched.

Now, with lockdowns less of a factor in the US and other countries, upcoming higher borrowing costs due to interest rate hikes are expected to hit companies whose valuations are already lofty.

Though the S&P 500 , NASDAQ and Russell 2000 all eked out gains on Friday, the mega cap Dow closed lower to finish out the week.

On a sector level, Energy stocks surged over 5% for the week, making it the clear winner, though that was due more to reduced oil production levels rather than anything related to economic hiccups. The only other sector in the green on a weekly basis was Communication Services , up 0.16%. Technology shares retreated 0.1%, 'outperforming' the remaining red sectors, including those that are economically sensitive.

Also on Friday, major US banks Citigroup (NYSE: C ), Wells Fargo (NYSE: WFC ), and JPMorgan Chase (NYSE: JPM ) reported Q4 earnings. As expected, each beat estimates ahead of Fed hikes, but overall investors were disappointed with the results and their shares finished the week mixed.

In particular, JPMorgan tumbled 6% after the bank's CFO said that increasing expenses, including wage inflation, will likely cause the bank to miss its 17% target for returns on capital. We predicted that JPMorgan would decline after its report, albeit based on the technicals.

Will the cyclical rotation scale up in the week ahead? If US Treasury yields continue climbing, we see that as benefiting value stocks.

On Friday, 10-year Treasury yields hit their highest levels since Jan. 17, 2020, before COVID pressured the US stock market. Higher yields result from selling Treasuries, whose falling prices increase the difference with the payout. Rising yields—the result of investors selling Treasuries, whose falling prices increase the level of the payout—are a leading indicator of higher rates, as investors dump bonds with current yields in favor of future sovereign debt with a higher payout. 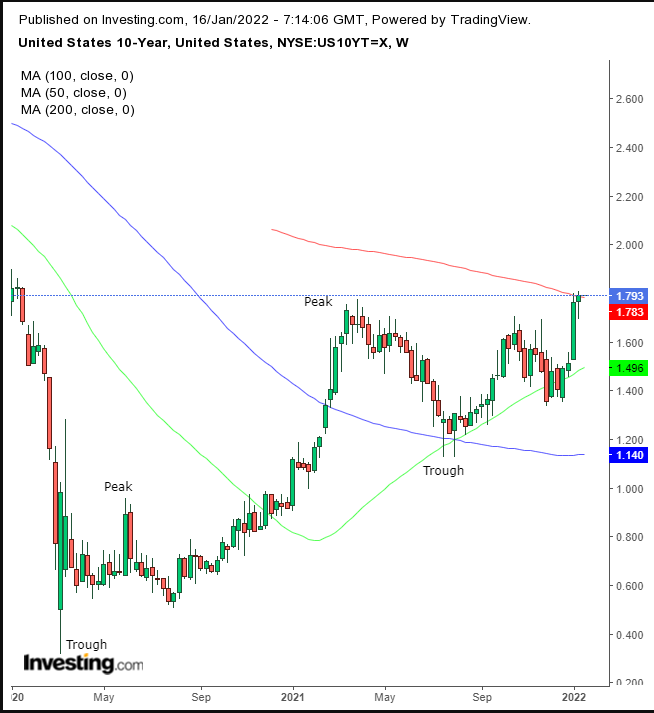 Rates extended a new peak within the rising trend, but found resistance at the 200 WMA.

Surprisingly, the dollar fell after the highest annualized CPI read in 40 years, though it recovered a bit on Friday. 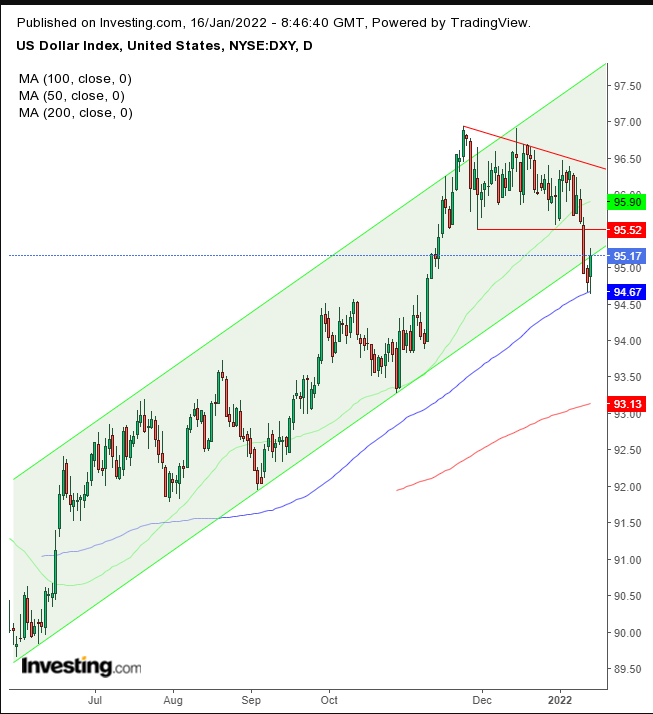 The USD found support by the 100 DMA but hit resistance at the bottom of the rising channel it fell through after violating the 50 DMA as it completed a Descending Triangle. 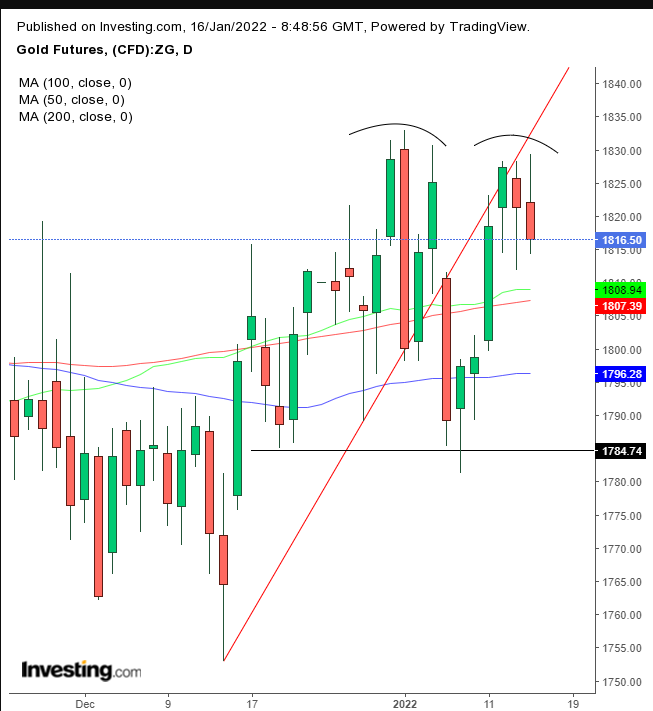 Gold dropped for a second day, even as the dollar weakened.

Bitcoin has been flat since it moved higher on Friday after confirming a resistance on Thursday. 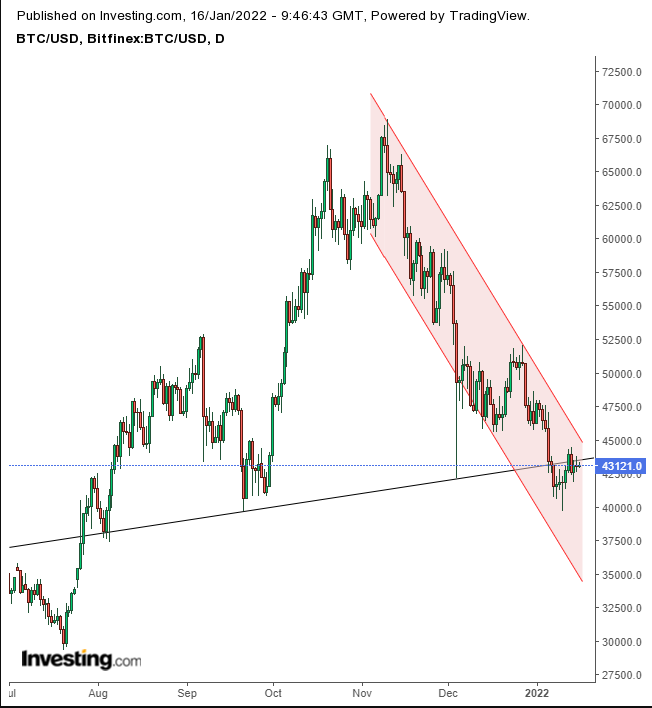 The cryptocurrency appears to have completed a return move to a sizeable H&S top, which included a Death Cross, as the 50 DMA crossed below the 200 DMA. The reversal pattern's implied target is $30,000, putting it on track for an even more significant top.

Oil output has been lagging, both among OPEC+ countries and in the United States, sending the price of oil up to 1% from its Oct. 26 peak, itself the highest since Oct. 13, 2014. However, that doesn't mean there is no risk for oil prices. 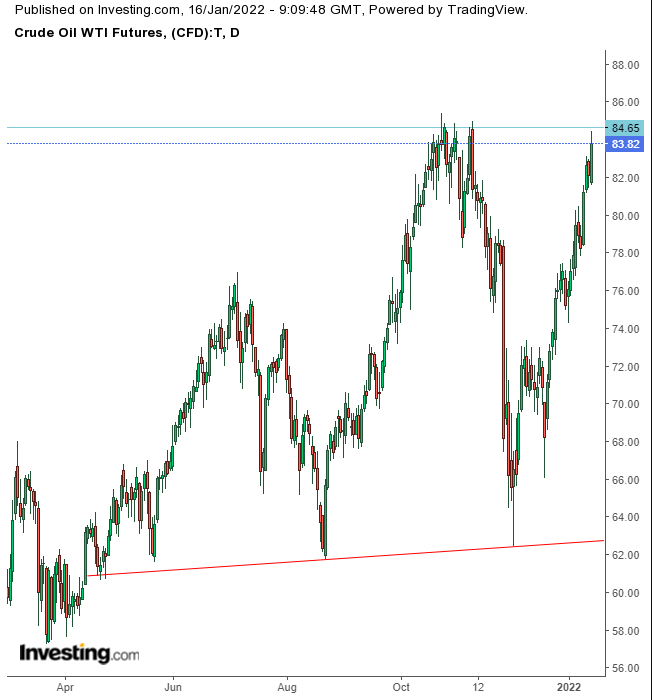 WTI closed off its intraday high on Friday, having found resistance by the October-November highs, potentially turning into a complex H&S top.