In the US, consumer spending is responsible for a whopping 69% of the $23.2 trillion American economy. Yet recent data showed growth in this metric of only 1.6% for the previous quarter, a fraction of the 12% increase seen during the second quarter. This could prove to be a warning about what's to come for both retail sales data and upcoming earnings reports from the retail sector, which begin this week.

Adding further grist to the potential negativity, the US economy expanded at just 2% QoQ for the third quarter, the slowest rate of escalation since the 2020 recession.

An additional set of 'prices paid' data points investors will be watching in the coming week are regional Fed manufacturing audits which will include the NY Empire State Manufacturing Survey on Monday and the Philadelphia Fed Manufacturing Index , released on Thursday.

Still, inflation has been the recent key theme driving markets over the past quarters. It will likely remain a dominant narrative in the coming week with government retail sales data due to print on Tuesday and such retail sector stalwarts as Walmart (NYSE: WMT ), Target (NYSE: TGT ), and Home Depot (NYSE: HD ), among other mega cap retailers, releasing their quarterly results in the week ahead.

The market considers big-box global retailer Walmart to be a representative proxy for consumer strength—or weakness. Home Depot and Target will also provide valuable readings on consumer health amid rising prices. Walmart and Home Depot release Q3 2021 results on Tuesday, Nov. 16, before the open. Target will post Q3 earnings on Wednesday, Nov. 17, before the market opens as well.

Given the importance of consumer spending to the overall American economy, and Friday's Michigan Consumer Sentiment Index plunging in the preliminary November report to a decade low of 66.8, falling from 71.7 in October, the souring consumer mood could be a significant red flag. It comes on the heels of producer and consumer prices jumping more than anticipated, with the Consumer Price Index soaring 6.2% YoY, a 30-year high.

Though equity markets closed in the green on Friday, all four major US indices finished in the red on a weekly basis. The S&P 500 Index , the Dow Jones Industrial Average and the NASDAQ all snapped a five-week winning streak, while the Russell 2000 ended a four-week straight upward run. The tech heavy- NASDAQ 100 rose 1.04%, the index leader, while value stocks listed on the Russell 2000 lagged, eking out a 0.09% gain.

In keeping with the oft mentioned cyclical rotation theme, growth sectors were Friday's winners though economically sensitive stocks were the investor theme from a weekly perspective. Among S&P 500 sectors, Communication Services rose 1.46% during the final day of last week's trading, followed closely by Technology , which was up 1.22%. The best-performing cyclical, Industrials climbed 0.79%, well behind the growth sectors.

However, on a weekly timeframe, sectors related to the Reflation Trade were the SPX leaders. Materials jumped 2.6%. However, after outperforming last week, Consumer Discretionary shares—which tend to do well in a healthy economy—tanked, shedding 3.54% of value. Still, for all the Tech churn amidst the Reflation Trade, it closed up 0.14% for the week though Communication Services fizzled, retreating 0.58%.

The major US indices posted bearish candlesticks for the week. 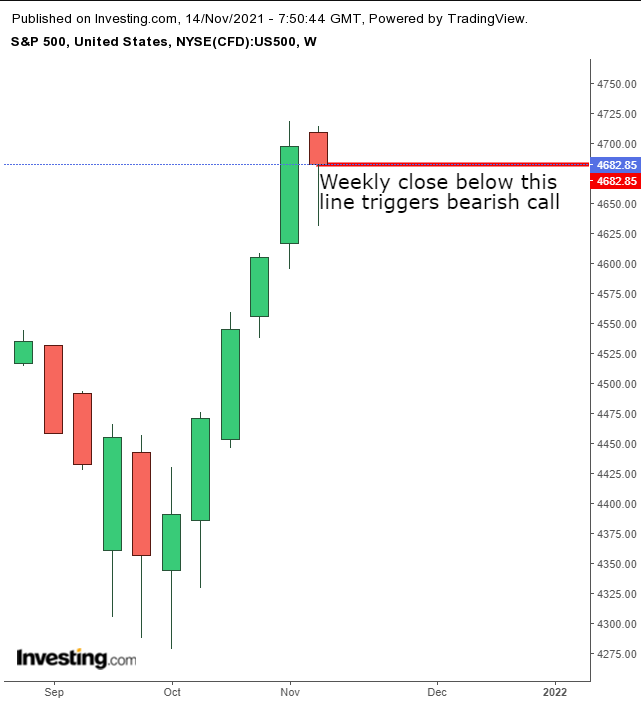 The S&P 500 and the NASDAQ indices formed Hanging Men, a set-up for a bearish call, pending confirmation of a close below Friday's closing prices. 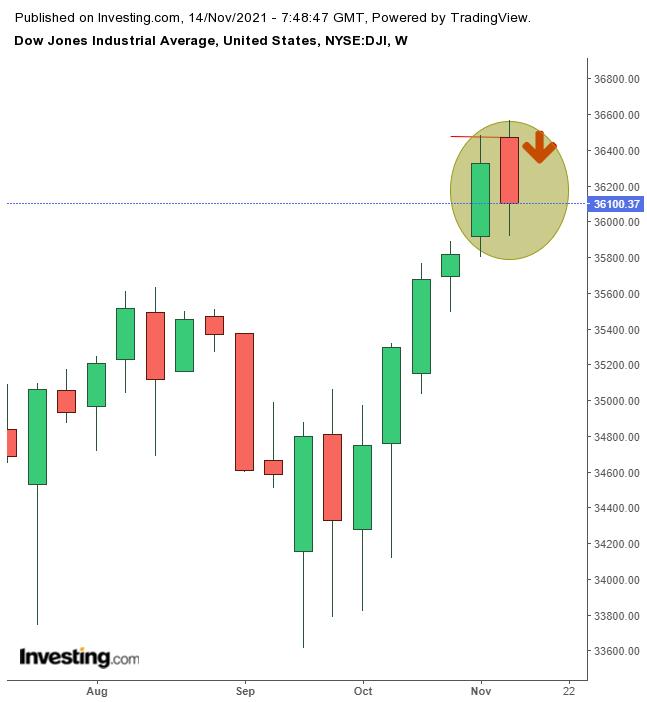 The mega cap Dow opened the week higher, but closed well into the previous week's candle, completing a Dark Cloud Cover, which occurs when bears dismantle a bullish attack and fight back.

It's noteworthy that while equities had a losing week, yields wiped out most of their previous week's losses, as investors sold-off Treasuries, including the 10-year note. It's rare for both stocks and Treasuries to fall in unison since investors generally rotate between them, bidding up shares when looking for risk and hiding money in Treasuries when they decide to retreat into a safer haven.

However, this past week provided a rare market environment—while investors worried that increasing costs would weigh on corporate profits, speculation for faster and tighter monetary policy incentivized traders to let go of current rates, anticipating higher yields for Treasuries ahead.

The dollar jumped 0.86% for the week, its biggest move since Aug. 16, when the greenback vaulted 1.06% higher, on the same expectation of higher rates. 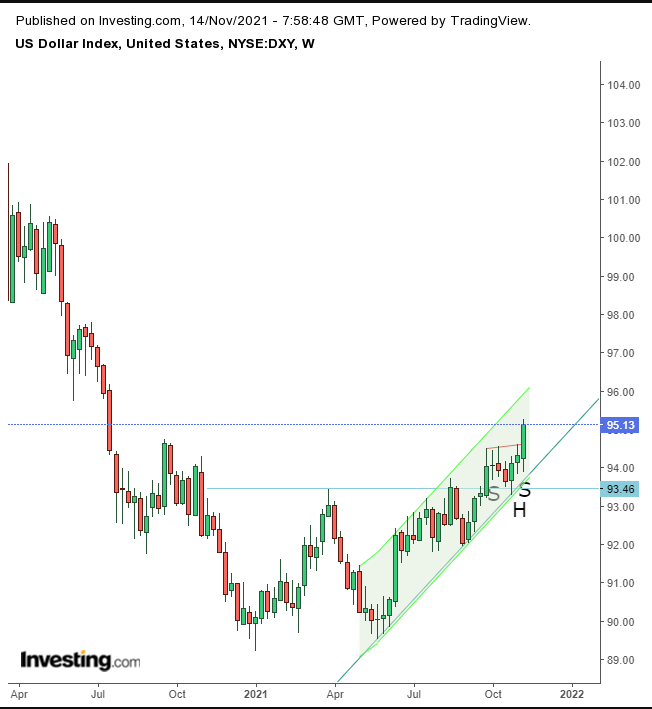 The USD completed an H&S bottom, signaling an end to the return move from a double bottom since a year ago.

Gold surged last week, +2.81%, the yellow metal's most powerful move since early May. It was the precious metal's seventh straight daily gain, the longest streak since a nine-day advance ended on July 29, 2020. 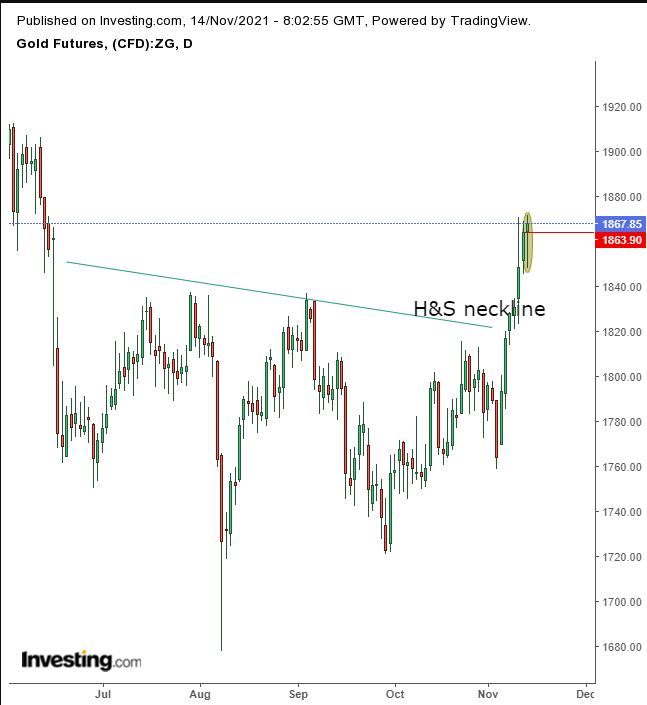 Where gold heads next remains a bit precarious based on its technicals. On the weekly chart, the price action completed an H&S bottom, but on the daily chart, trading formed an imperfect Hanging Man—flawed due to a small upper shadow, which can mitigate the pattern's psychology of spurned hopes when the price falls. A close below 1,860 will signal a return move to the weekly H&S bottom.

Bitcoin has been struggling on Sunday to maintain a slight gain. 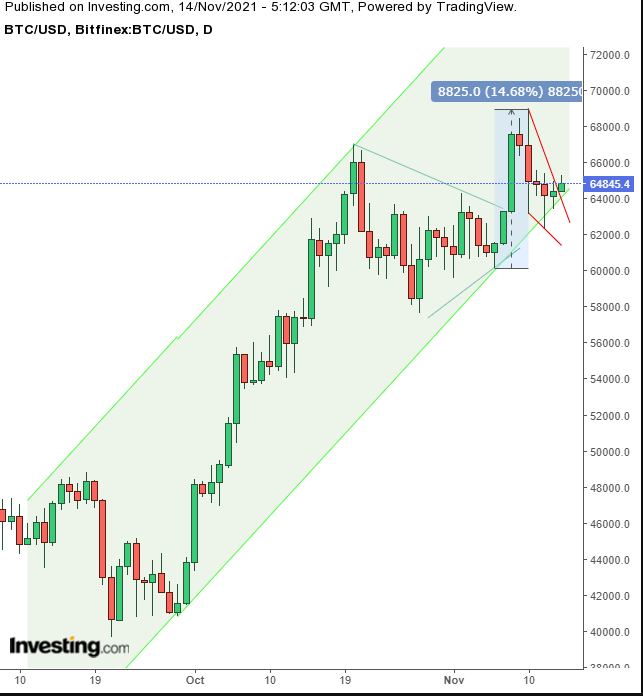 This is occurring as the price of the cryptocurrency is on the verge of completing a falling flag, the second consecutive bullish pattern for the token after the pennant that was completed last Monday. A long green candle will signal a resumption of the underlying uptrend.

Oil posted a third weekly price drop as, among other pressures, US shale output surged to its highest level since the beginning of the pandemic. From a technical perspective, however, oil might be setting up for a rally. 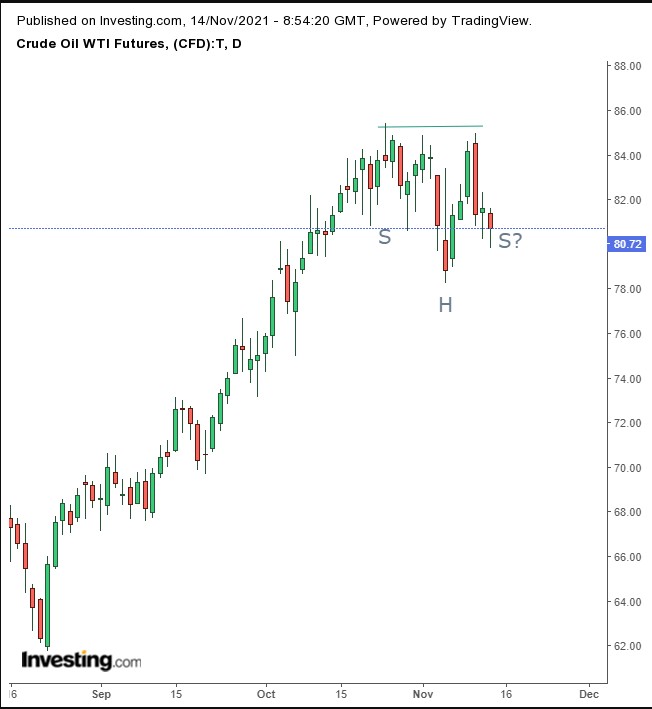 Despite its decline, WTI found support at the late-October lows. If crude rises from here, it will be forming the right shoulder of an H&S continuation pattern. A close above $86 will signal an objective of $92.