Fears of the latest COVID variant, dubbed Omicron, will likely dominate market sentiment in the upcoming week, overshadowing positive US economic data including better than expected initial jobless claims figures, released ahead of Thursday's Thanksgiving holiday. Though scientists don't yet know a lot about the rapidly spreading B.1.1.529 Omicron variant—first detected in South Africa—the World Health Organization (WHO) declared on Friday it was "a 'variant of concern,' indicating that it carries higher risks than other virus strains."

Panicked investors dumped everything from risk to haven assets as the trading week came to a close. Equities, gold and the dollar all sold off. It appeared the only thing being bought were Treasuries.

US, European Indices All Plunge To Finish The Week

The S&P 500 plunged 2.27% on Friday, its sharpest daily drop on a percentage basis in nine months. However, the move, which came the day after the Thanksgiving holiday, occurred during thin holiday trading. That's something that exaggerates price action given there were few counter-trades available.

Still, Friday saw the biggest post-Thanksgiving selloff for the S&P 500 index, the market's broadest representative gauge, since 1941, when President Franklin D. Roosevelt issued a proclamation establishing the holiday on the second to last Thursday of November.

However, it was the economically sensitive benchmarks that were hit hardest. The oldest Wall Street index, the blue chip, mega cap Dow Jones Industrial Average , shed 905 points, or 2.5% of value, its worst day since October of last year. 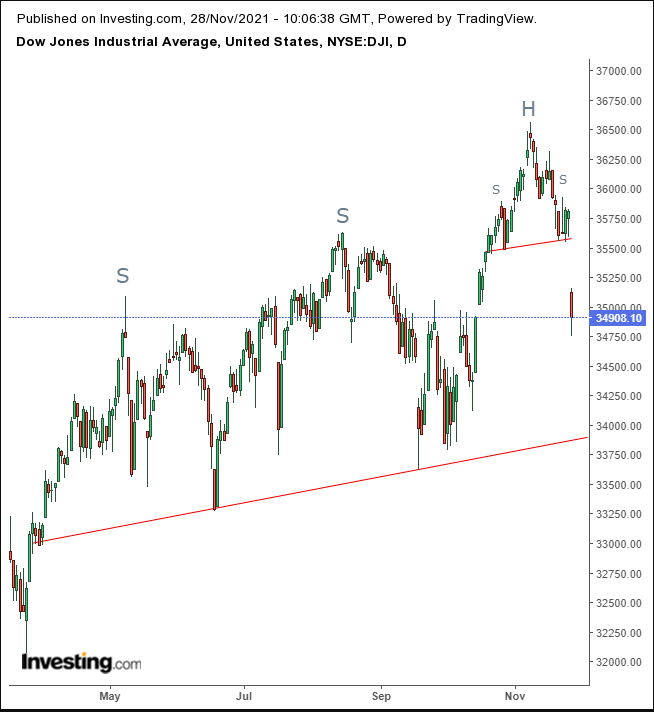 The Dow's dive completed a small H&S pattern, which may be part of a much larger H&S top.

The Russell 2000 , whose domestic firms rely on an open economy, plummeted 3.7%, underperforming among the major averages. 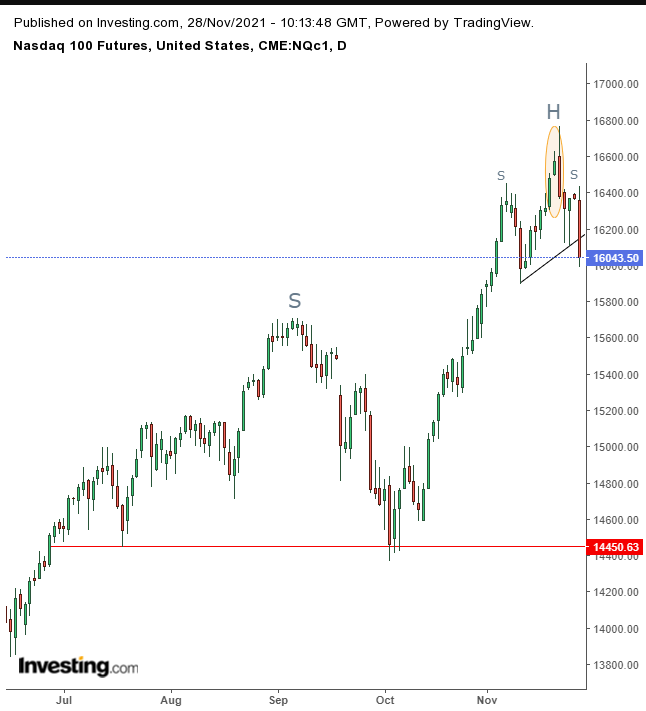 The NASDAQ 100 may have completed a small, upward sloping H&S top, which, like the Dow, could be the head of a much larger H&S top. Note that the shoulder of the potential larger H&S was the head of a failed H&S top.

When a reversal pattern blows out, it often forces the market in the opposite direction to its initial trajectory, providing traders with the impetus to make new highs. However, such technical rallies are often short-lived, as the initial bearish pattern indicated weakness. Those dynamics could be the background for a potential large H&S.

Shares listed on the STOXX Europe 600 Index suffered a 3.7% drop, the sharpest tumble for the pan-European index since June 2020, with volatility near a 10 month high.

The hottest, most in-demand asset on Friday were Treasuries. The yield on the benchmark 10-year note saw its sharpest drop since the notorious March 2020 bottom which followed the rapid market declines fueled by the pandemic's first wave. 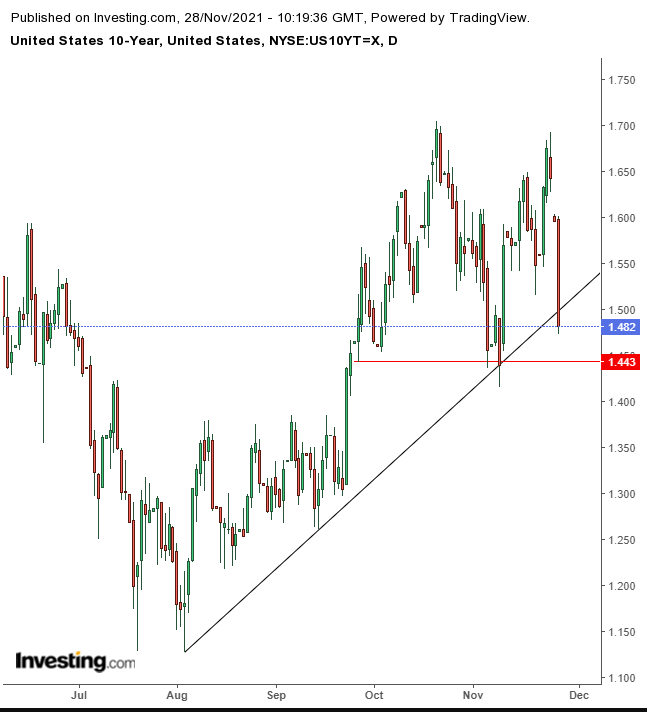 The rate on the 10-year Treasury could be on the verge of topping out, suggesting momentum remains high for continued Treasury buying, which could have yields retesting 2021's lows.

The Dollar Index slumped as much as 1.05% on Friday, settling at -0.72% to close out the week. Ironically, the euro jumped 1% after sliding for a month, even as the ECB trails other central banks with regard to tightening.

The safe haven yen surged, gaining 1.77% versus the dollar. 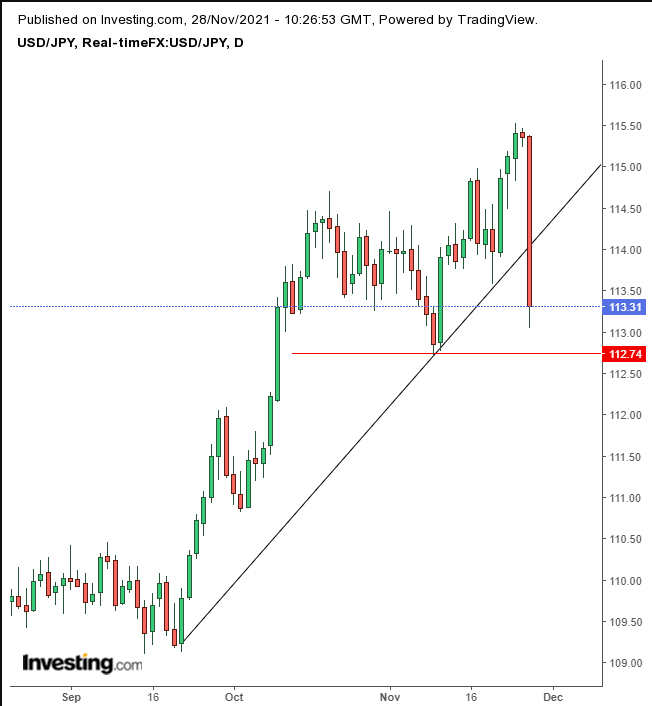 From a technical perspective, the dollar could find temporary support at the 1.13 level, which might prove to be the neckline of an H&S top.

Another safe haven currency, the Swiss franc , jumped 1.25% versus the greenback.

Despite gold also being considered a haven—and even though the dollar, its counterweight, was weak—the yellow metal dropped 0.40%. That's not very significant considering the day's volatility. It's still surprising since the precious metal is the oldest safe haven asset known to man.

Note: gold initially rose 1.34% but then dropped appreciably. Our guess is that ultimately the luster of Treasuries was brighter and the sovereign bonds eventually siphoned away capital. 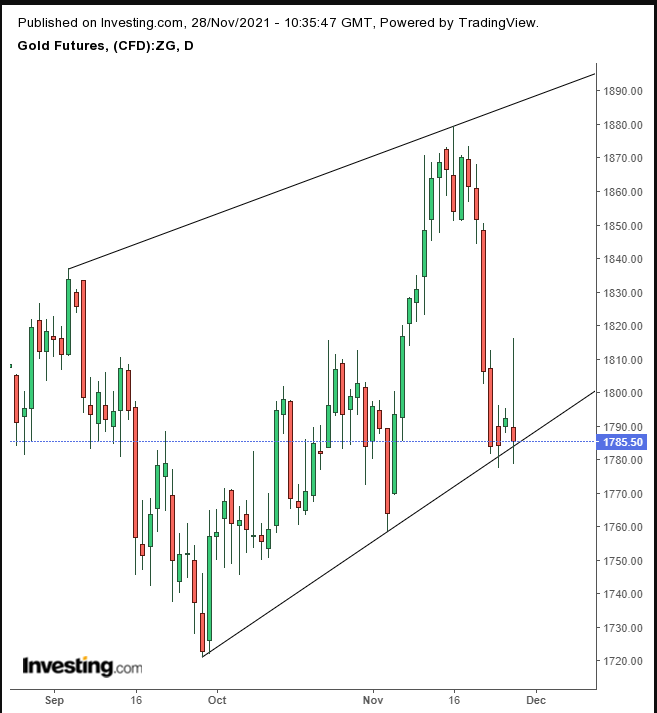 Technically, gold found support above its uptrend line. The fact that it remained at the bottom of a rising channel suggests the price will retest the Nov. 16, $1,879.50 peak.

Bitcoin plunged as well on Friday, dropping 8.6%. The slump extended the second trough in a fresh downtrend.

It was 'black' Friday for oil bulls too when the price of the commodity went into freefall, diving by about $10 a barrel amid a 12% drop, as the new coronavirus variant was seen to increase lockdowns and therefore pressure travel. 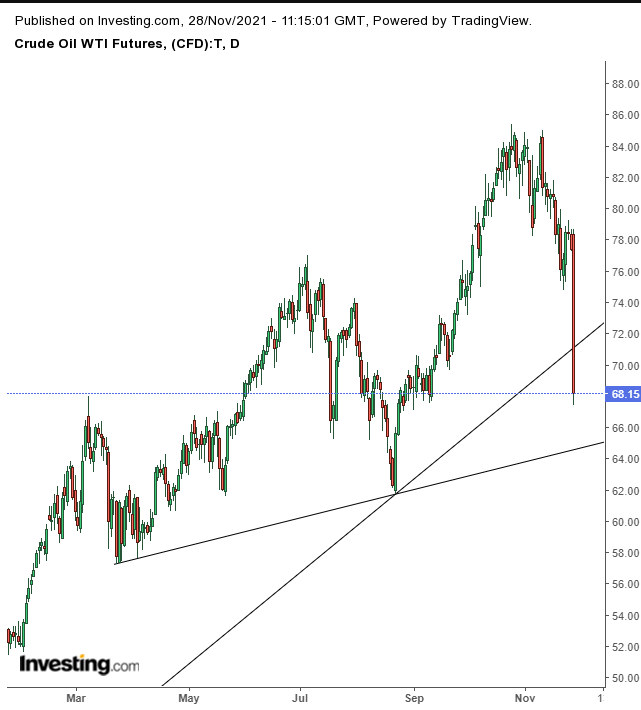 WTI closed $10.22 lower at $68.17, a 13.04% decline, taking the price below its uptrend line since the Oct. 30 low. The price may find support at about the $65 level, a support line since March. If the price falls below that second support, however, we might expect a sharper selloff.

Nonetheless, even if the price rises on its support, it could develop a big H&S top, in play since March.