How should I interpret a week such as last? The Dow Jones Industrial Average , representing blue-chip stocks, declined, and the S&P 500 , considered by many as the best gauge of the market, was primarily flat. Conversely, the only two benchmarks to extend a controversial rally were the Nasdaq 100 , representing big tech, and the Russell 2000 , representing small-caps.

Here is my thought process:

Can big tech and small-caps carry the market?

Big tech and small-caps are insufficient to carry an entire market. Sure, they can outperform and go up on certain days when the rest of the market does not, but they can't go their separate ways in the long run.

Can big tech and small-caps carry the market during the highest inflation and fastest tightening in decades?

Even more impossible. Big tech and small-caps are the biggest losers during rising rates. Tech's valuations don't justify the higher borrowing costs, and small companies' businesses don't have the opportunities and resources to take advantage of accounting plays.

Maybe last week was a fluke, and the S&P 500 Index and Dow will return to rallies?

That is the only possibility, and I'm going to try and explore whether the market will continue rallying.

There is a heated market debate as to whether the recent advance is a bottom or a bear rally. At the heart of the discussion is this question: Has the Fed reached its aggressive hiking peak? After delivering his second three-quarters-of-a-percent increase in a row, Federal Reserve Chair Jerome Powell suggested the central bank could lower the pace of its rate increases in coming months if inflation showed signs of peaking after reaching more-than-four-decade highs.

Bulls are hanging on to Powell's words about slowing rates if inflation peaks, but why are they ignoring all his other words? Powell delivered a speech whose rhetoric could have been taken from a Hollywood war scene. The Federal Reserve will not flinch in its battle against the most intense breakout of inflation in the United States since the 1980s, even if that means a "sustained period" of economic weakness and a slowing jobs market.

And there was more rhetoric. Powell said, "I do not think the U.S. is currently in a recession," along with the compelling argument: "It doesn't make sense that the U.S. would be in recession."

The Biden administration has insisted that the two consecutive quarterly declines in gross domestic product do not constitute a recession. Why? Given various measures, but primarily because of the strong labor market.

I don't recall another administration saying that two shrinking quarterly growths are not a recession. Because I was concerned that politics are eclipsing finance, I turned to my Dictionary of Finance and Investment Terms, which I bought in 2006. Here is the definition of a recession: "downturn to economic activity, defined by many economists as at least two consecutive quarters of decline in a country's gross domestic product."

Notice the definition's restrictions: "by many." This means that some disagree. That's fine. If the Biden administration would have acknowledged that many maintain that two falling GDPs determine a recession, but that they believe it's not because of such and such reasons, I could have accepted that. However, the out-and-out rejection of such a concept is what convinces me that this is politics, not economics.

Still, let's address Biden's assertion: A strong job market means we're not in or heading to a recession. Here is how Michael Kantrowitz, chief investment strategist at Piper Sandler, argues that point.

Regarding the argument that the economy could be different now, coming out of a global pandemic, the likes of which none of us has seen before, and that we have an unemployment picture that looks relatively strong, Kantrowitz responds that there was one phenomenon that was never different. Following each of these tightening cycles, the housing market has bottomed. However, far from bottoming, home prices in the U.S. have just topped out. Moreover, housing is always the first to respond to rates, and employment always last. In other words, it's a matter of time.

Having said all that, I'd like to point out a caveat in Kantrowitz's compelling thesis. He is right that one thing never happened - an economy escaping a recession without a housing bottom - but there is one more thing that is different, and one that he didn't apply to the four times in history that recession didn't follow tightening: quantitative easing. I honestly don't know how that might affect what comes next if the Fed returns to an alternative economy.

After a surprise jobs report - which Biden is using to make his point, even if it contradicts his narrative of a tempering economy to sustain growth - this week offers up a plethora of inflation data sure to create volatility: CPI , PPI , unit labor costs . Also, the Fed closely watches Friday's consumer sentiment , which encompasses consumer inflation expectations. The 3.25%-3.5% year-end Fed forecast could move higher if inflation remains hot.

The United States 10-Year is still inverted, a leading indicator of a recession. 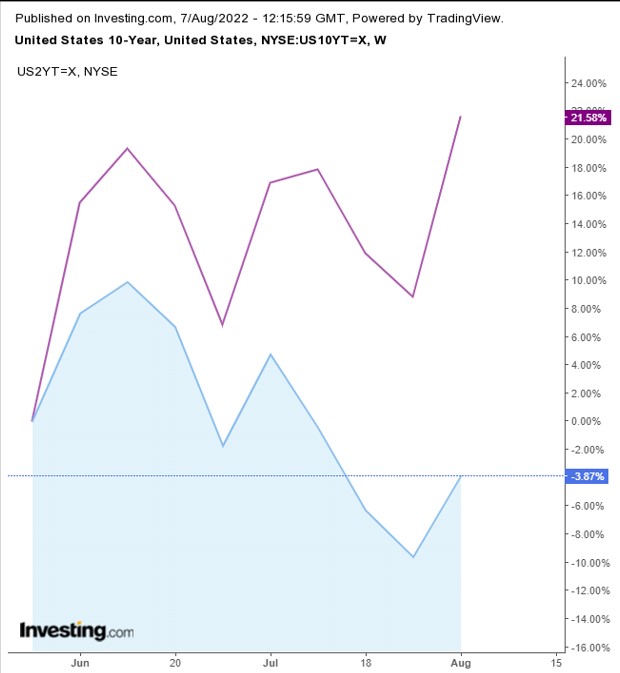 The three major indices - the S&P 500 Index, Dow Jones, and the Nasdaq 100 - remained within their falling channels.

However, even the Russell 2000, which broke its topside, is still beneath the January-to-March trough within the descending trend. 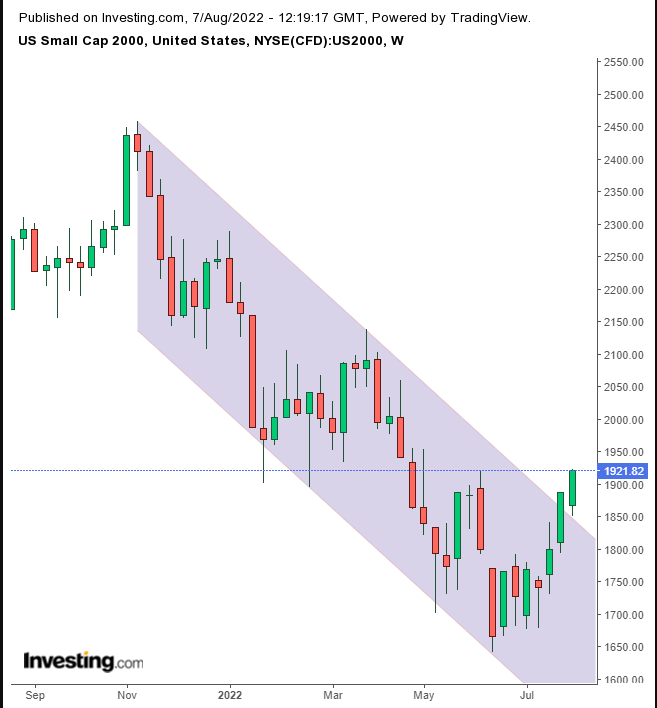 Outperforming tech may be overpriced and afford the best short-selling position.

The Nasdaq 100 reached the top of its channel and retreated. Like all the benchmarks, it also finds resistance by the previous low. 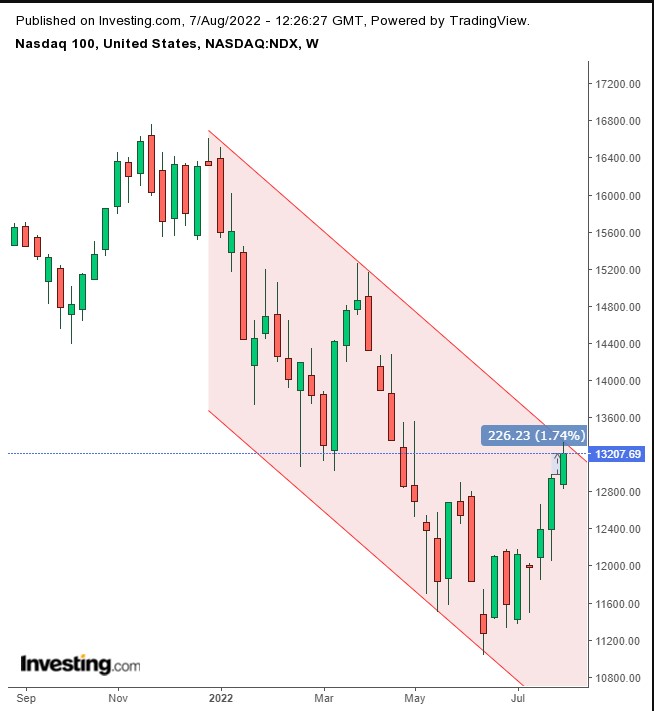 The US Dollar Index climbed weekly for the first time in three weeks. 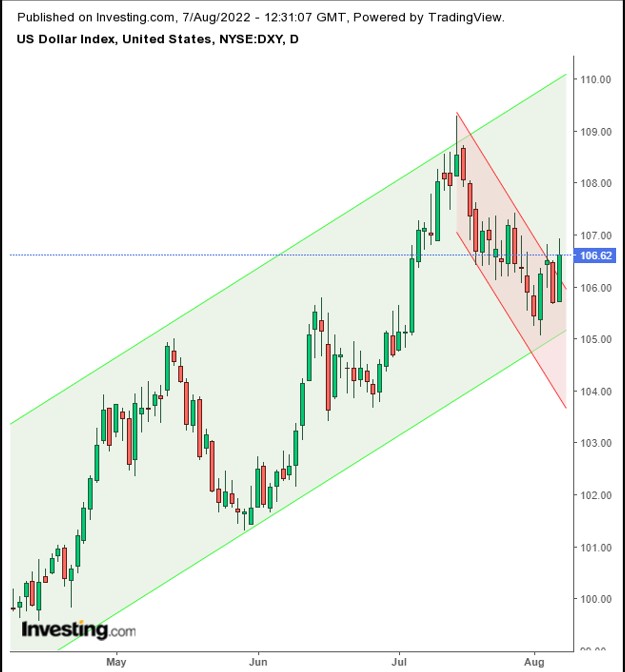 The greenback bounced off the bottom of its long-term rising channel, closing above its short-term falling channel. Could this mean that investors have shifted to an outlook in which the Fed keeps raising rates?

Gold Futures kept advancing after our last post on the yellow metal. The commodity even broke through the falling channel, breaking through the 50-day moving average. However, the precious metal closed slightly below the MA. Gold traders, like those watching the dollar, await the plethora of inflation data the coming week offers. 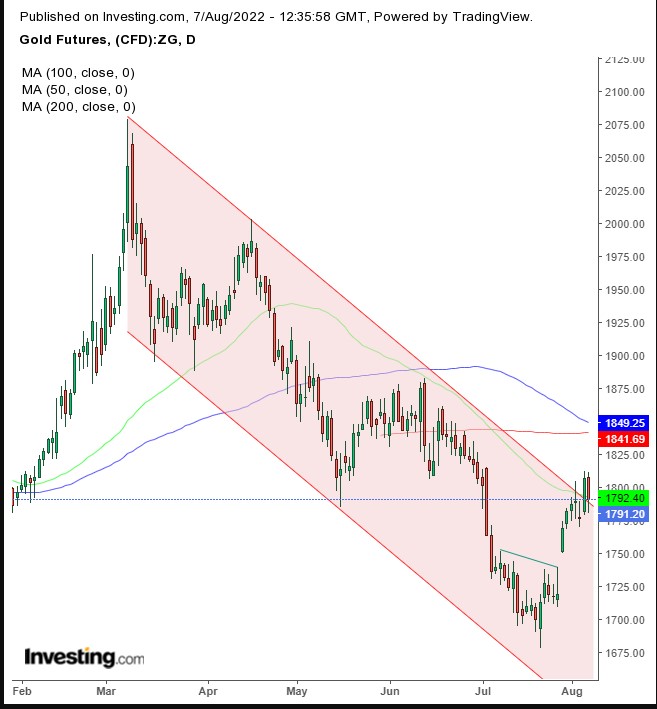 Bitcoin declined for the week but made no significant moves. I'm still waiting to see how this massive top plays out, and I think it will crash. 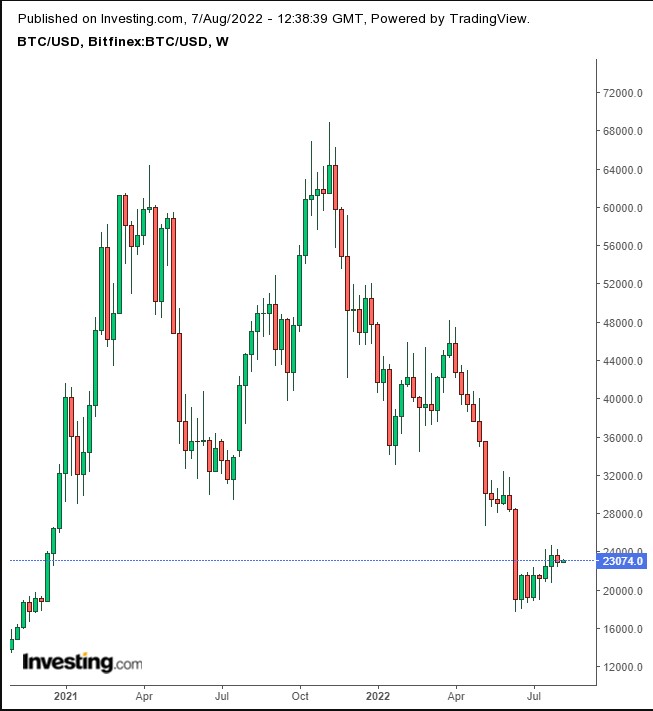 Crude Oil WTI Futures fell to $89 on Friday on recession fears, another leading indicator of a recession. Here is my post, which is materializing. 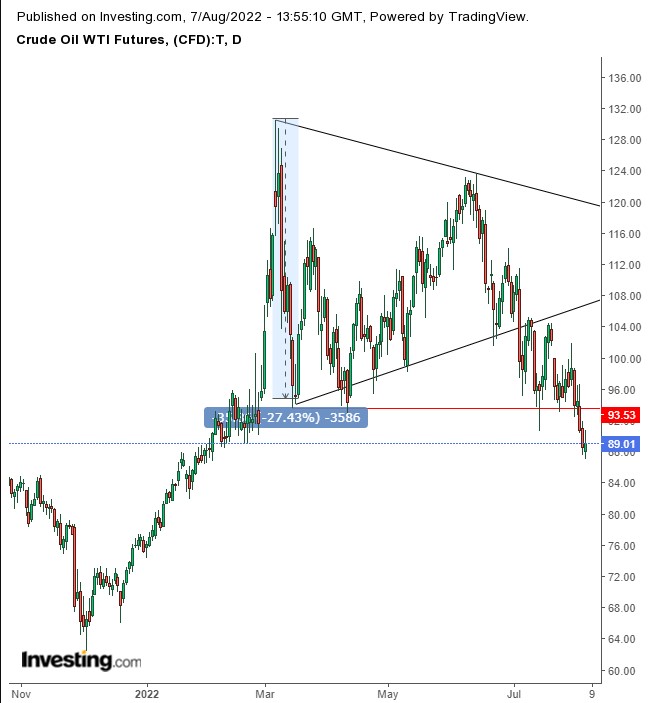 No, I don't know the future. I don't know for sure that there currently is or will be a recession, and I don't know that stocks, oil, and Bitcoin will crash. I only believe so based on the preponderance of the evidence. Happy trading.

Disclosure: The author currently does not own any of the securities mentioned in this article.