Just as the dog days of summer have very little to do with dogs and everything to do with heat, so went the first week of August in the markets. The emphasis was not on the dogs, but the heat generated by a few unexpected events.

First up was the realization that the era of so-called meme stocks is not quite over, as AMTD Digital (NYSE: HKD ), a little known Hong Kong-based company, turned heads as its stock made a meteoric rise without any substantive reason.

After making its debut on the New York Stock Exchange on July 15 at an initial price of $7.80. It peaked on Wednesday, hitting $2,555.20 in intraday trading, which gave it a market cap that, according to Bloomberg, ranked among the heavyweights of publicly traded companies in the world. That meant for a brief moment, AMTD – a three-year-old company that charges fees for digital financial services and posted revenues of only $25 million last year  – was in the same neighborhood as JPMorgan Chase & Co (NYSE: JPM ) and Meta Platforms (NASDAQ: META ). 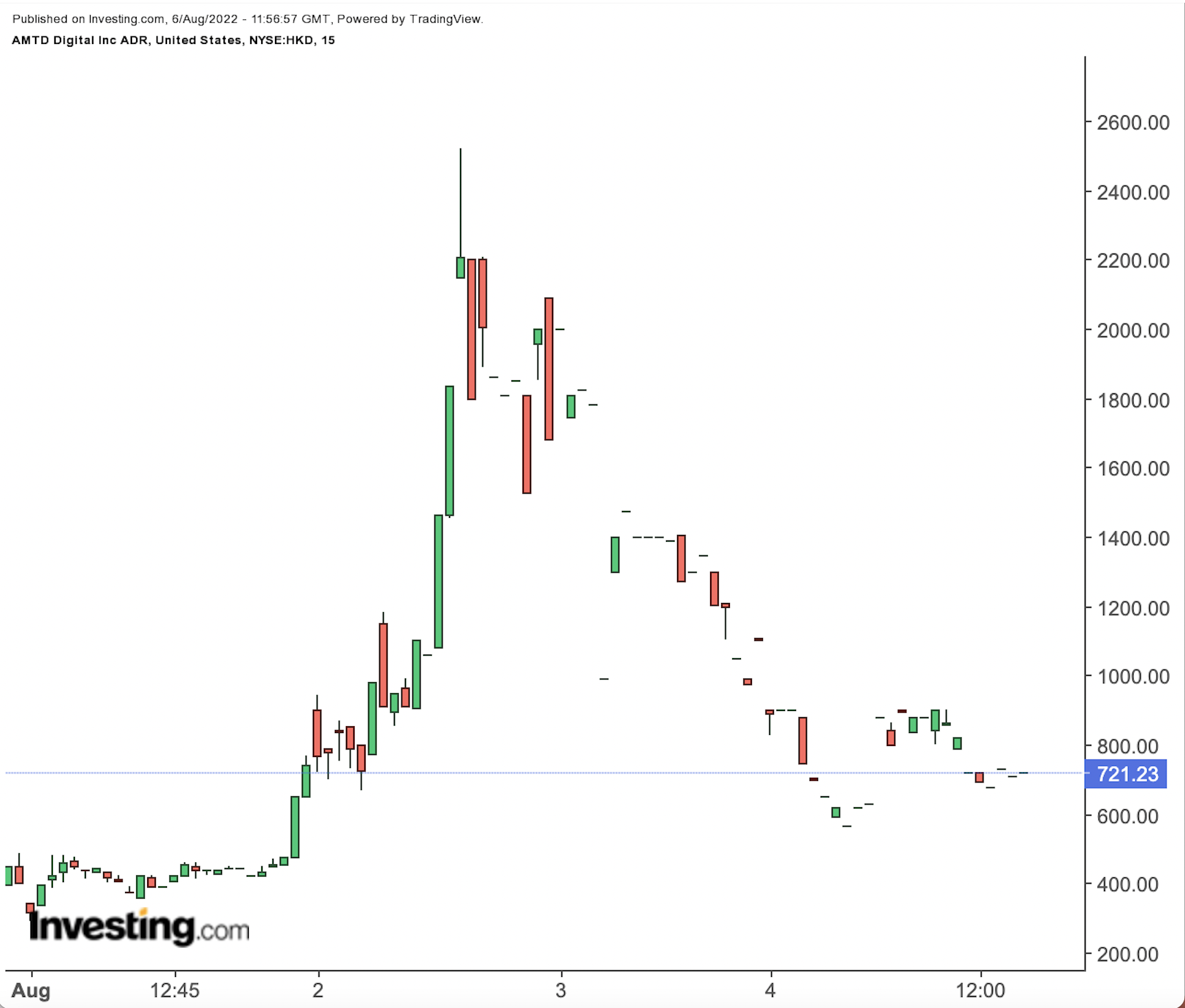 The stock has since retreated from those unexplainable values, closing the week at just over $721, taking a 57% plunge since mid-week and putting the company’s market cap at a still-incredible $133.5 billion – or on a par with CVS Health (NYSE: CVS ) and more than Amgen (NASDAQ: AMGN ), and just below the biggest bank in Canada – the Royal Bank of Canada – and above the UK's HSBC.

Just in case the queasiness of this rollercoaster ride has made it difficult to do the calculations,

the latest drop in AMTD stock wiped more than $160 billion from its market cap. Or, as they say In the land of meme-like stocks: Easy come, easy go.

The question of whether Chinese e-commerce behemoth Alibaba (NYSE: BABA ) will be delisted from the New York Stock Exchange was a popular topic of speculation this week after the U.S. Securities and Exchange Commission ended the previous week by including it on its list of companies that could be delisted.

The reason Alibaba was on the list of possible delisting was due to its failure to comply with auditing requirements.

The past week began with a statement from the company on Monday, claiming it will comply with all requirements.

“Alibaba will continue to monitor market developments, comply with applicable laws and regulations and strive to maintain its listing status on both the NYSE and the Hong Kong Stock Exchange.”

The stock opened the week losing about 5% in Hong Kong before recovering. By the close yesterday, it had regained some ground both on the Hong Kong and New York exchanges. 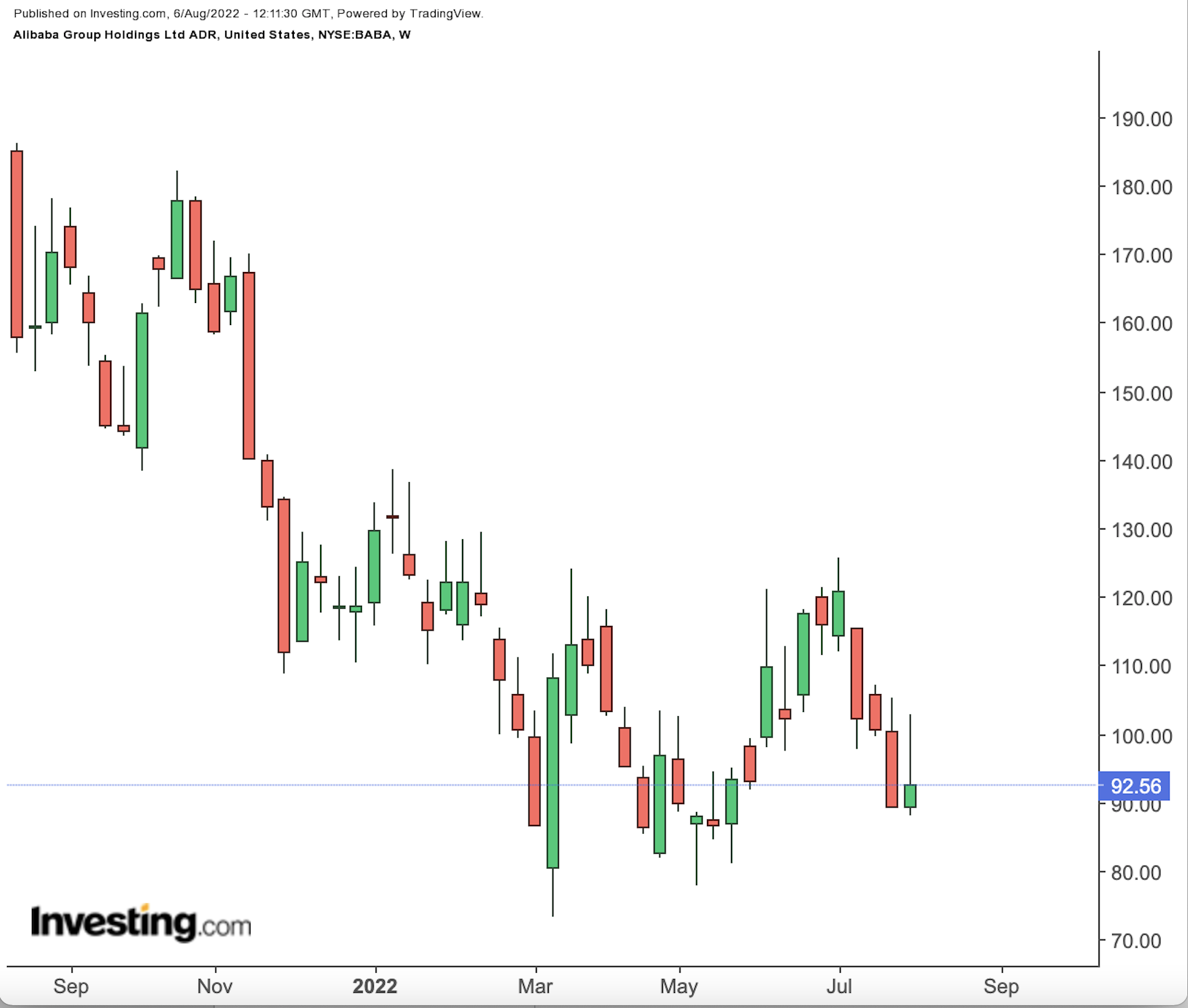 Alibaba is one of the most heavily-traded Chinese companies in the U.S.

And in case you needed confirmation that just about everything seemed a little off kilter this week, came yesterday’s jobs report . It confirmed that even good news can be bad in this economy.

The markets reacted quickly to what, in more normal times, would have been seen as a strong economic indicator, with 528,000 jobs created in July and the unemployment rate dropping to 3.5%

Stocks initially fell across the board in response on Friday morning, in what ended up being a rollercoaster trading day. The response was being interpreted as investors’ worrying that such a strong labor report would lead to the Federal Reserve following up with more rate hikes.

But the secondary headline should not be ignored: Wages increased 0.5% in July, bringing the year-over-year hike to 5.2%. And again, the good news of wages improving is underlining concern that inflation will continue to be sustained.

By the end of trading, the major indices closed down, with both the S&P 500 and NASDAQ Composite in the red.

The situation still has time to shake out, however, as there will be one more jobs report and two CPI reports before the Fed makes its next rate move.

And for all those out there who are keeping score, here are the top gainers of the past week:

Ah, what happens in the “dogs days of summer…. “

In case you ever wondered where the term came from to describe the period from July 3 to Aug. 11, they are usually the hottest days of the summer. It is not because they are not fit for a dog, as many assume. They are in reference to an astrological occurrence in summer, when Sirius – also known as the “Dog Star,” as it is part of the constellation Canis Major, the Greater Dog – rises and sets with the sun. On July 23, it is in conjunction with the sun, and given that it is the brightest star visible from any spot on Earth, the Romans thought it added to the sun’s heat. That is how the 20 days before and after July 23 became known as the dog days.

It is just more proof that the world where things often happen for reasons that are not always obvious extend far further afield than the markets.