OPEC+ will be meeting next Wednesday, Feb. 2, to assess the market and set production policy for March. The current status quo calls for the group to increase its total production by 400,000 barrels per day for that month, just as they have since the summer of 2021.

But there are a few new issues for the group to consider that are impacting the market. Here is a breakdown of the three most critical issues that OPEC+ will need to consider:

The price of oil is high right now. 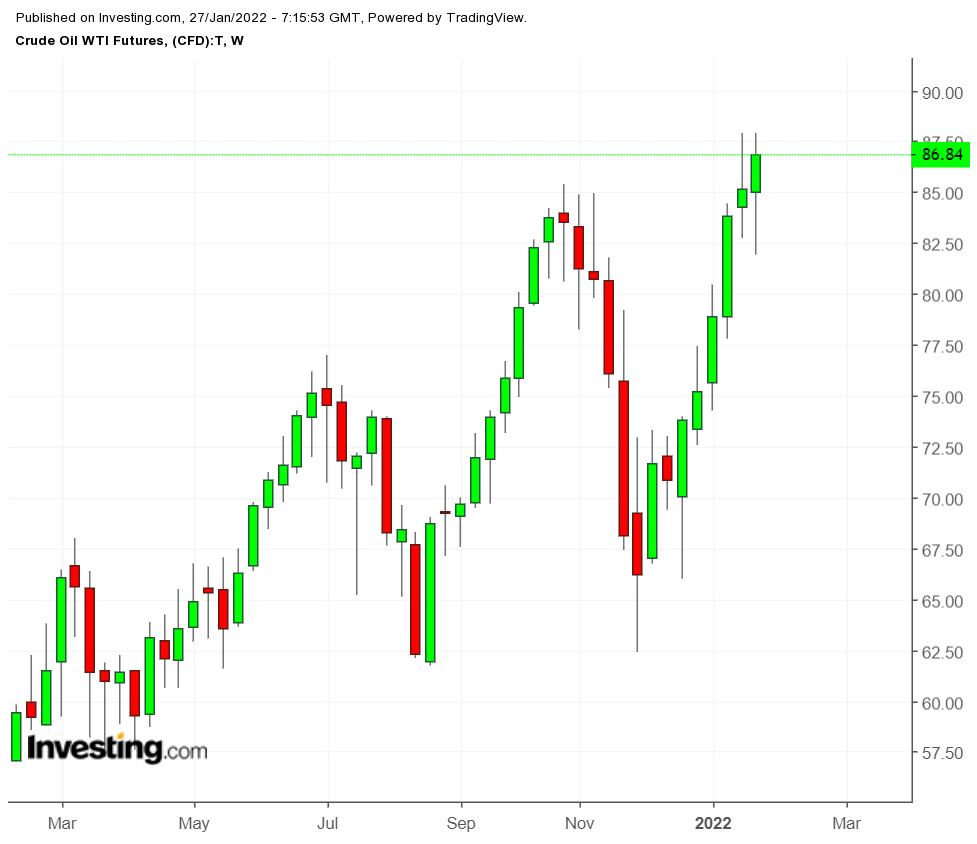 On Wednesday, Brent hit the $90 per barrel mark for the first time in seven years. The price of WTI was also up to nearly $88 per barrel as of midday Wednesday. Of course, OPEC+ countries appreciate high prices, and there is no indication yet that these levels will contribute to a global economic stumble.

However, certain OPEC+ players, like Saudi Arabia, have historically tried to steer OPEC away from situations in which high oil prices cause economic contraction and hinder sales.

The group will likely consider whether fundamentals or speculation are to blame for the current market rally. If the group believes speculation rather than supply and demand is driving prices up (which it is likely to do) they'll most probably stay the course with their current policy rather than shake things up.

2. Conflict Between Russia And Ukraine

The Russia-Ukraine issue continues to hold a major spot in the minds of traders. Traders seem to believe that a potential Russian invasion of Ukraine would lead to a dislocation in the oil market and a supply disruption.

That is a significant part of the reason we are seeing such high prices. However, it is yet to be seen just how likely an invasion is or whether it would really disrupt the market so much. There is a good argument that even in a scenario of an invasion and of resulting sanctions against Russia’s energy industry or banks, China’s oil purchasers would step in to buy Russian oil.

There is also reason to believe that Germany would continue to purchase Russian energy supplies as it has already sought an exemption from any potential future sanctions. The supply streams may look different, but it is unlikely that OPEC+ will see a reason, at this point, to make any policy changes due to the developing situation in Europe.

OPEC+ members have not actually produced up to the current quota of 40.894 million bpd. This raises the question of whether the organization should continue to increase quotas or at least wait until the members catch up with production.

The expectation seems to be that OPEC+ will continue to raise production quotas but only those members who are able to make those additions will actually do so. In reality, the market will not see 400,000 bpd more oil from OPEC+ in March. However, pulling back on the monthly quota increases would have undesirable upward force on the price of oil.

The OPEC+ meeting will take place via video conference on Feb. 2 and members are expected to reach a consensus that day. Of additional note, Saudi Aramco (SE: 2222 ) is expected to issue its official selling prices (OSPs) for March after the OPEC+ meeting. It is likely that Aramco will raise its prices to Asia, with many other Middle Eastern producers following Aramco’s pricing footsteps.