The Rand has once again wobbled it's way to the end of the week, but has ended up sitting a lot more comfortably than it did at the beginning.

It was another week of international focus, as electrical energy costs and supply took centre stage.

It was not just China battling, but Europe now joining their similar issues. And both were giving warning signs for all countries.

But Europe's problem is quite unique, being a country so reliant on imports.

Right now, energy prices are soaring and there is no clear light on the horizon - only an incoming winter which is sure to make things worse.

But let's get into the full Rand Review - and take a look at how these kinds of crises are warning signs for SA and the Rand as well.

Here were the rest of the big talking points from the week:

So, to begin the week, we had the Rand floating around the R14.90 level, still awaiting a clear breakout on either side of the R15/$ turning point.

And this week was surely the one where we were going to get some clarity.

Everything was primed for volatility, as we head into the end-of-year period - which just has a reputation for being that way!

And there was the brewing crisis in Europe that we had already touched on.

Europe's position is not a good one, as they are heading into another winter, and energy prices are on a one-way track higher at the moment. This is not just a European problem, with oil prices, fuel prices etc across the whole word suffering badly - or rather, consumers suffering badly, as a result of this!

Here is a chart from Bloomberg showing just how bad it has become: 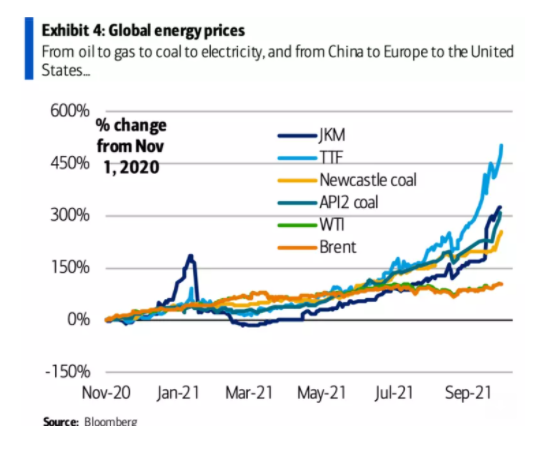 This is just adding to the host of problems that the UK is facing, with Brexit having already created complications like nothing else for the supply chains in the region.

As we head into a period of the holiday season, there is never a time where supply chains are under more strain - and the perfect storm since the beginning of the 'pandemic', to the blocking of the canal and much more!

It never rains, but it pours!

As for the Rand, the first half of the week was shaky on all of this news as markets looked largely very unsettled by this news, firstly we saw the local unit up to near R15.10, before gaining ground again into the end of the week, and back to sub-R14.75 heading into Friday!

As for the Rand, we saw more of the same on Friday, as the Rand pushed steadily stronger to begin testing the R14.60, R16.90 and R20.00 levels to the Dollar, Euro and Pound respectively. 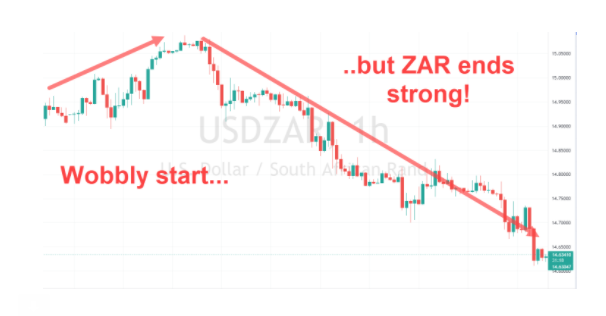 So while on shaky ground, the Rand rounded off the week in very solid fashion - which meant it got to start a new week on the front foot!

And so as we head further into the week, we have very limited fundamental data that could provide some triggers:

But nevertheless, the markets remain jittery from an economic, financial, political and social perspective, which means volatility is not likely to taper off.

Once again, we will try and cut through all the noise by focusing on what the market patterns themselves are telling us (based on our Elliott-wave based forecasting system), giving us and our clients an objective view of where the market is expected to head in the days, weeks and months ahead.