Most global stock indices flatlined following the release of disappointing US GDP growth data on Wednesday, lowering expectations of aggressive monetary policy tightening. However, US Federal Reserve (Fed) Chairman Jerome Powell reiterated the central bank’s commitment to rein in high inflation even if it meant prompting a recession and said the inability to restore price stability was seen to be a bigger risk. Powell also noted during the European Central Bank's (ECB) forum that “the US economy is in good shape and is well-positioned to withstand tighter monetary policy and that he hopes growth will remain positive, although there is a risk it will slow more than needed. He also confirmed the Fed is raising rates expeditiously and aims to move into a restrictive territory quickly,” Trading Economics added. The market is pricing in a 75bps or 50bps US interest rate increase in July 2022.

All three major US stock indices were on track for a daily decline on Wednesday as investors assessed the outlook for tightening monetary policy against a backdrop of slowing growth, while disappointing consumer confidence figures also dampened sentiment. The US economy contracted by an annualised 1.60% in 1Q22, following a 6.70% expansion in the previous quarter, while the Conference Board’s Index fell to 98.7 points in June 2022 from a downwardly revised 103.2 index points reading in May 2022.

European stocks struggled for direction on Wednesday on the back of record-low consumer confidence numbers. “The consumer confidence indicator in the Euro Area fell to -23.6 in June 2022, the lowest since April 2020, and in line with preliminary estimates. Households’ outlook on their future financial situation hit a record low and their assessment of their past financial situation dropped to a 9-year low,” Trading Economics reported. The bloc’s economic sentiment also fell to 104 index points in June 2022, the lowest since March last year, while the Economic Uncertainty Index (EUI) rose to 24.8 points from 23.4 points over the same period.

Stocks in the Asia-Pacific region led by China’s Shanghai Composite Index retreated sharply as traders booked profits following a rally in mainland stocks in the past two months. The moves also came after the Chinese government eased public health requirements for international visitors in the previous session. However, analysts said for this rally to be sustainable, investors would first need to see an increased commitment to the reopening of the economy by the government and a more accommodative policy. Japan’s Nikkei shed nearly 1% on Wednesday with chip-related stocks leading the decline.

Locally, the FTSE/JSE All Share Index (ALSI) lost ground on Wednesday led by miners and financials, as fears that stage 6 load shedding could ultimately lead to more credit rating downgrades.

In commodities, Brent crude futures rose for the fourth day in a row to nearly $120 a barrel, as global supply tightness overshadowed concerns of a global downturn. A decline in US Treasury yields and slowing GDP growth boosted bullion’s appeal on Wednesday, but the precious metal buckled under the pressure of sustained hawkish monetary policy plans. 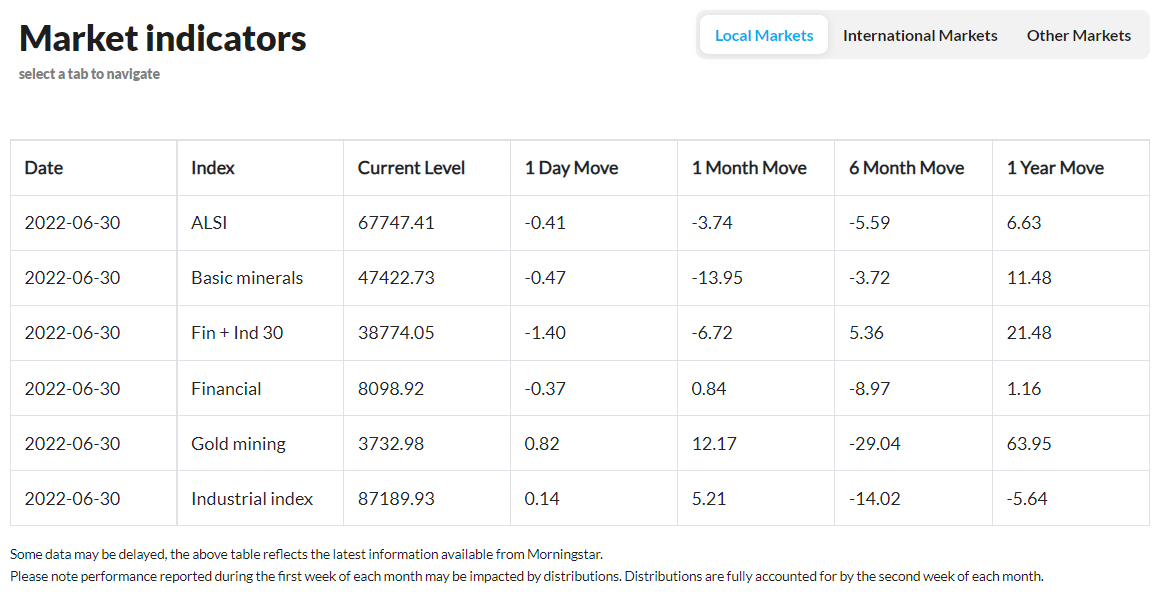