Cold breakfast cereal first emerged in the late-1800s, and the industry has been steadily growing ever since, with profit margins hovering around 50%. Though sugary and often lacking in basic nutrients required for a healthy breakfast, the morning treat has caught on like wildfire, expanding from 160 options in 1970 to over double that number in 1998.

Today, the big players are Kellogg’s, General Mills, and Post, but this wasn’t always the case. In the early days of breakfast cereals there were other smaller brands that are all but forgotten today. And this is not to mention all the many cereal formulations retired by the big three manufacturers that are no longer on supermarket shelves, completely foreign to younger generations.

Sir Grapefellow cereal was a counterpart to General Mills’ other cereal, Baron Von Redberry. The cereal was made of artificially flavored grape-flavored oat bits, along with “sweet grape starbits” which were marshmallows. 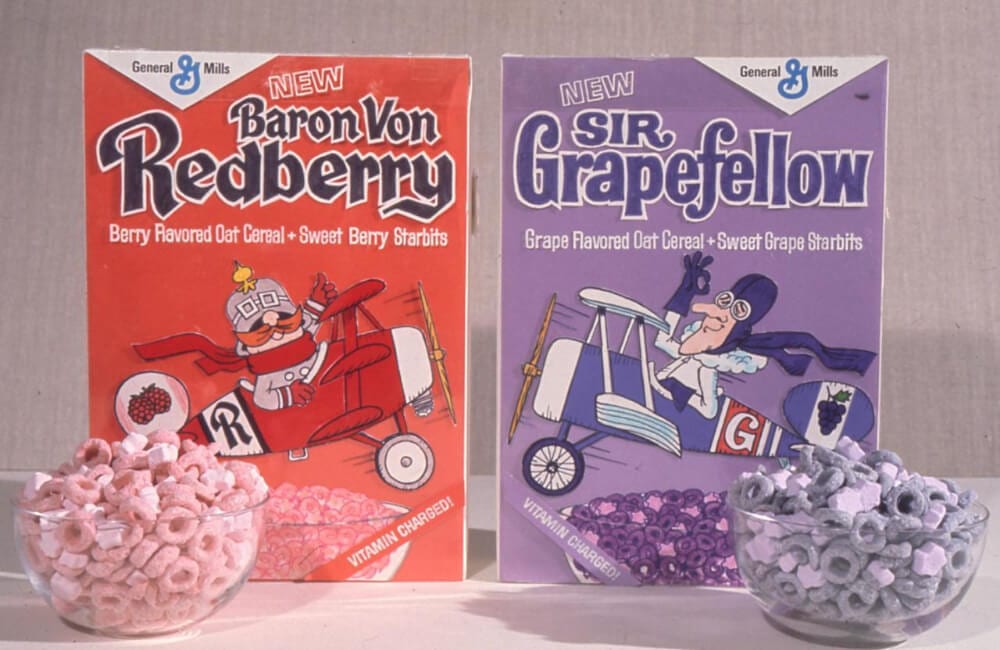 Dinky Donuts Cereal was yet another cereal in the classic donut shape following in the Cheerios tradition. Ralston first marketed the brand with an image of three children on the box, featuring the words “Approved by our distinguished panel of experts.” 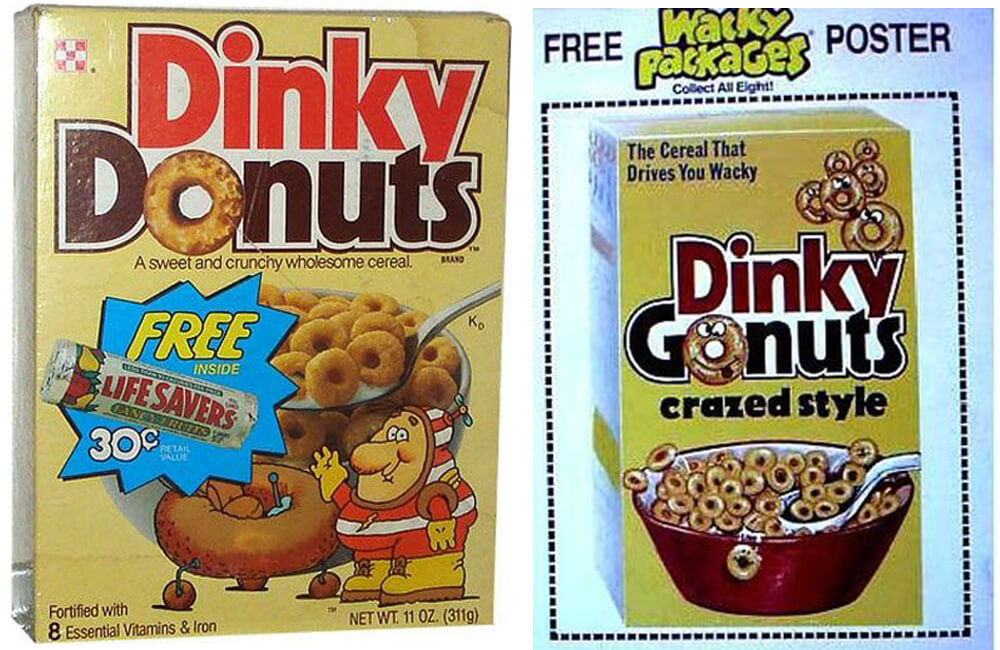 For reasons not disclosed, they decided to change up their branding soon after release, instead using a cartoon figure in a red and white striped outfit. The sugary cereal even came with a free package of Lifesavers candy inside each box, adding yet another sugary incentive to buy the product.

Frosty O’s were first marketed as a sort of miniature donut in breakfast cereal form. The sweet circles were described as “goodness in a sugar-charged oat cereal”, which would never fly in today’s health-conscious climate. 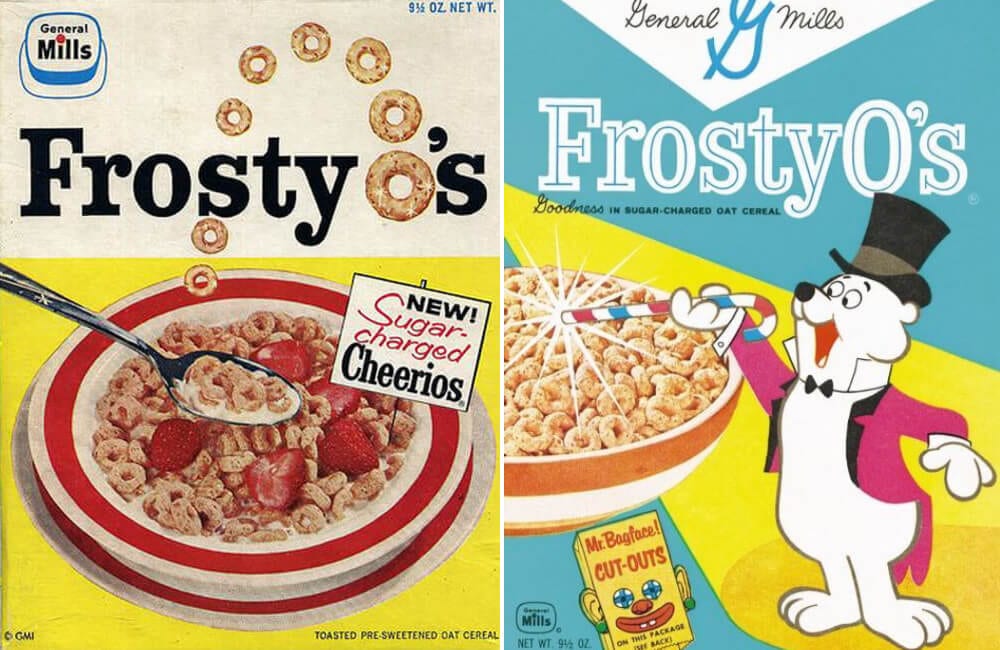 General Mills later went on to rename Frosty O’s as Frosted Cheerios, piggybacking off the success of their staple oat cereal, Cheerios.  Cheerios were first rolled out in 1941 as CheeriOats, and have been a fixture of the cereal aisle ever since.

Another example of a cereal marketed for being sugary as if it were a positive thing, Sugar Jets were a combination of Wheaties and Kix cereal, sold by General Mills. Called Sugar Smiles originally, the name was later changed to Sugar Jets for reasons not disclosed by the company. 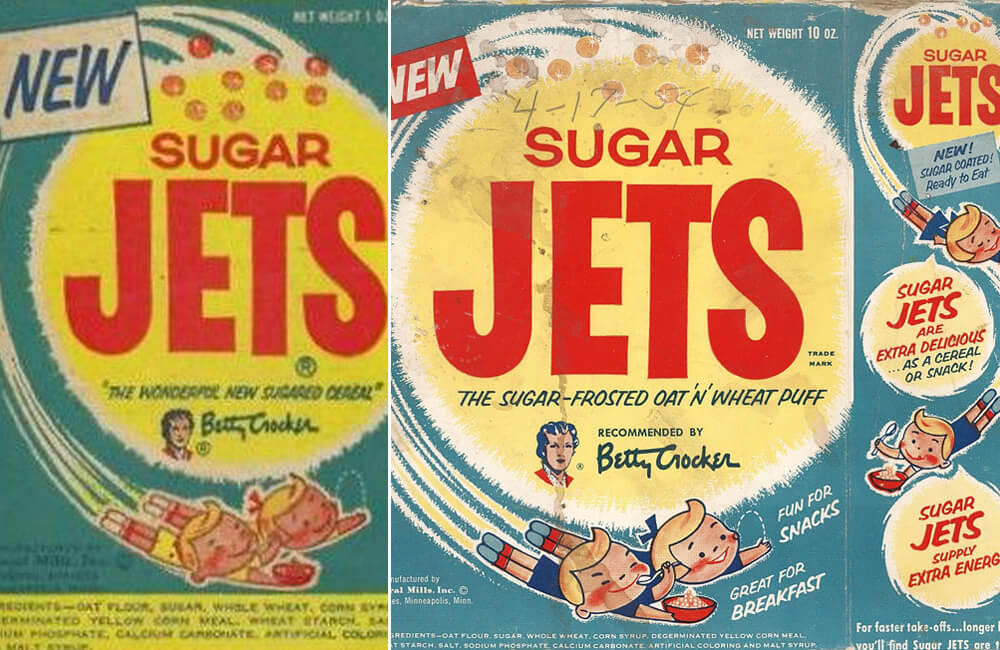 General Mills used the ad copy “Space-Age Shapes In A Sugar-Toasted Oat Cereal” to sell the cereal, again banking on the fact that consumers were indeed actively seeking out high sugar cereals to feed their children, and snack on themselves.

Wackies cereal was a unique breakfast cereal at the time of its debut. Made of oat flakes with banana-flavored marshmallows mixed in, many commercials referred to the cereal as “Banana Wackies” though the word “Banana” never actually appeared on the box. 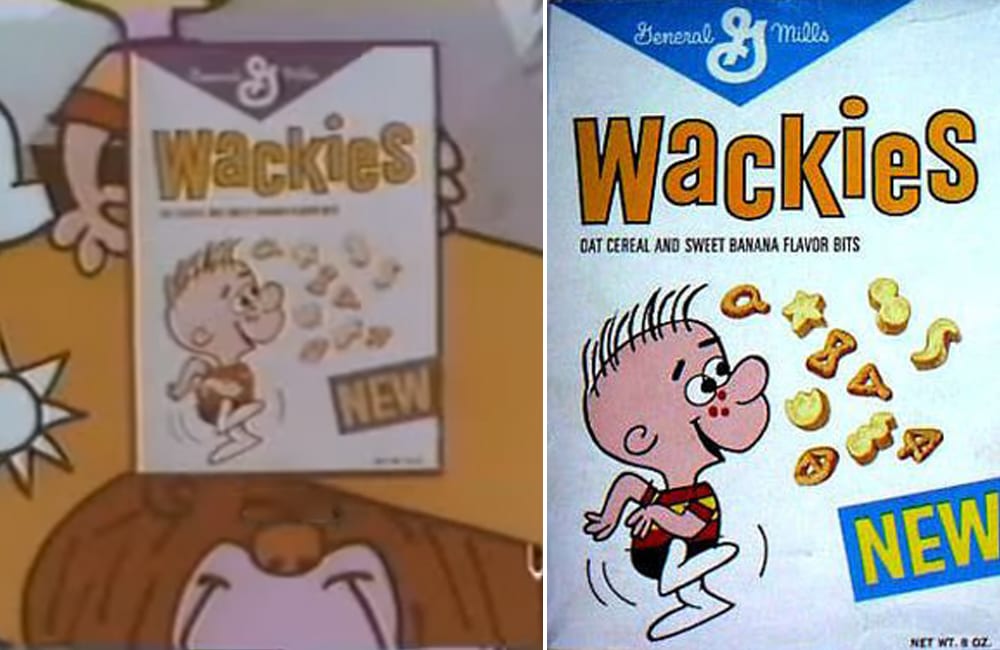 The oat pieces and marshmallows in the cereal came in several different shapes, which was unusual for a cereal at the time as it required many different machines for manufacturing. Shapes varied from letters to symbols to random squiggles, giving the quirky cereal its “wacky” name.

Crazy Cow Cereal brought a new concept to the world of cereal. Unlike Cocoa Puffs where the milk would incidentally turn brown and lightly chocolate-flavored due to the cereal soaking in it. Crazy Cow was covered in a coating that was intended to dissolve into the milk, giving it a bright color and flavor. 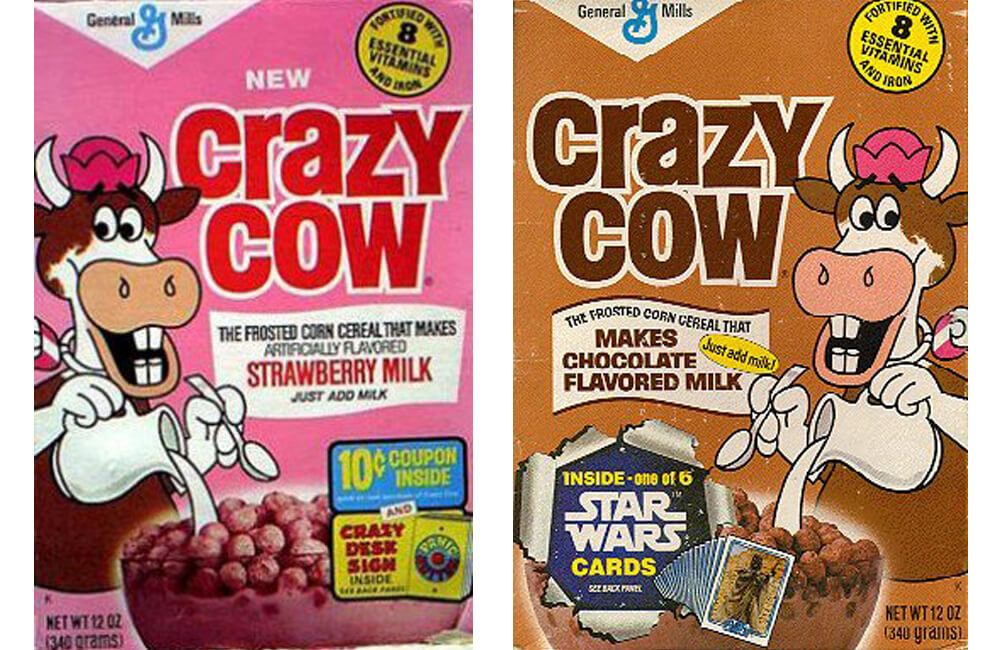 General Mills Crazy Cow Cereal came in a chocolate flavor and a strawberry flavor, though both were entirely artificially flavored, not containing an ounce of real chocolate or strawberry. The box featured a colorful cow mascot who wore a pink hat.

Mr. T Cereal came out in the mid-eighties, and happened to be the first cold cereal ever produced by Quaker Oats. Unlike other cereals on this last that retain the classic shapes–donuts, balls, or wheat shreds–this corn and oat cereal was shaped like the letter T. 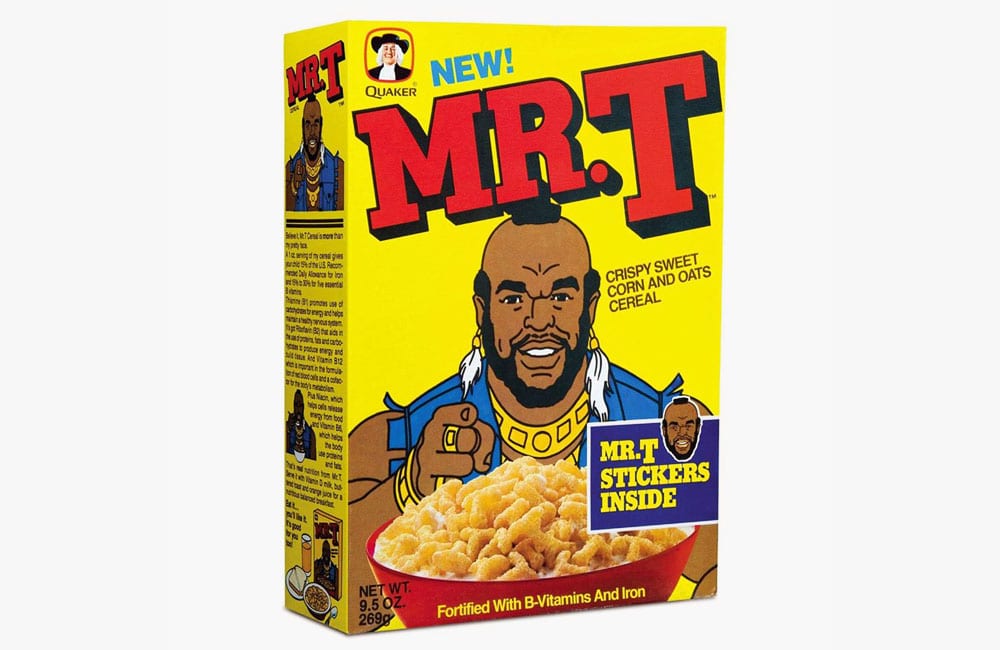 Quaker designed the cereal to appeal to eighties kids who admired Mr. T after his roles in movies like Rocky III and The A-Team. Every box had a cartoon-drawing version of Mr. T on the front, as well as Mr. T stickers inside. The brand even marketed the cereal with Mr. T’s catchphrases like “I pity the fool who don’t eat my cereal”.

Another of the “monster” line of cereals by General Mills, Franken Berry Cereal is a strawberry-flavored breakfast cereal featuring the likeness of Frankenstein’s monster on the front of the box. The cereals reemerge each year around Halloween, with their boxes getting an updated design in 2014. 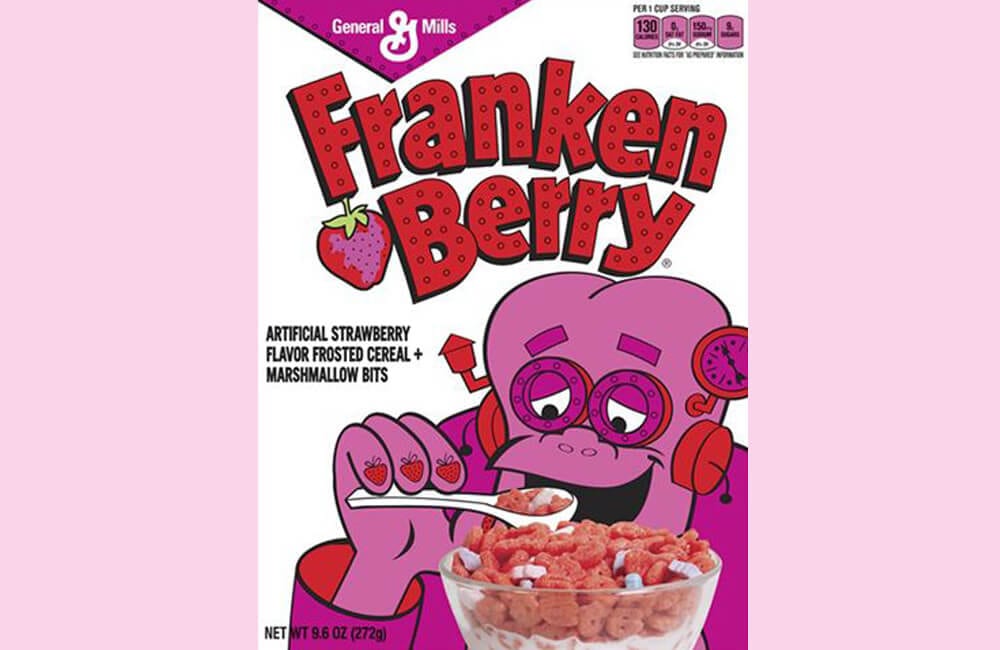 General Mills had to alter their recipe for Franken Berry Cereal early on in its production after encountering a peculiar problem. Children who ate the cereal were reporting bright pink stools, which was a consequence of using a certain pink food coloring that is indigestible.

Cocoa Hoots are best described as a chocolate version of Cheerios cereal. The crunchy Kellogg’s cereal was represented on the box by the mascot Newton the owl. Children of the seventies recall that the cereal came with a pack of traffic sign-related stickers in every box. 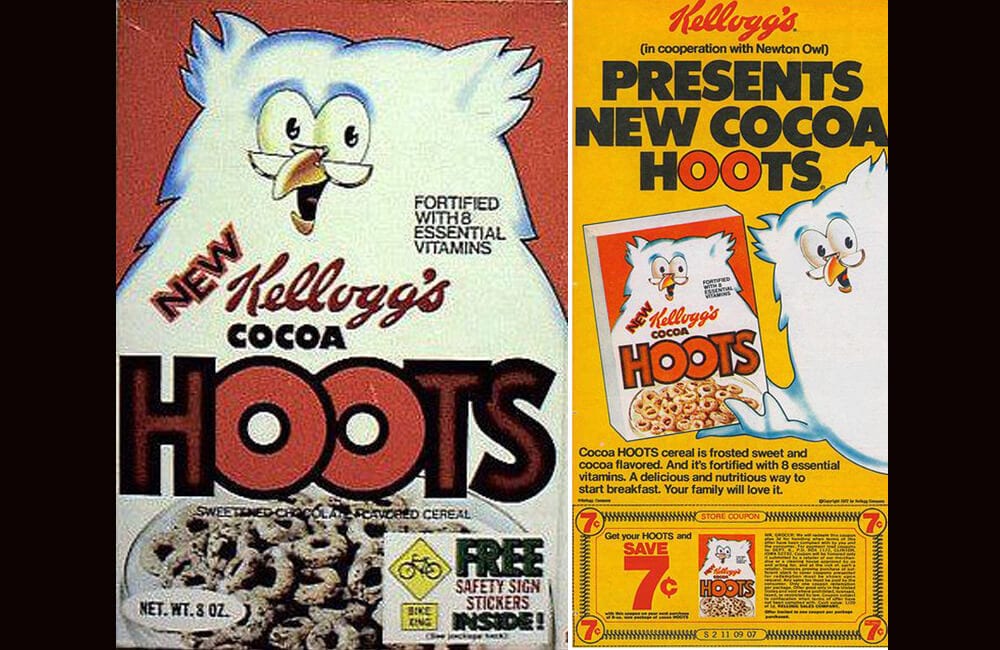 Kellogg’s pulled the cereal only a matter of years after releasing it, leaving fans confused as to what happened to the delicious chocolate-y cereal. Perhaps it simply couldn’t compete with Cocoa Puffs and Cocoa Krispies, both of which came out decades earlier in the 1950s, or Kellogg’s had a greater plan to introduce something new.

The Smurfs first appeared on TV in 1981, just two years before the cereal with their likeness on it came out. The Post cereal featured Papa Smurf on the box, and was marketed on TV with the jingle, “Smurf Berry Crunch is fun to eat/A Smurfy fruity breakfast treat/Made by Smurfs so happily / It tastes like crunchy Smurf Berries/It’s berry shaped and crispy too/In berry red and Smurfy blue.” 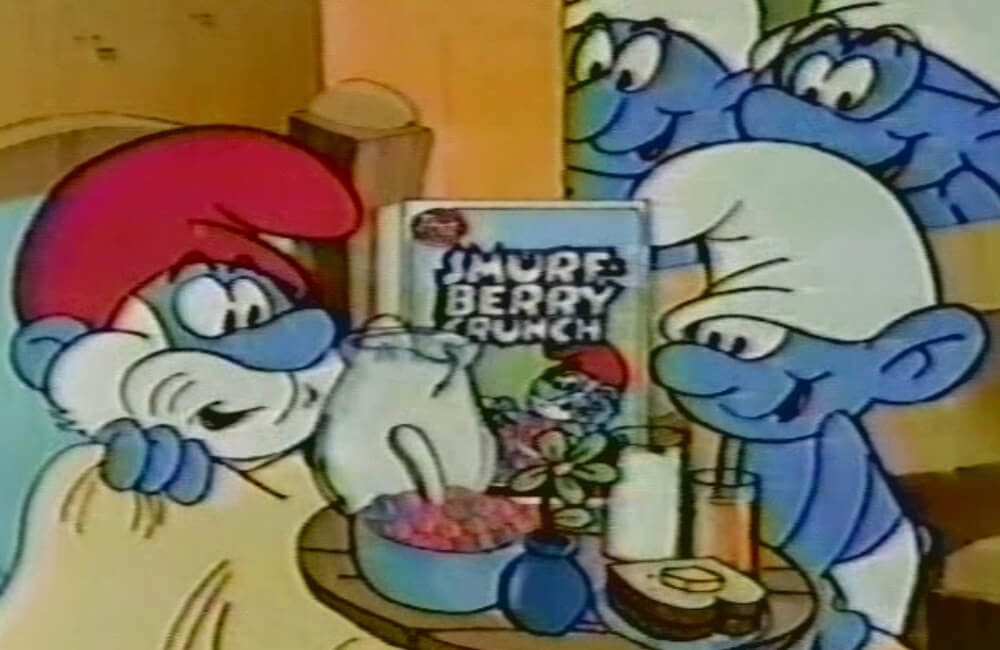 The Post cereal managed to outlast even the television show, which ran from 1981 until 1989, with a second iteration coming out called Smurf Magic Berries in 1987. Perhaps kids urged their parents to buy the cereal because of the bright colors and characters on the boxes, because reviewers say the blue crunchy snack had a chemical taste.

Kellogg’s Corn Soya first debuted in the late 1940s, but rose to prominence in the 1950s, enjoyed by families across America. The simple shredded corn and soy cereal was marketed as a high protein breakfast alternative to other more carbohydrate-dense cereals, which made it ahead of its time. 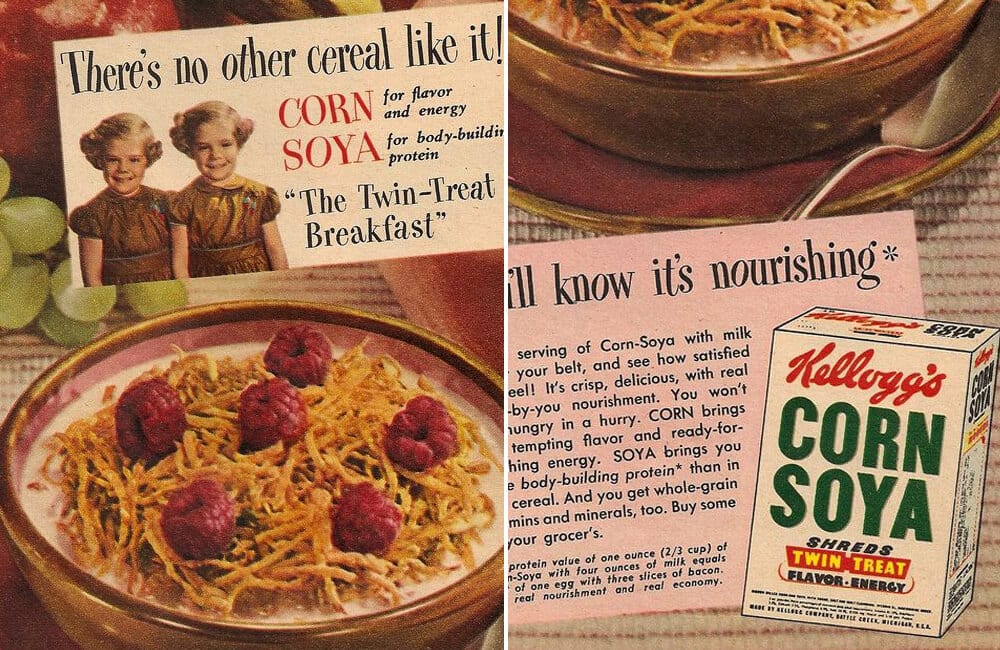 Kellogg’s launched a big advertising campaign for the cereal, with ad copy reading, “When mornings grow crisp, send ’em off to school feeling o-boya! Give em’ substantial Corn-Soya!”. While the cereal is still remembered by many for its light sweetness and crunch, Kellogg’s retired it long ago.

Wheaties may be one of the few cereals on this list still around today, and for good reason. The classic cereal was on the market as early as the 1920s, feeding America throughout the great depression. It was first introduced as “Washburn’s Gold Medal Whole Wheat Flakes”. 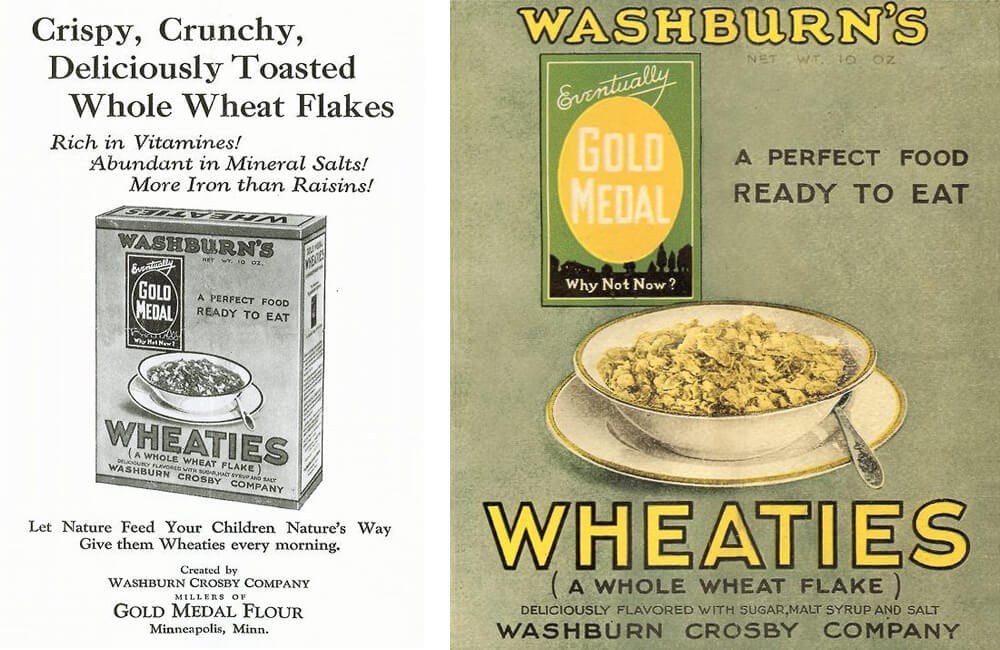 Despite the fact that it’s made of simple carbohydrates and as such provides little athletic edge, General Mills made the connection between Wheaties and athletes as early as 1927. After nearly a decade of advertising on sports radio programs, Wheaties had the first athlete on their box in the 1930s, starting with Lou Gehrig. 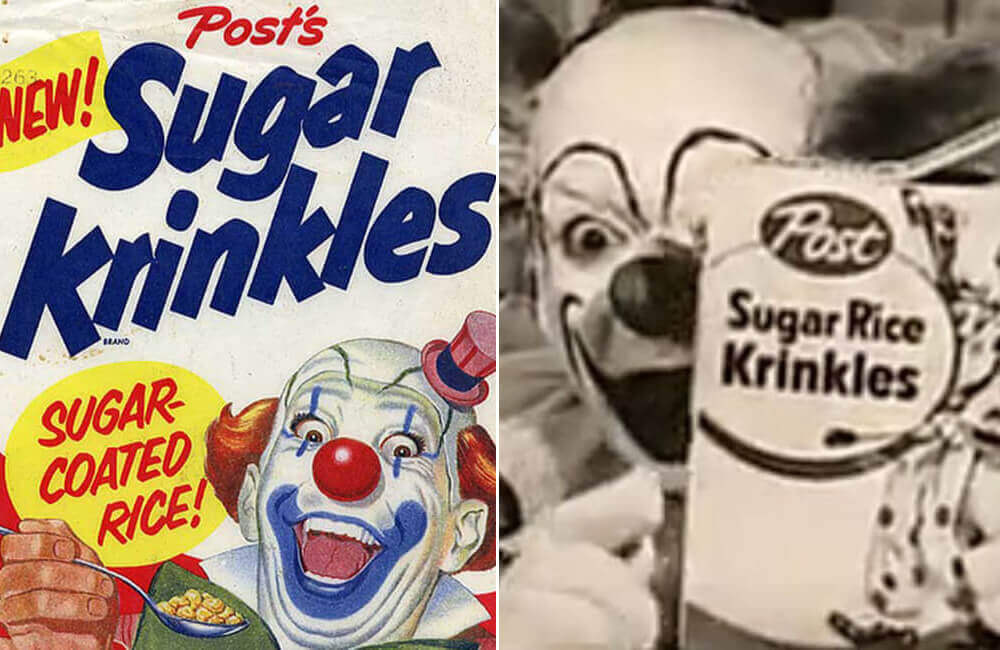 Post took Sugar Rice Krinkles off the market in 1969, in order to replace the cereal with the now-ubiquitous Fruity Pebbles, which use the same machines for manufacturing. Few even amongst cereal lovers know that before there was a clown mascot, Sugar Rice Krinkles had  a vaguely racist mascot of a rice-loving Chinese boy.

Nintendo teamed up with Ralston Cereals in 1988 to launch their “Nintendo Cereal System”, a breakfast cereal that was a fun play on the popular gaming console. The box featured Nintendo’s most popular games at the time, The Legend of Zelda and Super Mario Bros. 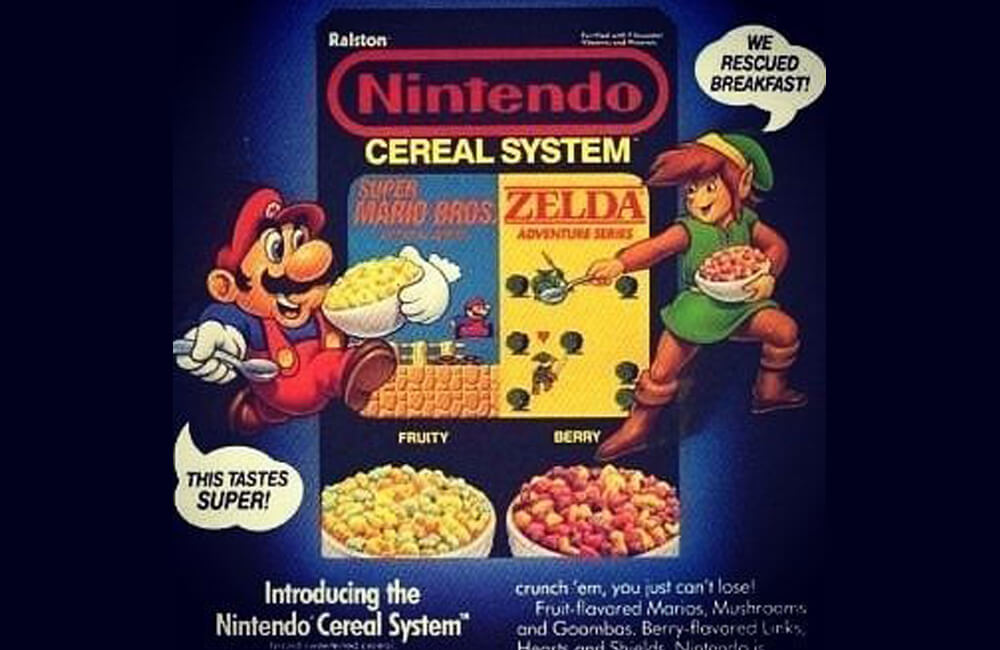 Over the years, gaming collectors have scoured the internet for a box of the cereal, which has attained collector’s item status. On eBay a box of the cereal can fetch up to $200. Within each cereal box are two separate bags, each containing a different cereal flavor to relate to each of the games on the front of the box.