We’ve all made some unexpected discoveries before. Maybe you found $20 in a coat pocket you didn’t use, or you stumbled upon a surprise family heirloom in your basement while cleaning. Just like your findings, the discoveries on this list all came by surprise. They range from weird to invaluable, encompassing everything in-between.

Many of these discoveries are the stuff of Netflix documentaries and movies. While some of these findings were the result of pure luck, others came from hard work and determination. Hopefully, this list inspires you to keep your eyes open and indulge your curiosity. Who knows? Maybe you’ll find something awe-inspiring, too.

Tiahuanaco in Bolivia and its historical ruins have led to quite a few discoveries, and excavations have continued for years by both private companies and the government. In 2015, one of the most shocking findings at Tiahuanaco was an underground pyramid. Archaeologists discovered it with the use of ground-penetrating radar. 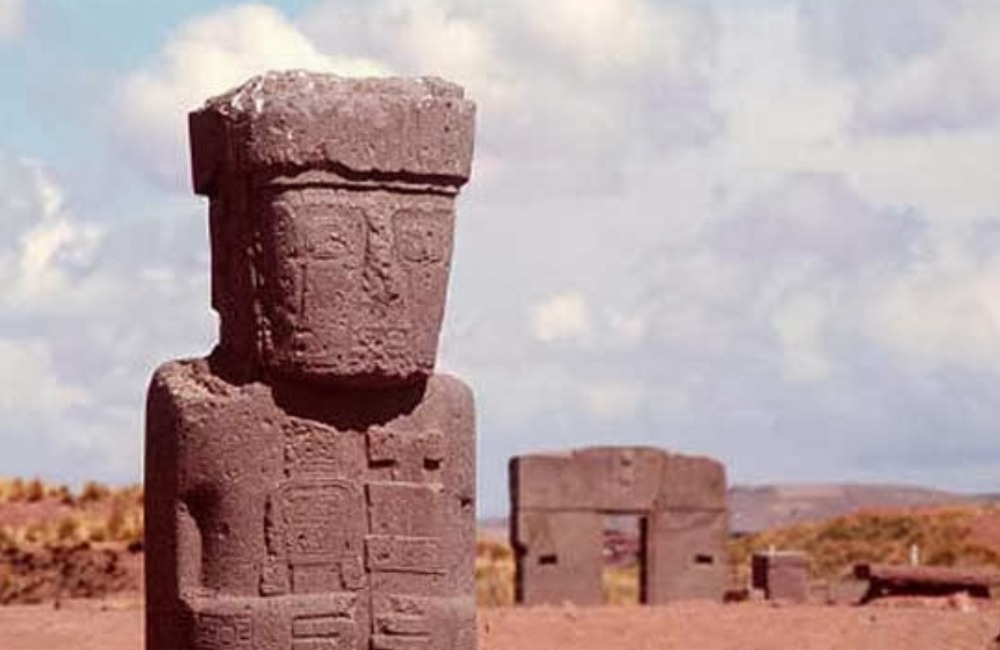 They also found monoliths within the pyramid. Excavations into this belowground pyramid are still ongoing. Tiahuanaco was once home to ancient South America’s most important city. The city spanned 231,000 square miles, and finds from this massive historical site have included stone monuments, palace ruins, sculptures, and more. Since 2000, Tiahuanaco has been a UNESCO World Heritage Site.

Contractors who were demolishing a former pub in Watford, England stumbled upon an unusual discovery in the chimney section of the building. This creepy, folklore surprise was a witch bottle, stuff with an unidentified liquid, teeth, and shards of glass. The bottle was thought to date back to the 1800s. 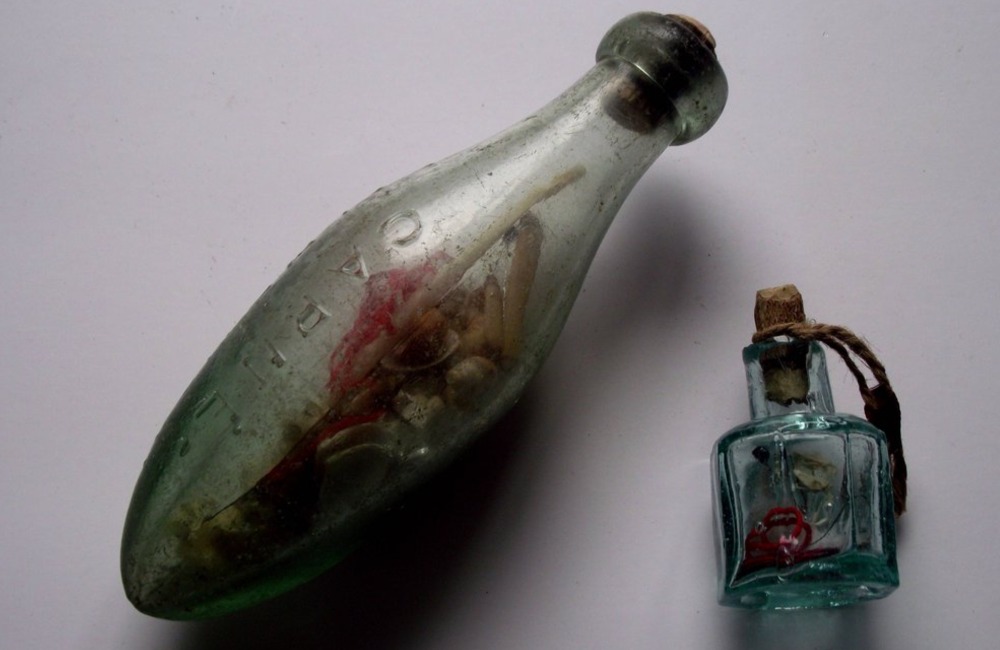 It was likely placed in the pub to ward off witches. Considering that this Watford property was the birthplace of the Witch of Saratoga, that makes sense. Angeline Tubbs was the Witch’s real name, and she relocated to Saratoga, New York in 1761, where she made a living reading fortunes and making witch bottles to scare off the competition.

Humans worry about dead wildlife washing onto the shores, as that could be a sign of a problem with the water quality. Who knows what a gigantic, eight-foot, ominous Lego man means? This potential portent of doom was discovered by a Japanese surfer. Forebodingly, the Lego man was wearing a t-shirt that said, “No Real Than You Are” on the front. 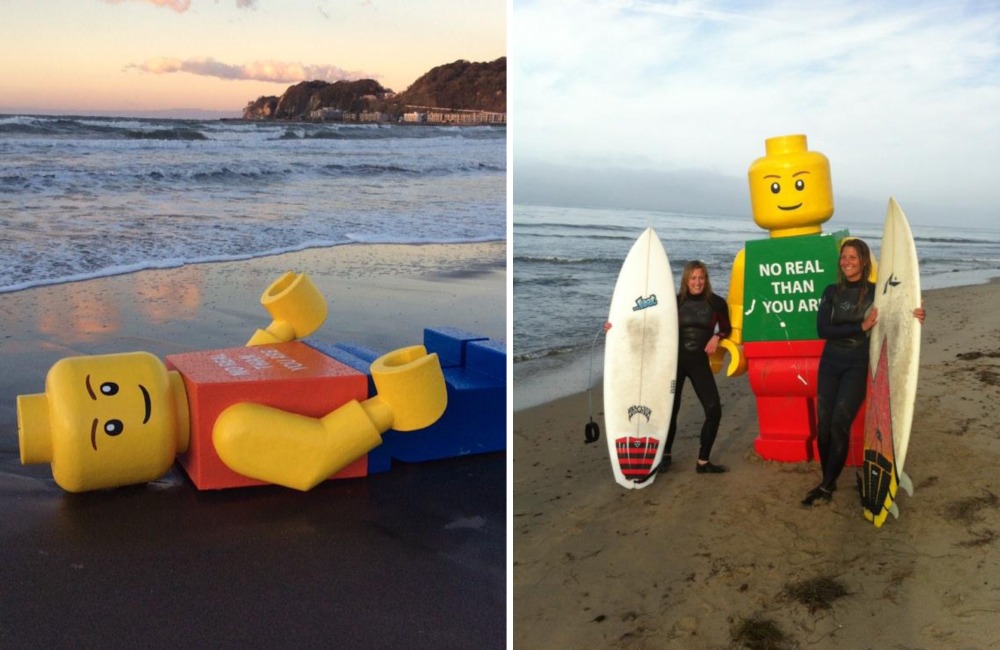 Rather than blame aliens, it appears that the man behind this gigantic Lego is a mysterious Dutch artist named Ego Leonard. This artist, according to his website, comes from a “virtual world.” Believe it or not, this is far from the first time such a gigantic Lego has washed ashore. These behemoths were also found on beaches in Siesta Key, Florida, and Topanga Beach, California.

While venturing through a remote jungle in the West Sumatra region of Indonesia, conservationists discovered the largest flower bloom in the world. The species of flower is Rafflesia tuan-mudae, which is known for its massive, elusive blossoms that bloom for just one week at the end of the plant’s life span. This mammoth flower had a diameter of 3.6 feet, making it the largest Rafflesia ever documented. The flower is easy to spot, as it has flesh-colored petals covered in white spots. This unflattering description matches the flower itself, as it is part of the “corpse flower” type of flora, which means it smells like a dead body.

We all mocked Sharknado when it came out in 2013, but it seems as though Thunder Levin got the last laugh in the end, as maybe his movies weren’t so fictional after all. A shark did fall from the sky (a year before those movies came out, no less), landing near the twelfth tee of a golf course in California. 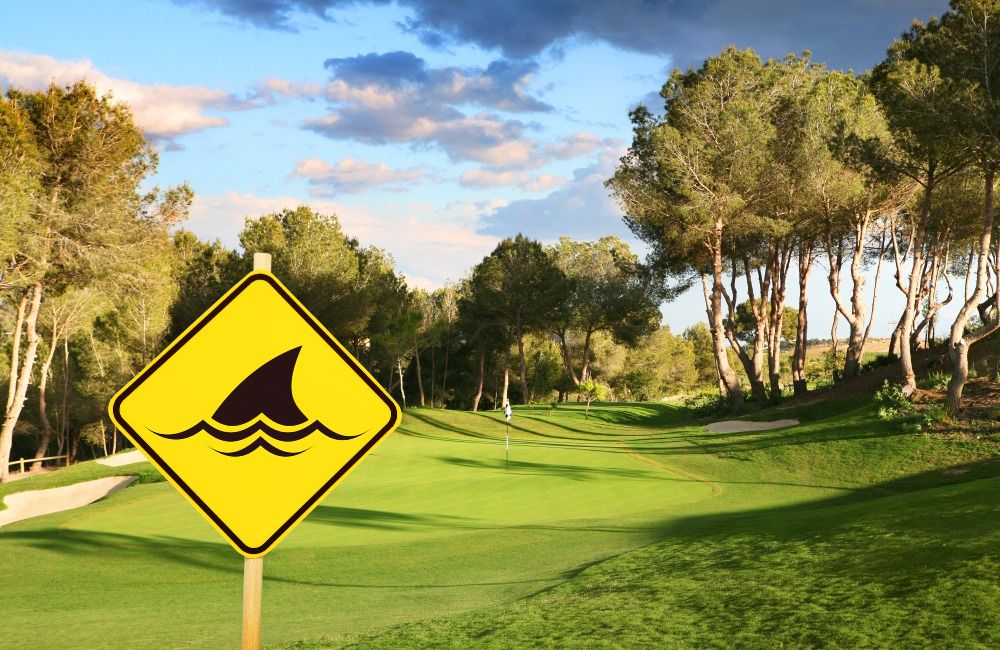 The San Juan Capistrano Golf Course workers were stunned when the two-pound leopard shark dropped onto the turf. As it turns out, the leopard shark, found alive, was carried from the ocean by a bird that accidentally dropped it. Cart attendants put the confused fish into a bucket of salt water and drove it to Baby Beach, where they released it back into its rightful habitat.

Finding a river in the ocean might seem like a bit of an oxymoron. After all, isn’t the ocean all water? Well, be prepared to be surprised, as divers discovered an underwater river hidden underneath a cloud of toxic gas off the coast of the Yucatan Peninsula. 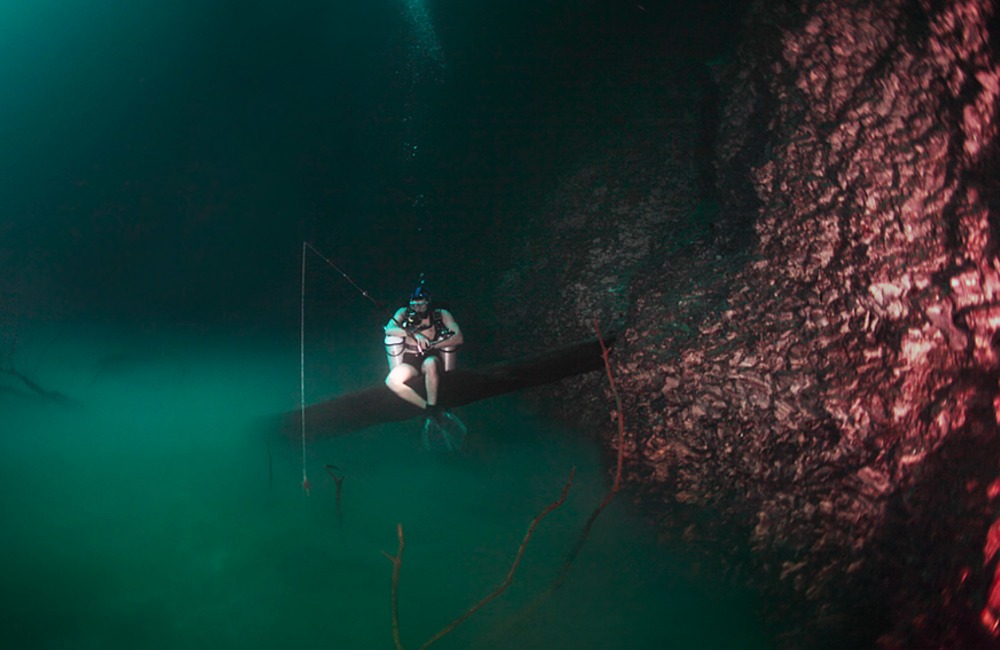 The river’s source is the Cenote Angelita, a massive sinkhole. Apparently, ninety feet beneath the surface, this river flows out to the ocean. Surrounding it is a blanket of hydrogen sulfide that would instantly kill anyone who attempted to breathe it in. To make the scenery even creepier, petrified trees and even a small skeleton are located in the noxious cloud. Ancient Mayans believed the Cenote Angelita was a gateway to Hell, and perhaps they had a point.

When you think of places where you’d find a ship, the Namibian Desert is probably last on your list. But, believe it or not, that is where the remains of the Bom Jesus were found. This Portuguese ship disappeared five-hundred-years ago when it sank off the coast of Namibia. As the coastline waters receded, the Bom Jesus reemerged. 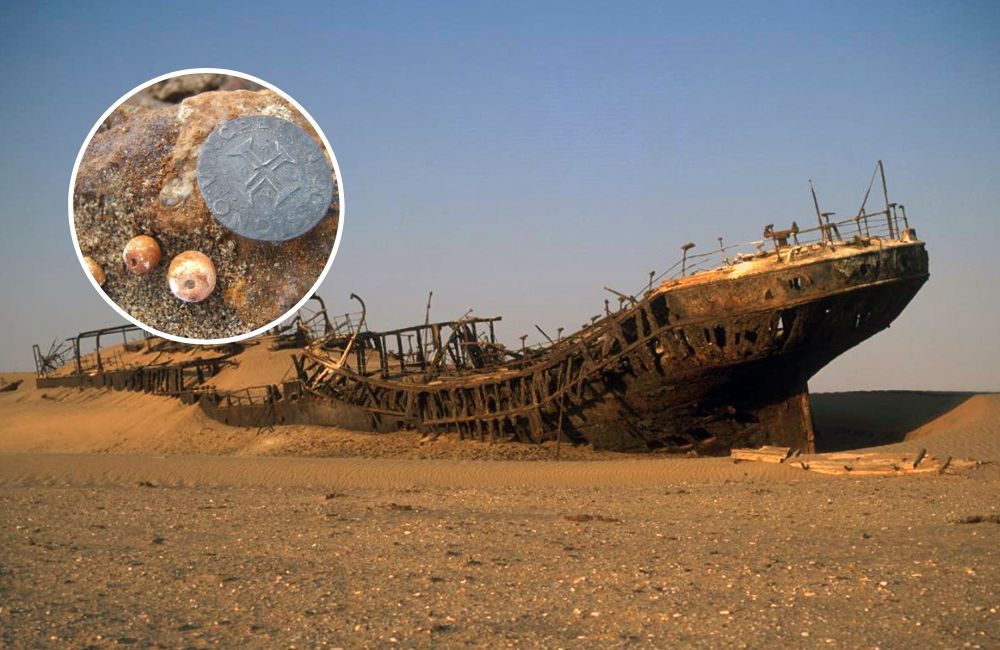 When it sank in a fierce storm, it was on its way to India laden with treasures like gold and copper ingots. Diamond miners discovered the ship and alerted the Namibian government, who sent out a team to dig up the wreckage. Two-thousand pure gold coins and tens of thousands of pounds of copper ingots were discovered on the Bom Jesus, almost all intact.

The Paris Catacombs are a labyrinth located in the heart of France. The Catacombs were built when the city needed a better location to store the dead. So, Paris chose tunnels, five stories underground, into which they emptied bodies beginning in the late 1700s. 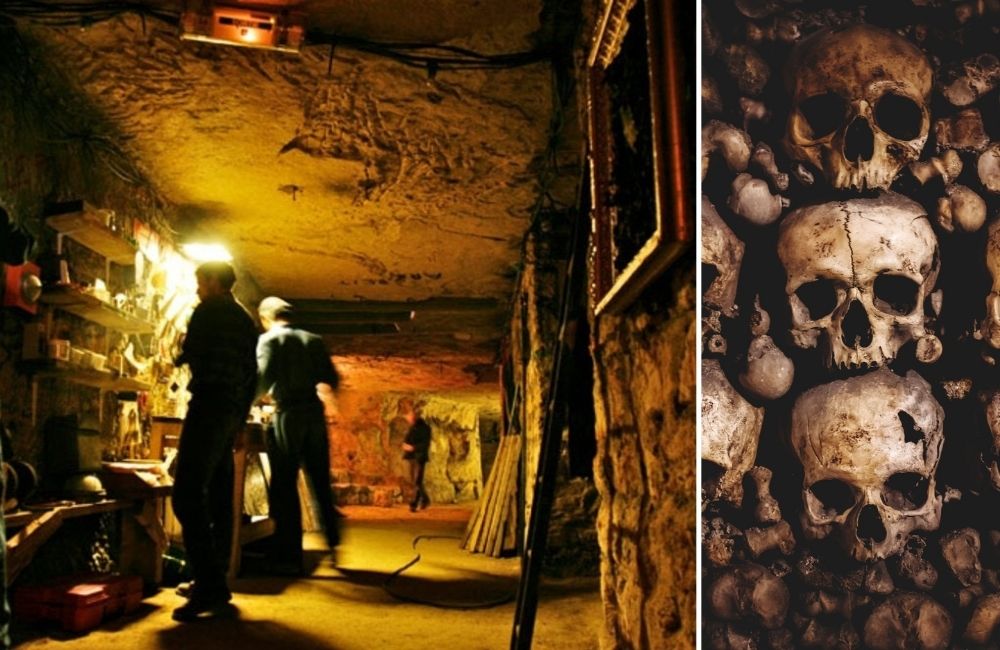 That background makes this discovery extra eerie. In August of 2004, Parisian police doing a training exercise discovered a fully-equipped movie theater in one of the Catacombs’ formerly-uncharted caverns. Terraces were cut into the rock to form an amphitheater, in which projection equipment, a full-sized cinema screen, and a variety of thrillers and noir films were found. The films were neither offensive nor banned; it seems as though someone just wanted to set up their own creepy, private theater.

This unusual discovery seems as though it would be the beginning of a horror movie. In Shropshire, England, Pat and Diane Farla were having a Good Friday party when one of them decided to finally look behind the six-foot-long rectangular plate on their wall. Believe it or not, they hadn’t looked behind there in the three years they’d owned the home. 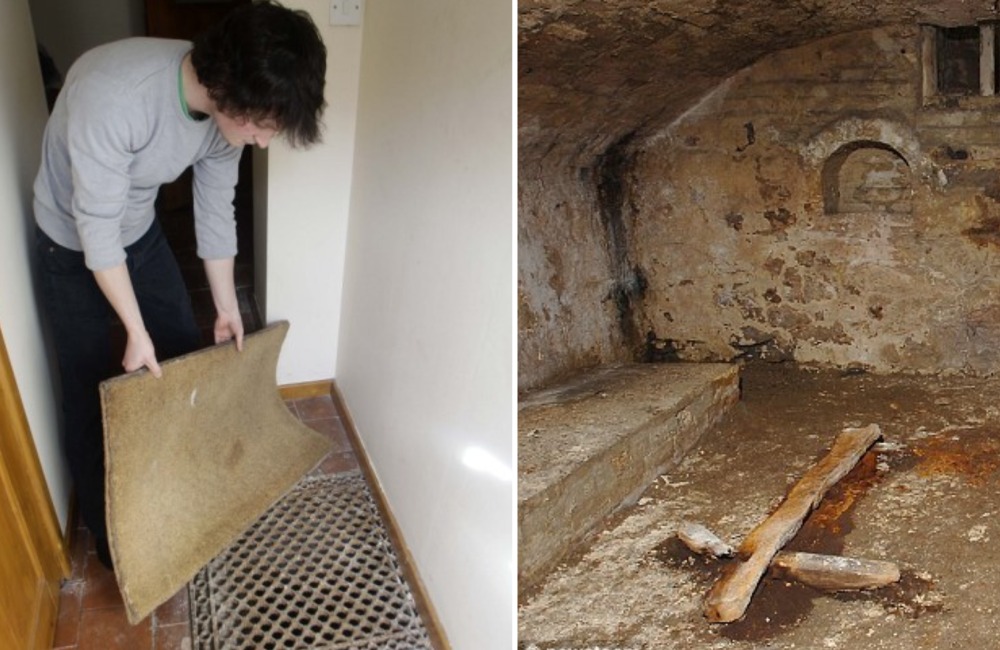 After pulling the plate away, they discovered a hole that led them to a tiny, underground chapel. The cellar-like contraption had pews and a cross, confirming that it was of a religious nature. Authorities believe that this underground church could have been used centuries ago by congregations fleeing religious persecution during one of England’s many religious wars.

A team of archaeologists using ground penetrating radar discovered something unusual buried on a farm in Norway. They found that, below the surface of the frigid earth, there was a ship that dated back to either the Merovingian or Viking Period. The ship was only buried two feet below the ground. 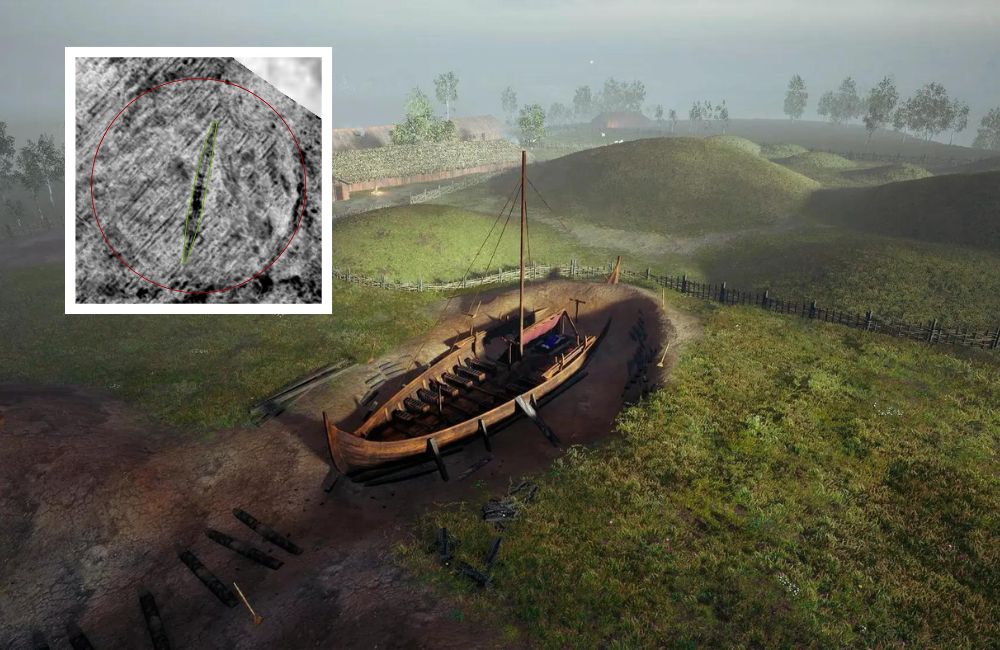 The archaeological team was there for a totally different expedition, and they pretty much found this ship by mistake. It was part of a burial mound from one-thousand years ago. Their deep-radar technique was the same one used to find the GJellestad Ship, also located in Norway.

A couple in Phoenix, Arizona were renovating their kitchen when they discovered a strange safe hiding behind the wall of their kitchen. When they opened, they found not only $50,000 and liquor, but also the directions to a treasure hunt. 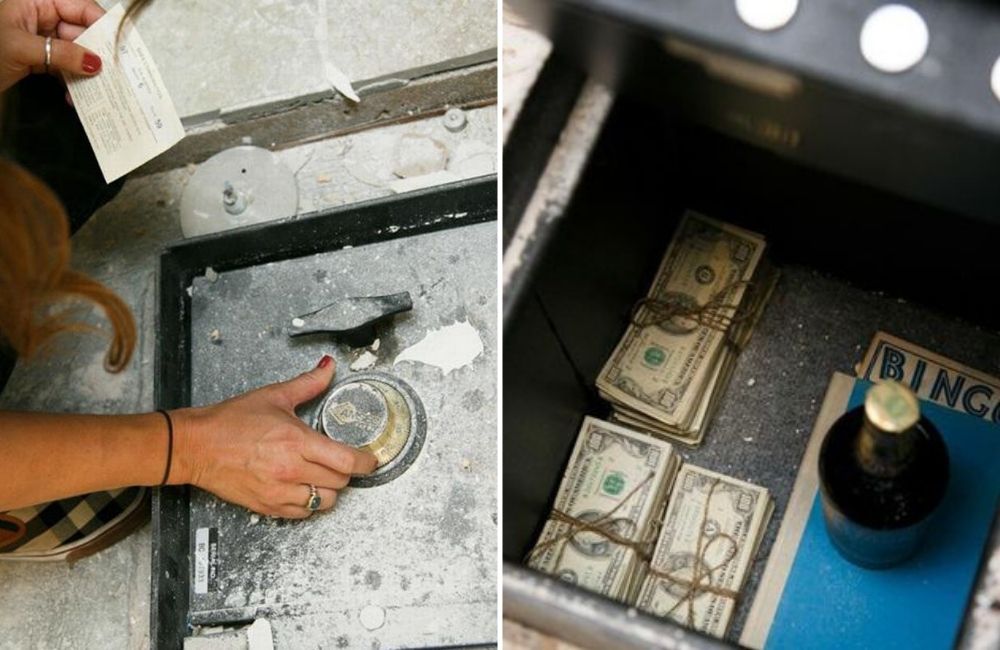 The $100 bills were joined by a bottle of bourbon from the 1960s. The last item in the safe was A Guide for the Perplexed by E.F. Schumacher, a novel published in 1977. Passages were outlined in the book, which came with a map of Arizona and a Bingo card with numbers outlined. So far, the couple has yet to crack the complicated set of clues.

When homeowners in France were sorting through their attic, they spotted an ornately decorated, beautiful porcelain vase. The vase had gone unnoticed for years, but, when the couple saw it, they had it taken to Paris for a Sotheby’s appraisal. 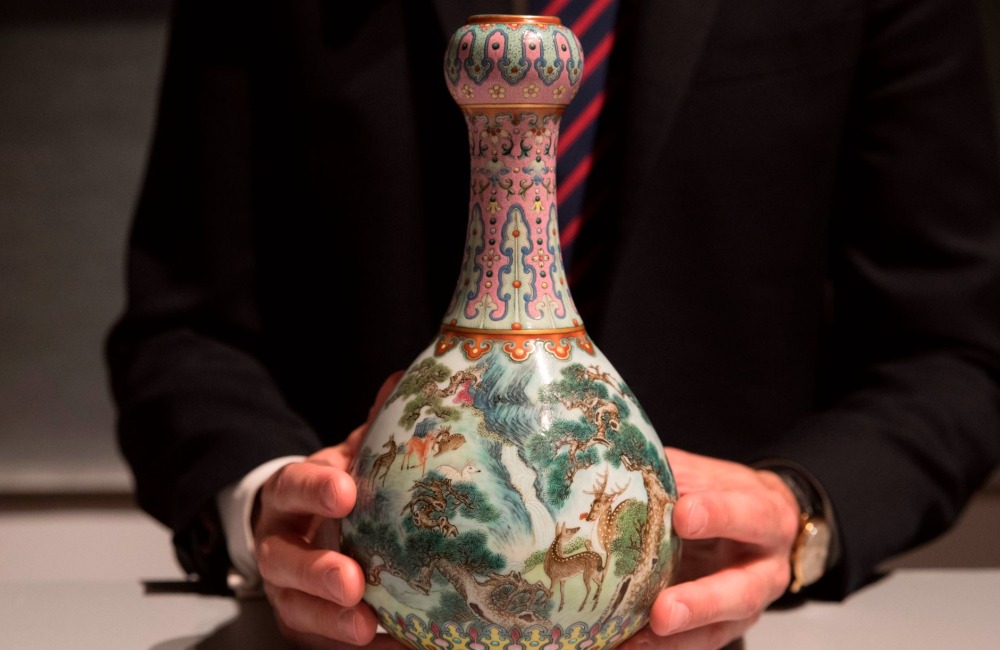 Sotheby’s discovered that the vase was an original work of art from the Qing Dynasty, and they appraised it at $590,000 to $825,000. But, this hidden treasure would go on to sell for far more than its value, as an auction buyer scooped it up for a winning bid of $19 million. This piece must truly have been one-of-a-kind to fetch that price.

Two brothers were going through their father’s home in a postmortem excavation when they discovered something surprising hidden within the walls. It was an original Norman Rockwell painting. But, this Rockwell matched the one hanging on the wall just a few inches away. 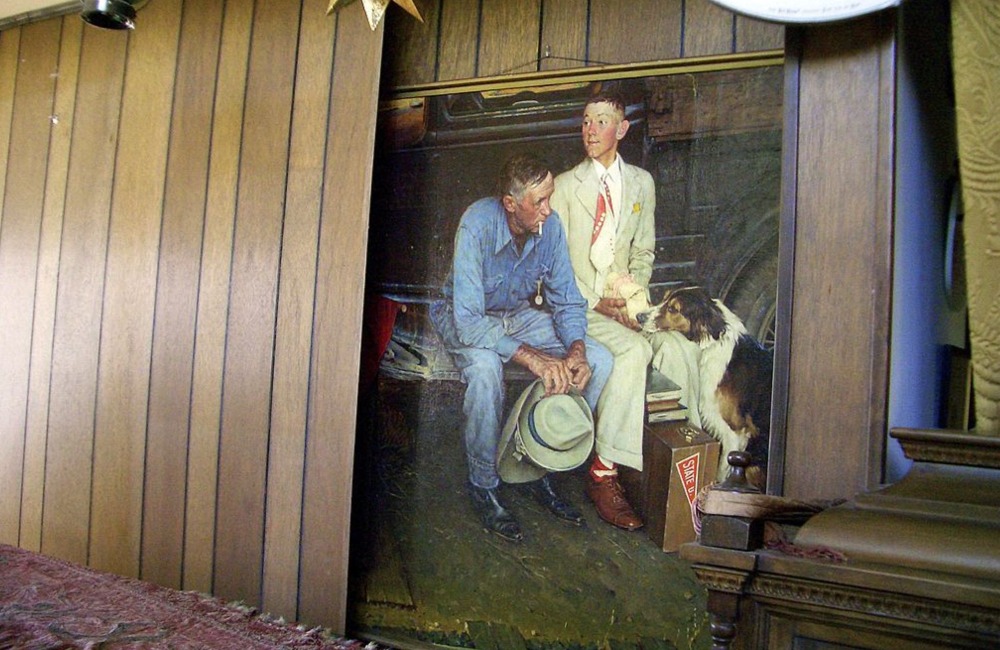 As it turned out, the brothers’ father was hiding the pricey original from his ex-wife during a divorce. He hid the real Rockwell in the wall, putting up a convincing fake in its place. There it hung for years until the father passed away. Later at a Sotheby’s auction, this painting, titled “Breaking Home Ties,” sold for $15.4 million.

This priceless literary artifact was lost for over a century before it was discovered in a trunk in an attic in 1991. The 665-page document was written by hand by famous author Mark Twain. This copy of Huckleberry Finn deviated widely from its original source text, shaking up what we thought we knew about modern literature. 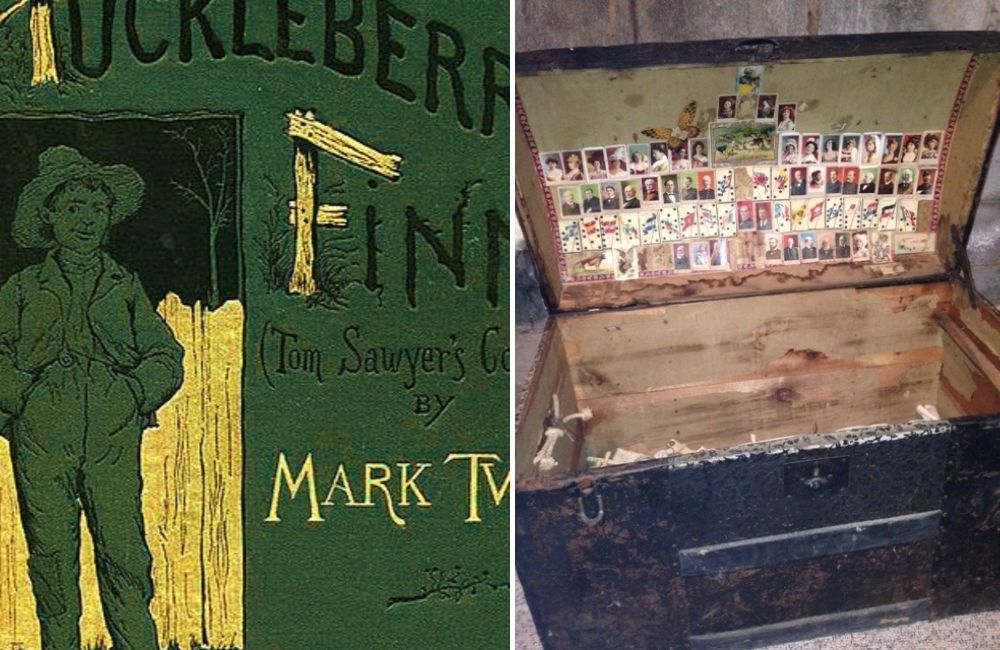 The Mark Twain Project at U.S.C. said that they “believed” the manuscript would never be found, as Twain himself had sent it to Buffalo, New York, where it vanished. The owner of the trunk was the granddaughter of one of Twain’s close friends, and she immediately turned it over to Sotheby’s for authentication.

Weddings That Got Derailed In The Worst Possible Ways
Ah, marriage. It has its ups and downs, but most people would agree that it is one of the pinnacles of modern society. There are around 2.5 million weddings a year in the United States, and, as you can imagine, not all of these weddings go off without a hitch. Sure, some are the picture […]
Popular Retail Chains That Have Closed Dozens of Locations in 2022
Every business owner knows that everything can change on a dime, regardless of how big the brand is. Over the past few years, online shopping and other factors have had a huge impact on how companies with brick-and-mortar stores operate. Some have flourished, while others have struggled to stay afloat. As we move into 2022, we’ve […]
Inexpensive Things You Can Do With Food (Besides Eat It)
Food has been used to expose everything from beauty care secrets to household cleaning hacks over the years, but there are always new discoveries of how best to utilize every last bit of food while wasting as little as possible. Whether you’re looking to add a little spice to your sex life with a coconut […]
Iconic Buildings That Were Totally Demolished
Buildings aren’t just bricks and mortar, they can be important reminders of iconic times in history. You just have to look at the Watergate scandal to recognize how these locations can become larger than life, cemented in the very foundations of public consciousness. Oftentimes, millions of dollars go into creating these elaborate structures…but are they […]
Advertisement