Anytime that a new construction project is in the works it’s imperative to ensure that all safety protocols are being followed. This isn’t simply in order to ensure the workers’ safety, but also the safety of those who will be occupying the buildings in the years after their construction. If even one construction code is not followed properly there is the potential for a horrifying tragedy to take place.

Many accidents have been prevented by safety crews who have discovered faulty workmanship before a disaster can occur, however, they can’t catch them all. Let’s have a look at some of the structures throughout history that weren’t able to withstand the test of time, and ultimately collapsed.

Less than 6 years after its completion, cracks in the ceiling of the Sampoong Department Store’s 5th-floor had already begun to appear. On June 29, 1995, after being notified of the cracks in the building, due to fears of lost income the executives opted not to evacuate the customers, but they themselves thought it best to leave the complex. 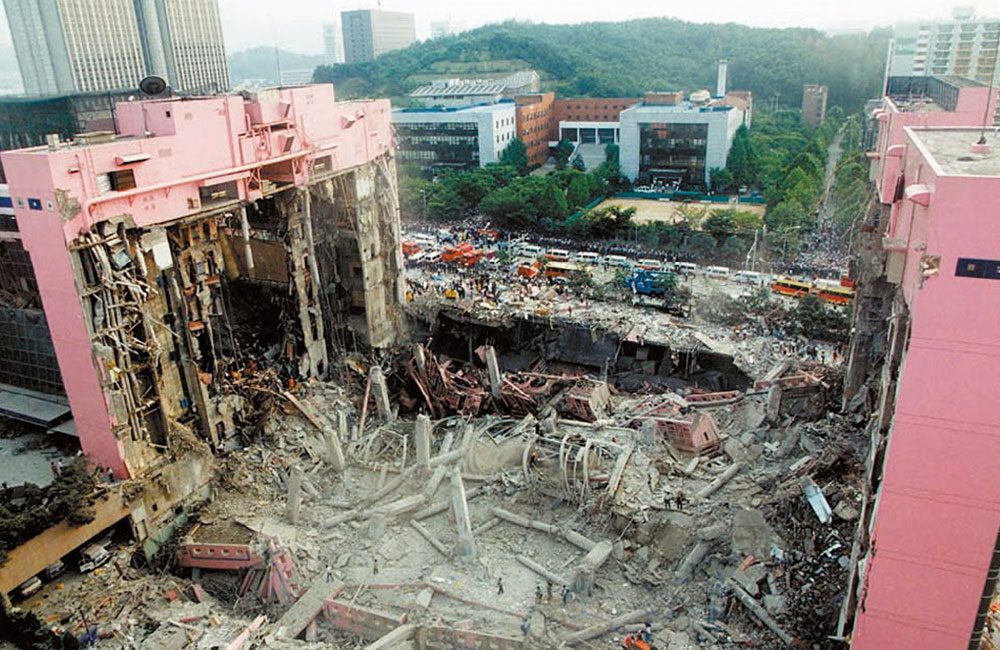 A few hours later, the cracks got worse. It took no more than 20 seconds for the south wing’s support columns to collapse, trapping close to 2,000 shoppers under the rubble. 1,445 people were rescued from the nightmares, however, 502 others lost their lives that day as a result of the building management’s greed and negligence.

Club Heat opened at the end of Pier 34 at the beginning of May 2000. An event that was meant to be a time of celebration quickly turned to tragedy when, about a week after the club opened, the end of the pier along with parts of Club Heat, were on their way to the bottom of the Delaware River. 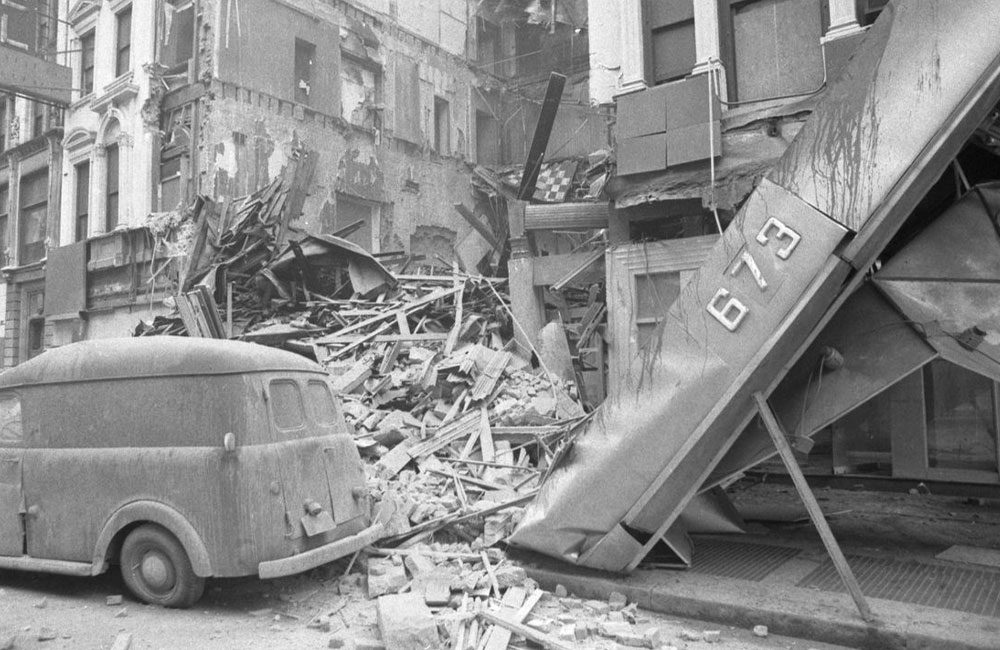 After more than 9 decades of staring off from the Philadelphia bank of the Delaware River, Pier 34 was no more. The collapse of Pier 34 resulted in the deaths of three women and injuring dozens of other people. Sadly, this disaster could have been avoided had the pier’s owner and the club’s manager heeded the warnings that the pier was in danger of collapsing.

The red flags concerning the structural security of Kansas City’s Hyatt Regency Hotel date back to when the building’s roof partially collapsed while still under construction. Due to the neglect of those in charge, the hotel’s two ill-conceived overhead walkways were allowed to continue being built, even though many security measures were overlooked. 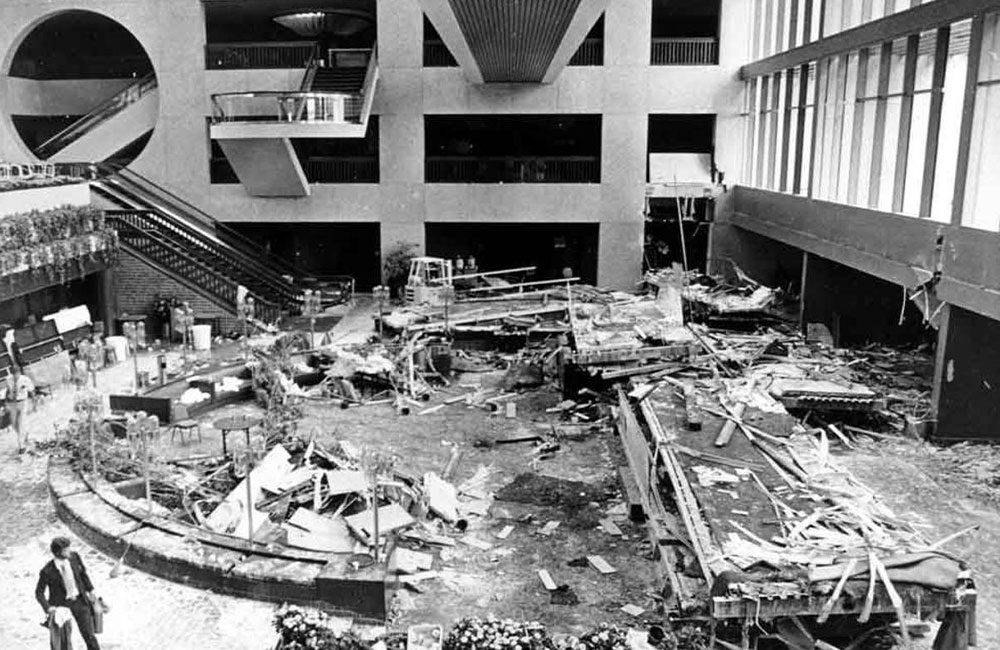 Less than a year after the Hyatt Regency Hotel opened its doors to the public, while full of patrons, the two aforementioned walkways came crashing down into the hotel’s lobby. As a result of negligence, 114 people died and 216 others were injured. The collapse resulted in about $50 million in damages, and insurance claims that totaled in the billions.

Built on the location where an old Woolworth’s store once stood, in 2018, construction began on “The Big Easy’s” newest attraction, a Hard Rock Hotel. Work continued on the new project, through into 2019, even after a contractor and a few of the workers had said that they had complained about the unsafe working conditions and unorthodox practices that occurred on site. 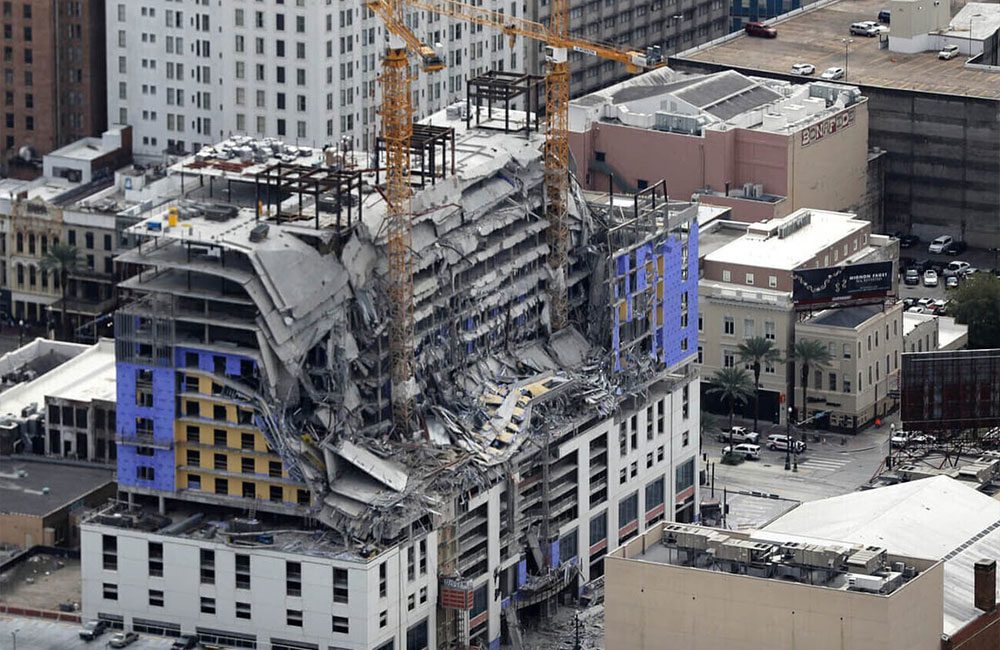 On October 12, 2019, New Orleans’ new Hard Rock Hotel partially collapsed, killing 3 people and injuring dozens of others. The follow-up investigation determined that the structural integrity of the building was compromised as a result of the steel bolt connections not being designed adequately, and the rest of the building was subsequently demolished on the order of the city’s mayor, LaToya Cantrell.

The Lotus Riverside Compound in Shanghai, China, was originally meant to be an 11-building complex with each building being 13-stories high. In order to clear enough space for the large structure, massive amounts of dirt were removed from the ground and relocated to a landfill. 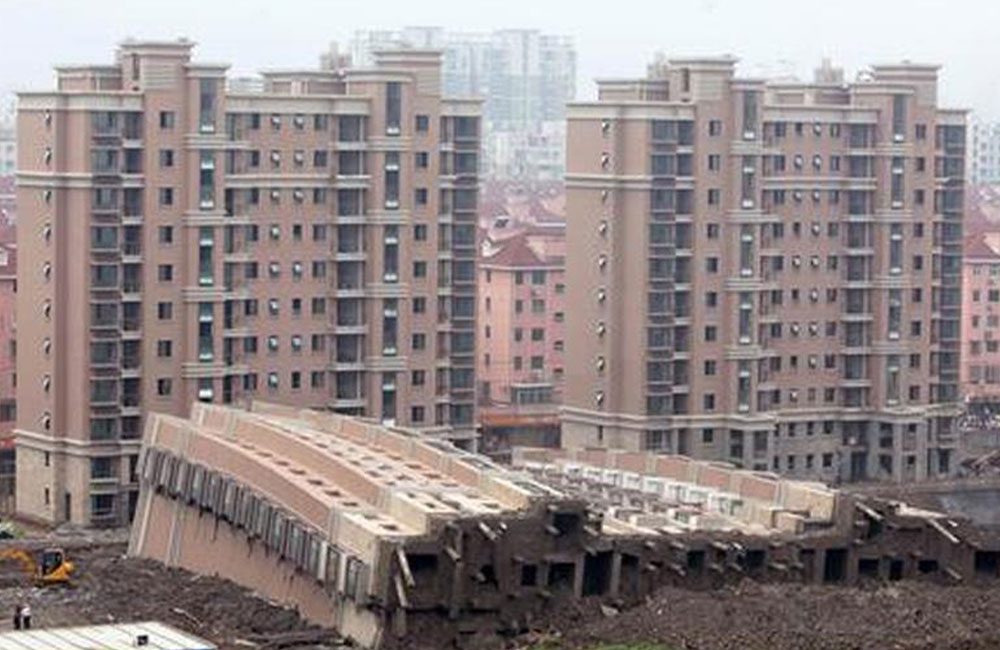 The added weight of the earth in the landfill resulted in the bank of a nearby creek giving way. The water from the creek made its way to the foundation of the Lotus Compound’s Block 7, causing the ground to soften and the building to collapse before the complex had even been completed. Sadly, one of the building’s workers lost his life in the accident.

The structural frame, with which high-rise buildings should be constructed, was non-existent in Ronan Point. In other words, should a lower floor give-way, the higher floors would have no support and would in turn collapse as well – which is exactly what happened only 2 months after the building was inaugurated. 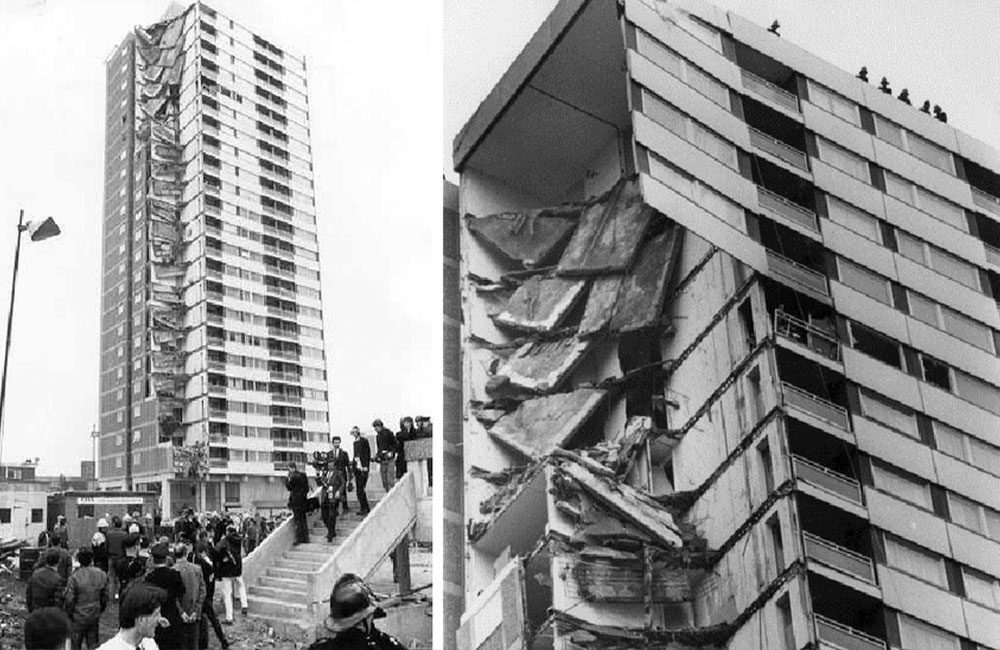 On May 16, 1968, a gas explosion shook the Ronan Point building causing the southeast corner of the 22-floor high-rise to begin its eventual collapse. 17 of the building’s 260 residents were injured, while 4 others were killed immediately as a result of the blast.

It took two years to build Hotel New World, however, as a result of structural defects and shoddy construction work, on March 15th, 1986, it took less than a minute for the six-story building to collapse – not one support beam was left intact.

33 people lost their lives due to the collapse of the Hotel New World, but, had it not been for the work of the rescue crews and tunnel experts who were able to help save the lives of the other 17 people who were in the building at the time of its collapse, it would have been a lot worse.

Construction of the Tacoma Narrows Bridge began in 1938, and by the time it was completed, Washington State was officially home to the 3rd longest suspension bridge in the world. This distinction did not last long, however, as a little over 4 months after its completion, the bridge collapsed into Puget Sound. 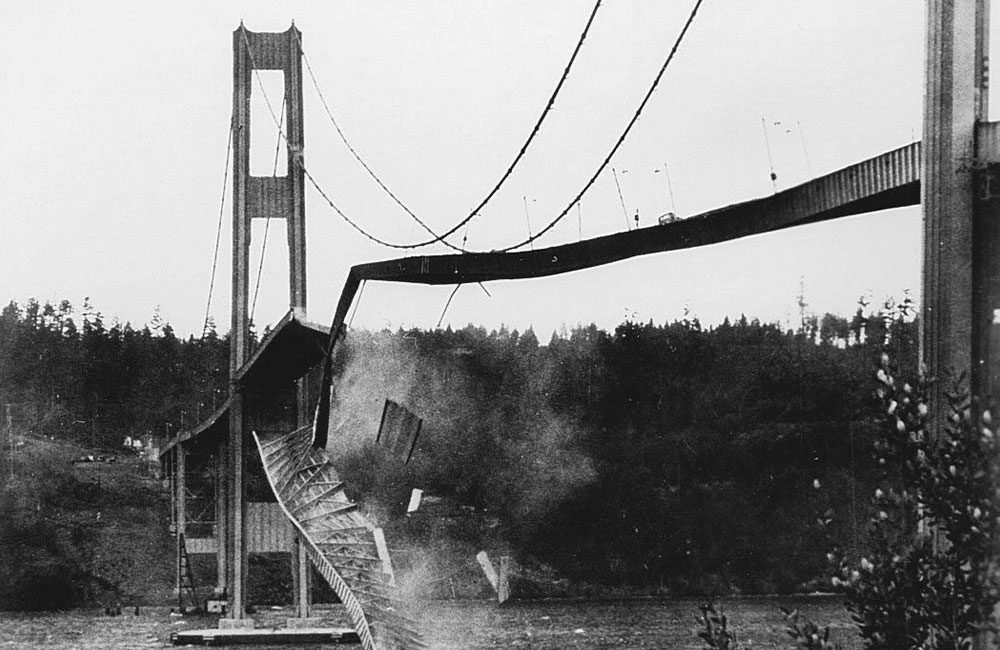 The collapse of the Tacoma Narrows Bridge was the result of heavy winds. Fortunately, there was only one person on the bridge at the time that the collapse began, Leonard Coatsworth, and he was able to crawl close to 500 yards to safety. Sadly, not due to lack of trying, Coatsworth was unable to rescue his dog from the bridge, and Tubby ended up as the disaster’s sole casualty.

Originally, the complex that would later be converted into the Royal Plaza Hotel was just a 3-story structure, however, in 1985, when the transformation into a hotel took place, 3 additional floors were added to the building without the proper construction permissions. It wasn’t until 5 years later, in 1990, that the proper paperwork was sought after, but by then the hotel’s top three floors had already been built. 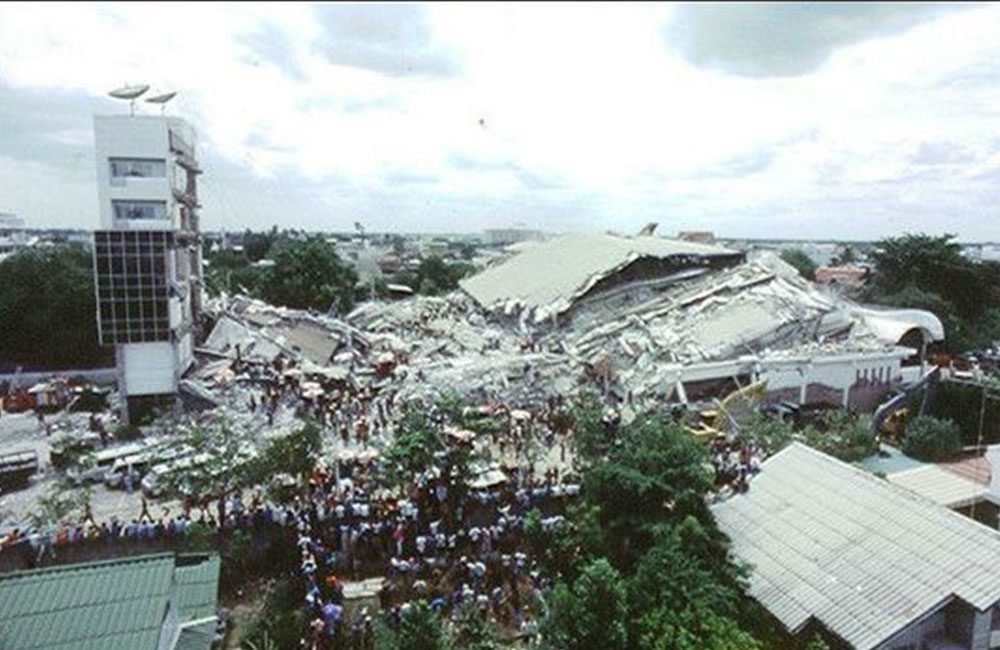 On August 13, 1993, the Royal Plaza Hotel was simultaneously hosting two conferences when the hotel collapsed with nearly 400 people still inside. It’s said that it took less than ten seconds for the 6-story hotel to be reduced to nothing more than rubble – only the front elevator hall was left standing. 137 lives were lost and 227 others were injured in the collapse.

In their designs, architects are able to account for most variables that might arise, however, nothing can prepare someone for the unpredictability of Mother Nature. Thanks to a 2-day blizzard, in 1922, the Knickerbocker Theatre is tied with Florida’s Surfside condominium as America’s third-deadliest failure of structural engineering. 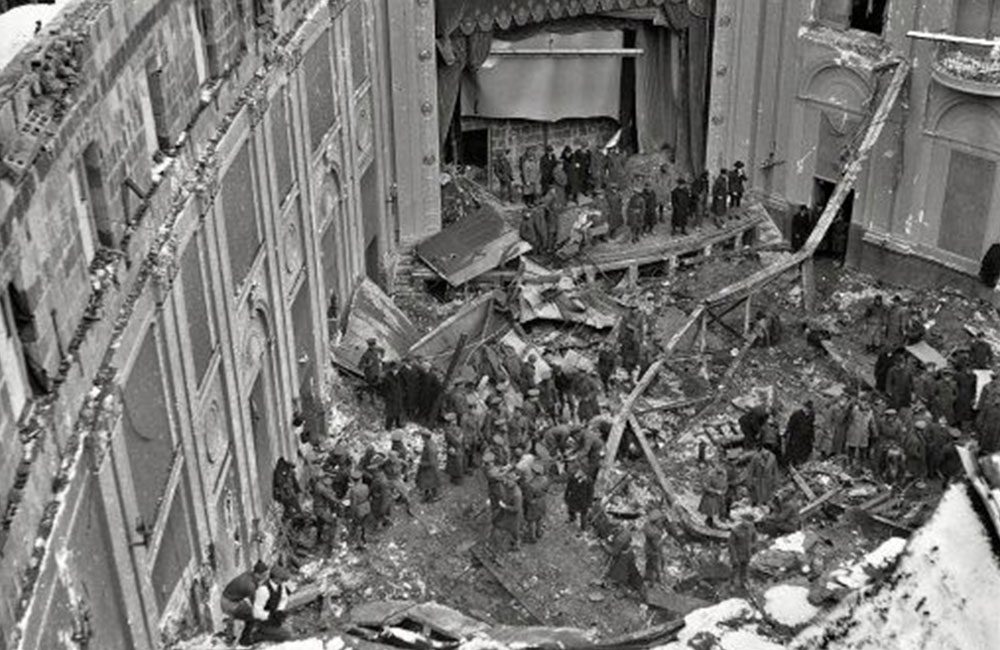 On January 28, 1922, the roof of the Knickerbocker Theatre collapsed under the weight of a tremendous amount of snow. 133 theatre-goers were injured when the ceiling fell in on them, while 98 others, including many political figures, were killed.

In the fall of 1969, construction began on the 2000 Commonwealth Avenue building in Boston. The building was to have 133 apartments and provide housing for close to 400 people. To the dismay of all those involved, the building, as it was meant to be, was never completed. 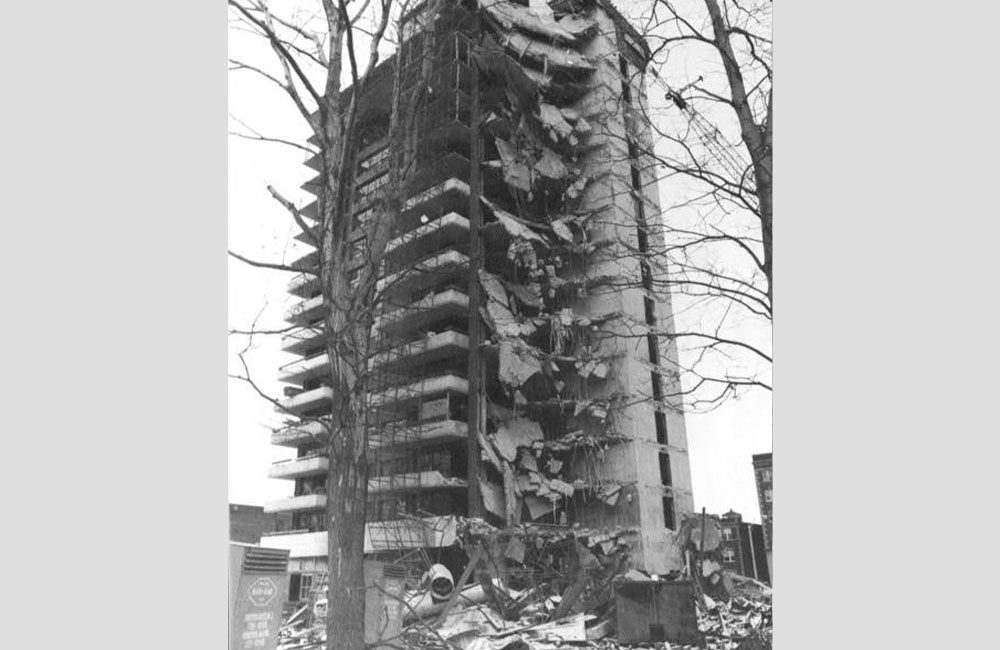 On January 25, 1971, the day before the last beam was to be placed, while pouring the concrete for the top floor of the structure, two-thirds of the building was destroyed. It happened progressively, not all at once, so many of the site’s 100 workers were able to get to safety, but not all – 4 construction workers lost their lives that day.

On October 11, 1993, the residents of the 12-story Highland Towers Block 1 apartments were caught unaware, when heavy rains resulted in the diversion pipes, from the hill behind the towers, to burst. The result was more the 3.5 million cubic feet of mud pushing Block 1’s foundation forward. A few days later, the building collapsed.

An 11-day search and rescue followed the disaster, but only 2 people were found alive in the wreckage of Block 1 and, sadly, 48 lives were lost. After the collapse, Malaysia’s Deputy Prime Minister called for all high-rise buildings to be inspected in order to ensure they were safe to occupy.

The storied beginnings of the building formerly known as the Grand Central Hotel date back to 1870, when the hotel first opened for business. Over the next century, there were many alterations to the building including, allegedly, to the basement bearing wall, which is what investigators believed resulted in the partial collapse of the complex. 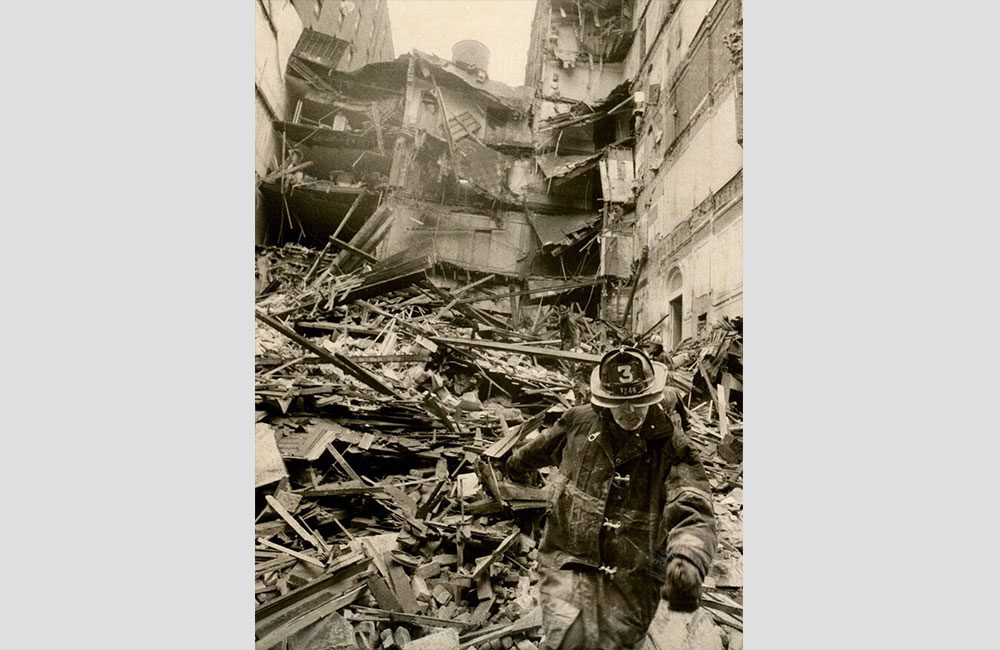 On August 3, 1973, four of the hotel’s residents were killed when part of the building’s facing broke off and fell onto the street next to the complex. What was left of the hotel was eventually torn down, and a 22-story building, that is now being used as lodging for law students, was built in its stead.

On March 27, 1981, the Framework of Cocoa Beach, Florida’s, newest 5-story residential development project, known as The Harbor Cay Condominium, was nearly complete. Workers were in the process of pouring the roof’s concrete when everything came crashing down. The building collapsed as a result of multiple errors, most notably, the thickness of the building’s concrete slabs was one-third of a size too thin. 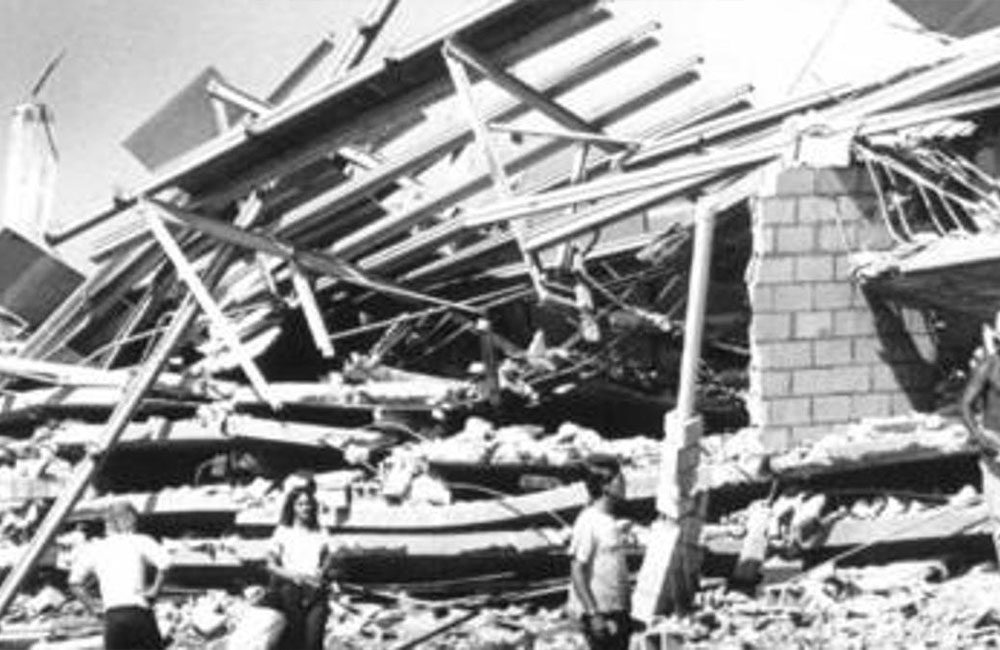 Unlike the Champlain Towers of Surfside, Florida, since the Harbour Cay Condominium was still under construction, when it met its untimely fate, there were no residents inside. 11 construction workers lost their lives in the collapse, and another 27 sustained non-fatal injuries.

Advertisement
Most Innovative Tech Products That Came Out This Year
In the ever-evolving world of global technology what was groundbreaking one day might very well end up being obsolete a short time later. With that in mind, millions of people around the world have not been deterred from their goals of developing the next revolutionary products that just might change the world. From seafood that’s […]
Free Prizes & Collectibles Worth A Lot Of Money Today
For decades, brands have used free giveaways as a method to entice new customers. Kids have mainly been the target, with toys and trinkets in cereal boxes and fast-food meals designed to keep them coming back for more.  Eventually, these items that were originally free have taken on a collectible status, with those who saved […]
Every Time Hollywood Re-Used Expensive Props
Movie making is an expensive business. It’s not unheard of for projects to cost hundreds of millions of dollars to complete thanks to intricate sets, logistics, and props. That being said, not every single prop you see in a movie is made exclusively for that production. Some are borrowed from the vaults.  In fact, some […]
Life Skills Every Adult Should Know to Save Time & Money
Life’s hard, especially the adulting portion of it. Let’s face it, life skills are easier said than done. For example, you know you should “be organized,” but what does that even mean? Should you invest in a file folder? A Rolodex, like it’s the nineties? Looking on Google for the answers to your daily trials […]
Advertisement