If America is known for any one thing, it’s fast food. From Burger King to McDonald’s to Taco Bell, you can’t drive a mile down any US highway without passing several of them. While these may be our most beloved go-to fast food fixes today, they were far from the first.

Back in the 1950s, fast food joints were on the rise, going over like gangbusters. They served hamburgers for 15 cents a pop, plus greasy french fries and hand-spun milkshakes – typically as drive-ins. The industry has changed greatly over the years, but you’ll almost definitely remember some of these classic fast food chains that sadly no longer exist.

Headquartered in Irving, Texas, Showbiz Pizza Place as a brand name was retired, but the restaurant later became known as “Chuck E. Cheese” after a merger, and it is very much still around. Showbiz Pizza place was founded in 1980 by Creative Engineering and Robert Brock. The brand was successful early on, as it managed to capitalize on the newfound popularity of arcade games. 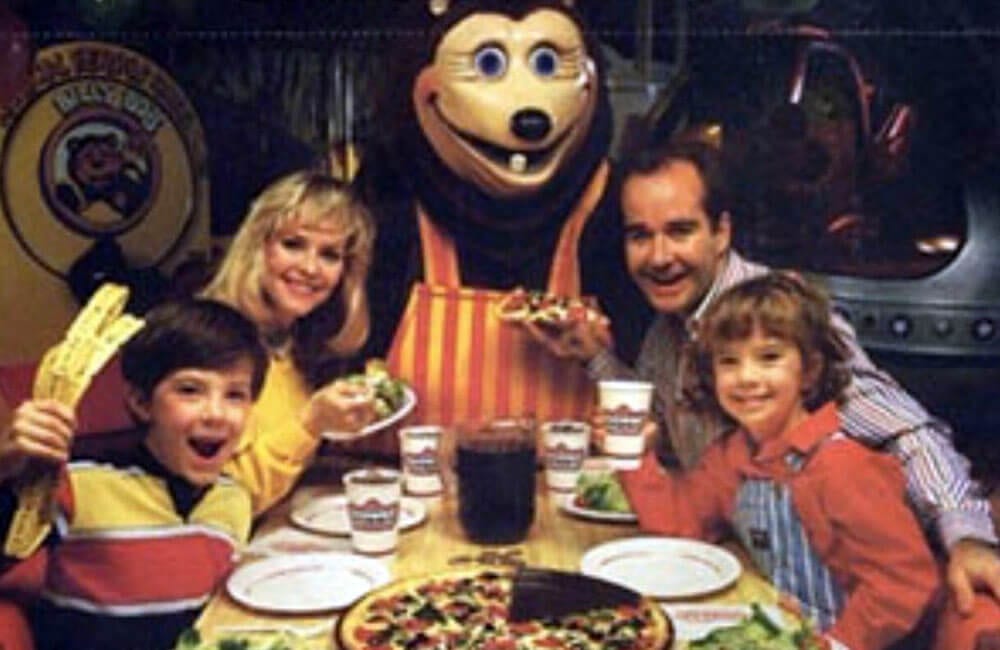 The animatronics at Showbiz separated it from Chuck E. Cheese’s mouse, and Showbiz did well until 1992 when it was not able to survive on its own and merged with Chuck E. Cheese. All locations were rebranded.

The Erenstein brothers never planned on opening a fast food restaurant chain, but in the end, it just made sense. They began their careers as meat suppliers. But when they noticed that one particular restaurant kept having an increase in meat orders, they decided to check it out. That restaurant was, of course, McDonald’s – and served as inspiration for the first Winky’s. 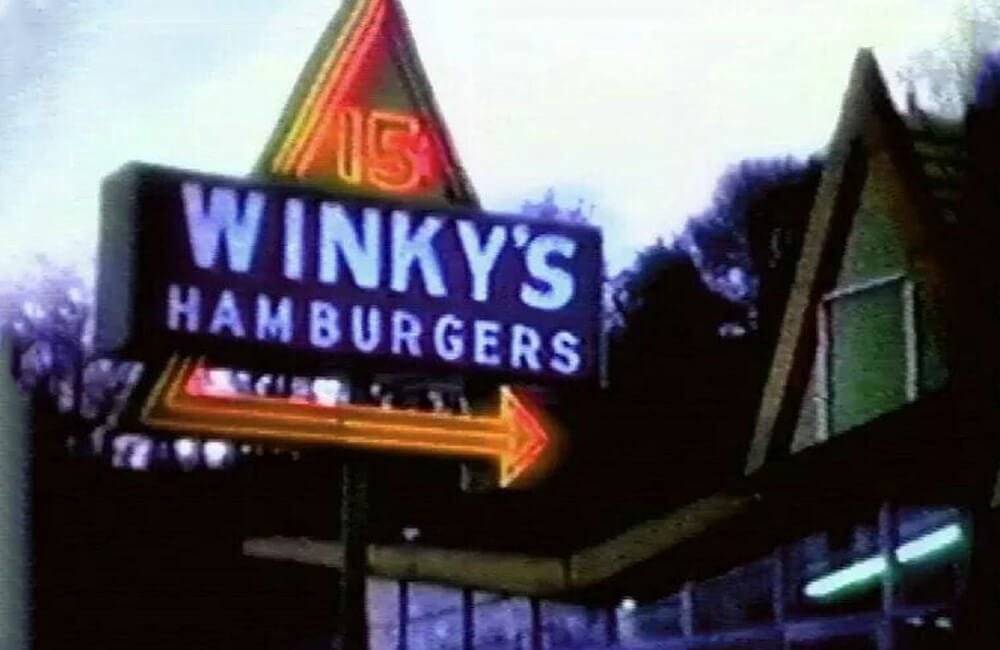 Since the Erenstein brothers were able to supply their own meat at their restaurant, they were destined for success by cutting out a middle man. They opened 42 locations in three states but eventually filed for bankruptcy in the early 1980s. However, the restaurant made a memorable comeback cameo in the iconic David Lynch film Mulholland Dr.

Childs can be credited as being one of the first restaurant chains in the United States. Starting off early in 1889 with a single location in New York City, it soon had locations in 29 cities across the country and even in Canada. This early model paved the way for restaurant giants such as McDonald’s with its food options, sanitation, and service. 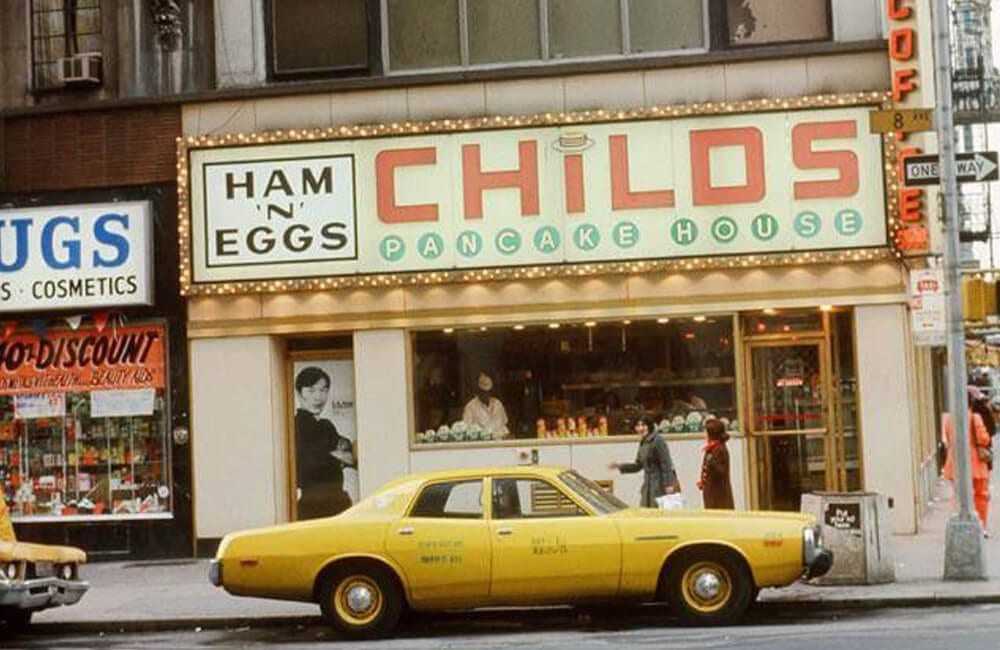 The chain especially thrived in the 1920s and 30s. But over the following two decades, it struggled to keep up. The restaurant tried a variation of services including a hot dog machine, ice cream machine, and even flipping flapjacks. Unfortunately, locations closed in the late 1960s.

Minnie Pearl’s Chicken was named after Minnie Pearl, a country comedian born Sarah Ophelia Cannon. Interestingly, she had exactly nothing to do with the restaurant other than lending it her name. The restaurant opened to compete with Kentucky Fried Chicken, and flourished nationwide during its early years 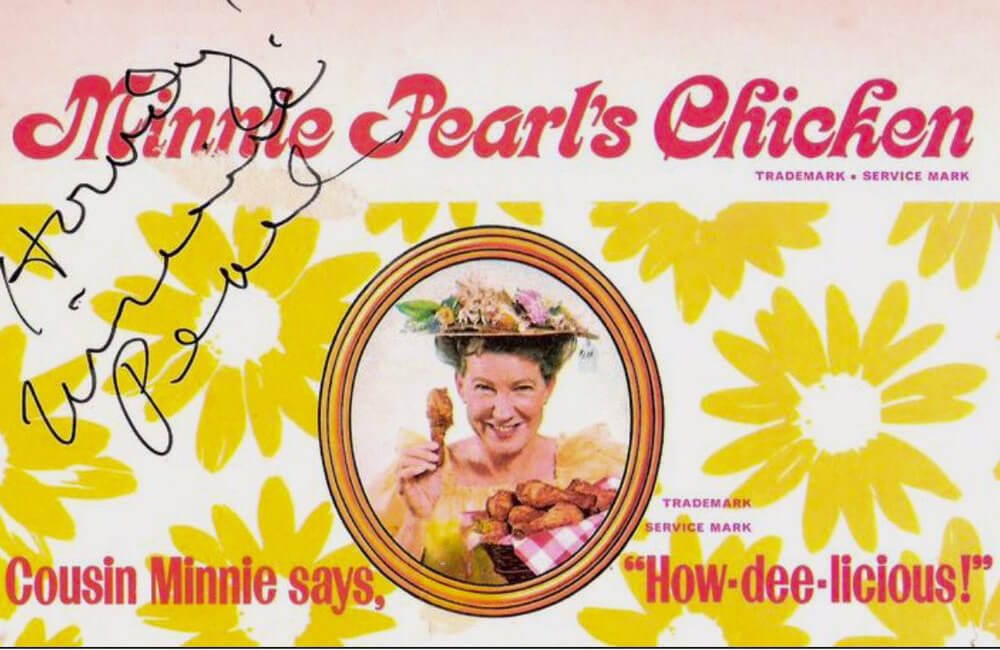 Within a short period of time, over 500 locations had been opened and franchised. However, KFC had a leg up and outshined in the competition. In 1968 the owners were forced to show their earnings and investors were shocked to discover themselves $1.2 million in the hole.

Carrol’s was an American fast food chain that was easily identified from its yellow slug mascot. The mascot later changed to a little blonde boy sporting a Fedora. The company began franchising once Herb Slotnick bought the rights. He saw potential in the hastiness and efficiency of cooking 15-cent hamburgers. 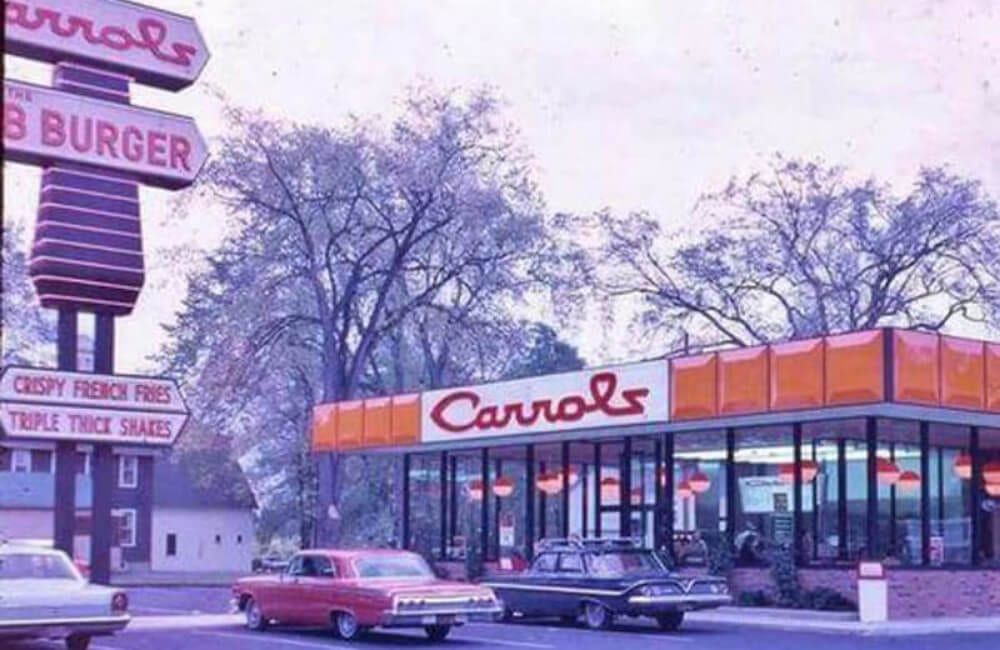 You’ve heard of the drugstore Walgreens, but did you know that they also owned and operated a 24-hour diner-style restaurant in the 70s? Now you do! Wag’s was based on the Denny’s concept and had locations along busy highways. Its menu consisted of breakfast platters and hamburgers. 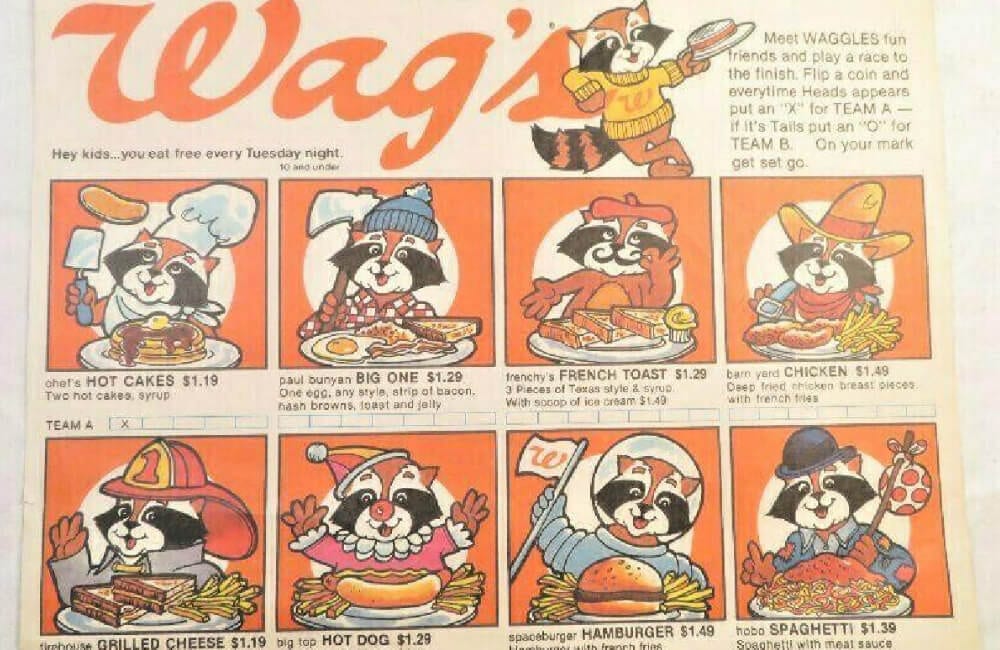 Walgreens decided to sell all of its restaurants, except for a select few located in malls, to Marriott Corporation in 1988. Ownership changed hands a few times before the chain shut down altogether. Some of the locations were turned into IHOPs, though.

Royal Castle’s first location was in Miami, Florida. It primarily served hamburgers and rootbeer, not dissimilar from the similarly-named White Castle chain. Along with lunch and dinner, Royal Castle also offered a breakfast menu which included its beloved freshly squeezed orange juice. 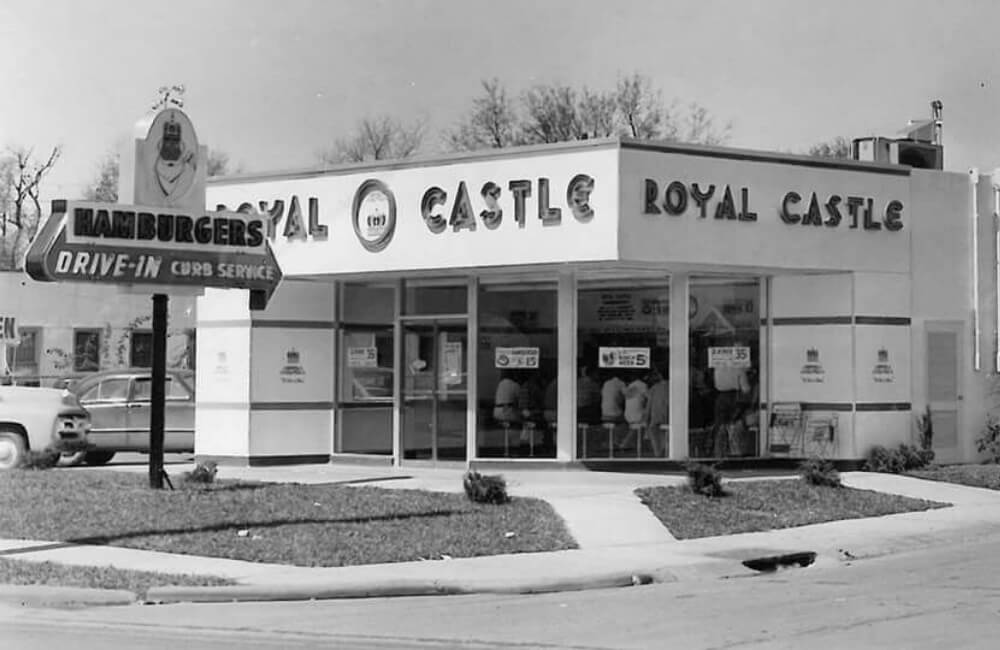 While Royal Castle had locations in Florida, Louisiana, Georgia, and Ohio, its reign didn’t last long. They were bought by Performance Systems in 1969, followed by steady yearly losses as it failed to compete with McDonald’s.

Bob’s Big Boy was a restaurant chain that was founded in Southern California in 1926. The chain was originally called “Bob’s Pantry.” Now, the chain is defunct, but the parent company, Bob’s Big Boy Restaurant Group, is still around. Only five Big Boy restaurants exist today.

The company had some pretty serious publicity problems. In Los Angeles, the West LA La Cienega location was the site of one of the worst crimes of 1980, when robbers forced eleven people into the freezer, killing three and stealing $1,700. Ten years later, there would be another murder at the Playa del Rey location.

Dee’s Drive-In was a fast-food drive-in burger chain that was based in Salt Lake City, Utah. Dee Frederick Anderson founded the chain after being inspired by his own starting job, selling hamburgers at the University of Utah. Anderson opened his first restaurant in 1932.

The chain would later grow to 53 restaurants, bringing in $20 million a year. In the early 2000s, the chain ran into some financial troubles, in part caused by a slew of sexual harassment lawsuits that cost the company millions. The chain shut down, and some of the restaurants were converted into Walgreens Pharmacies.

Isaly’s was a chain of family-owned restaurants that was founded by Will Isaly, who came from a family of Swiss immigrants. The chain was founded in the early twentieth century, and it lasted until the seventies. It was headquartered in Pittsburgh, PA, but it was founded in Mansfield, Ohio, where the Isaly family settled after immigrating.

Isaly’s was famous for its chipped chopped ham. It also helped create the famous ice cream confection known as the “Klondike Bar.” The company’s success was largely due to its loose company structure, which let it expand rapidly with little corporate overhead costs.

Wetson’s was a fast-food chain that people living in New York in the fifties, sixties, and seventies will likely know. The hamburger chain had seventy restaurants in the greater NY metropolitan area, and it was known for its “Big W” signature burger, as well as its fifteen-cent burgers and ten-cent fries. 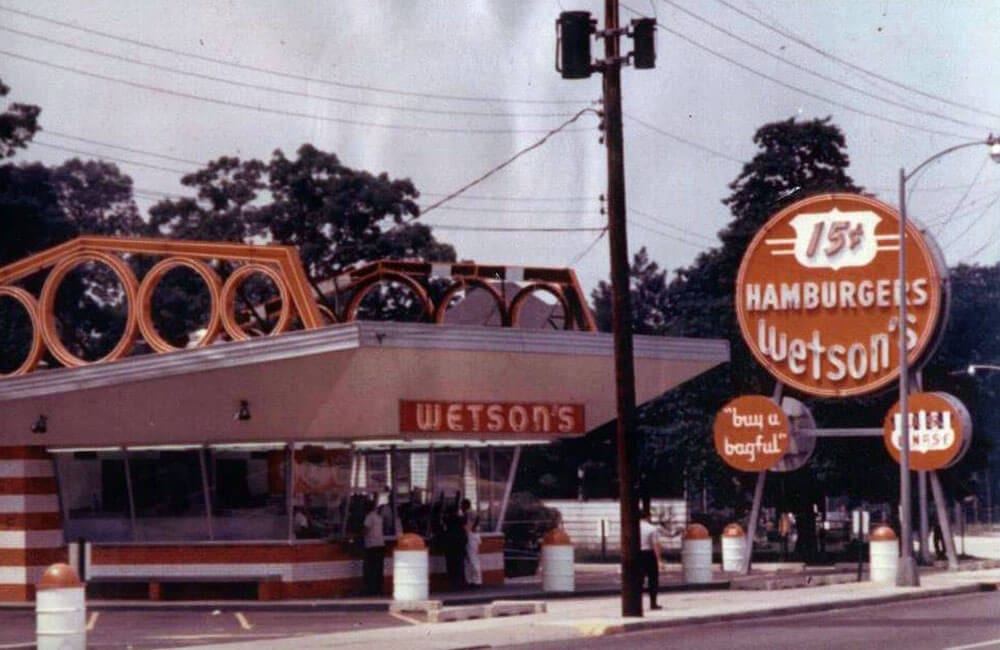 Wetson’s was also known for its distinctive slogans, “Buy a Bagful” and “Look for the Orange Circles,” the latter of which was very similar to McDonald’s. Wetson’s also had a clown mascot. The chain was unable to compete against McDonald’s and Burger King, which is why it went under. 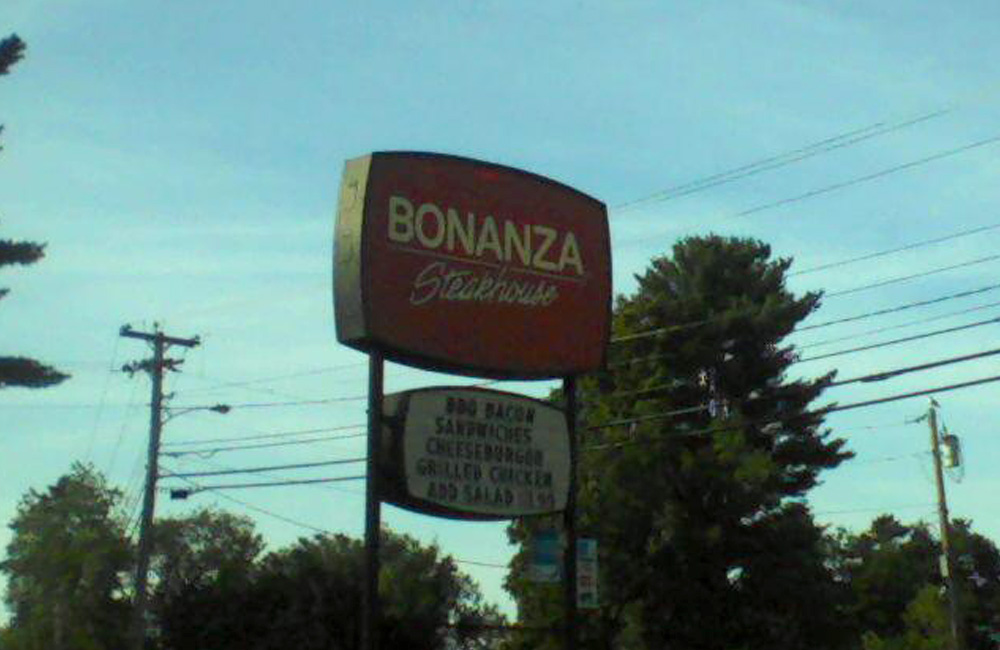 Bonanza was purchased by entrepreneur Charles Wyly, who bought the small chain when it had just a few dozen locations. He worked his magic, and the chain grew to a peak of 600 locations in 1989 when he sold it to Metromedia. There are only seventy-five Bonanza Steakhouses left in the U.S. as of 2019.

Doggie Diner was a fast-food chain that was founded in 1948 and closed down over four decades later in 1986. It was based in California, mainly in San Francisco and Oakland. The chain opened its first diner on San Pablo Avenue in Oakland. At its peak, the chain had thirty locations. The chain served hot dogs and hamburgers, and it had a giant dog as its mascot. 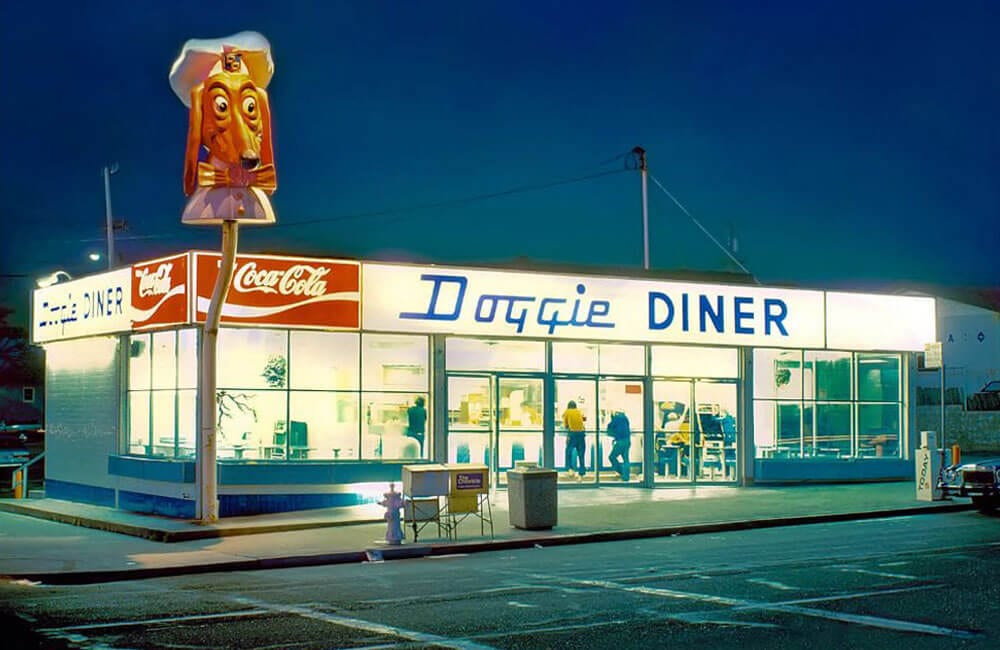 The chain went out of business after it wasn’t able to compete with Burger King, McDonald’s, and Wendy’s. Al Ross, the Doggie Diner founder, died in 2010 at the age of ninety-three.

Do you remember the childhood excitement of getting a toy in your meal when your family ordered some fast food? You may not remember this, but the very first restaurant to include kids’ toys in their meals was the one and only Burger Chef. In fact, the chain even sued (unsuccessfully) McDonald’s once they started including toys in Happy Meals. 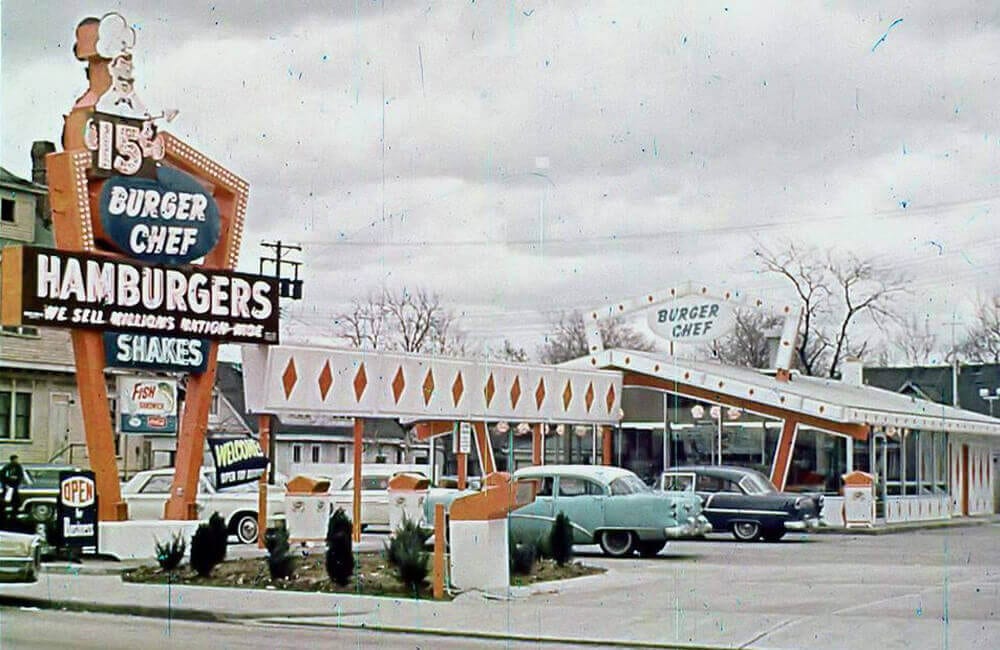 The American food chain started out in Indianapolis, Indiana serving hamburgers, fries and milkshakes. The peak of their life was during the 1970s. However, when the chain was sold in 1982, many stores started to close because they refused to change their brand.