For decades, brands have used free giveaways as a method to entice new customers. Kids have mainly been the target, with toys and trinkets in cereal boxes and fast-food meals designed to keep them coming back for more.

Eventually, these items that were originally free have taken on a collectible status, with those who saved the one-worthless knick-knacks seeing their value soar. Some of the toys might be so valuable now that it’s time to dig out the old toy boxes and see if you have any vintage Kellogg’s or Postmates treasures!

While Hot Wheels have become a staple of McDonald’s Happy Meals, the later iterations of the toys are not as valuable as the original 1983 version. Still, versions from 1993-1998 can fetch around $20 per toy car, which is nothing to sneeze at considering the cars are free. 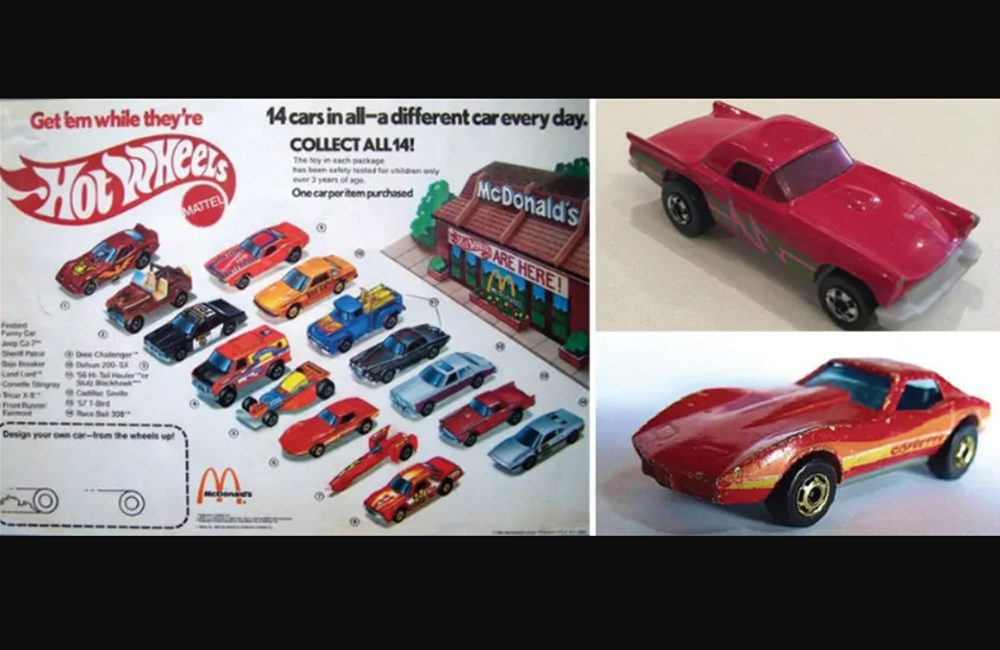 The 1983 version is the most valuable and brings home the most bacon if you happen to have all 14 versions of the toy. As with any collector’s item, a full collection makes the lot worth more than the sum of its parts. From a Jeep to a Corvette, the 1983 collection has it all.

An unusual freebie with a rather niche following is the Blakely glassware that started as a way for one small Arizona gas station chain to show gratitude to its customers. The sets of glass tumblers and dinnerware and serving trays have taken on a cult following of their own, mainly for fans of kitschy Southwestern Americana. 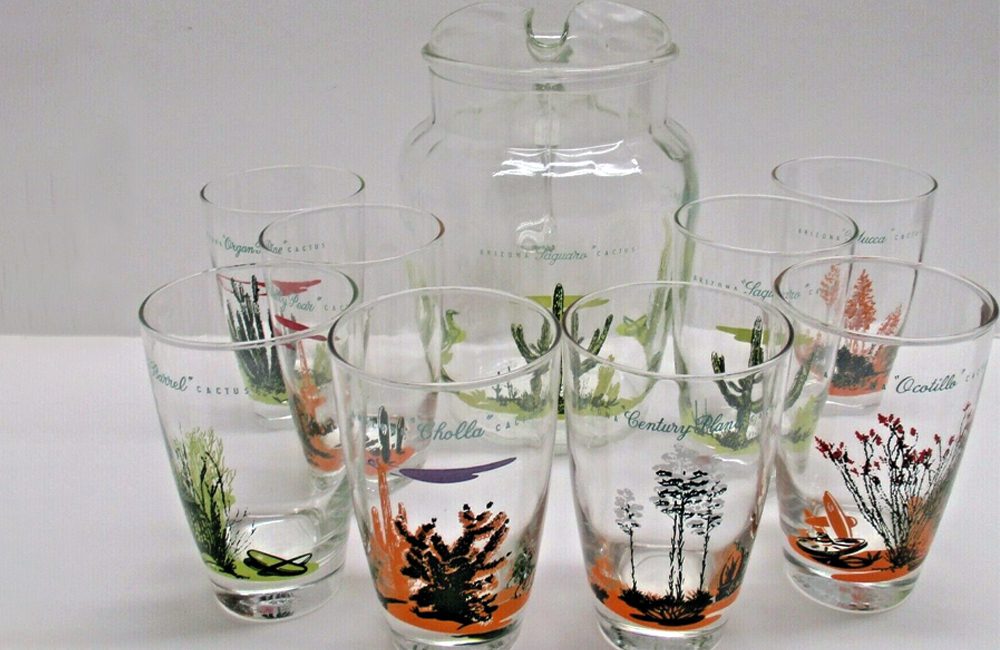 Each tumbler in a set depicts a different aspect of the Southwestern landscape, from big cacti to desert flowers. Some are frosted glass, while others are clear.  The dinner plates are similarly designed, as are the ultra-rare placemats and glass pitchers.

In 1976, Kellogg’s released a series of four comics detailing the adventures of Toucan Sam, the mascot from their popular Froot Loops cereal. Each of these free comics is now worth $30, which is certainly nothing to scoff at. 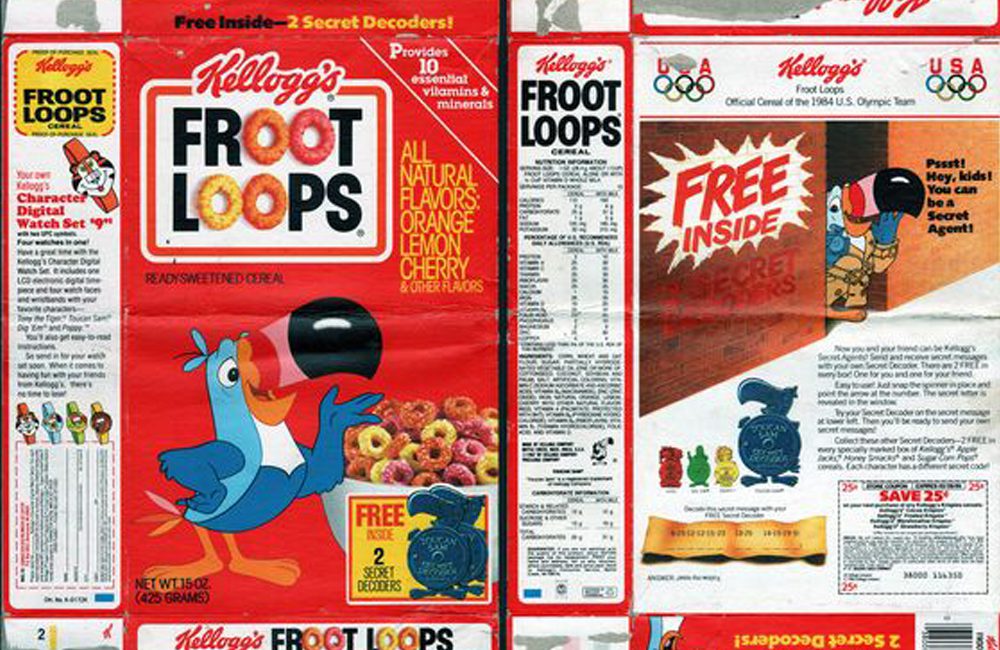 In comparison, the one comic released in 1994 is only worth $6 today, though that value will probably rise as years go by. Recently, the Toucan Sam mascot saw a complete redesign, which will no doubt make the old comics rise in value as they showcase the old version of the bird.

In 2000, fast-food giant Burger King came out with a line of miniature pewter action figures from the popular cartoon Dragon Ball Z. The Japanese series aired for nine seasons, starting in 1989, and became extremely popular with American audiences. 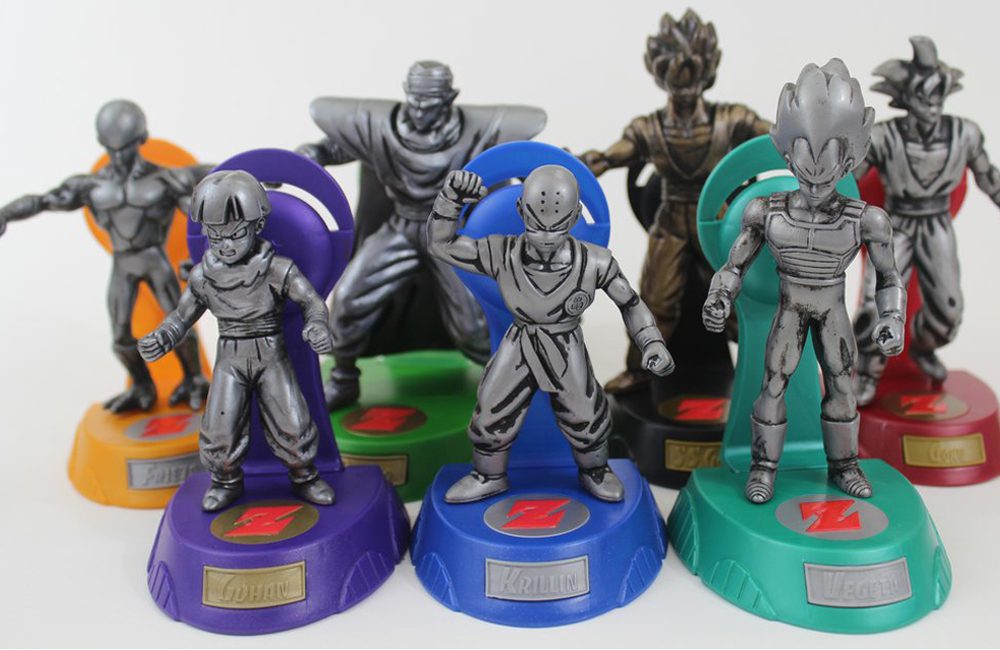 While Burger King made several iterations of the free toys with the purchase of a kids’ meal, the ones that fetch the biggest bucks are the silver-looking ones and not the colorful plastic. Once again, the whole collection also fetches more than any individual piece.

Created by Tiger Electronics in 1998, the Furby took off like a storm, becoming one of the biggest toy fads of all time. Though deemed creepy by some, the combination of owl-like eyes, kitten-like ears, and furry body along with cutesy human speech made them a favorite of children everywhere. 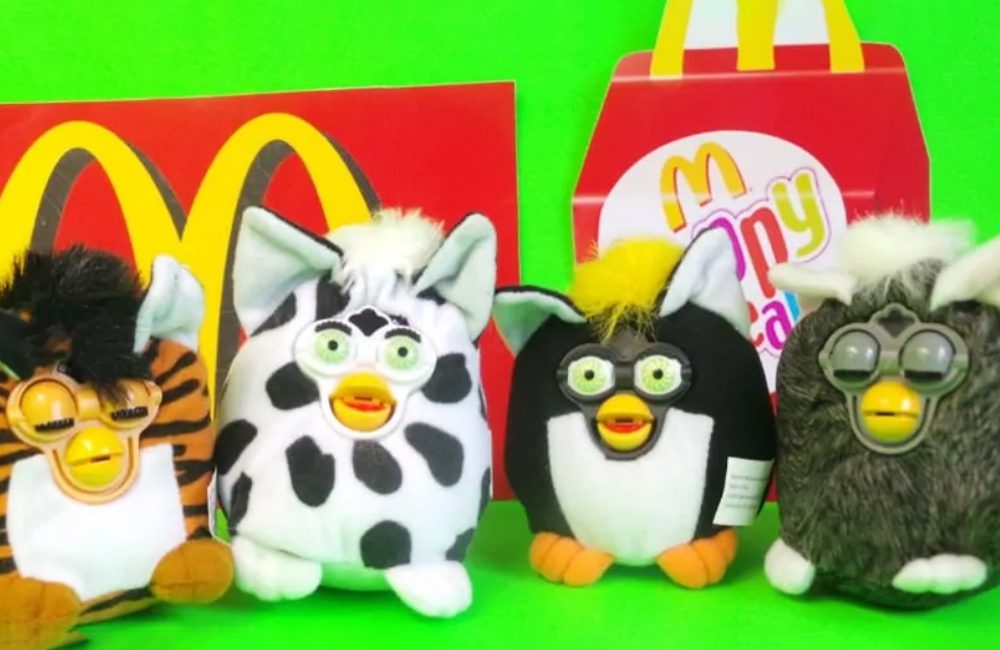 Though McDonald’s has more than one Furby collab, the original 1998 Happy Meal toy is the one that is worth the most. Ones that are still in their plastic packaging are worth the most money, fetching up to $30 for what was originally free.

Few people in America are unfamiliar with the billion-dollar franchise that is Super Mario Bros. In honor of the third game in the Mario universe, Nintendo partnered with McDonald’s to release a collection of toys to promote the new game in every Happy Meal. 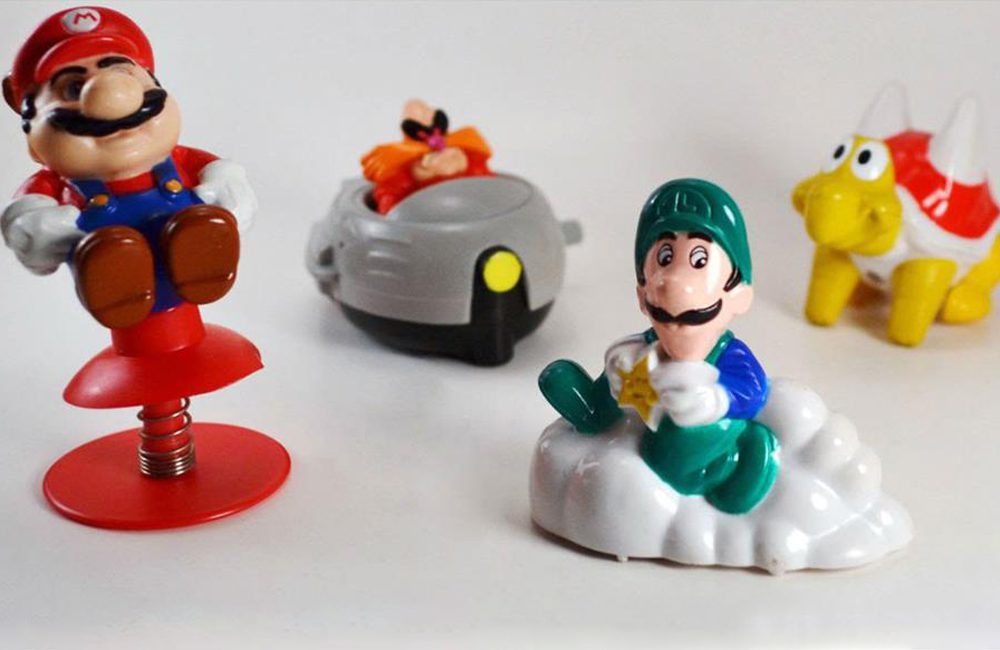 The release included five now-familiar figurines–two of Mario, one of brother Luigi, one of a Little Goomba, and one of a Koopa Paratroopa. The game itself was groundbreaking in its introduction of a map, allowing players to toggle between levels.

As the name suggests, Alpha-Bits are a Cheerios-like cereal that comes in the shape of the letters of the alphabet. Introduced way back in 1957, the cereal had a tremendously long run, finally getting discontinued in May of 2021. 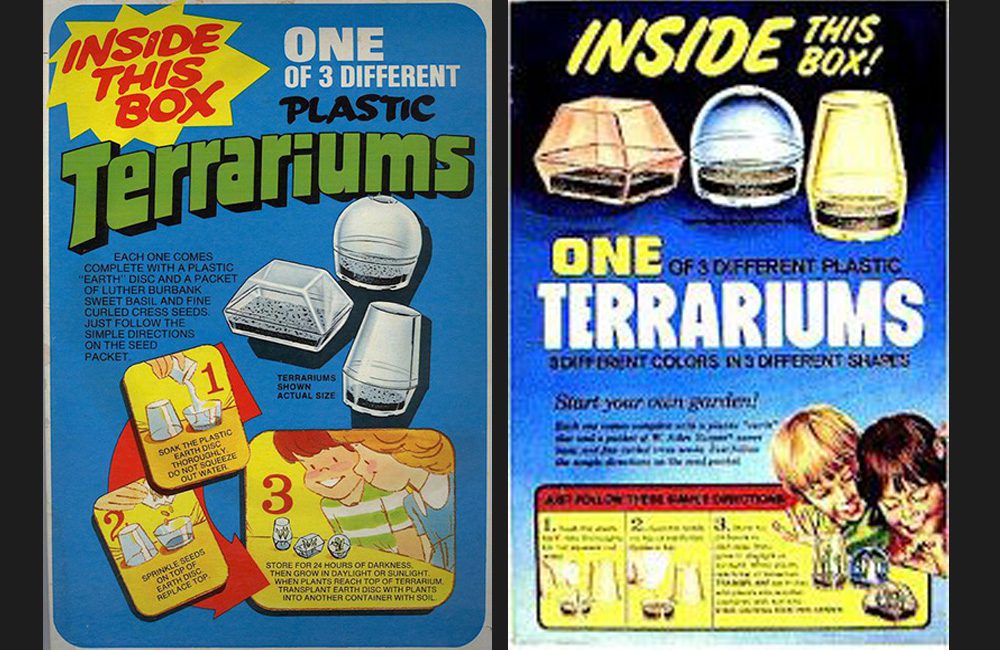 An exciting variation on the typical free cereal box giveaway, Post’s Alpha-Bits came out with a real terrarium including everything you need to grow your own plants indoors. Coming in three shapes and colors of the plastic enclosure, the terrariums included seed packets so children could grow basil or cress all on their own.

Now known as Honey Smacks, perhaps to distance the brand from the negative connotation of sugary cereal, Sugar Smacks was first introduced in 1953. Though the branding might distract from the sugar content, the cereal still has some of the highest sugar content on the market. 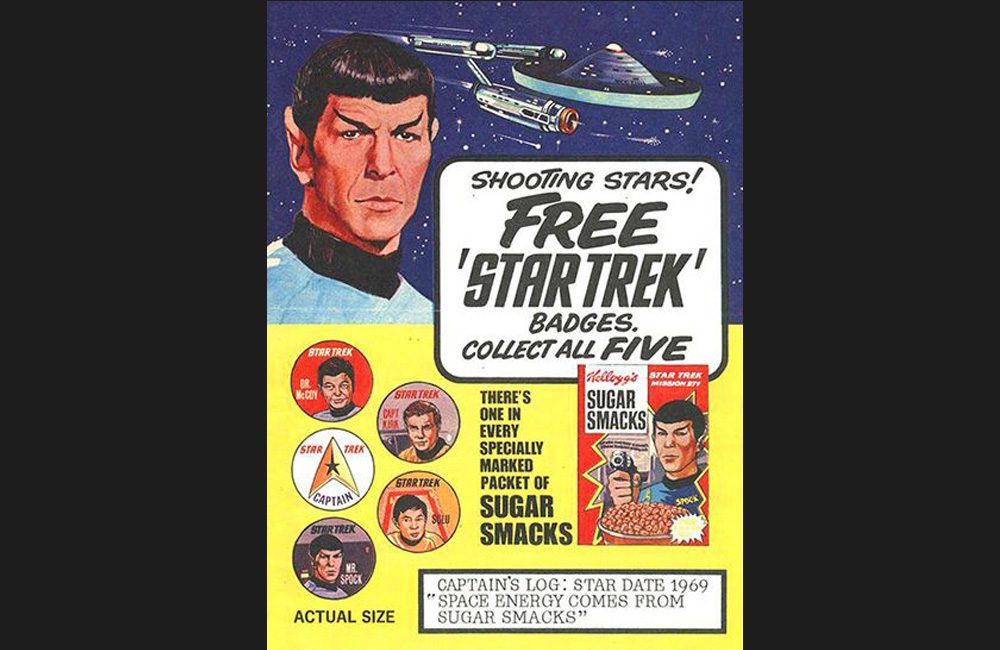 Enticing all kids, not just ones with a sweet tooth, Sugar Smacks came out with a Star Trek-inspired freebie in 1969. The cereal came with one of five badges from the popular sci-fi series, with characters like Spock, Capt. Kirk, Dr. McCoy, and Sulu on them.

A popular Toy Story character that became an extremely popular toy, Mr. Potato Head, is a part of one of the most valuable Happy Meal sets to ever be produced. The 1999 set, which was a part of a promotion of the second movie in the immensely successful franchise, includes all of the iconic characters. 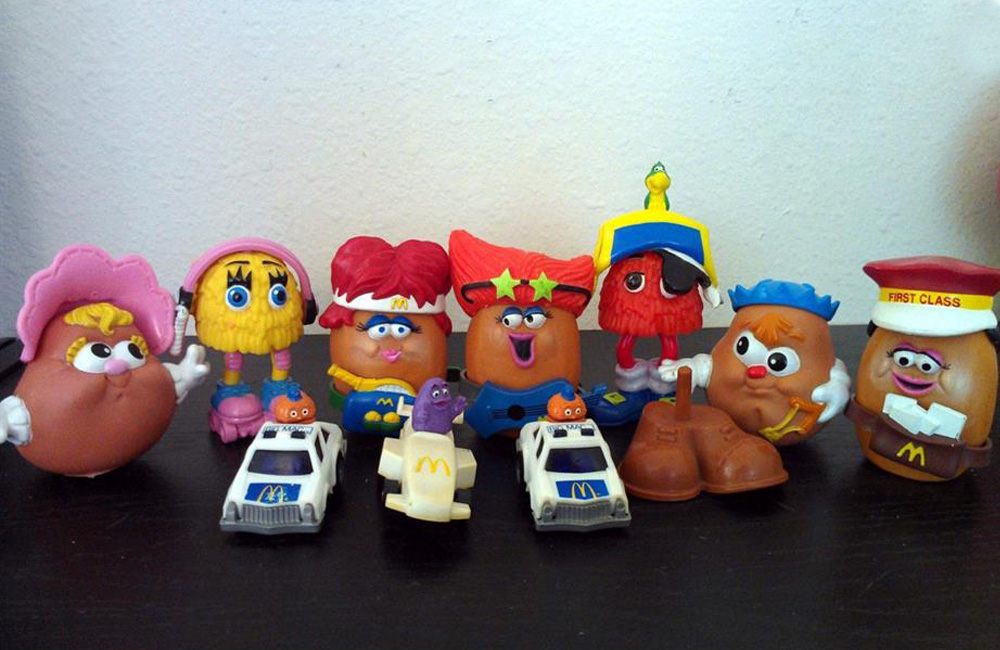 If you’re lucky enough, or perhaps addicted to McDonald’s Happy Meals, and have all of the characters (Woody, Slinky Dog, Mr. & Mrs. Potato Head, Buzz Lightyear, Barrel of Monkeys, Little Bo Peep, and more), then you are looking at $140 extra in your bank account.

Super Sugar Crisp, an ultra-sweet cereal by Post, included a Jackson 5 promotion on the back of their cereal box in 1972. The promotion was a record right on the back of the box, that a kid could cut out and actually listen to. There were three different records, so kids could collect them all. 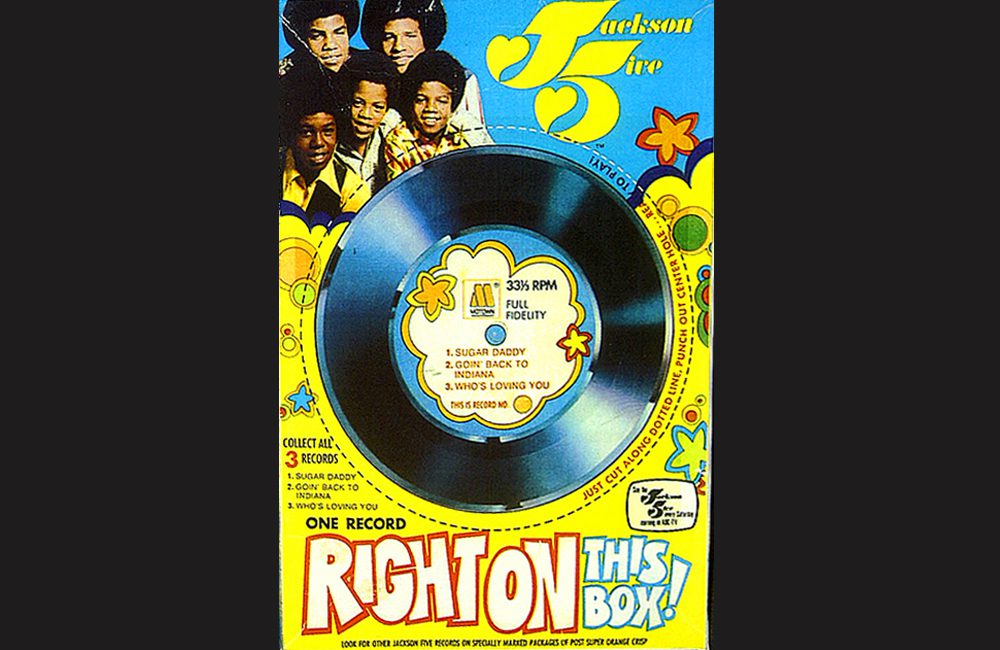 If you happened to keep one of these records, you’re looking at a cool $57, as is the price listed on Etsy and other vintage collectible resellers. The cardboard was fully playable, each 33 ⅓ RPM disc with three songs on it.

Rarely are free giveaways as utilitarian as this set of Teenage Mutant Ninja Turtle bowls. And if you happen to have all four–Leonardo, Michelangelo, Rafael, and Donatello–then you could be looking at a generous stack of cash. 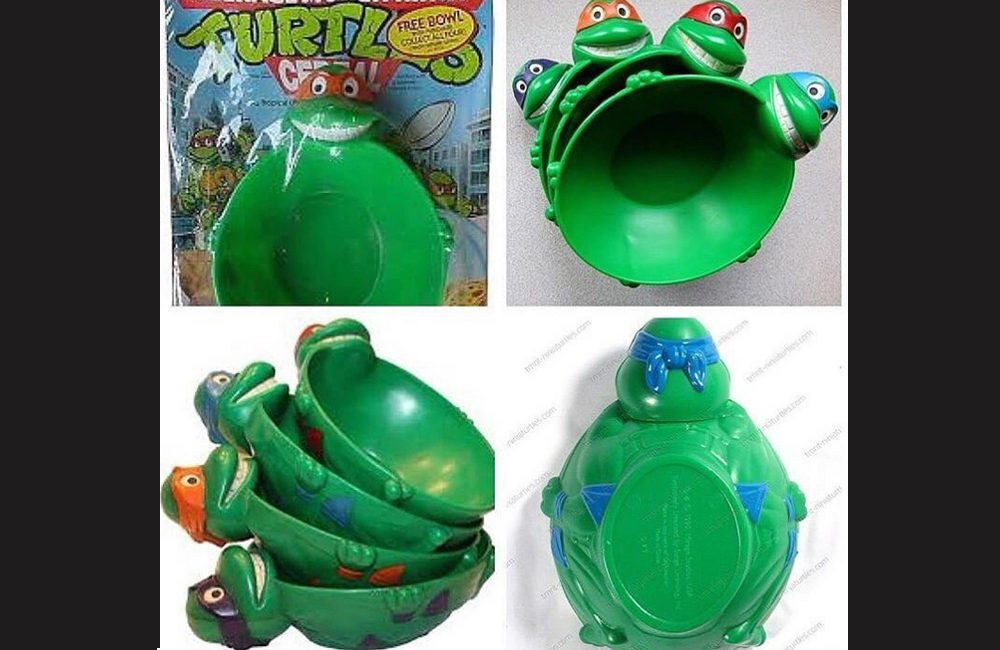 The bright green plastic bowls feature the turtles’ heads, arms, and legs, in a cute cartoonish style, and are the perfect size for a serving of cereal. They came as a mail-in promotion from consumers of the TMNT cereal, made by Ralston.

While Kinder Surprise Eggs still exist today, the ones that are valuable today are collectors’ items from years past. Ferrero first rolled out the now-popular chocolate candies in 1974, and has sold over 30 billion since. While they have been banned off and on for choking risks, they still remain a fixture of the candy market. 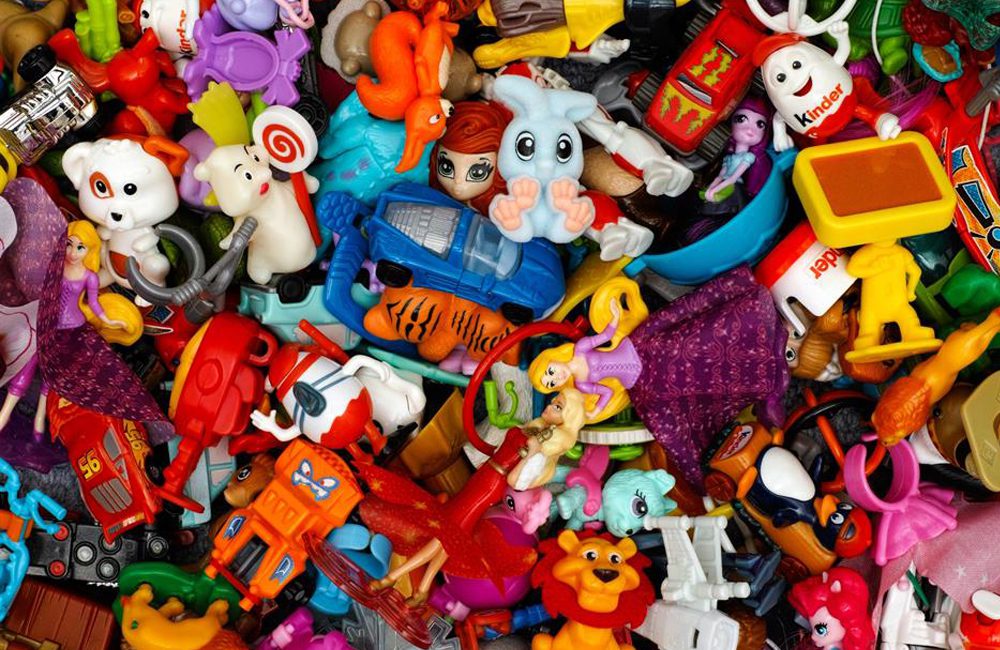 One of the more valuable editions is the rare 1976 circus edition, while plenty of other limited editions and toys with errors are similarly valuable. In addition, having complete sets or multiple of the same toy is also likely to net you big bucks.

In the height of the glow-in-the-dark toy craze of the mid-seventies, Super Sugar Crisp gave out a free glow-in-the-dark pen in every box of their self-proclaimed sugary cereal. According to the box’s instructions, if you held the pen near a light source for a minute and then turned the lights off, it would glow. 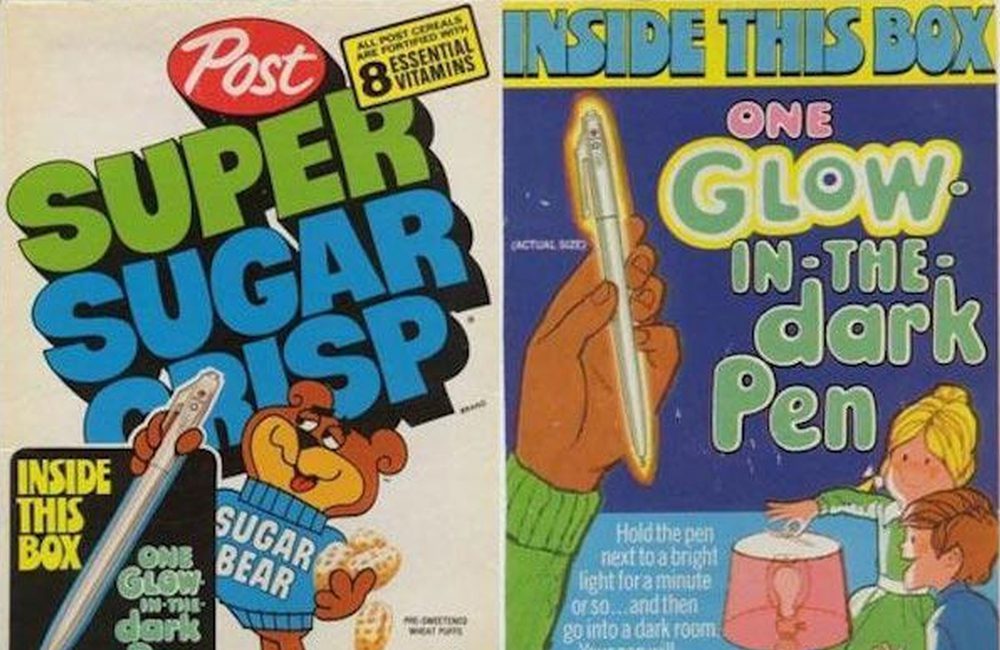 Nowadays, the pens are so hard to come by that it’s difficult to put a price point on them, though rest assured if you held on to one of the pens, and if it still works, then it’s worth more than a pretty penny. On the box is a picture of the pen, claiming that it’s the “actual size”.

Another valuable Sugar Smacks giveaway is the 1966 Thunderbird toy. The plastic action figures and models came in several shapes and bright primary colors. In the midst of the Space Race, these toys captured the public imagination, especially that of children. 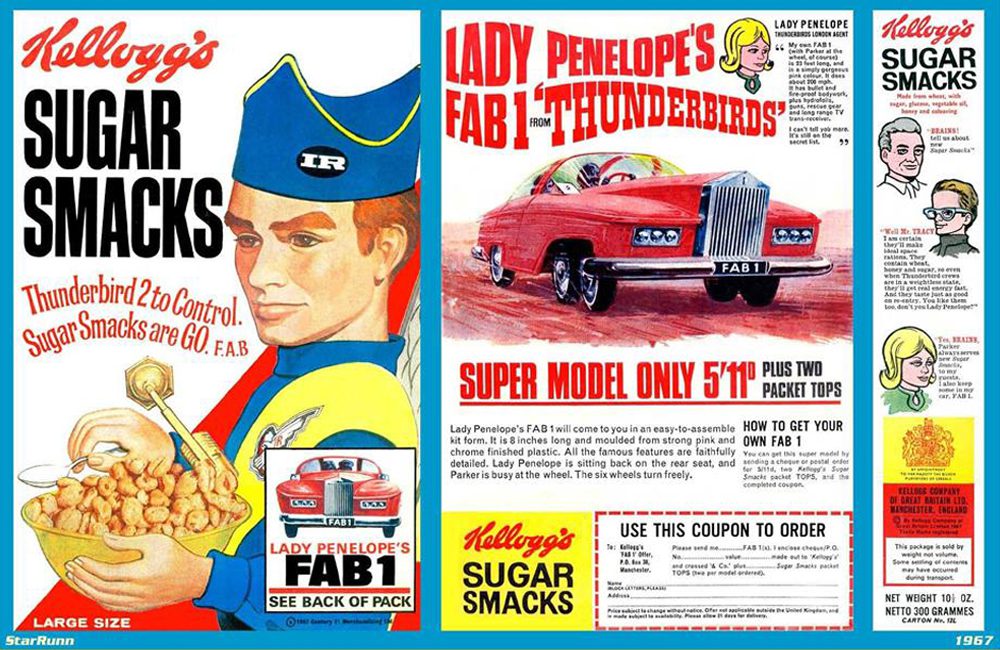 Though there are four spaceship shapes, and a collection of all four is probably worth a heck of a lot more, each individual Thunderbird still goes for around $30 on sites like eBay. While they were mass-produced back in the day, and probably thrown out as junk, if you managed to keep these plastic trinkets you could be looking at over $100.