How do we put a price on memorializing people and events of our past? Whether it’s a statue, a structure, a historic residence, or a massive sculpture, all our monuments might seem priceless, but they do cost money to make. The worth of these monuments depends on many variables, beyond even the raw materials and labor costs.

Do you know the stories behind many American monuments? If you do, you’ll enjoy learning about what went into making them the landmarks and tourist attractions that they are today. Not only do they help us remember the past, but they teach us lessons that can be brought into the future, which some would say renders them priceless. 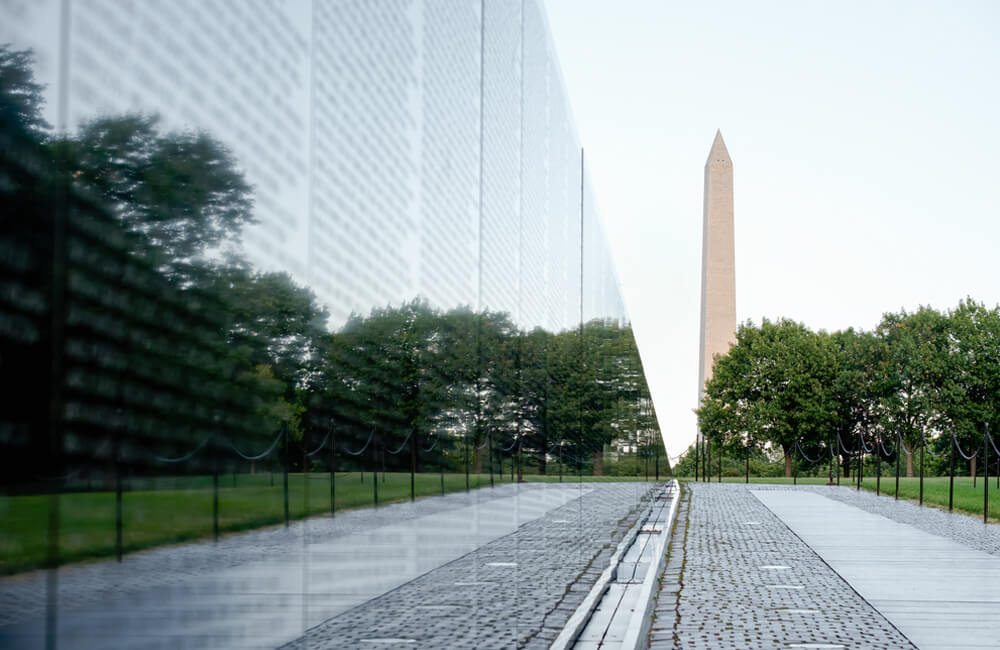 The Vietnam Veterans Memorial is made entirely of Black Granite from India that was chosen for its reflective quality. Collaborators on the project came from all over the country. The stones were cut and fabricated in Vermont, the typesetting was done in Atlanta, GA, and the etching itself was done in Memphis, Tennessee.

Perhaps the single most iconic American landmark, the Washington Monument stands proudly in the center of the National Mall, just due East of the reflecting pool. Before George Washington even died, there were already talks of building a monument for him. The Revolutionary War Hero and first President of the United States of America was honored with this memorial starting in 1848. 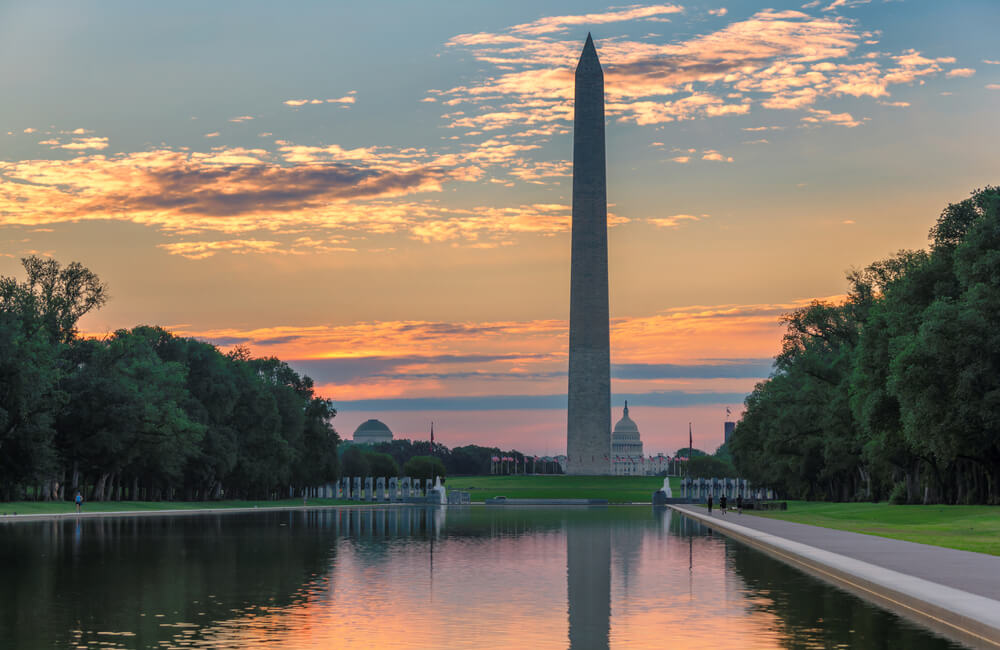 Construction of the memorial was halted for 23 years due to lack of funds and political disagreements, but on October 9th, 1888 the monument was officially dedicated to George Washington and opened to the public. Many do not know that the design for the monument was actually inspired by ancient Egyptian structures.

Although a statue of Abraham Lincoln was built just three years after his assassination, it wouldn’t be for 40 more years that the design and location for the official Lincoln Memorial would be agreed upon by congress. Unlike the Egyptian inspiration for the Washington Monument, the Lincoln Memorial is designed in the fashion of Ancient Greece. 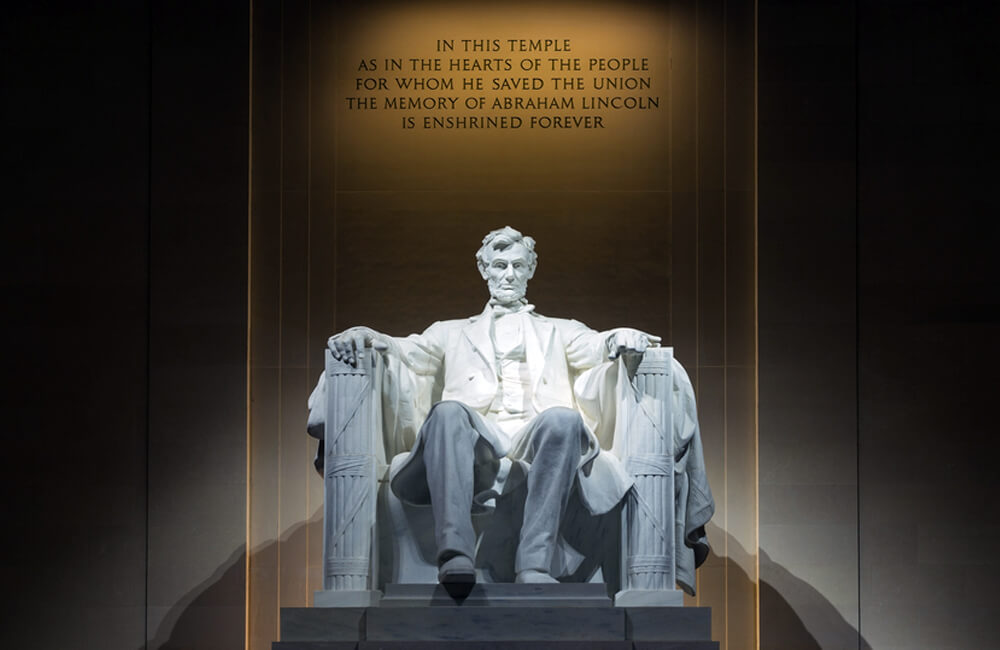 Abraham Lincoln was honored mainly at the time for winning the Civil War, keeping the union together, but the monument itself continues to be one of the most significant symbolic landmarks for the Civil Rights Movement, as it was where the March on Washington brought 250,000 people to heard Martin Luther King Jr.’s “I Have a Dream” speech.

The Korean War only lasted three years, but it was one of the deadliest wars in modern history. That said, the decision to build the Korean War Veterans Memorial in Washington DC did not come until 1986, and took until 1992 to begin construction. The memorial features life-size sculptures of soldiers by renowned sculptor Frank Gaylord. 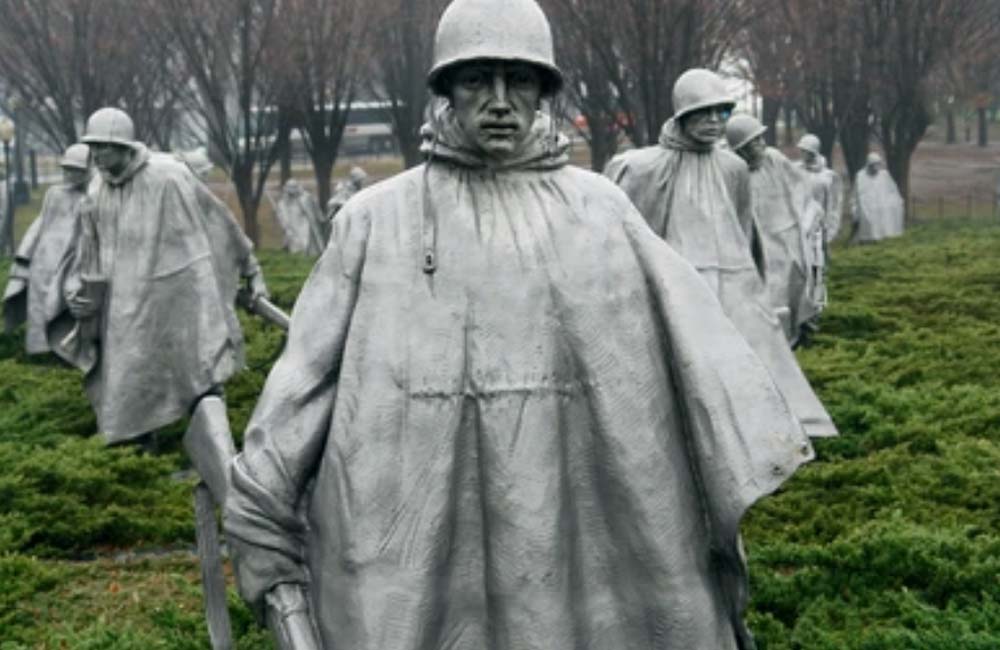 The memorial is surrounded by a quaint grove of lush linden trees. Amongst the grounds is the Pool of Remembrance, a circular pool made of black granite, with inscriptions along the edge of it. The main attraction of this memorial is the Mural Wall, made of over 100 tons of “Academy Back” granite.

The Martin Luther King Jr. Memorial in Washington, DC is simple yet profound. Inspired by a lesser-known line from King’s most famous speech–  “ “Out of the mountain of despair, a stone of hope,” the memorial’s main feature is a 30-foot tall relief engraving of Dr. King in a giant stone of granite. 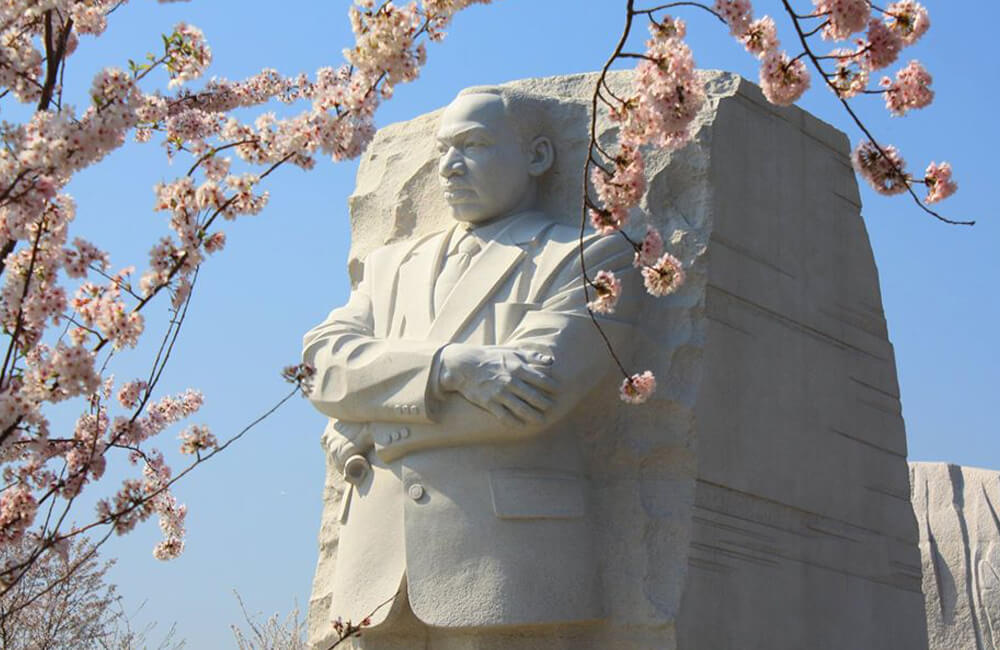 The memorial also features a 450-foot long wall with inscriptions of King’s many inspirational speeches and sermons. Fittingly enough, when the memorial finally opened in 2011, its ribbon cutting was presented by President Barack Obama, America’s first Black president.

We all know the Statue of Liberty was a gift from France to the United States, but did you know it was actually meant to be symbolic of the freedom of enslaved peoples after the Civil War? That’s right, the idea for the statue came from Édouard René de Laboulaye, an important French political thinker and a staunch abolitionist who fervently supported the Union winning the war. 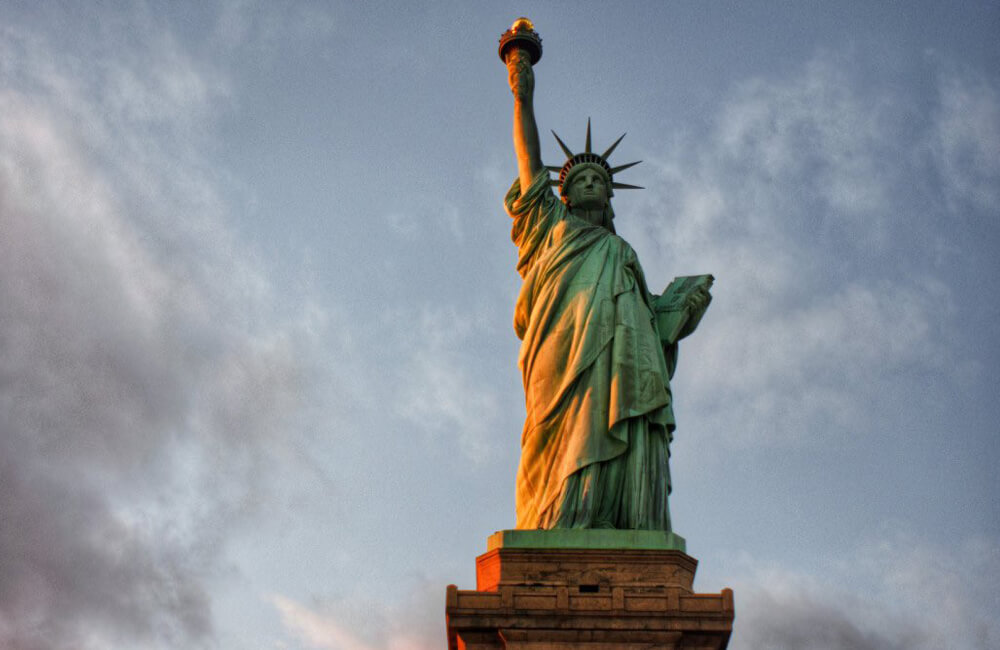 The 151-foot copper statue which was designed by French sculptor Frederic Bartholdi was so much intended to symbolize freedom of slaves that it actually was originally supposed to feature Lady Liberty holding a broken chain, but they decided this would be too controversial at the time.

Although World War II was over way before the Vietnam War, the World War II memorial wasn’t for more than 20 years after the Vietnam Memorial was complete. President George W Bush presided over the dedication ceremony in 2004. The memorial is administered by the National Park Service. 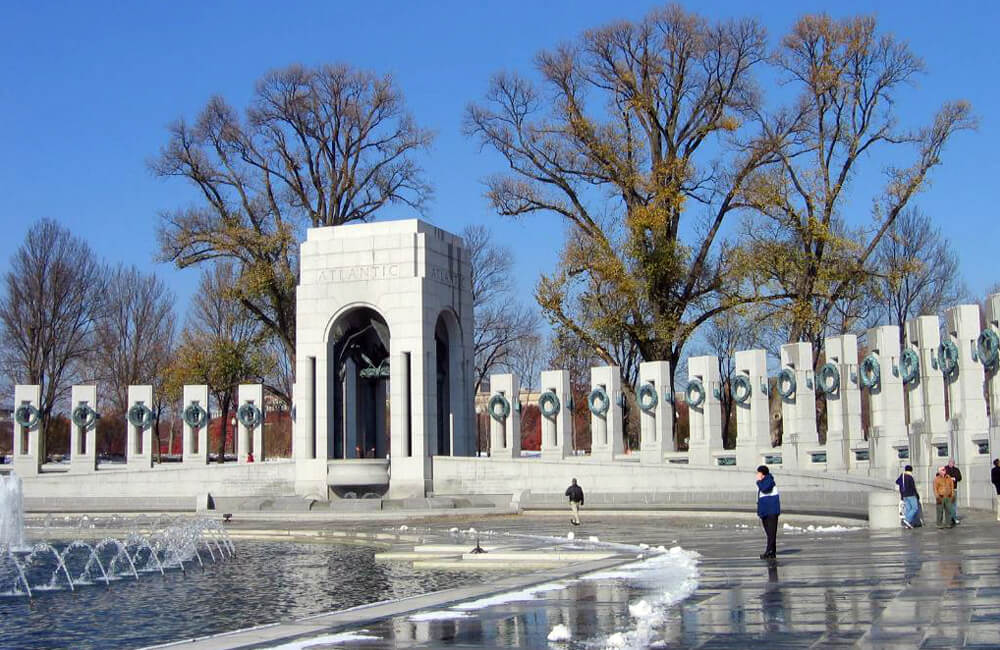 The memorial features 56 pillars of granite as well as two triumphal arches, all surrounding a mesmerizing fountain. The pillars represent all of the 48 US states in 1945, plus 8 more territories and American commonwealths. It rests next to the Reflecting Pool, opposite the Lincoln memorial.

There’s no question that FDR, America’s longest-serving president, deserves to be memorialized with a national monument. He presided over the US involvement in World War II, tasked with the difficult decision of when to join the war. 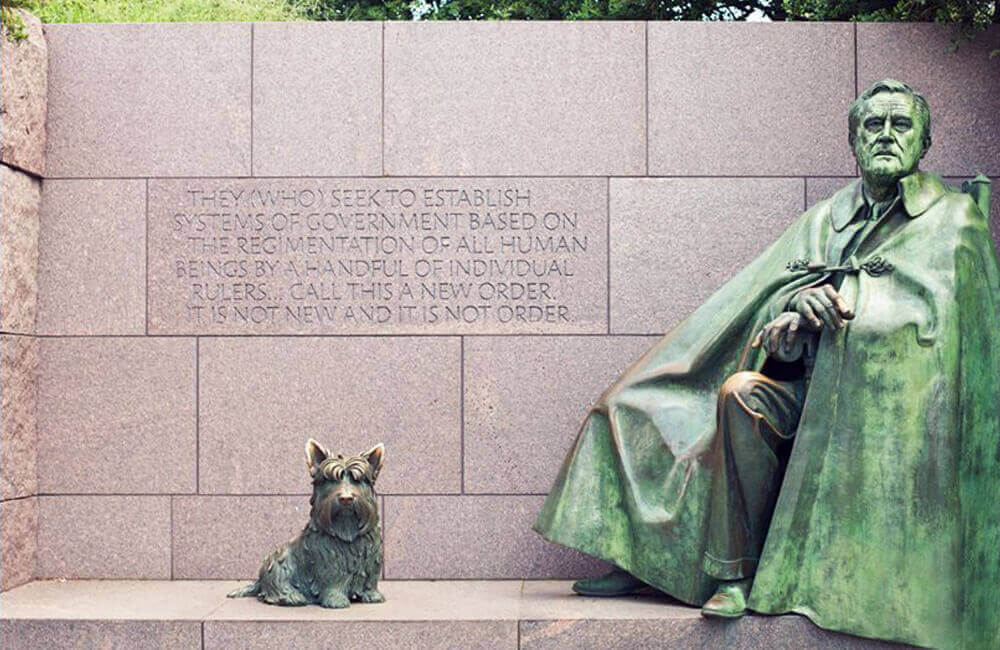 Built into an epic stoneface known as the Six Grandfathers by the Lakota Sioux, the Native American tribe who originated on the land, Mount Rushmore is an impressive feat of engineering recognized the world over. The iconic American landmark features 60-foot-tall carvings of George Washington, Thomas Jefferson, Theodore Roosevelt, and Abraham Lincoln. 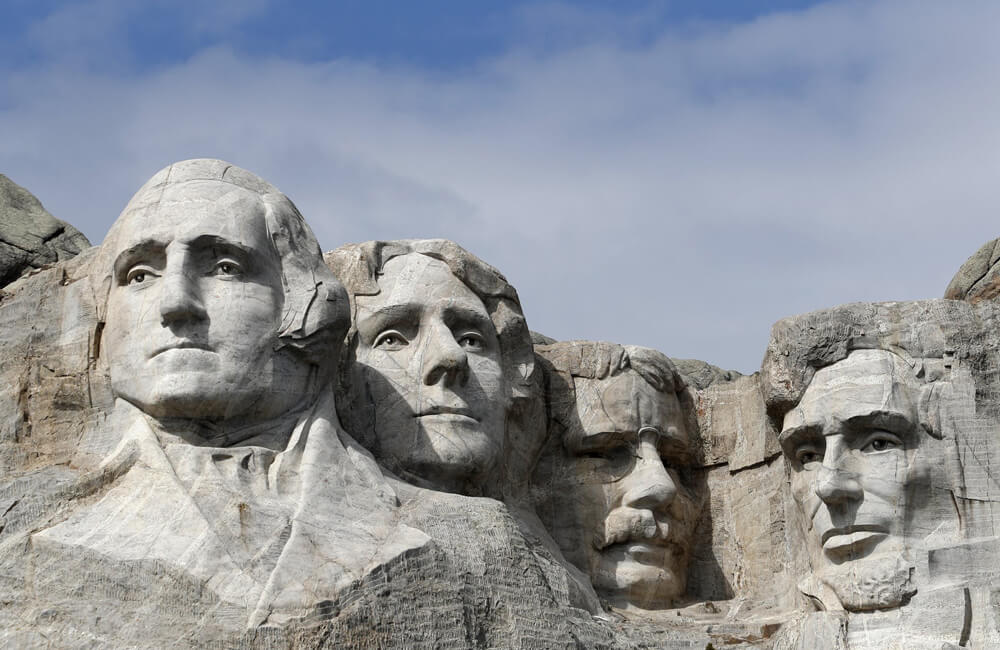 Many who made the trek out to South Dakota to visit don’t know that Mt. Rushmore is actually unfinished, as it was originally intended to feature complete busts of the Presidents, with the design going all the way down the face of the mountain. However, when sculptor Gutzon Borglum died in 1941, construction ended rather abruptly.

In 1934, President Franklin Delanor Roosevelt personally sponsored and advocated for the building of a memorial for Thomas Jefferson. The design for the memorial actually had begun almost 10 years earlier and was inspired by Jefferson’s own design for the rotunda at the University of Virginia. 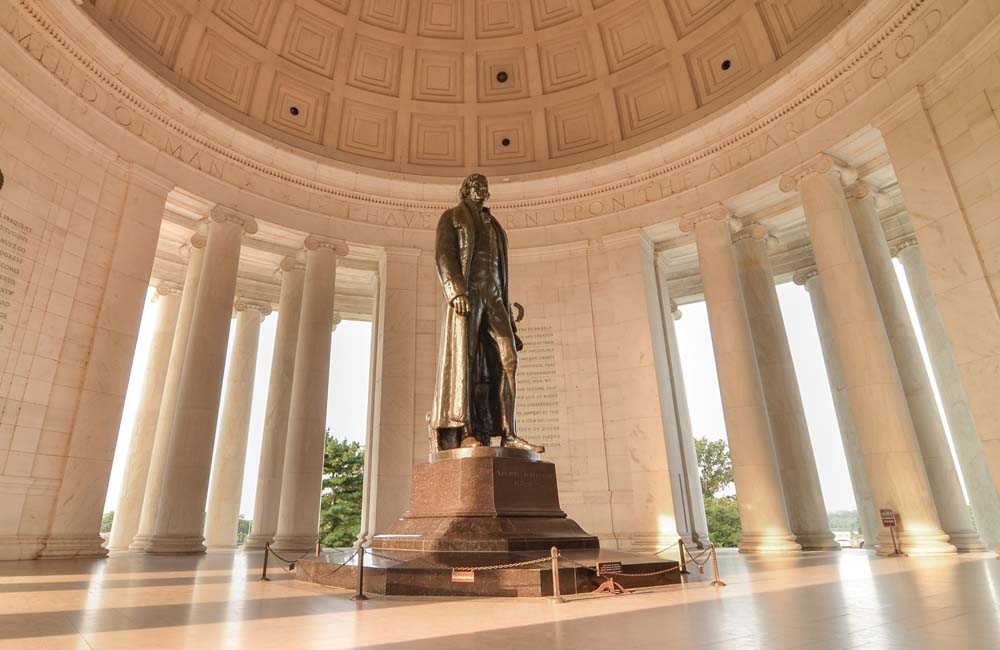 The structure itself is made of white Imperial Danby marble and also features a 10,000 pound, 19-foot-tall bronze sculpture of Thomas Jefferson standing proudly and poised with honor. Quotes from the Declaration of Independence which Jefferson penned himself, are etched around the interior of the memorial.

This national monument honors Juan Rodriguez-Cabrillo, who was the first European explorer to arrive on America’s west coast. The monument is located at the southern tip of the Point Loma Peninsula near present-day San Diego, California. 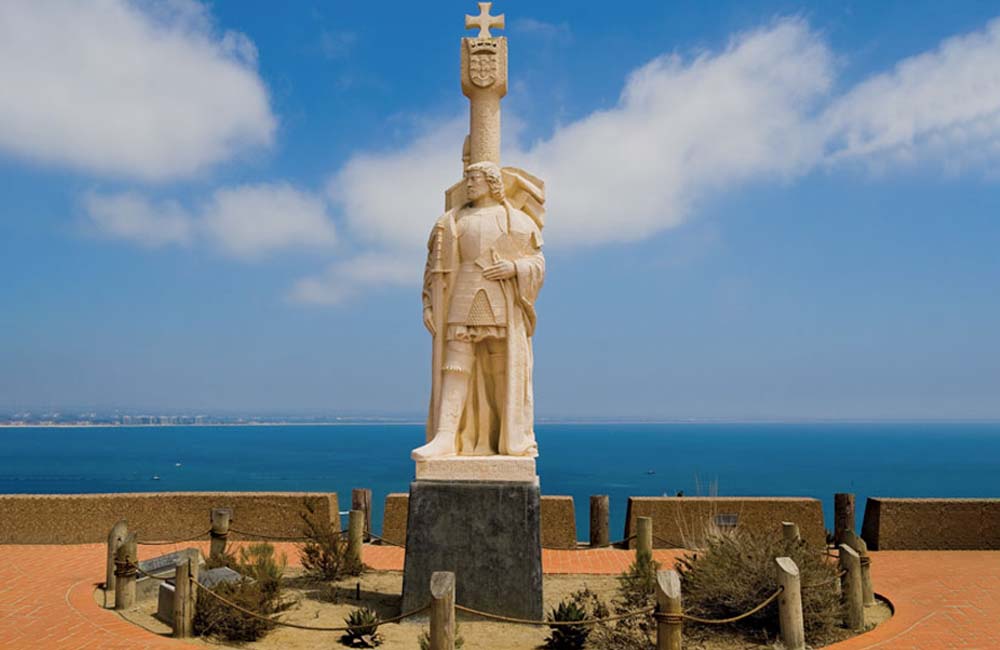 President Woodrow Wilson initially proposed the monument in 1913, but it finally completed until 1949 after the 14-foot sandstone statue of Cabrillo, donated by Portugal, was finally installed at the Point Loma location. The sandstone did not do well in the elements, and in 1988, it was completely replaced by a replica made of limestone.

The iconic Gateway Arch of St. Louis is actually the official Jefferson National Expansion Memorial, honoring Jefferson’s role in expanding American’s territory into the west, mainly through the Louisiana Purchase from France. 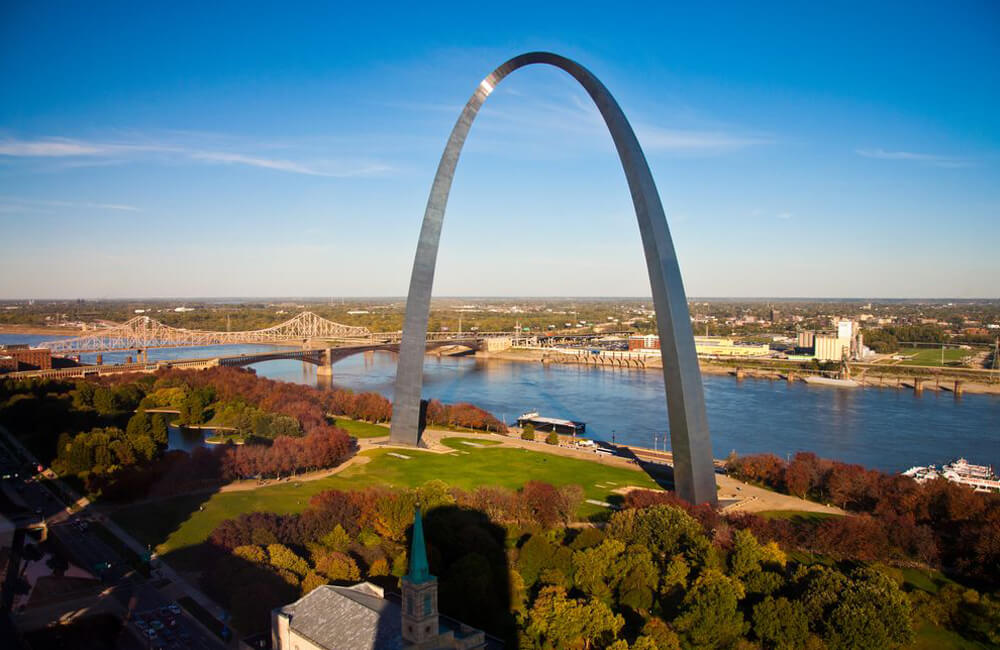 The mathematically designed arch is as tall as it is wide, at 630-feet-tall it is the tallest National Monument in the United States. In addition to symbolizing western exploration, it also is dedicated to Dred Scott, whose suit for freedom from slavery was an inciting factor for the Civil War.

Aviation pioneers Wilbur and Orville Wright were so dedicated to their cause that they moved from Dayton, Ohio all the way down to the Outer Banks region of North Carolina, purely based on research of wind speeds and weather in the area. 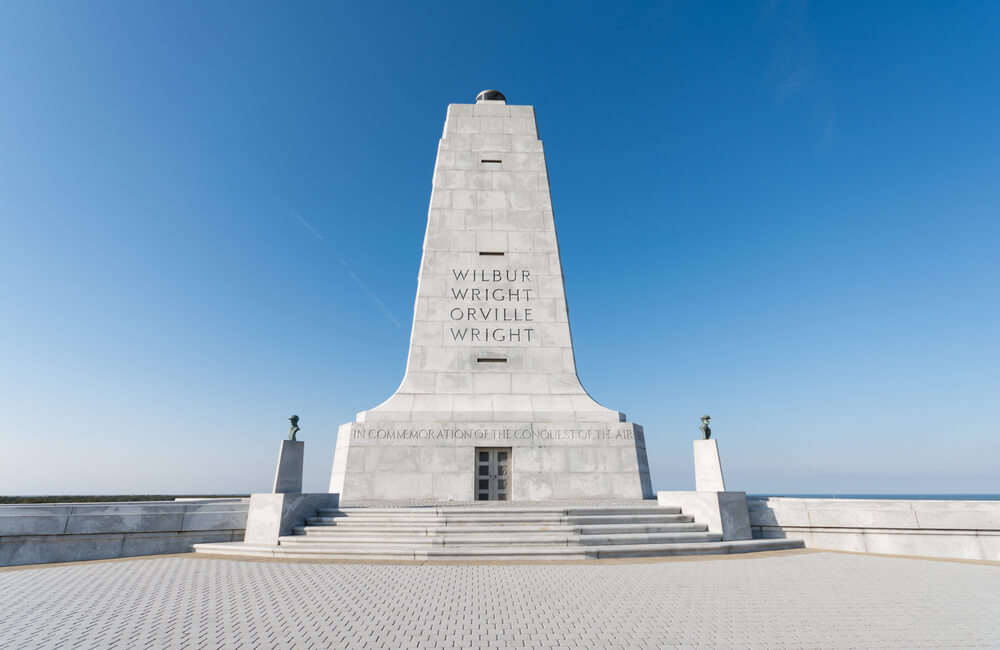 After three years of experimenting with gliders, the Wright Brothers performed 4 successful flights on December 17th, 1909. The memorial features a scale replica of their Wright Flyer, but the original aircraft rests at the National Museum of Air and Space in Washington, DC.

Builders in the early 1750’s probably had no idea that they were constructing what would become one of the most important buildings in American history. Independence Hall was initially just the Pennsylvania State House, but it soon became the home of the 2nd Continental Congress which debated and authorized both the Declaration of Independence and U.S. Constitution.

The building itself was renovated many times over its 250-year history, and not until 1948 was it designated as an official national monument by Congress. The iconic Liberty Bell once hung in the steeple of the building but now is preserved in a display adjacent to Independence Hall.