Buildings aren’t just bricks and mortar, they can be important reminders of iconic times in history. You just have to look at the Watergate scandal to recognize how these locations can become larger than life, cemented in the very foundations of public consciousness. Oftentimes, millions of dollars go into creating these elaborate structures…but are they always built to last?

The following buildings were completely totaled for one reason or another. It could be structural issues, or simply the whim of new leadership wanting to keep up with the times. Either way, it’s sometimes hard to understand why companies spend a fortune building stunning edifices, just to raise them to the ground years later.

In 1923, the stadium that Jacob Ruppert (the then owner of the New York Yankees) had paid $2.4 million for (out of his own pocket) opened. Over the next eight decades, the stadium was home to all-time baseball greats like Mickey Mantle, Joe DiMaggio, Roger Maris, Derek Jeter, and countless others. 26 World Series banners were hung from the stadium’s rafters at the end of its run. 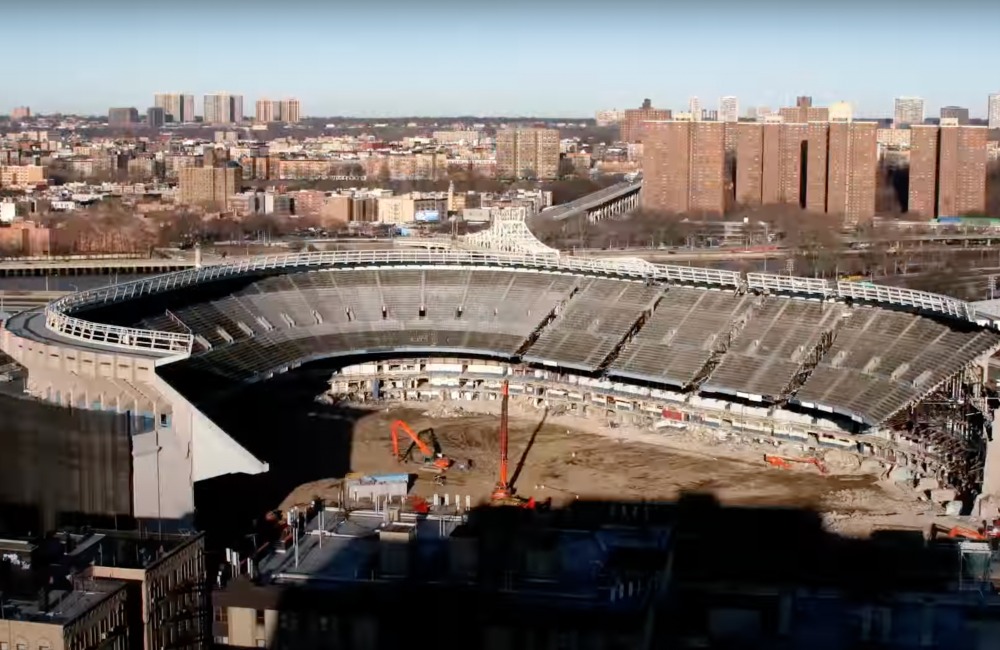 Following the conclusion of the New York Yankees’ 2008 season, after 85 years of hosting MLB and NFL games, various concerts, conferences, presidential rallies, and dozens of other types of events, New Yorkers bid their final farewell to “The House That Ruth Built.”

The Call Building in San Francisco was not demolished per se. Rather, after the 1906 San Francisco Earthquake, a fire nearly consumed the entire structure. Its foundation was left standing, however, and the building was refurbished to the point where it looked like a brand new building — and was subsequently given a new name.

Originally standing 315-feet-tall and decorated with a baroque dome, when its renovations were completed in 1938, the newly named Spreckles Building no longer had its identifiable dome, nor did it still top 300-feet in height (it now stood at 299 feet).

In 1984, the Trump Plaza Hotel and Casino was just a hotel when it first opened. It wasn’t until 5-years-later that the casino was added to the property’s repertoire. After experiencing some early gains in Atlantic City, the Trump Plaza hit a pretty hard wall in the 2000s and closed for good in September 2014. 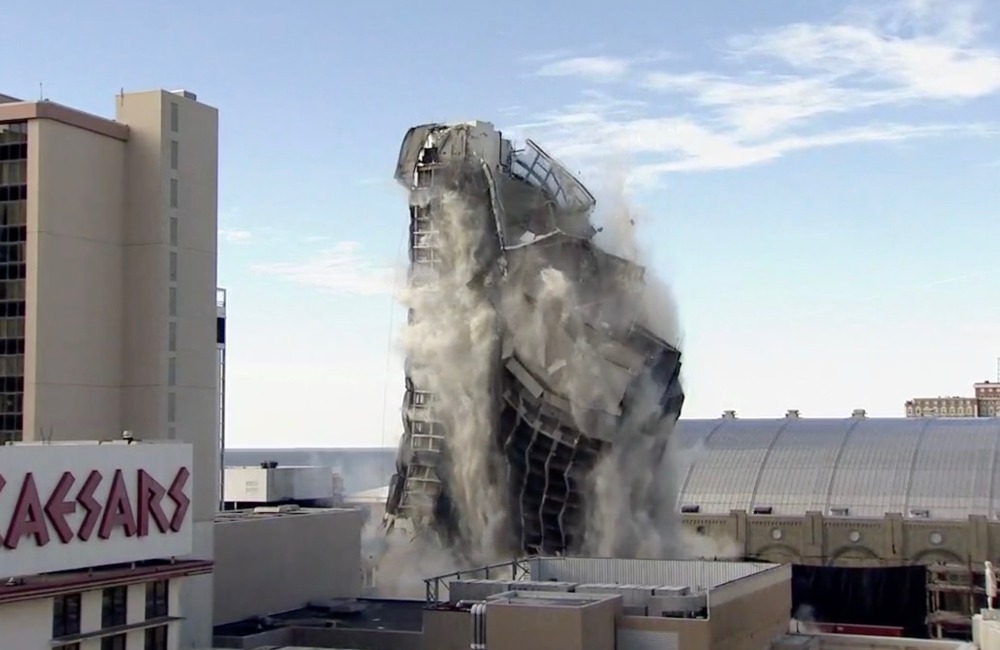 Formerly named Bankers Trust Plaza, but known as the Deutsche Bank Building at the time of its demise, this skyscraper was designed by the same firm that designed the Empire State Building. Having been located next to the former Trade Center (when the attacks of 9/11 took place), the Deutsche Bank Building was contaminated with numerous dangerous substances and was deemed unfit for occupancy from the date of the attacks. 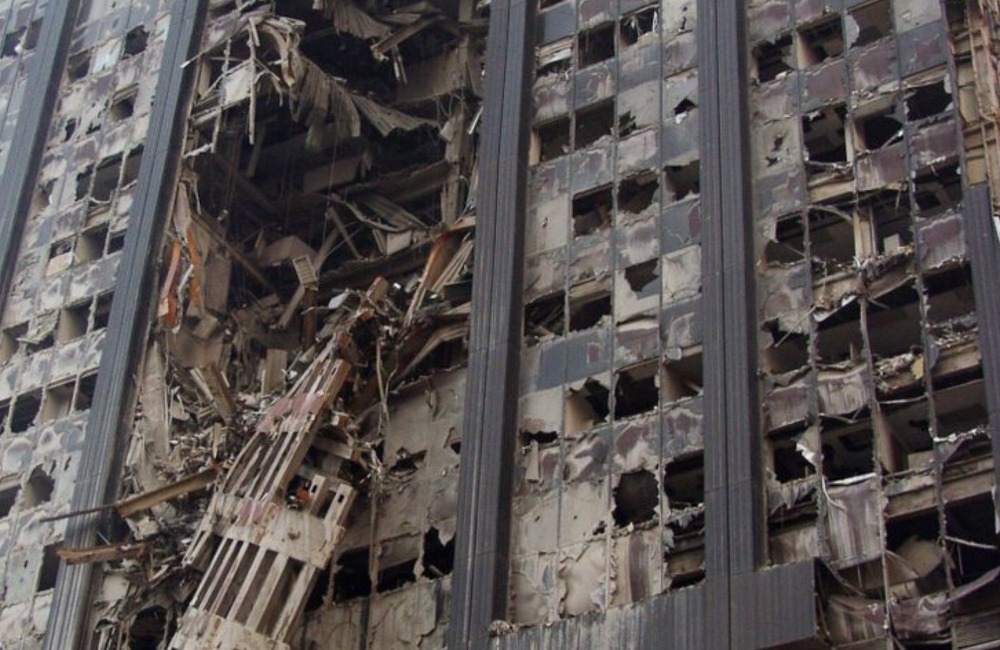 Half a decade after the disaster that caused irreparable damage, the decision was made to demolish the . It took only two years to construct the 39-story building but almost four years to take it down.

When New York’s Pennsylvania Station opened in 1910, it became the first station to host a direct line that connected the southern States to New York. After the Second World War ended, there was a noticeable decline in commuters. By the end of the 50s, the Pennsylvania Railroad made the tough decision to downsize the station’s size by selling the space above ground.

The demolition of the non-subterranean parts of the station took place between 1963 and 1968. During that time, a restoration project (that took around six years to complete) took place over the subsequent six years and culminated with the opening of the new “modern” Penn Station.

Designed by the Preston M. Geren & Associates architecture firm, the Landmark Tower, formerly located at 200 West 7th Street in Fort Worth, Texas, was built between 1950 and 1957. At the time, the Landmark Tower was the city’s tallest building and cost approximately $6 million to construct, but it was abandoned in 1990 — just 33 years after completion.

In 2004, XTO Energy purchased the property with hopes of refurbishing it. In the end, the $62 million that it would have cost in order to do so was too much. Alternatively, the 30-floor tower that had remained idle for more than 15 years in central Forth Worth was demolished in 2006.

Built using federal money, the 33-story high-rise building of the Pruitt-Igoe housing project was erected in order to provide better living conditions than one would have found in the slums. However, due to the poor management and maintenance of the project, it took less than 20 years for the conditions of the buildings to resemble the slums they were intended to replace. 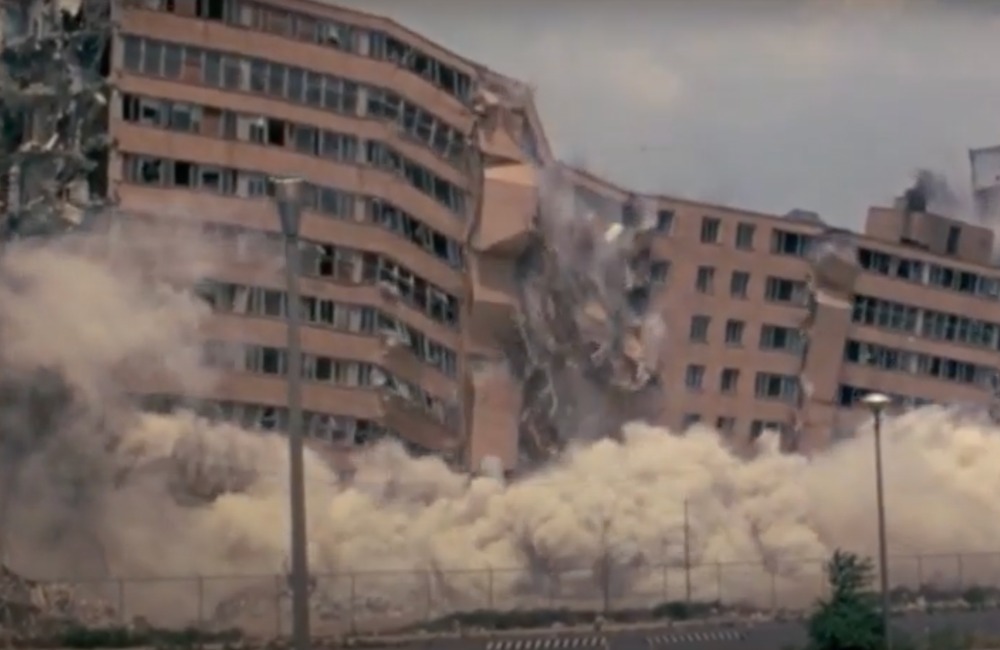 The demolition of the Pruitt-Igoe projects took place in a few stages. The first of which was during a live television broadcast in 1972, in which a handful of the 11-story building was brought down via explosives. The remaining housing units were destroyed by the end of 1976.

Ebbets Field stood for less than 50 years, but in that time, it was home to five football teams (3 NFL) and one of the most well-known sports franchises of the first half of the 20th century — the Brooklyn Dodgers. As such, Ebbets Field was where Jackie Robinson broke Major League Baseball’s color barrier. 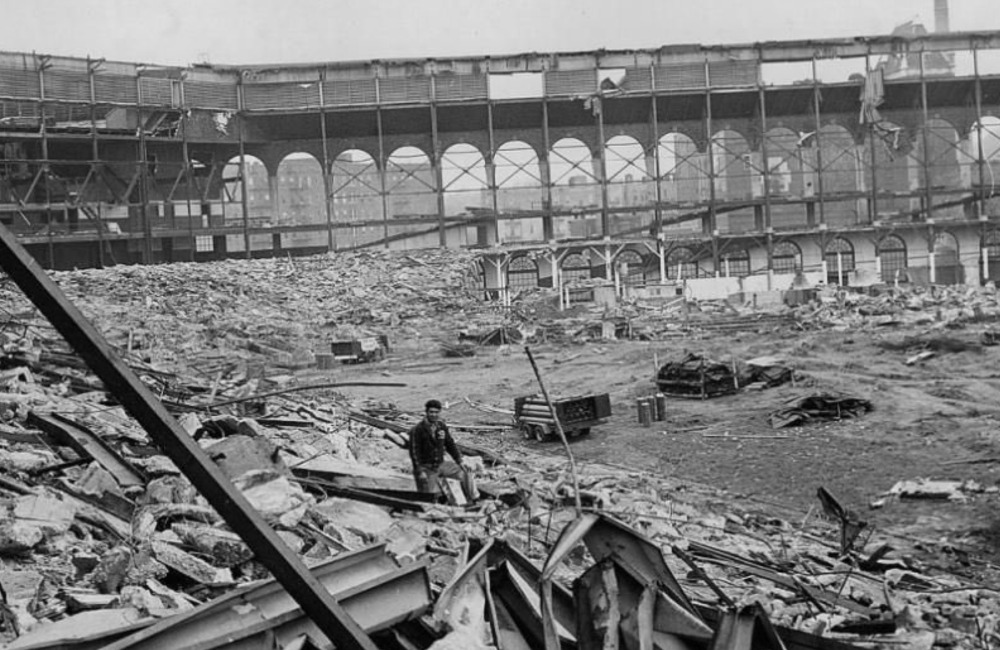 Money always speaks louder than history when it comes to business, and, although the legendary stadium was riddled with the latter, it was still demolished in 1960 in favor of the former. The aptly named Ebbets Field Apartments were built in its place and later renamed after Jackie Robinson himself.

The story behind the Zhongyin Building in Shenzhen, China’s Futian district, and why the building was demolished without ever opening for business is what some would call an “old wives tale,” if you will. Long story short, the building was erected on a piece of land where executions (at one point) took place regularly. 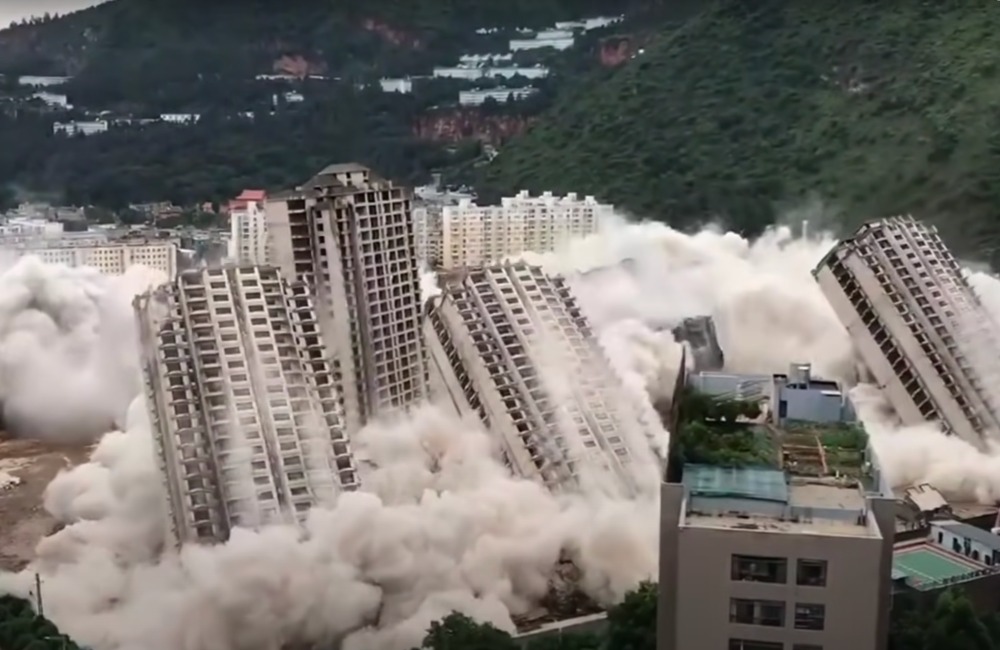 Stories of strange things occurring on the grounds ran rampant amongst those working in the area, and a good old-fashioned haunting of lost souls was the only logical explanation anyone could come up with. Whatever the real reason was, after being completed in 1997, Zhongyin building never opened. Instead, it was imploded in 2004.

1891 will forever be remembered in Milwaukee as the year the city’s first skyscraper, the Pabst Building, was erected. If the name Pabst sounds familiar, it should. This building’s namesake is the same Pabst that brews Pabst Blue Ribbon and the numerous other beers that come out of the Pabst brewery. 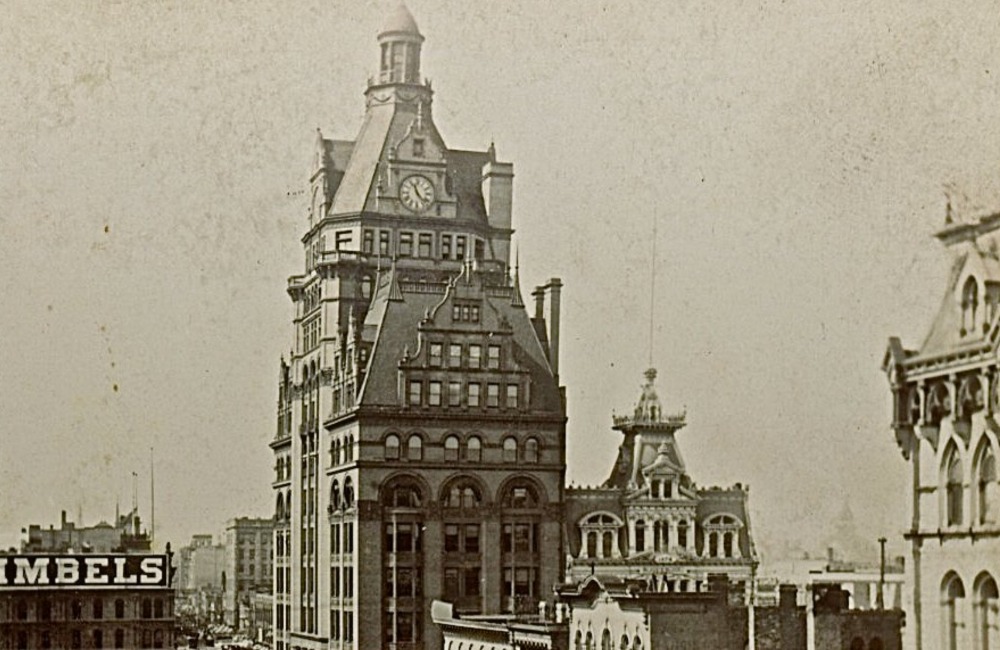 A decade short of its 100th anniversary, and after countless repairs and renovations, it was finally time to say goodbye to the Pabst Building. It was demolished in 1981 and is still the second-tallest building to be razed in Wisconsin’s history.

Meena Plaza I was intended to be a considerable part of the Abu Dhabi skyline’s rapid development in the 2000s. So huge that its design had it taking up more than 2.6 million square-feet of real estate. Building of the Meena Plaza commenced in 2007, and by 2012 the high-rise plaza had been topped-out, but that’s where its progression ended. 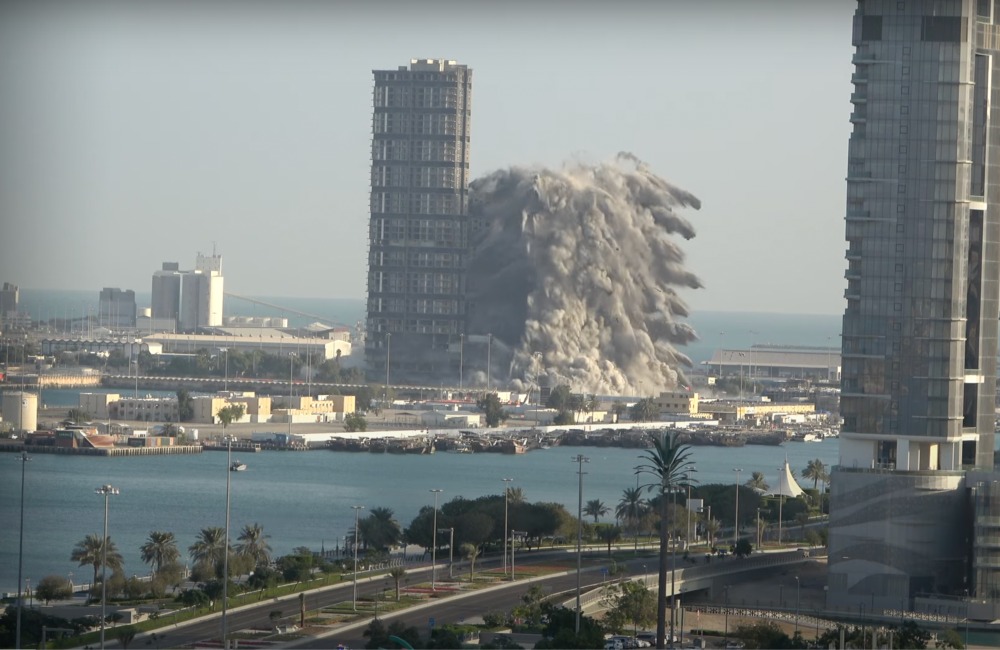 After sitting idly by doing nothing but taking up space for almost a decade, the Abu Dhabi authorities finally decided to remove the half-finished project from view. In 2020, Meena Plaza I in Abu Dhabi became the tallest building to be demolished by implosion.

Built in the late-‘60s and opened in 1968, Flint, Michigan’s Genesee Towers were developed by Henry Sender and consisted of 19 floors — eight of which belonged to a parking garage located beneath ten floors of offices. Including its 76-foot antenna spire, the Genesee Towers in Flint, Michigan, was 326-feet-tall. 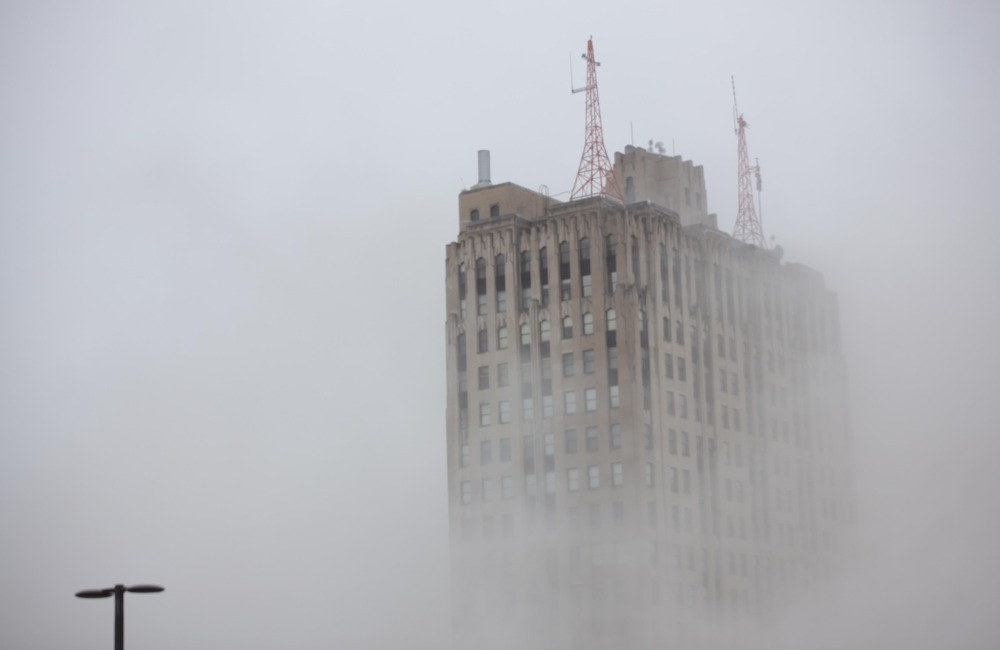 By the turn of the millennium, the Genesee Towers was experiencing more maintenance issues than it could keep up with, and in 2007 safety inspectors announced the risk of concrete falling from the building and onto the road below. For the safety of everyone around, the building was demolished in 2013. While it was still standing, the Genesee Towers was the tallest building in Flint — which also made it Flint’s tallest building to be demolished – and demolished by implosion.

Designed by Vincent Kling & Associates, construction of the 38-storey One Meridian Plaza began in 1968 and took four years to complete. The $40 million building had an area of 756,000-square-feet and even had not one but two helipads on its rooftop. 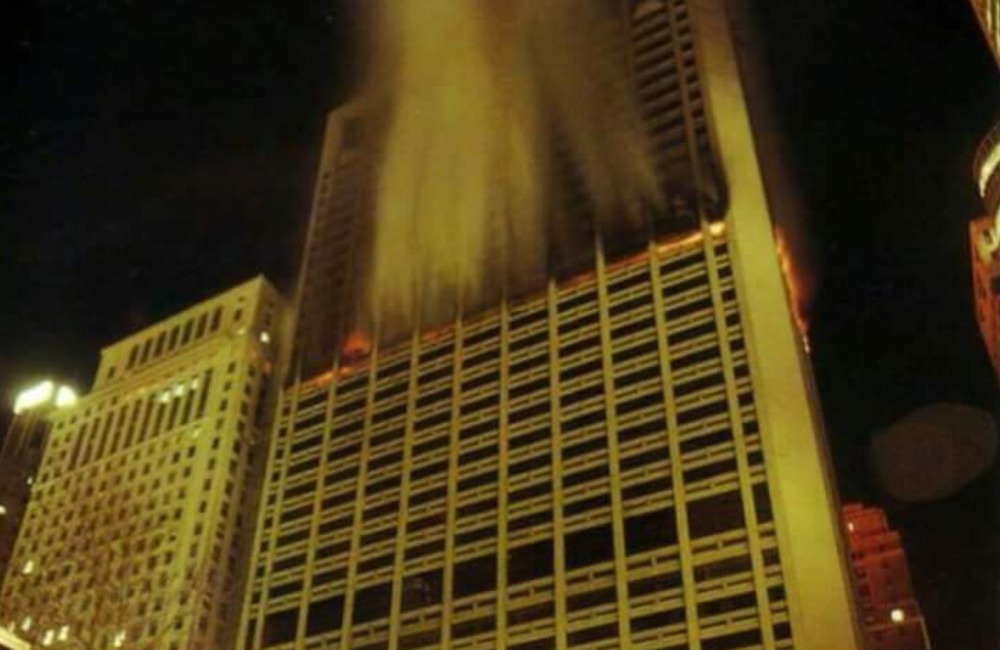 Due to a fire that broke out inside the building in 1991, One Meridian Plaza’s time in Philly was cut short. It would survive another 8 years before being demolished. Unfortunately, those remaining years were filled with lawsuits and dismay instead of the booming business of which the building had grown accustomed over the years.

In the early-1900s, the North American real estate scene was going through an evolution of sorts. Buildings were being built faster and taller than ever before, and New York City was at the forefront of it all. Not a decade after the Singer Building took its place amongst the clouds of Manhattan, the 33-storey City Investing Building followed suit and moved in next door. 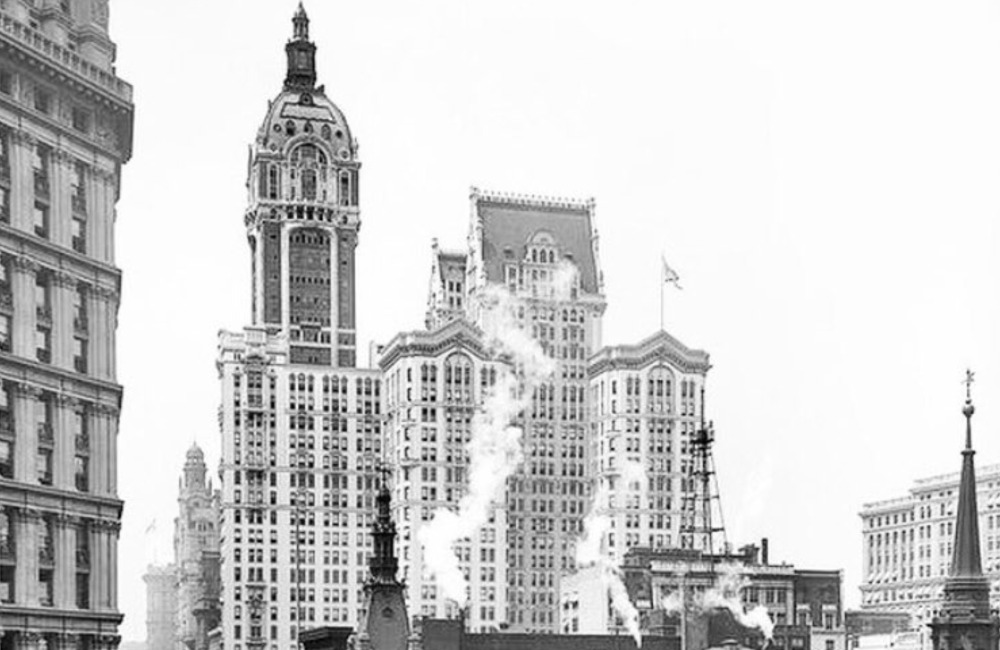 Both the City Investing Building and the neighboring Singer Building were demolished in 1968, partially because they were becoming run down but mainly because the plans for One Liberty Plaza called for more than twice the combined space of the former buildings.

Cooking Hacks That All At-Home Chefs Should Know
Cooking can be a joyous experience, allowing you to nurture yourself and the ones you love. But it can also feel like a chore, and a challenge to keep coming up with new meal ideas. From grocery shopping to prep work to cleaning up, it’s easy to feel overwhelmed when faced with dinnertime. For most […]
Road Trip Hacks That Will Save You Time And Money
Going on a long road trip with family or friends can be a great experience for everyone – if it’s done right. Go into it with no clear plan and it can quickly descend into chaos, especially if you’ve just thrown everything into the car on a wing and a prayer.  Taking some time to […]
These Baking Hacks Save Time And Money
Baking can be a real treat, not just because it produces some incredible food, and plenty of batter-covered spoons to “clean”, but because the practice itself can be relaxing and soothing. Whether you’re a pro baker or you simply bought too many bananas and want to turn them into bread, knowledge is power.  Getting more […]
Canceled?! These Big-Budget TV Shows Are On The Chopping Block
The success of a television series is, more often than not, determined by the number of viewers that tune in to watch the program and the ratings that it receives. The more costly a show is to produce, the higher numbers it needs to have in order to back up the cost, otherwise, the network […]
Advertisement