Mexico is a country famous for its ancient ruins, rich culture, incredible cuisine, and dazzling beaches. When you visit the country, you can tour Mayan temples by day and listen to live music on the beach at night, all while eating amazing food. Mexico’s tropical beaches are full of vibrant marine life and corals, too. There’s something for everyone in this colorful country.

While you’ve likely heard of all this before, this article is about things in Mexico that you might not have realized even existed. From wacky to weird to awesome, here are some of the coolest events, goods, locations, and more that Mexico has to offer. We guarantee you’ll want to hop on a Southwest flight and head down for vacation after reading.

Who doesn’t love tacos? Tacos are one of the best-known foods to come from Mexico. This classic cuisine has been copied all over the world, from fast-food restaurants to high-end resorts. In 2017, the Grand Velas Los Cabos, a super-fancy resort in Cabo San Lucas, put a $25,000 taco on the menu. 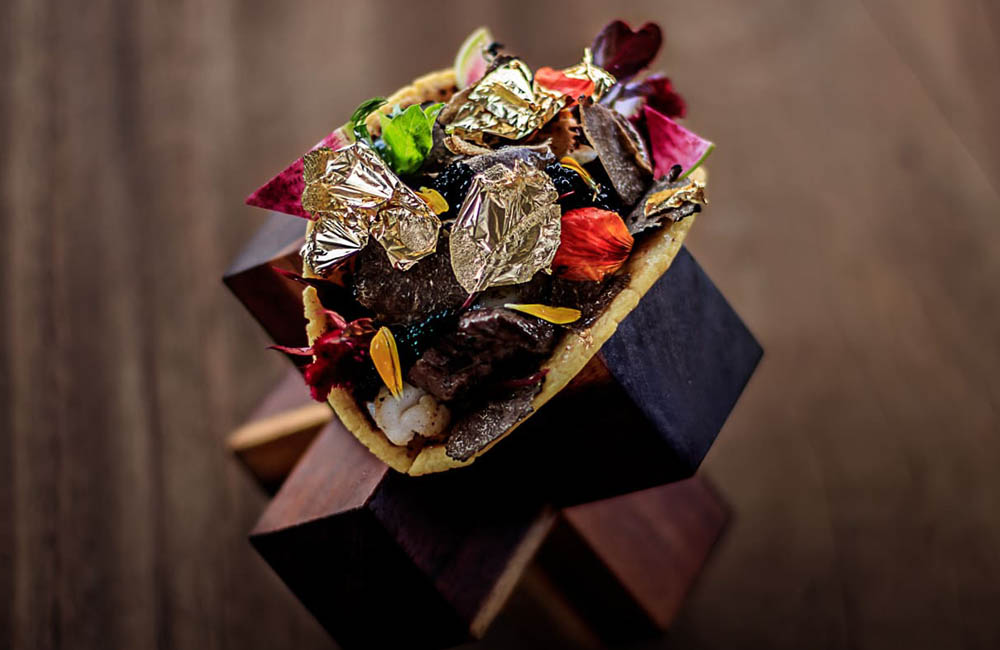 As you might have guessed, this wasn’t anything you’d see at Taco Bell at 3 A.M. This decadent taco features Kobe beef, truffle cheese, and caviar, all wrapped inside a tortilla infused with gold. This five-star food was invented by Los Cabos head chef Juan Licerio Alcala.

Found in: Underneath the Yucatan Peninsula
Est. Cost: Worldwide Extinction

One fascinating natural site you’ll find in Mexico is the Chicxulub Crater. Nicknamed the “Dinosaur Death Hole,” the Crater is buried beneath Mexico’s Yucatan Peninsula. The impact crater formed after a large, 6.21-mile asteroid slammed into the Earth. 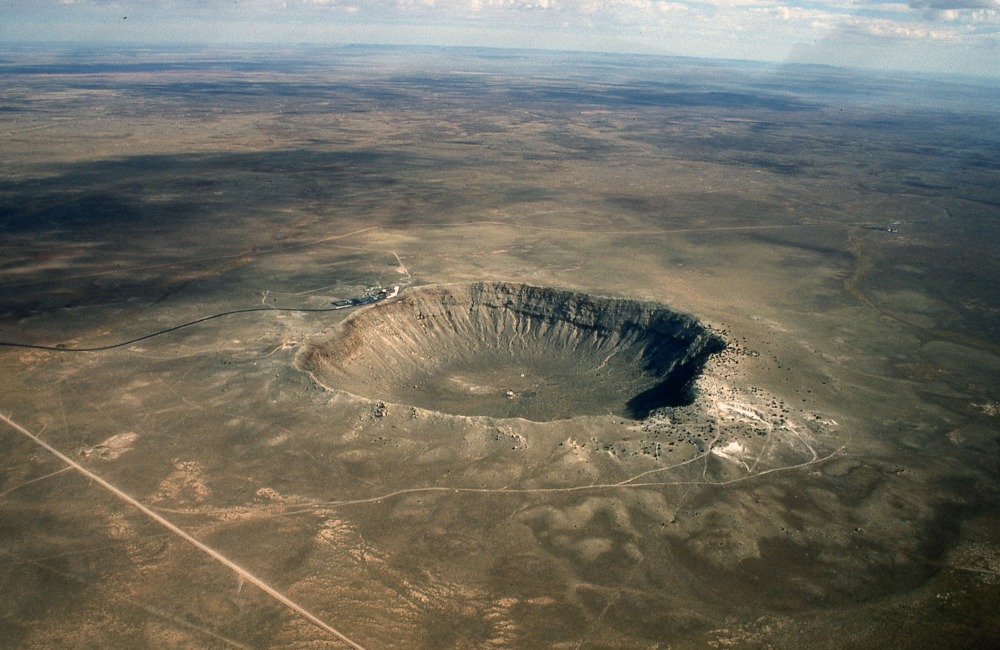 As you might have known from watching National Geographic, a gigantic asteroid killed the dinosaurs. Yes, Chicxulub is the very same asteroid that caused the mass extinction of our planet’s former giant-lizard inhabitants. The asteroid hit 66 million years ago, bringing with it imminent destruction that led to the death of almost every living thing on the planet at the time.

You’ve heard of Jesus showing himself to people on a slice of toast, so get ready for Jesus on a mushroom. Usually, if you see a Christlike figure on a mushroom, you’ve probably just ingested it for psychedelic purposes. However, in the town of Chignahuapan, Puebla, that is not the case. 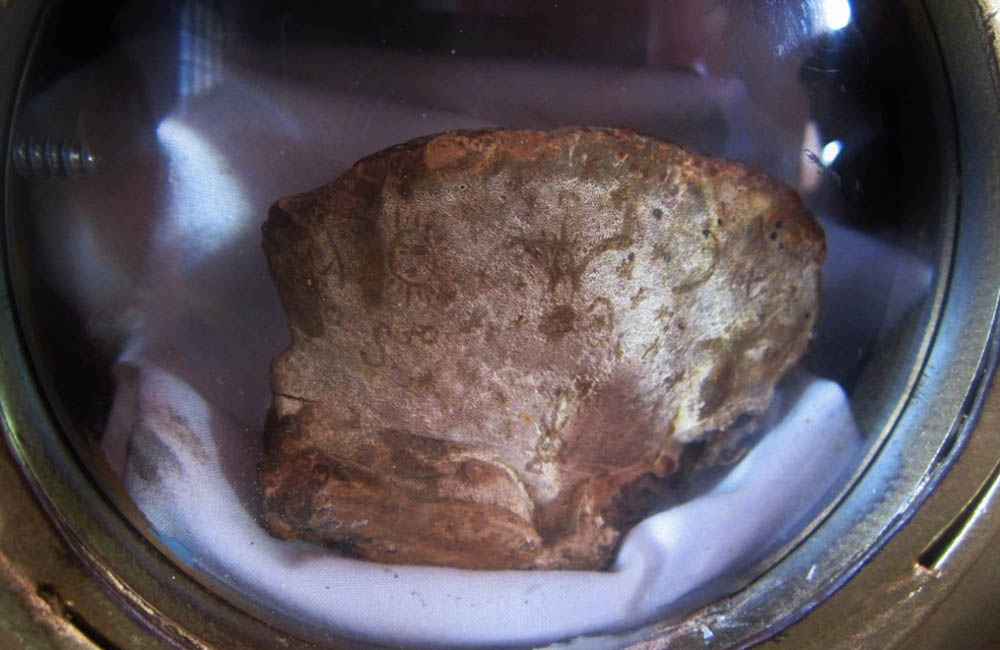 Locals swear that they can see a figure of Jesus in the groove of a mushroom. The mushroom has been kept inside the Church of the Tree Ear, which was built specifically to honor this shroom image, for 136 years. Perhaps we’ll see a Netflix documentary about this heavenly fungi.

Created by artist Edward James, Las Posas is a delirious, surrealist garden full of structures that tower 2,000 feet above sea level. The display contains over eighty acres of sculptures created from concrete. These installations are juxtaposed among natural pools and waterfalls throughout the Sierra Gorda rainforest in Mexico. 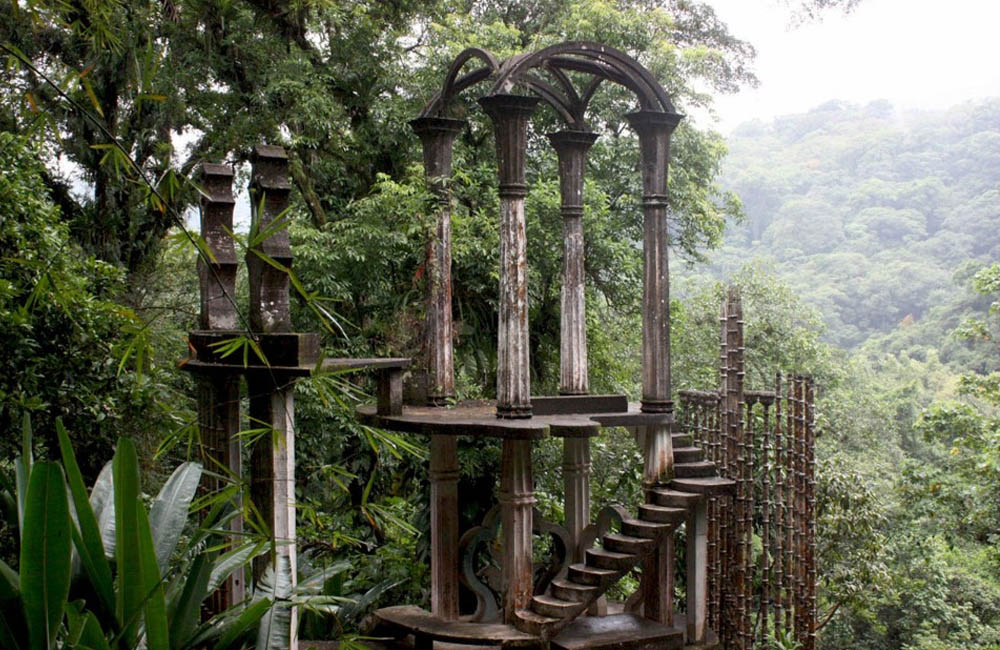 Tickets are pretty cheap, costing less than $2 (about the same price as a bottle of water from Walmart. Edward constructed Las Pozas because he believed that Mexico was, by its very nature, organically surrealistic. Through his art, he wanted to emphasize the natural, often mind-blowing beauty of the country.

This festival is unlike any other in the world. Every year, San Juan de la Vega hosts a religious fest that dates back to the 1600s. During the party, explosive hammers (sledgehammers with firecrackers strapped to the end of them) are slammed down onto the ground. The hammers detonate, sometimes sending the people slamming them flying into the air. 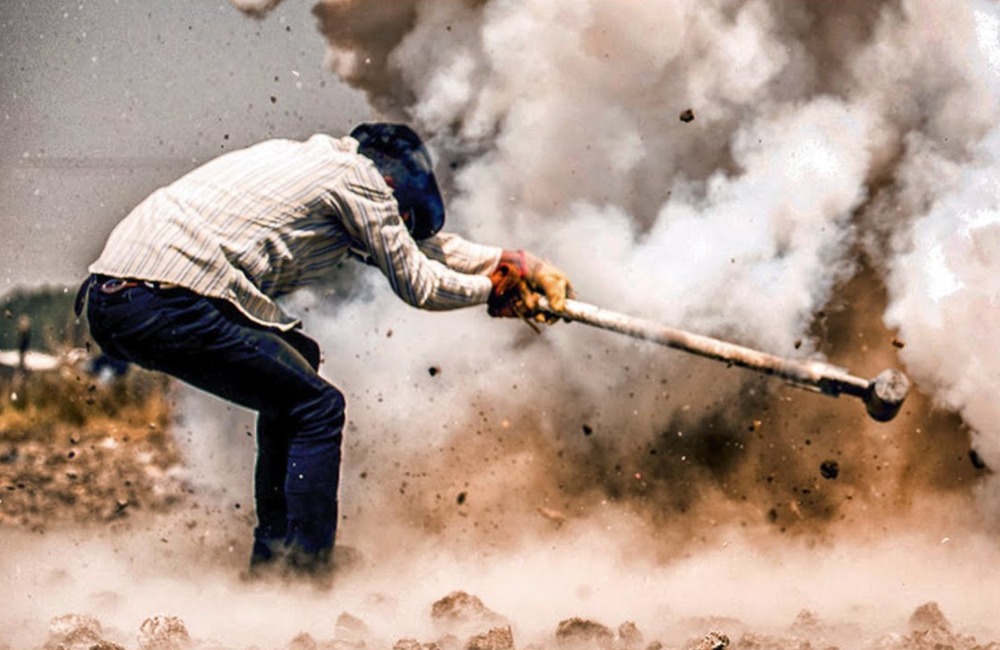 The tale behind the Festival of the Exploding Hammers is reminiscent of a Disney movie. In the 1600s, the town’s rich and poor were at war. During that skirmish, the two sides threw hammer bombs at each other. The conflict is celebrated every year around Lent in the most incendiary fashion possible.

Found in: Michoacan
Est. Cost: $2.77 per ticket to get admitted*

The Monarch Butterfly Biosphere is a World Heritage Site that contains the majority of the eastern population of the black-and-orange monarch butterfly. Every single year, these winged insects arrive in Mexico around mid-November. January and February are the months where you’re likely to see millions of monarchs. That is the time when the monarch population peaks. 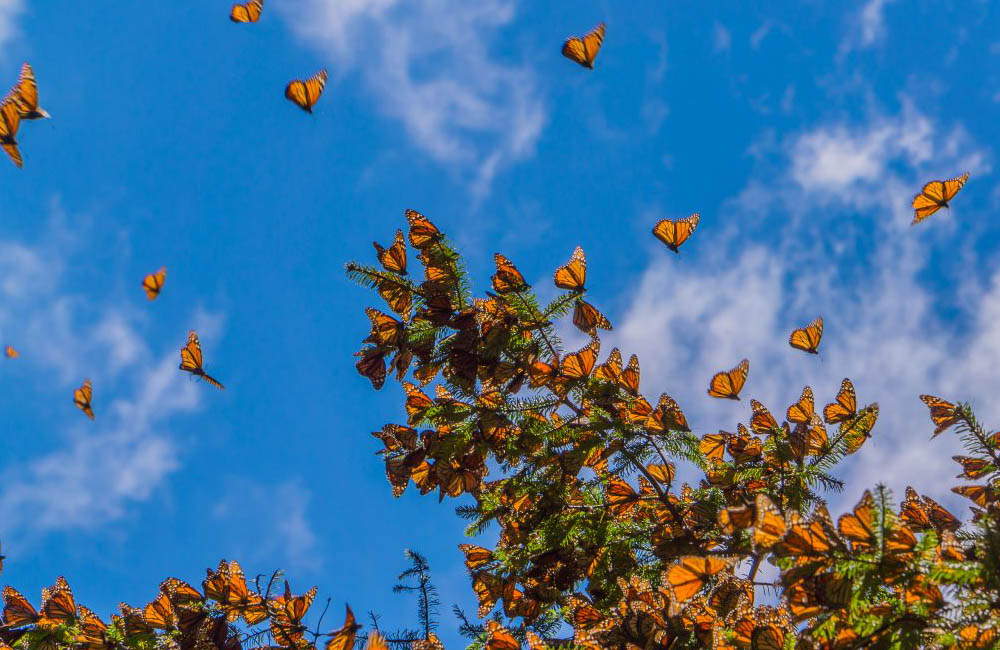 While you can see them at the reserve in Michoacan, you’re likely to find them everywhere. Though the New York Times warns that climate change and the political climate of Michoacan threaten these beautiful butterflies, conservationists at reserves like the Biosphere are fighting tooth-and-nail to save them.

Located in Laguna de Teshuila in Xochimilco, La Isla de las Muñecas (Island of the Dead Dolls) is one of Mexico’s most terrifying attractions. On the island, thousands of decaying dolls are strung from trees, providing a surreal, menacing landscape. The former owner of the island, Julian Barrera, said that hanging the dolls helped chase away the spirit of a little girl who had died on the island years ago. Barrera said that he found a young girl entangled in the lilies in Laguna de Teshuila. After the body was removed, he heard her crying for the doll. He hung one up, hoping her spirit would accept that. Then, every time he went outside, he’d see another doll strung from the trees. He died of a heart attack in 2001, and many people believe that the girl’s spirit was responsible. This sounds like a horror movie we’d find filling seats at theaters.

Ever seen a fish walk on land? Well, if you’ve seen an axolotl, you have. These are paedomorphic salamanders that are closely related to tiger salamanders. These are unusual among other amphibians because they reach adulthood without going through metamorphosis. They stay gilled and aquatic their whole lives—hence the “walking fish” nickname. 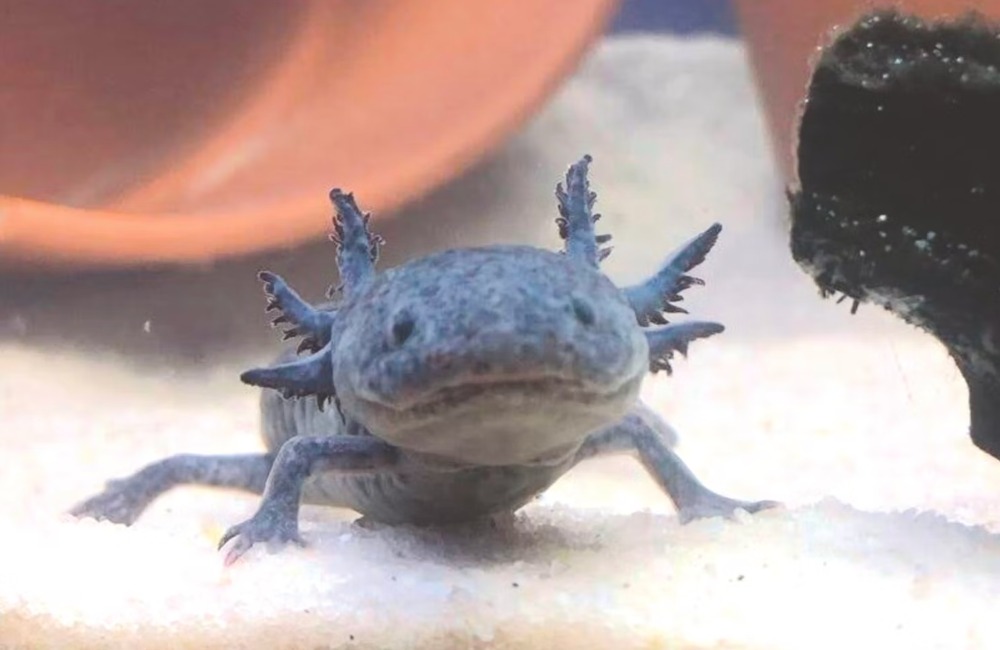 There is a legend behind this little salamander. Axolotl is the name of the Aztec god of lightning and fire. As the story goes, the god Axolotl disguised himself as a mere salamander to avoid being sacrificed. You won’t find an amphibian at with a cooler background than that.

Tequila is, effectively, the national drink of Mexico at this point. This distilled beverage is made from blue agave plants. These plants are generally harvested in the area surrounding Tequila, a city near Guadalajara, as well as Jalisco’s Highlands. Tequila is one of the most popular beverages in the world, with most bottles costing between $20 and $50. 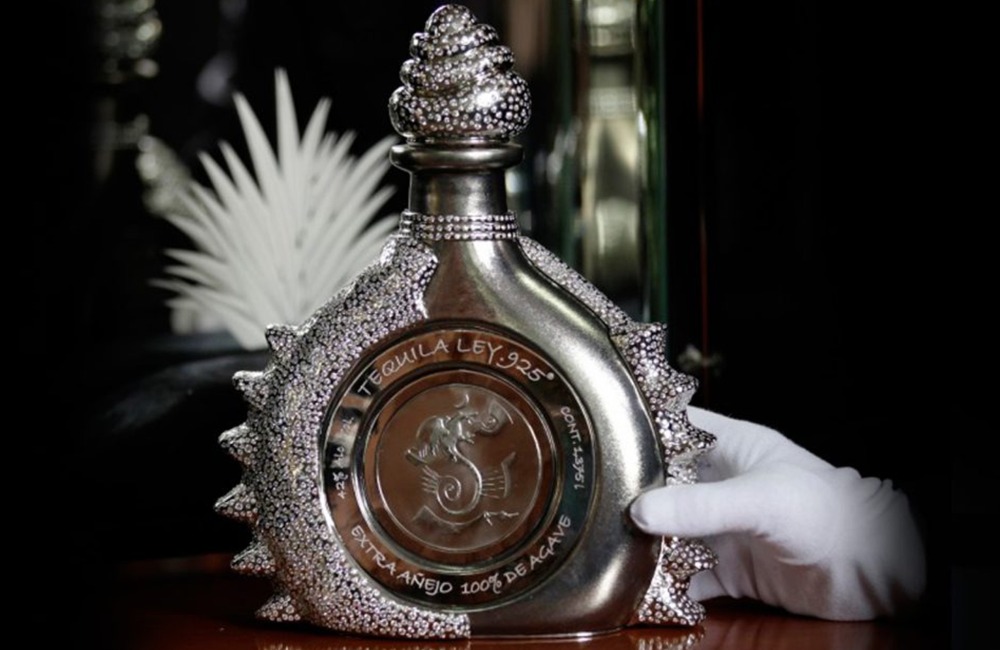 The World’s Most Expensive Bottle of Tequila @venturedmagazine/Pinterest
Advertisement

Don’t knock them ‘til you’ve tried them. If you’re an adventurous foodie, you might want to try the snack that locals in Oaxaca rave about: fried grasshoppers. Called chapulines in Mexico, these fried insects are seasoned with lime and chile, giving them a crunchy, salty, yeasty tang. One reviewer brave enough to try chapulines said they were similar to salt and vinegar chips, except the snack was a “bit wetter.” You can find them in restaurants for around $5. If you want to try them here, believe it or not, you can order these gourmet edible insects from Amazon for $7 to $24 a pack.

The Cancun Underwater Museum (Museo Subacuatico de Arte) is a fascinating, innovative project that is dedicated to teaching people about the effect that climate change has on the oceans and their reef systems. The museum contains five-hundred life-size, permanent sculptures created by Jason deCaires Taylor. 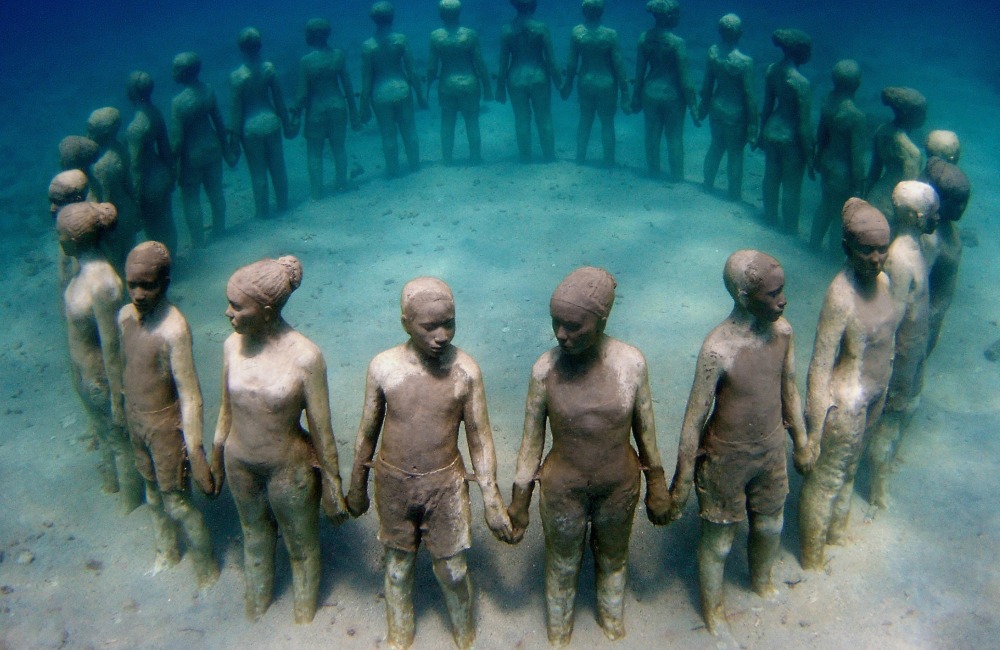 The underwater sculpture museum opened twelve years ago, and being able to see the statues decaying and changing really brings home the fact that oceans are going through a lot right now. Tickets cost $30 online, but you can undergo a snorkel tour for $58, if you really want to get up close with the MUSA installation.

It took six years to build what is known as Quetzalcoatl’s Nest. This fairytale-like destination is a sculpture garden located in the Valley of Mexico. Created by Javier Senosiain, a noted Mexican architect, the Nest was built to show reverence to the Aztec god Quetzalcoatl, who is depicted as a feathered snake in most artistic renderings. 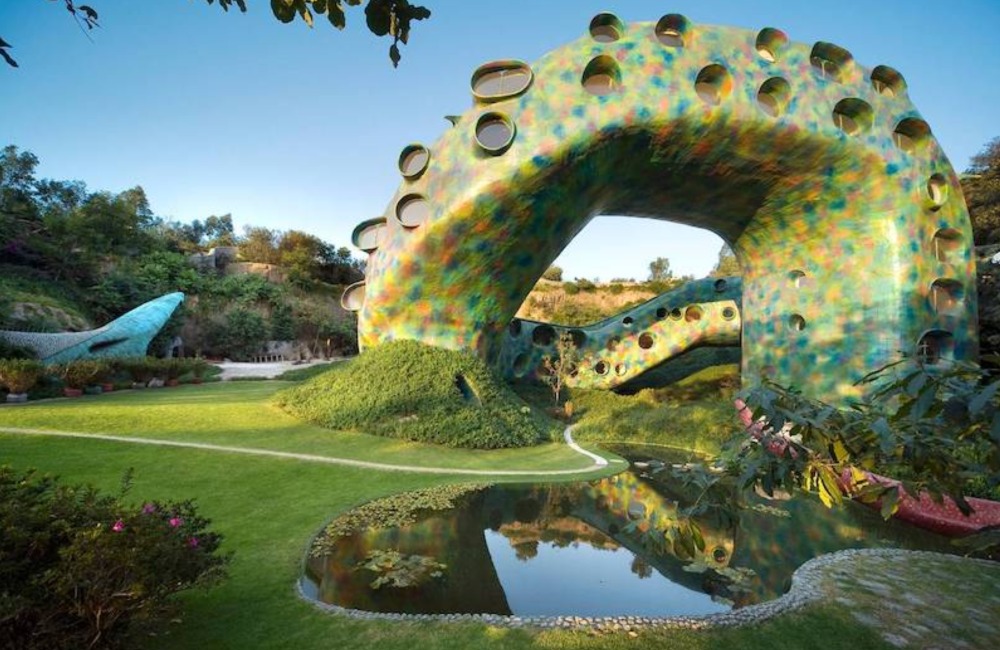 You can rent this location overnight, walking through the twisted ravine walkways (as long as you don’t mind exploring the jaws of an ancient Aztec snake god). The rental can host six guests in four bedrooms for a price of around $355 per night.

Found in: Naica, Chihuahua
Est. Cost: $3 per ticket to visit*

Another strange, unique place to visit in Mexico is the stunning Giant Crystal Cave. You can find it near a mine in Naica, Chihuahua. The Giant Crystal Cave is a landmark for Naica, and it is one of the region’s most popular tourist attractions. For good reason, as it is home to dozens upon dozens of huge crystals, some of which weigh as much as fifty-five tons. You can see the world’s largest selenite, sword-shaped crystals. The location was discovered one-hundred years ago, and it has been wowing tourists and locals ever since. Luckily, the cave is environmentally-protected by law at the insistence of Naica residents.

This lake is pretty Instagram-worthy. Las Coloradas (Pink Lake) is hidden at the top of the Yucatan Peninsula. It is colorful, and the water gets its cotton-candy shade from red colored algae, brine shrimp, and plankton. As the water evaporates, these organisms are more concentrated, leading to Las Coloradas’ unique shade. 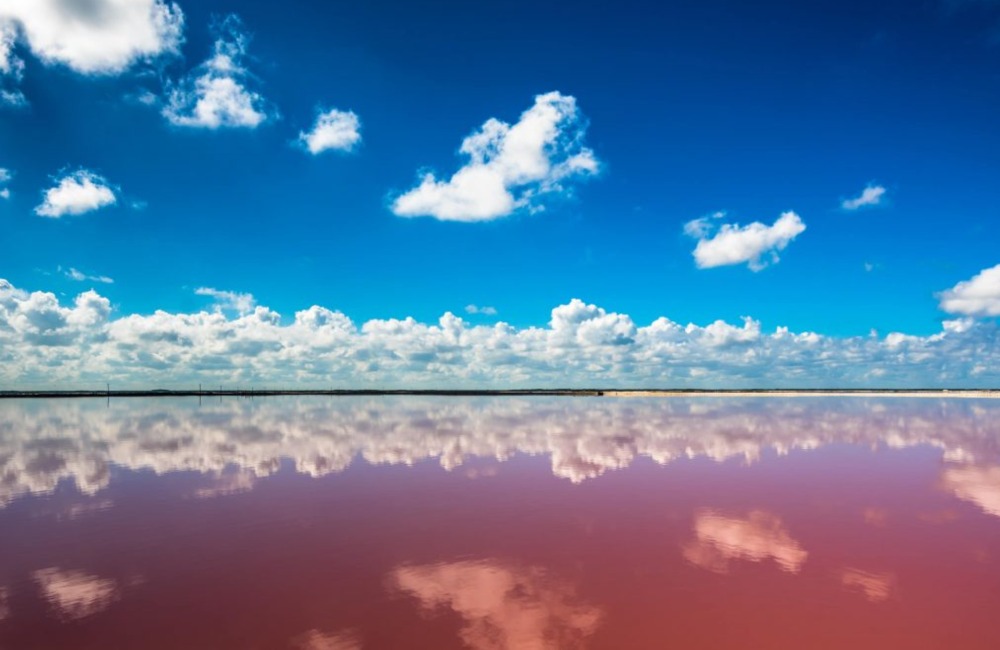 When it is sunny, you will see the most vibrant shade of pink. Las Coloradas is next to a tiny fishing village with just a thousand people. Las Coloradas, like the Giant Crystal Cave, is legally-protected, as it is part of Mexico’s Rio Lagartos Biosphere Reserve.

The Most Extravagant Celebrity Engagement Rings of All Time
Being an A-list celebrity with more money than sense can come with its perks. Lavish homes, fast cars, and of course, expensive jewelry. Some of the biggest names in the business have some of the biggest diamonds in the world. The more famous you are, the higher the carat count.  From Sony artists to royalty, […]
The Most Expensive Outfits Royals Have Worn
From the moment we are old enough to dream, we hear stories about princesses in towers, read books about princes riding on a white horse, and watch movies with magical pumpkins and glass slippers. Hearing about the real royal families is a way to keep that childhood magic alive.  The royal family are the epitome […]
These Hit TV And Movie Sets Are Abandoned – And Still Standing Today
Hollywood is the stuff of dreams, and where fantasies become a reality. We all grow up with the movies, dreaming of the Wild West, fantastical adventures, or being swept off our feet just like in the pictures. Parallel universes, dystopian worlds, or a thrilling chase after the bad guy. The only limit is our imagination. […]
Most Expensive Cars of the British Royal Family
The British Royal family has managed to amass quite the fortune over the years, but their net worth extends far beyond what King Charles III has in the bank. In fact, what he has in the garage is just as lucrative, too. The House of Windsor has always been fortunate enough to acquire and drive […]
Advertisement