Amusement parks are places of joy and happiness. Children are in their element and parents compare all future joys to the feelings they had as a kid in an amusement park. However, they don’t all stand the test of time. There are many closed down and abandoned amusement parks across the globe and they are rather less amusing.

From the creepy to the bizarre, abandoned amusement parks have an eeriness about them. They are a place in which joy once occurred but no longer does. There is a slightly dark fascination we have with these abandoned locations, and in this post, we take you to explore. Grab your popcorn and your coffee and let’s take this journey on the road.

Fun Spot Amusement park was not just a theme park but also a zoo. They even had white Bengal tigers, which today are considered endangered. They also had an array of rides, as well as a water park. 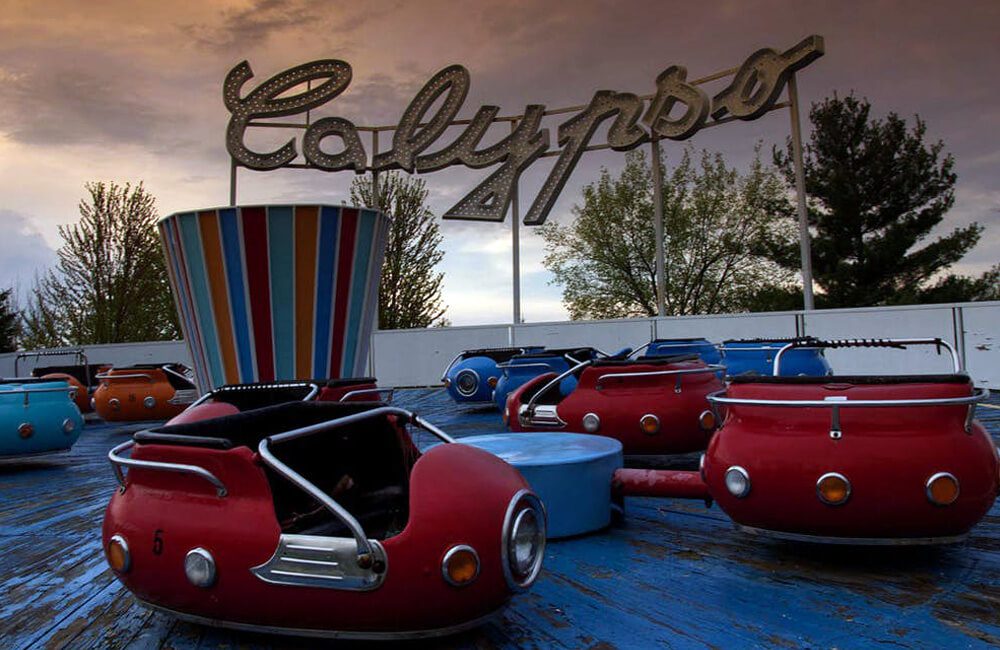 The park survived for over 50 years, though its demise was blamed on the economy back in 2008. Today the park is still closed but if you can find your way in you might be able to capture some snapshots of abandoned roller coasters, empty mirror rooms, and a place that was once the home of joy.

Located in Berlin, Germany, Spreepark opened its doors to the public in 1969. It was a large space of almost 30 hectares and was the only park of its kind in East and West Berlin. In 1991 the park management changed over to a new company and over the next few years, there were several changes made to the park. 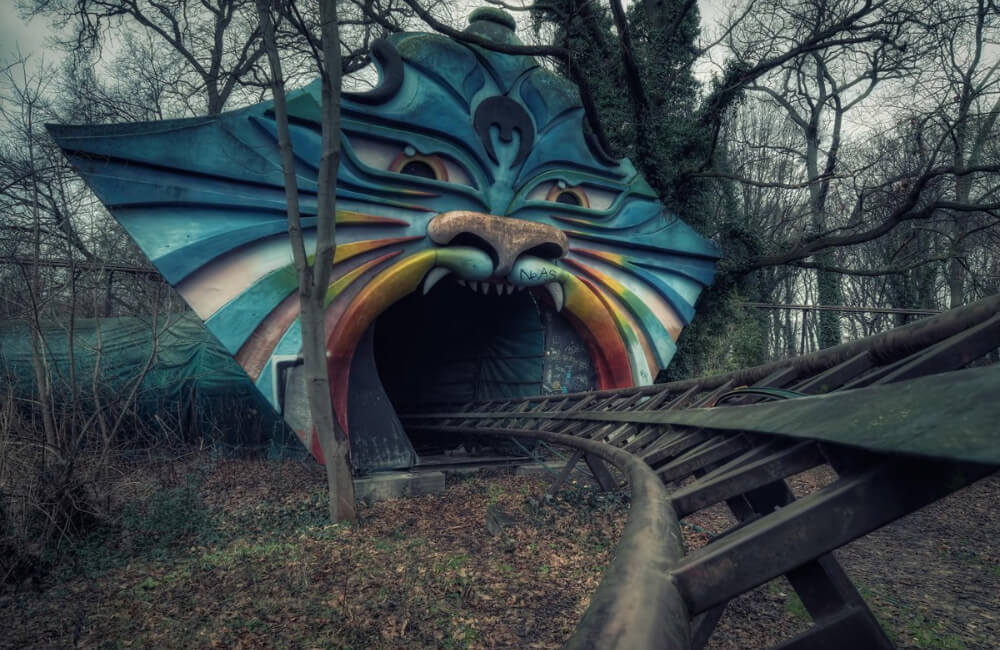 By 1999 the park was struggling financially. It was blamed on a lack of parking space for visitors as well as increased entrance fees. In 2001 there were a meager 400,000 visitors, compared to 1,5 million in previous years. Spreepark had no choice but to announce its insolvency with debts of €11,000,000.

Yongma Land was only open for 31 years before being closed down. Shortly after its opening, a larger and more attractive park opened nearby. The small park wasn’t able to make enough profits to maintain its running so they closed its doors to the public in 2011. 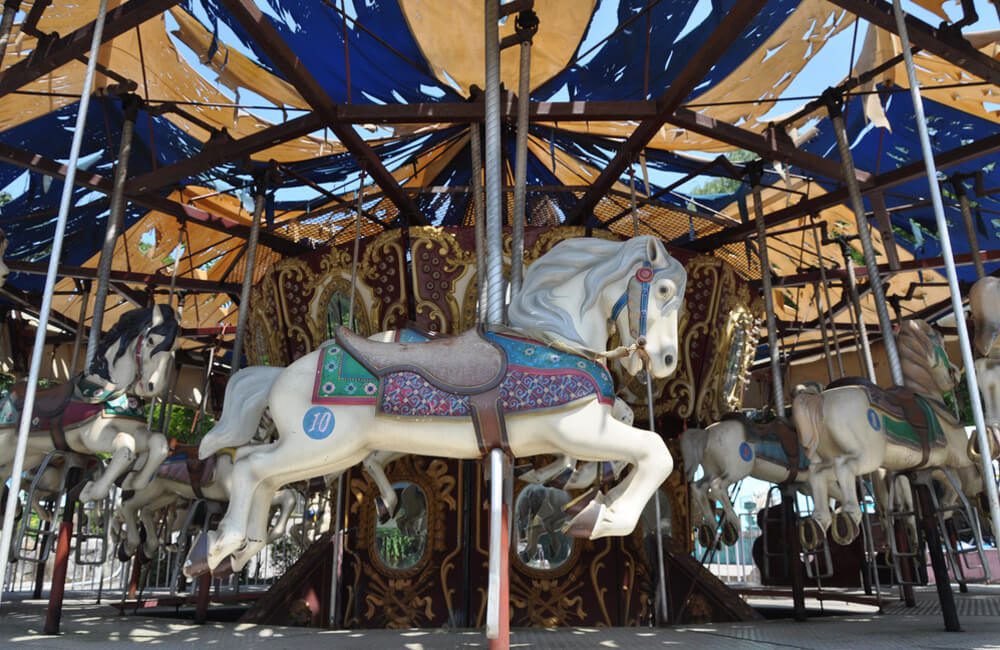 Since then, the park has still been available for hire if you are willing to fork out 10,000 won (equivalent to $8.75) per day. It has become a popular spot for filming, photoshoots, and cosplay events. If you ever find yourself in the area, grab your Harley Quinn costume and check it out!

Ho Thuy Tien water park in Vietnam is a haunting, abandoned water park that was built back in 2001 with a large budget of $3 million. The overgrown environment makes for a somewhat creepy attraction that has been decorated with graffiti over the years by the many visitors attending the park. 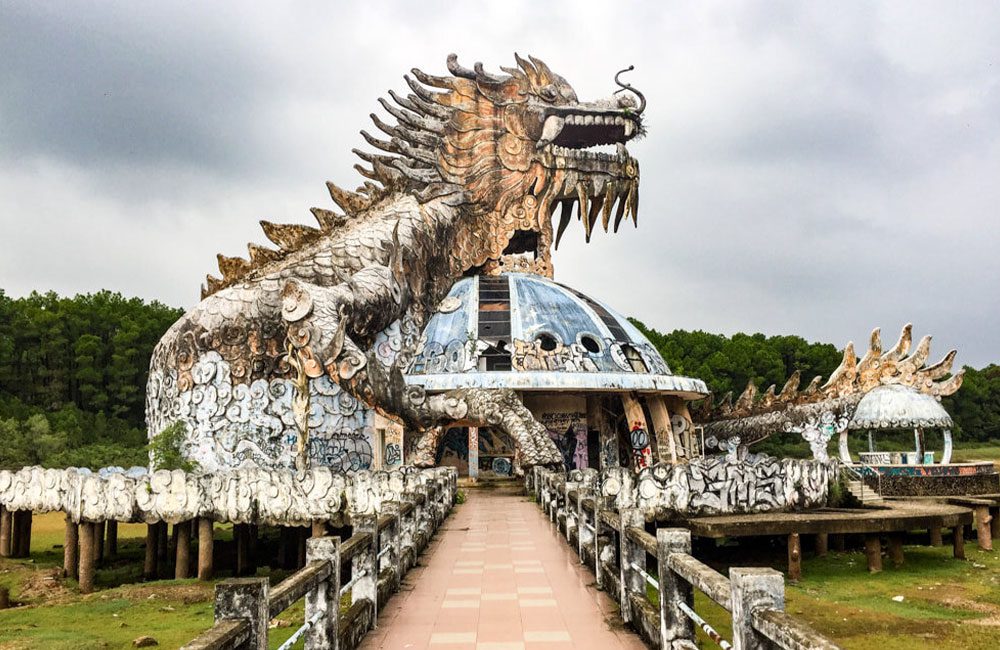 Unfortunately, when they opened in 2004, the general public was less excited than they had anticipated and the park had to close down. Today there are rumors of crocodiles living in the park and backpackers flock to the location to take pictures and add their contribution to the graffitied walls.

This Florida amusement park was at its peak from the 1960s to the 1980s as Panama City Beach grew more and more popular amongst tourists. The park grew in size and many new rides were added throughout the years, including a ride called Dante’s inferno which involved entering the mouth of the devil as well as a haunted castle. 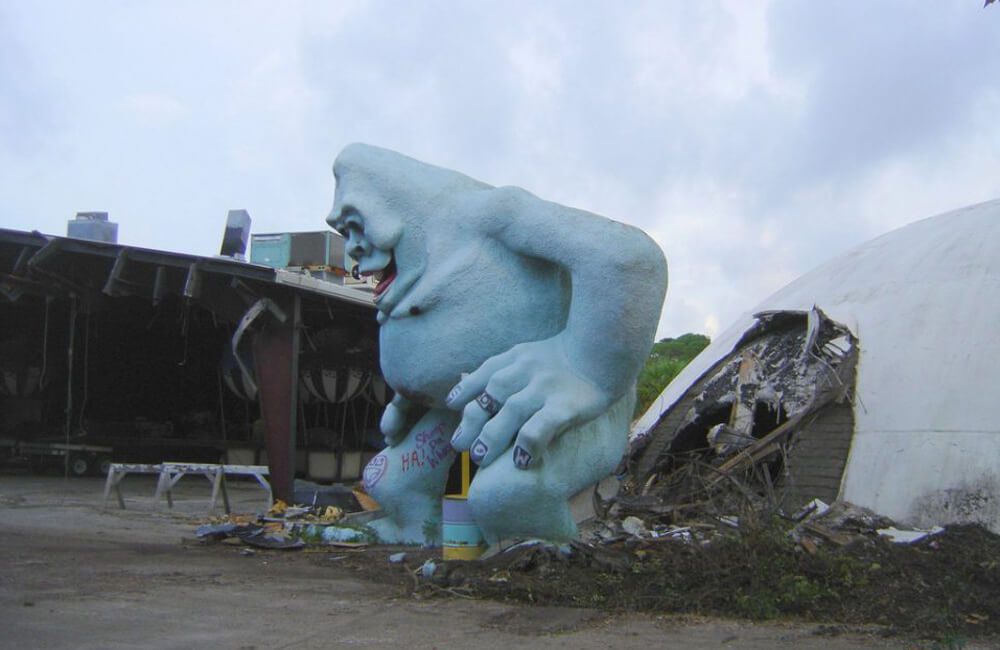 Unfortunately, in 2004 it was announced that the beloved park was closing. The owner had sold the land which was to be used to develop condos. He had blamed the financial loss on the move, saying that tourists no longer seemed interested in a theme park.

Wonderland was over before it even began, as it was never opened to the public. Located in Chenzhuang Village in China, it was on its way to being the biggest theme park in Asia at a massive 120 acres. By 1998 construction had come to a halt, due to financial issues with local officials. A later attempt to revive the premises was also abandoned in 2008. 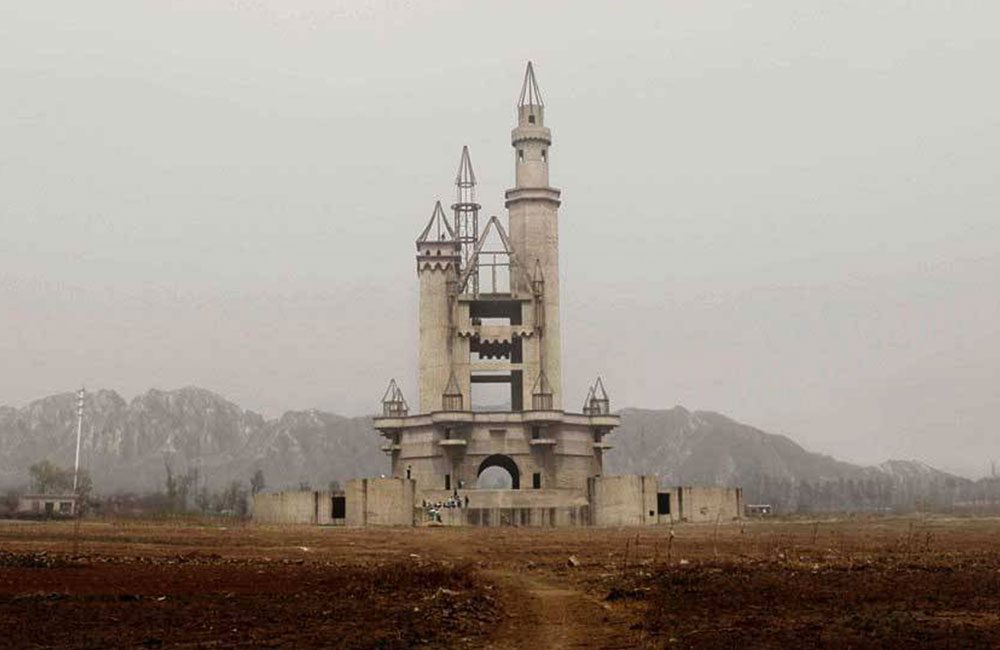 The site was a major attraction for tourists who flocked to the large, abandoned site to admire the castles and medieval-themed buildings. Fast forward to 2013 when the site was finally demolished with plans to build a large shopping mall.

Land of Oz is a Wizard of Oz theme park in North Carolina. The grand opening was held in 1970 and offered tours and interactive experiences in which the guests were made to feel like Dorothy herself on her adventure quest down the yellow brick road. This involved a tornado and of course all the colorful characters in the story along the way. 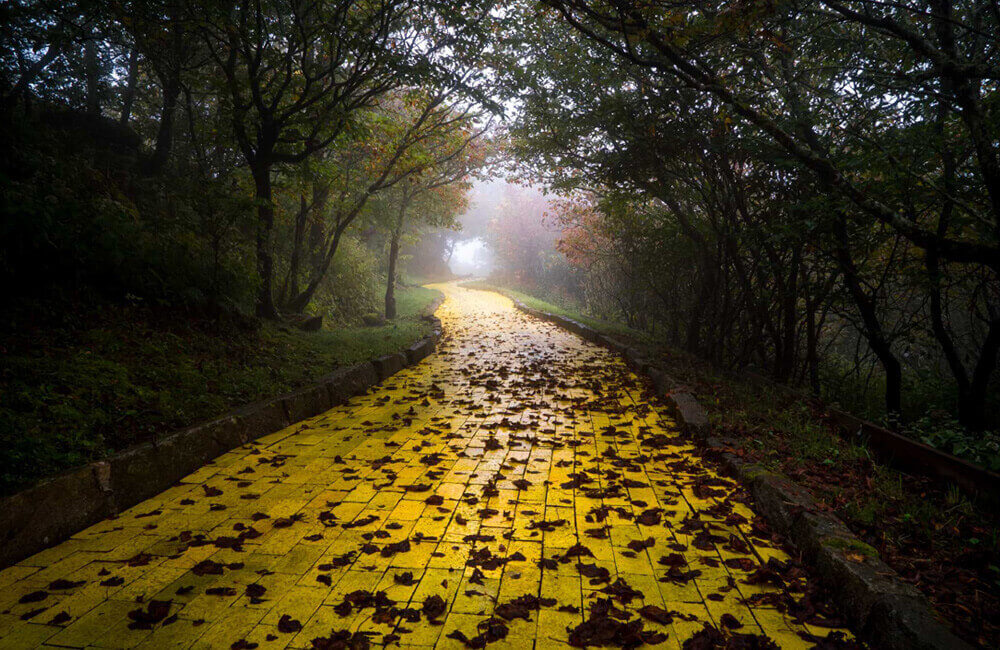 In 1991 a fire broke out in the amphitheater. It is still unknown what caused the fire but some speculate that it may have been employees who started it. Two entire buildings went down in flames, including all of the props and outfits. For many years the park was closed, though they did open from time to time for events. Today, it is open again and can be visited on Friday for tours.

This Wild West theme park is located in Maggie Valley in North Carolina. Visitors had to ascend a mountain via chair lift in order to attend the park, making it rather unusual! The original cost of construction was $1 million back in 1960 and it was all built by about two hundred locals. 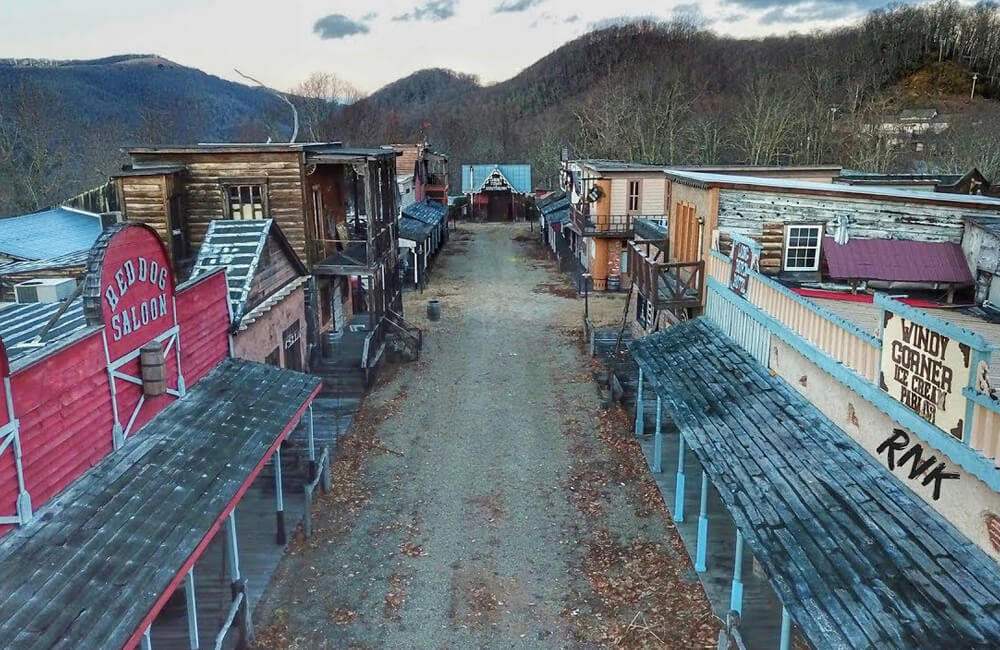 It quickly became one of the most popular destinations for thrill-seekers and holidaymakers, attracting around 600,000 visitors per year. Despite their popularity, poor management and upkeep resulted in a major decline in visitors leading to their eventual close in 2002. Today it looks like an abandoned scene from a Western film that certainly captures the imagination.

This massive theme park in Bali, Indonesia was set to be one of the biggest attractions in the region. Due to unclear reasons though, the park never actually opened its doors. The reasons behind this must have been significant as the park cost $100 million to build. 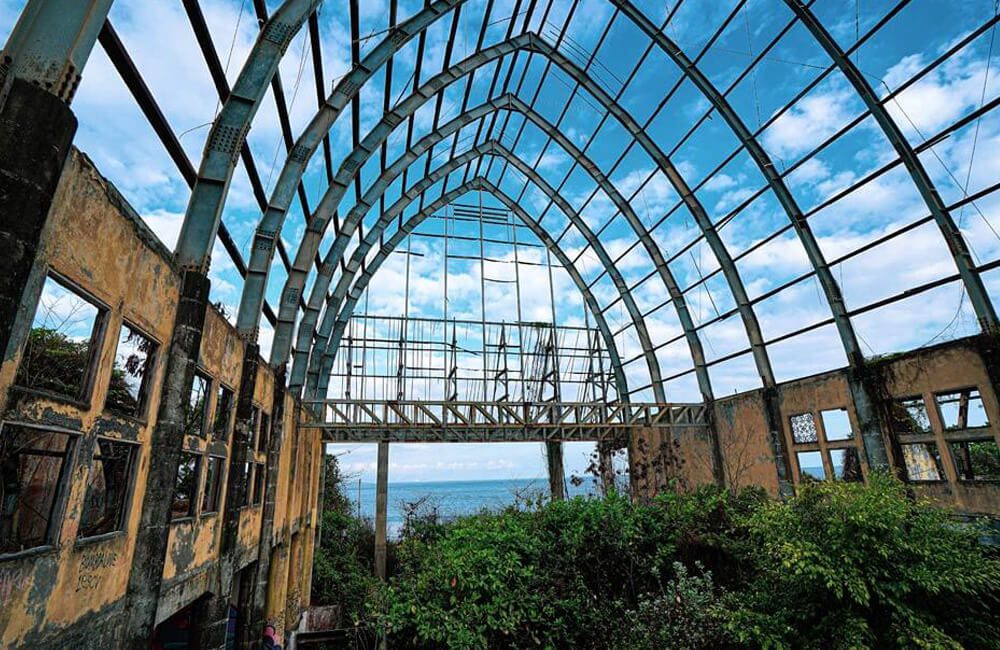 Some say it had to do with land disputes, others say it was due to financial shortages. There is also a legend that says that the park was struck by lightning on Friday 13th in 1998 which allegedly caused such severe damage that insurance wouldn’t cover the damage. Whatever the reason, today the park stands empty and is a haunting reminder of what could have been.

The Enchanted Forest Playland in Toledo, Ohio was opened by R.W. Bishop who had accumulated rides from traveling to different theme parks across the country. His wish was to build a theme park in his backyard, which he realized back in 1995. 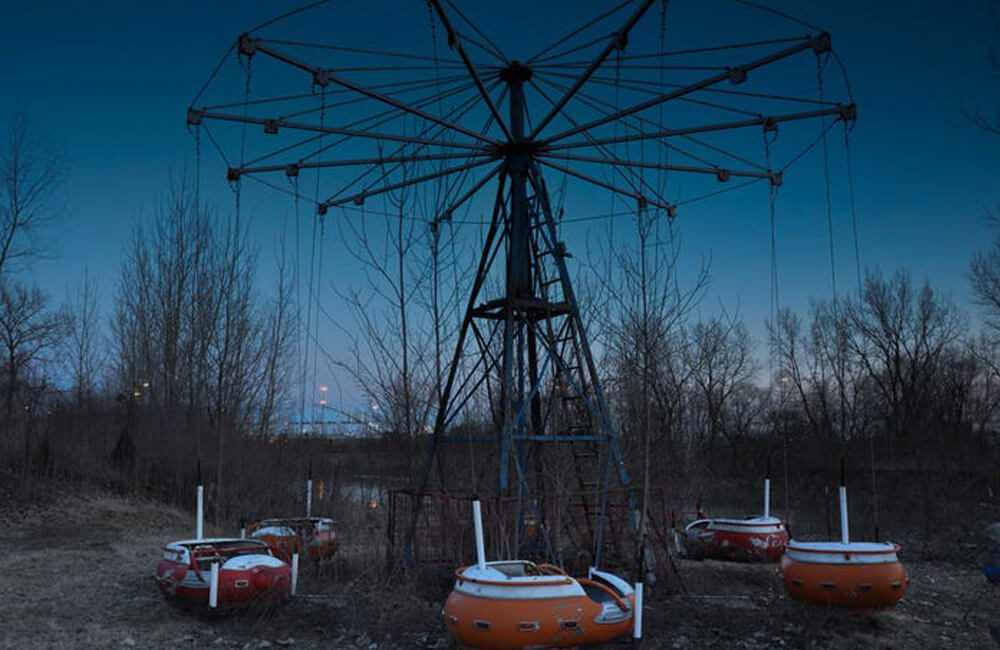 Unfortunately for him, his dream was short-lived. The park closed down just five years later and today all that remains are overgrown rides and images of welcome signs and smiling clowns that are haunting and eerie. One has to admire Mr. Bishop, despite the fact that the park didn’t last very long it is rather admirable that he opened it up in his backyard in the first place!

The image of this roller coaster submerged in the ocean is so striking. Truly the stuff of nightmares, and when you hear the story behind it, it doesn’t make it any less unsettling. This amusement park was originally opened in 1932 in New Jersey. Seaside Heights attracted tourists from across the US and was full of great, family activities. 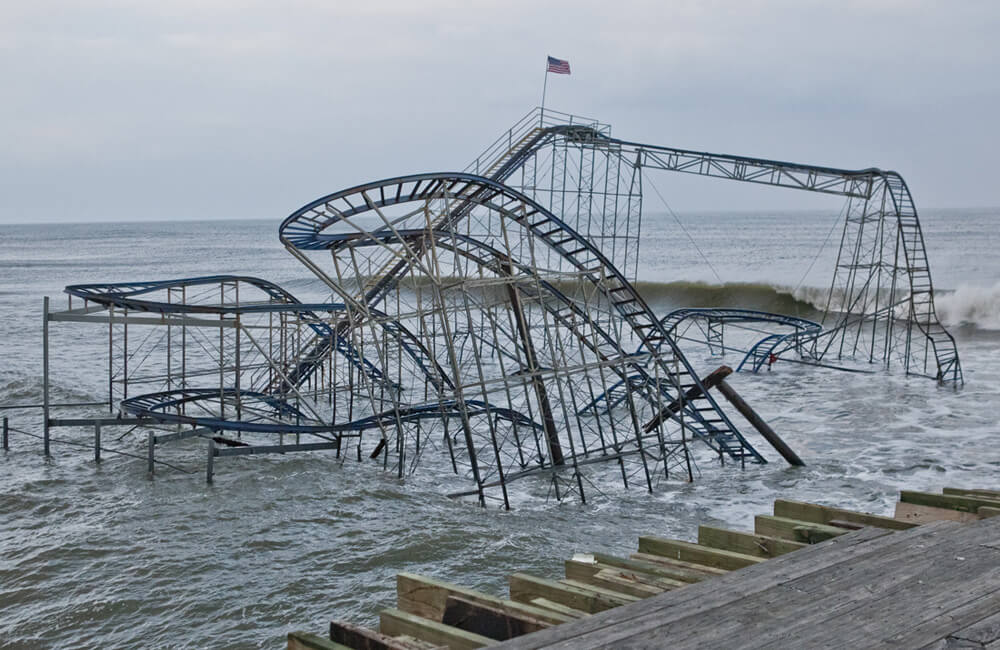 Then, in 2012, Hurricane Sandy hit. The destruction was devastating and many parts of the park have never reopened, including the Star Jet roller coaster which we see pictured here. In 2013, the pier reopened with limited rides which were followed by an expansion in 2017. Today the pier is open and features some new and exciting rides, but its stormy past won’t be forgotten.

It’s hard to believe that this theme park was open for 120 years. Opened in 1887, its first ride was a steam-powered carousel. More rides were built over the years and of course, in its 120-year history, there were many changes of hands and new rides introduced. At its peak, there were up to 2.7 visitors in 2001, but by 2004 that number declined to 700,000. 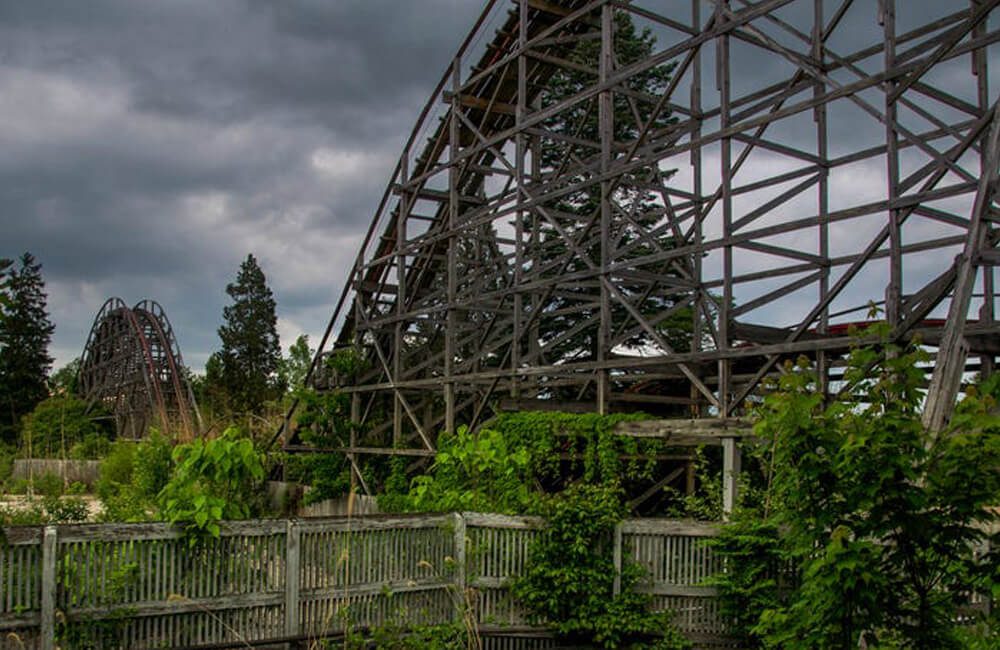 Eventually, the park closed in 2007 due to a decline, and in 2007 the land was sold for development. However, the water park continued to operate but later on it also shut. By 2020 the land had all been sold for about $2 million with plans to build and develop restaurants, homes, and retail stores.

The Ferris Wheel is often portrayed in films as a place of young romance, childhood joy, and fun. Unfortunately in Pripyat, Ukraine, this abandoned Ferris wheel is a symbol of the Chernobyl disaster and just one of the many unfortunate victims. 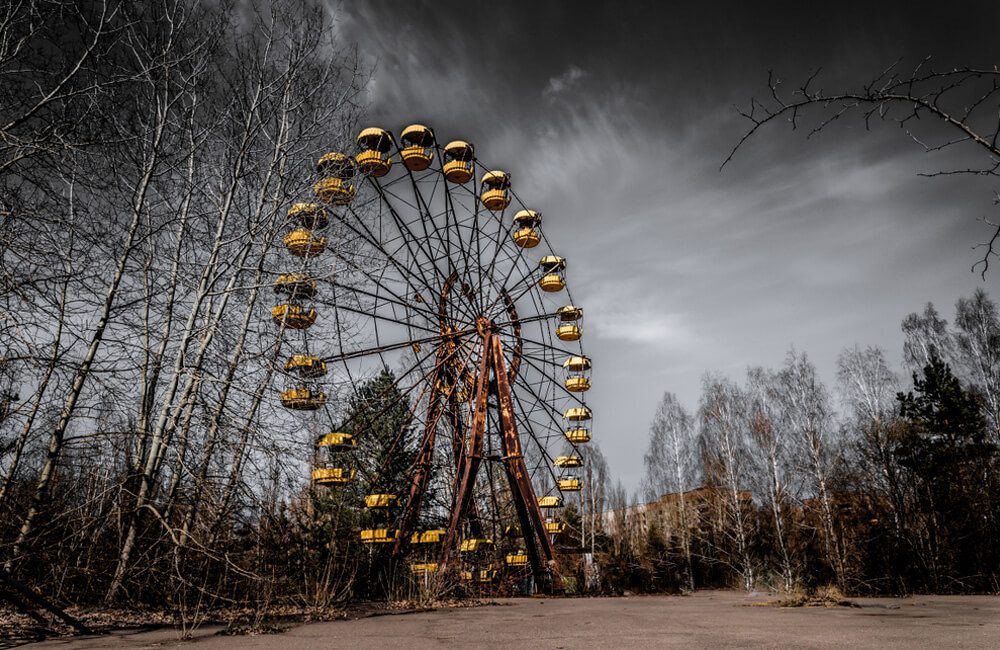 The Pripyat amusement park was to celebrate its opening in May 1986. Unfortunately, this never happened as, by April, disaster had struck. In fact, some of the rides were not yet complete, with missing cladding on the Ferris wheel. Today, the wheel towers above the trees as a haunting reminder of what occurred in the ’80s in Ukraine.

Nara Dreamland in Japan was built with the iconic Disneyland as inspiration. Initially Disney was involved with the development of the theme park but eventually, they backed out due to a licensing disagreement over the Disney characters. The creators of Nara Dreamland went on to create their own characters for their park.

By 1979 Tokyo Disneyland opened its doors and was direct competition for Nara Dreamland. This was followed by a slow decline in visitors and eventually resulted in the park’s closure. Demolition only began ten years later, in 2016. Until that point, the park sat abandoned and became a popular destination for backpackers and youths.