Advertising can make or break a brand’s image. Marketing that follows current trends and truly knows how to appeal to an audience can greatly impact the popularity of certain brands; failure to do so can run them into irrelevance or infamy.

Worse still, even the most expensive campaigns can fall under the radar, which is becoming more common in the era of sassy Twitter accounts and viral memes. These companies are perfect examples of how to leave an impression, utilizing creativity to create unique ad placements that people still talk about today.

Fields of sheep and cattle are a common sight for passengers on trains in the UK, so much so that The Train Line, a train ticket-purchasing company, made the bold choice to utilize the views from their routes for marketing. Partnering with a local farmer, The Train Line produced shawls for a flock of sheep advertising their sheep prices and discounts. 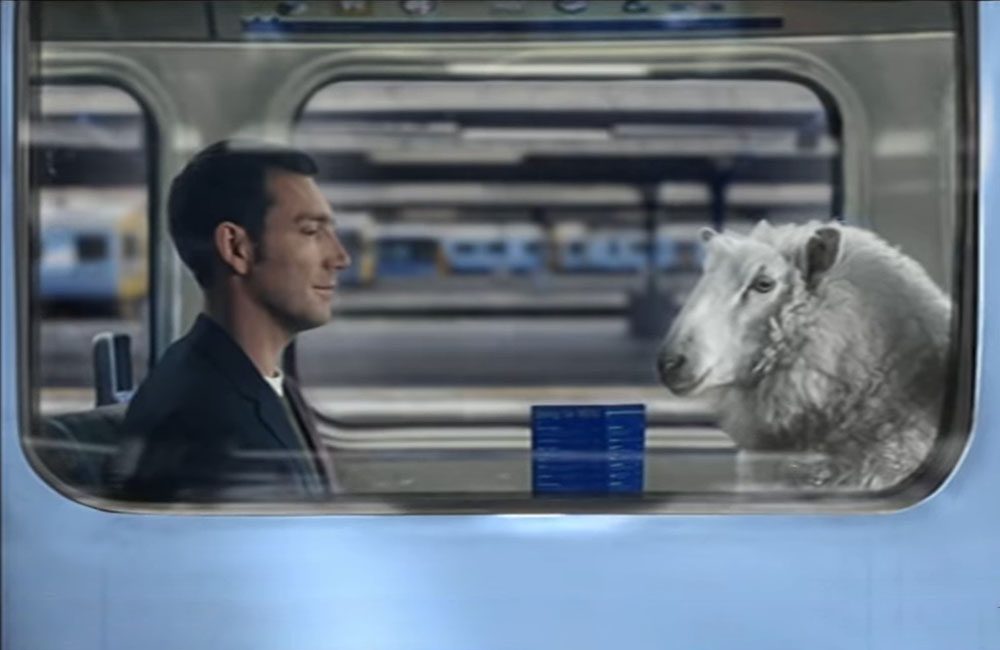 The flock they employed for their campaign is visible from the route to Gatwick Airport, one of the busiest train lines in the UK. To promote the campaign further, posters and television adverts of the flock were broadcast on British television and shown in stations around the country.

This controversial marketing campaign by mobile-advertising company Adzookie did more than put their name into the spotlight of advertising; it started a conversation around how many American families are so desperate to make ends meet, they’ll allow companies to advertise on the walls of their house. 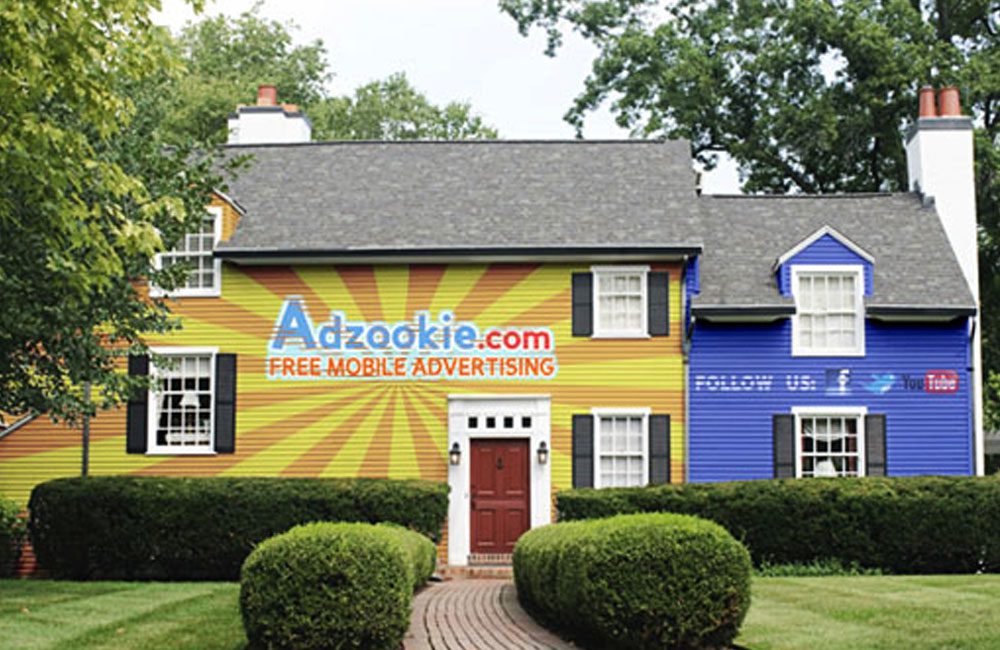 In exchange for allowing them to paint a bold, bright advertisement on the front of their house, Adzookie promised to pay the mortgages of willing homeowners as long as their marketing was visible on the house. This attracted a number of inquiries from those eager to have the pressure of their mortgages out of their bank accounts, while many criticized the campaign for being predatory and intrusive.

Manholes are undoubtedly one of the least attractive parts of New York City and sadly unavoidable if you want to explore the bright lights and excitement of areas such as Times Square. However, this marketing campaign came up with a simple but unique form of advertising that turned manholes into an attraction. 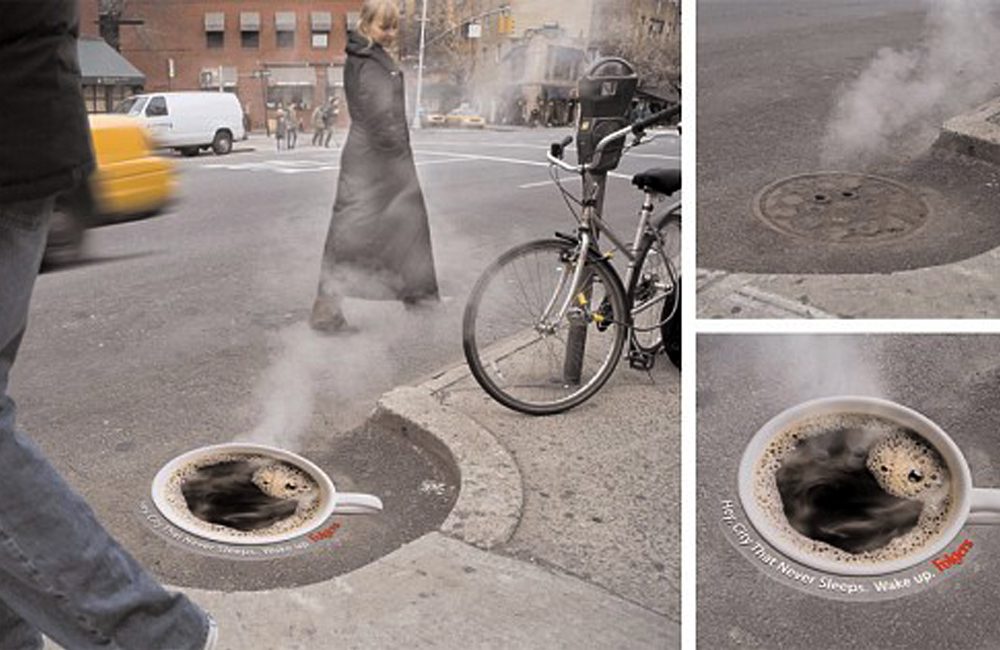 Putting a creative spin on advertising their range of coffee, Folgers had vinyl stickers of cups of coffee printed and stuck to manhole covers all over New York. They left out ventilation holes for the steam to escape through, giving the effect of a steaming cup of coffee. It didn’t smell quite as good, but this inventive use of manholes definitely caught the attention of passersby.

CBS is the home of so many well-loved TV shows that you’d think they wouldn’t feel the need to take any drastic advertising measures. Well, this marketing campaign was so original that it resulted in the creation of a new word: “egg-vertizing.” To promote the upcoming seasons of some of their most popular shows, CBS printed advertisements on over 30 million individual eggs. While some thought this was funny, albeit a little over the top, many people took issue with this method of advertising. A lot of people complained that having their literal food containing advertisements felt invasive, and the campaign ended after a single run. However, it was talked about enough to still be remembered to this day.

Although intentions for this campaign were pure, the imagery it created fuelled nightmares for pizza lovers for months. To advertise their new Colgate Max Night, Colgate partnered with pizza box manufacturers to release their product to the masses. Instead of just printing a simple advertisement on the box, they took things a step further by printing a full, detailed image of a mouth on the inside of the box. 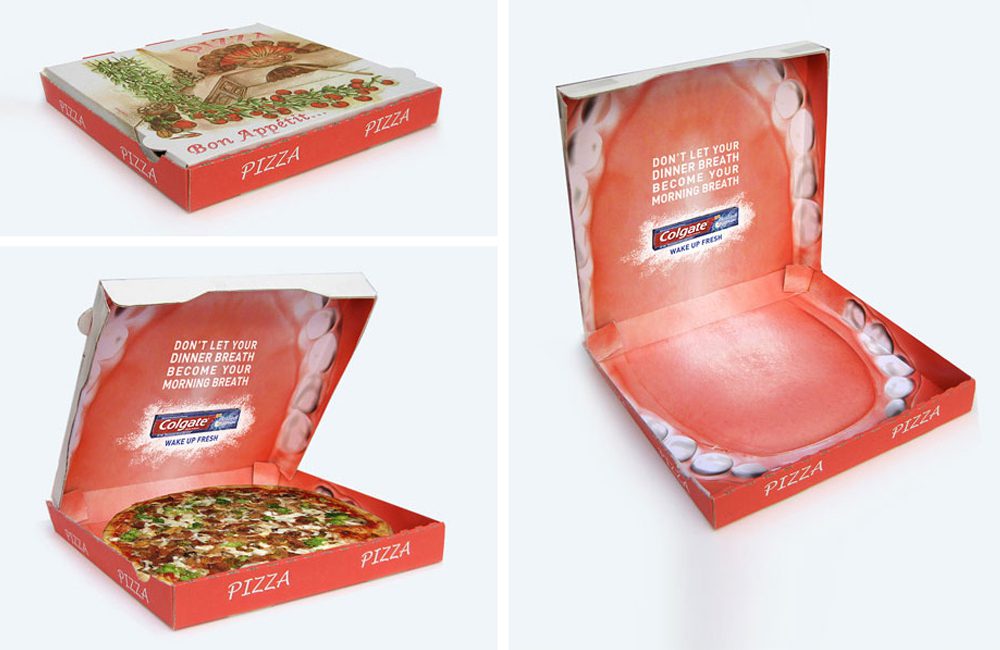 Inside A Mouth @xuannelgonzali / Pinterest.com

This meant when the boxes were opened, it looked like your delicious pizza was sitting on someone’s tongue. Not the most appetizing thing in the world, to say the least. Although this definitely got people talking about Colgate, it’s hard to say if it was for the right reasons.

This Bic promotion from Japan is a prime example of how guerilla marketing is done. Guerilla marketing is a type of advertisement designed to surprise the public by using unconventional design and placement. It’s a less common method of marketing, as it usually requires more work than the average billboard and can cost three times as much. 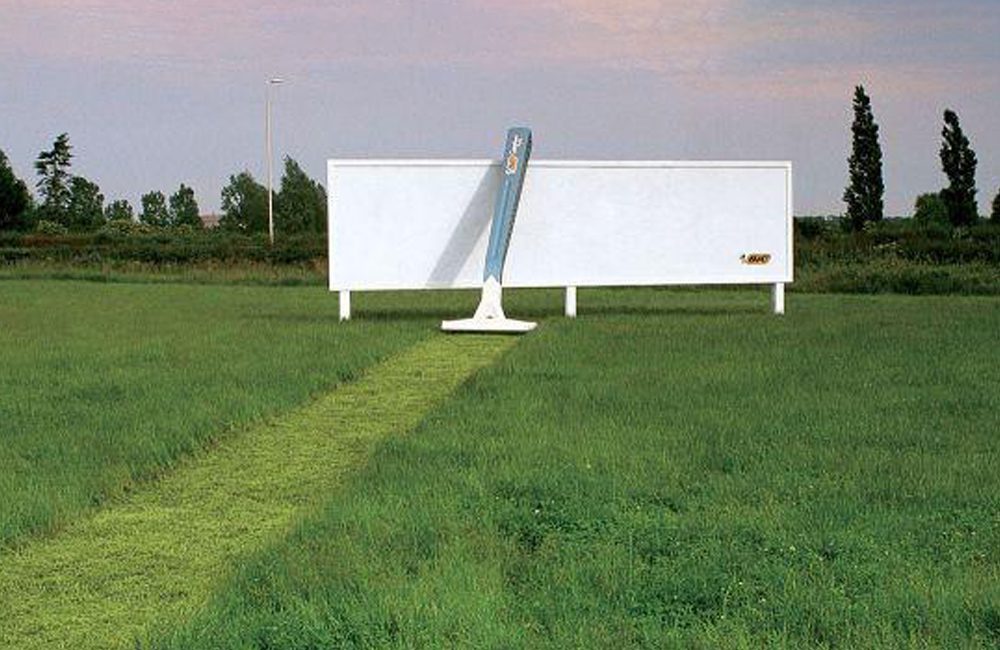 Bic carefully scouted their location for this billboard and committed to maintaining the streak of short grass for several months to maintain the effect of the advertisement. They were praised for their creative take on a razor advertisement, a market that often struggles with unique marketing concepts.

In 2005, Karolyne Smith earned the nickname “Forehead Goldie” after GoldPalace.com, an online casino, legally purchased her forehead as an advertising space, resulting in this questionable tattoo. Smith auctioned her forehead on eBay for $10,000, intending to use the money to privately educate her son. Reports alleged that the artist who performed the tattoo tried to talk Smith out of it for 7 hours. 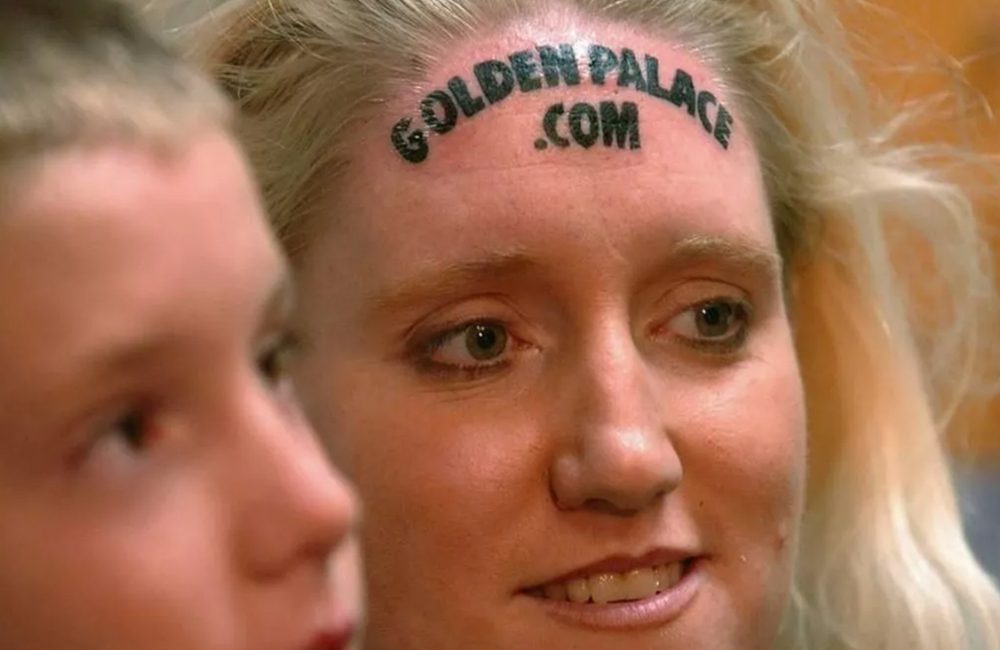 While this whirlwind of a story did attract more attention to GoldenPalace.com, the same can’t be said for Smith. The money reportedly ran out quickly, and she had to move back into her father’s house as she was unable to make ends meet. Until 2012, Smith adamantly claimed she didn’t regret the tattoo; the casino has since provided her with the funds to remove the tattoo.

You never have to look far to find a McDonald’s advertisement, whether it be a billboard or even sportswear. Despite being the biggest fast-food empire in the world, McDonald’s is still known to put effort into its marketing campaigns to maintain its image as a family-friendly restaurant. 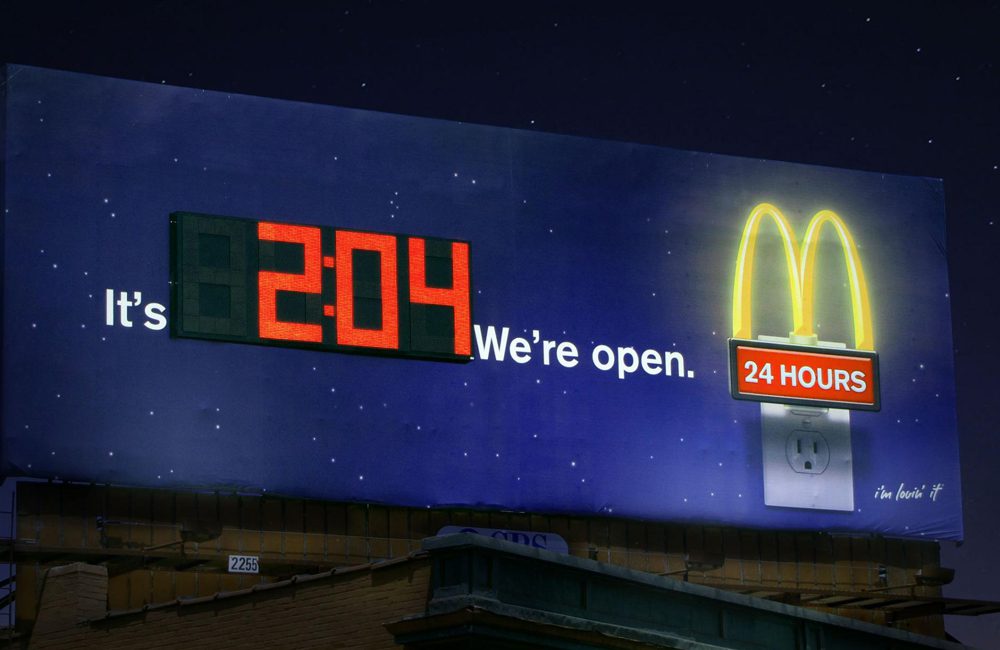 However, a large portion of their customer breaks are adults on the go, often traveling huge distances at insane hours. When McDonald’s introduced their 24-hour restaurants, they made sure to market the people who needed them most. This billboard, placed by a highway, was the perfect tool to convince late-night and early-morning drivers they needed a coffee or a breakfast muffin.

The 2004 science-fiction disaster movie The Day After Tomorrow was one of the biggest movies of the year, attracting attention with its worryingly plausible plot, all-star cast, and clever marketing. The movie tells the tale of several people across the world surviving a new Ice Age as a result of global warming. 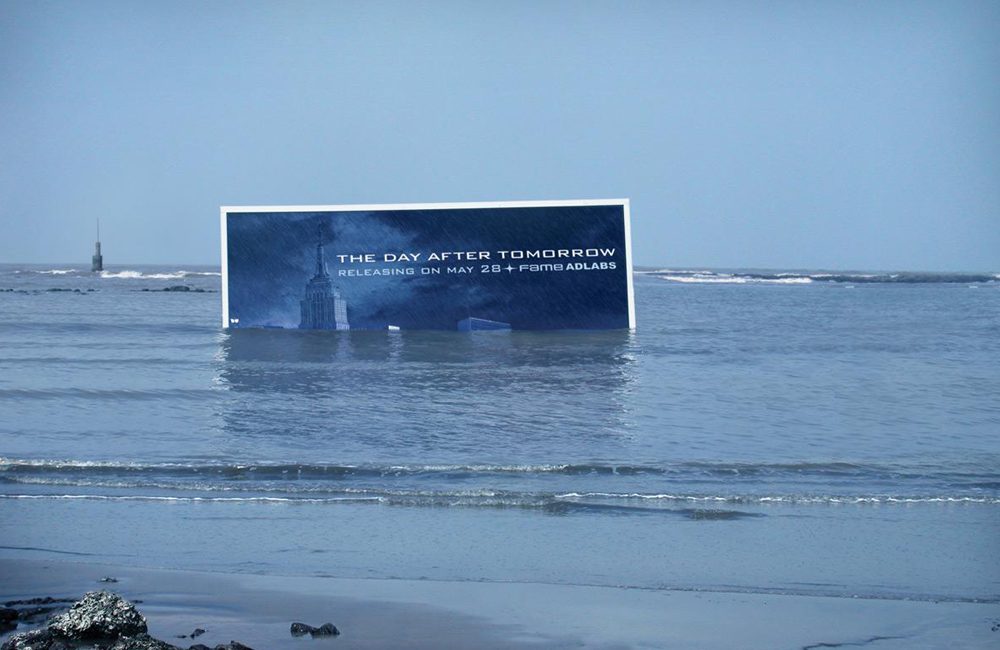 One of the most impacted regions is New York City, which is hit by a giant tsunami, leaving a large portion of the city underwater. Fame Adlabs was hired to create this guerilla marketing piece for the film by placing a giant billboard just off the coast of a beach, playing to the themes of a city being submerged underwater.

After their “Gorilla” TV advertisement went viral across the world, Cadbury had a hard time trying to pull off another marketing scheme that would be just as successful. As well as producing other TV adverts, such as “Eyebrows,” Cadbury decided to expand their marketing ideas to interactive billboards. 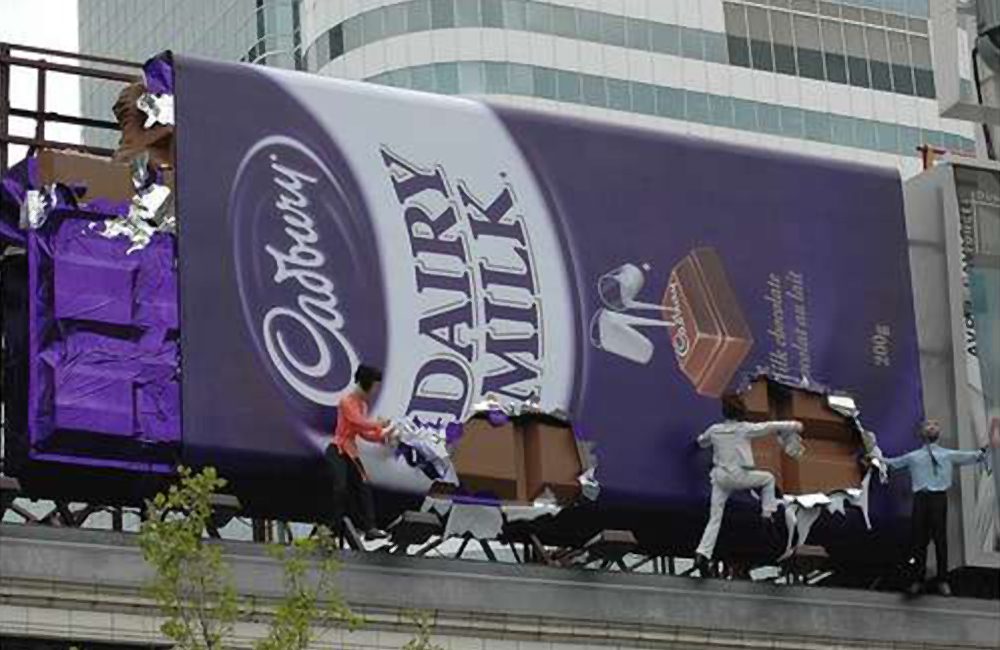 In the UK’s biggest cities, billboards were adorned with giant bars of their iconic Cadbury Milk Chocolate Bars. But that wasn’t all, as every day, the foil on the 3D billboard would be pulled back a little further, and a piece of the fake chocolate would appear bitten off until the billboard eventually disappeared. This garnered national attention, especially from those who passed the billboard daily and saw the gradual change, which many found amusing and on-brand with Cadbury’s comedic marketing schemes.

Winter is one of the hardest times of year for homeless individuals across the world, many of whom lose their lives due to freezing temperatures and a lack of warm, dry shelter. In 2004, Salvation Army released this marketing campaign that doubled as protection against the weather for the homeless. 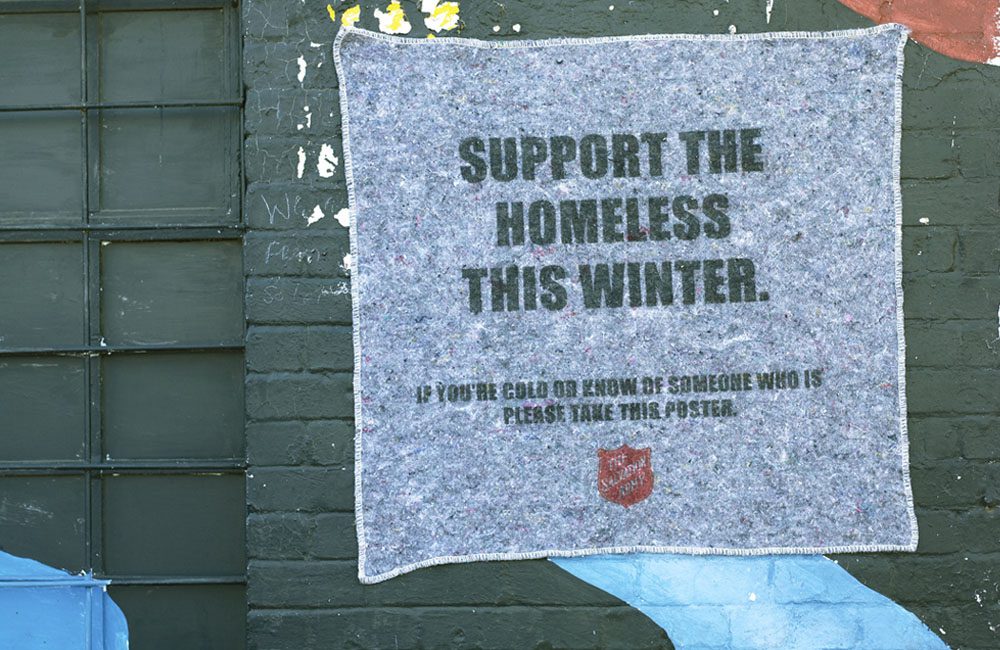 These posters doubled as blankets, and passersby were encouraged to remove the blankets and give them to people struggling to stay warm as winter approached. Although this was designed to benefit the homeless, Salvation Army did receive some backlash for essentially using a necessity to keep homeless people alive as an opportunity to promote themselves.

It’s difficult to say if this billboard can even be considered an advertisement, rather a work of art. Created by Lead Pencil Studio of Seattle, “Non-Sign II” was constructed over several months at the border between the US and Canada. Constructed out of stainless steel rods, this empty-space billboard was designed to promote the landscape of Peach Arch Land Port, a stark contrast to the dozens of promotional billboards in the area. 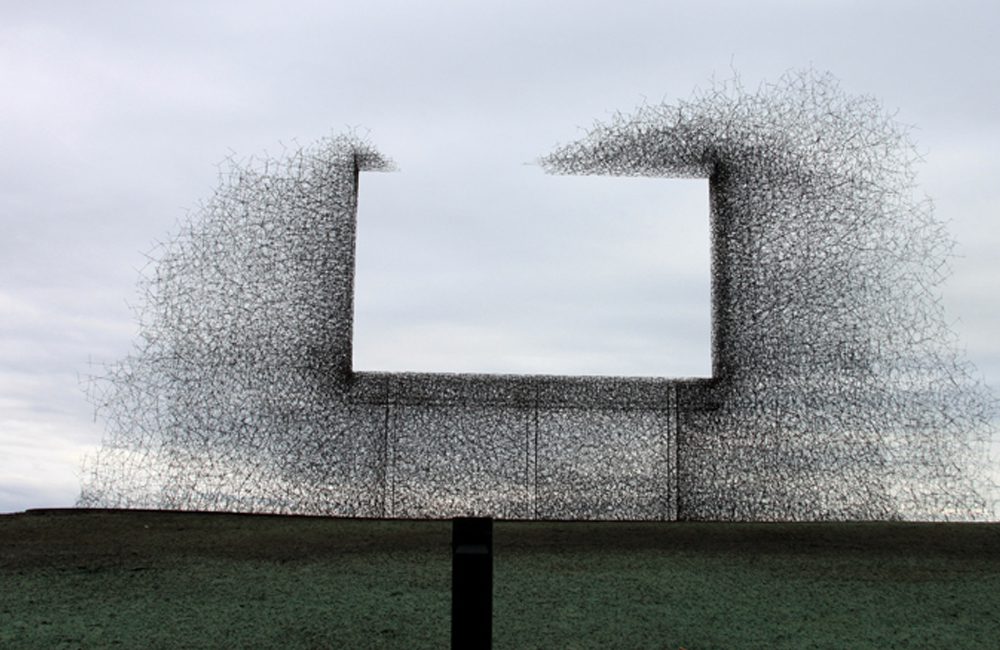 The billboard designers wanted people to do a double-take and capture their genuine interest rather than promote a product or service to them in passing. Their main focus was promoting clean air and examining how disruptive advertising can be to such beautiful landscapes.

It’s unsurprising that an empire as huge as Disney would choose to promote its own brand on its own aircraft. Created in partnership with Alaska Airlines, the Spirit of Disneyland II aircraft was designed to bring Disney magic to the first leg of the journey to one of their Disneyland Resorts. Adorned with images of Mickey and Minnie Mouse, Donald Duck, Goofy, and other iconic Disney characters, the bright and bold design of this Boeing 737-900 aircraft is more than enough to get young families excited for their Disneyland vacations, as well as promote to other passengers at airports headed to different destinations.

Everyone knows McDonald’s for their big, glowing “M” sign situated outside their restaurants, so when they switched tactics and created this new 3D sign, many were worried it wouldn’t have the same impact. This sign was designed and constructed by the ad agency Leo Burnett, who was brought on board to better promote the McDonald’s breakfast menu. 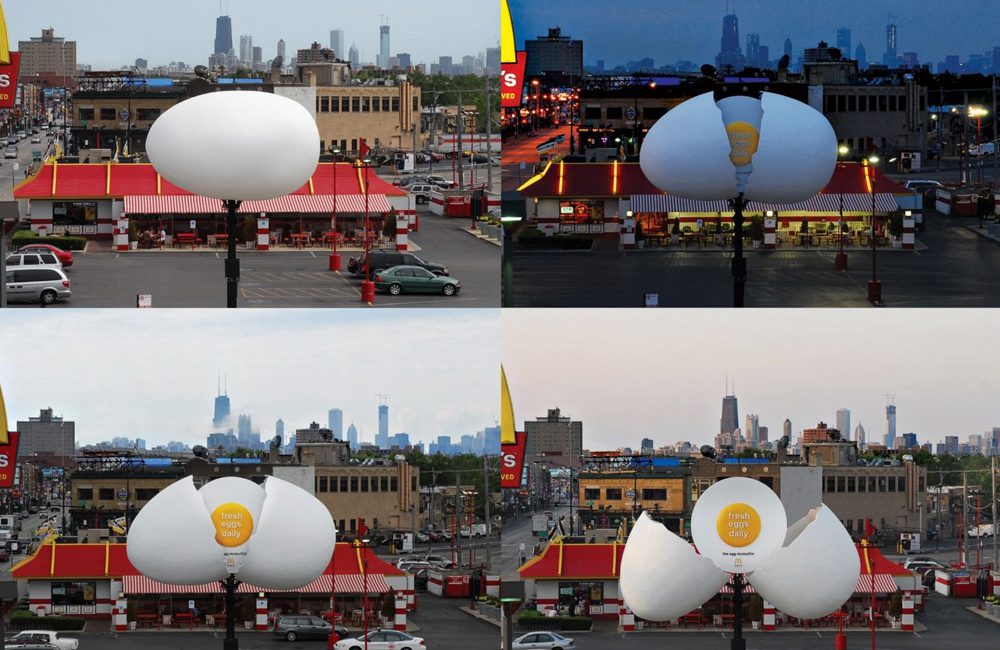 The most interesting part about this giant egg sign is that it’s motorized and operates in a specific time frame. At 6am the egg begins to “crack” and slowly opens until 10:30 am, when McDonald’s concludes their breakfast operations. The egg then stays closed for the rest of the day, and the cycle begins again the next morning.

Advertisement
Groundbreaking New Medical Treatments Coming in 2022
The ever-evolving world of medicine has seen a tremendous amount of improvement over the past century. It has only been the last decade or two, that we have begun to see the path forward for many treatments that have previously hit seemingly insurmountable obstacles. From the eradication of a centuries old infectious disease to rapid […]
Millionaires Who Live in Surprisingly Small, Modest Homes
In the past few months we’ve had a look at some of the most expensive penthouses in the world and a few of the incredible homes that celebrities have around the world, but what about the celebrities that don’t spend all of their money on luxuriously over-sized houses? Where do they live? Maybe they live […]
Airbnbs Designed by Actors That Anyone Can Rent
Airbnb has been steadily taking over the hospitality industry for a few years now, making super hosts out of those with property to spare (and making the company founders a fortune.) There are so many properties to choose from it can be hard to pick – but did you know that you could stay in […]
Incredible Spy Gadgets You Can Buy in Real Life
Watching movies like James Bond, Mission Impossible, and Austin Powers, has helped open our eyes to a few of the spy gadgets that, most people, didn’t know existed in real life. After all, if a filmmaker has thought of an idea for spy gear, there’s a good chance that, at least, one government agency in […]
Advertisement