Jay Leno was on the air for decades as one of our favorite late-night talk show hosts. One thing you might not know about Leno is that he is an avid car collector. His net worth is $350 million, and he spends a sizable fraction of that on expensive, rare, and collector cars. He has even teamed up with automakers to make his own specialized vehicles.

Leno’s 136-car collection was valued at $50 million recently, and it’s likely to increase in price as the years go on. He has vehicles that the average car collector can only dream about, and his collection is constantly growing and changing. On this list, you’ll see some of the coolest cars in his garage.

Jay Leno is one of the few people in the world who owns an exact copy of the Bugatti Type 57SC Atlantic. His replica was made by a German car enthusiast who specializes in making identical copies of antique, rare cars. The 1937 Bugatti Type 57 SC’s Competition variation was called “Aerolithe,” which is based on the Greek word for “meteor.” 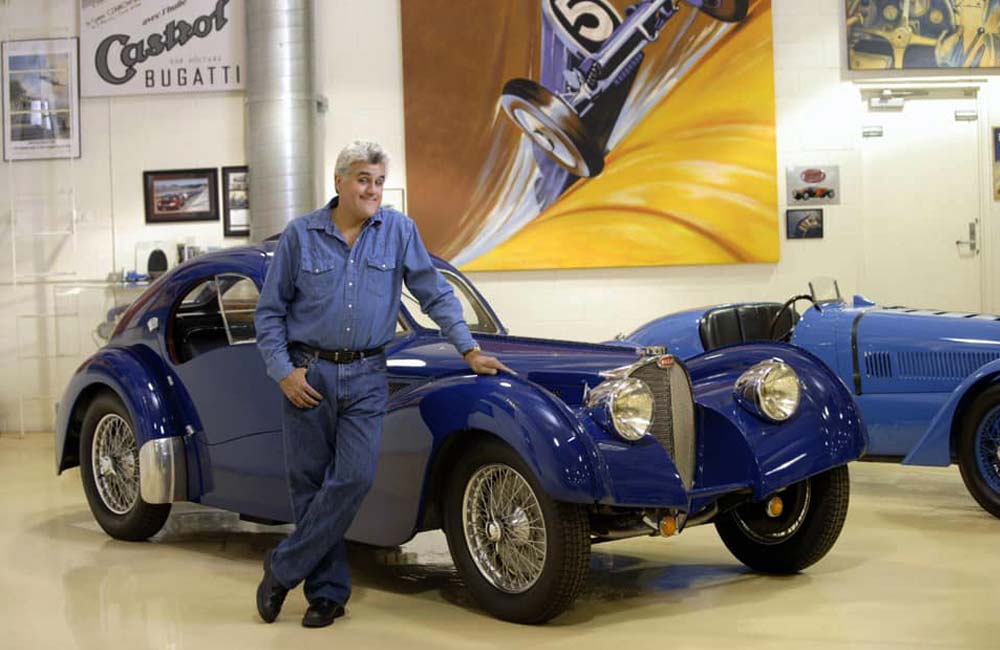 The 1937 Bugatti Type 57 SC was the first model year for the Type 57 SC, which would go on to have just 96 produced. Under the hood was a 3.257-liter DOHC Inline 8 engine. The designer was Jean Bugatti himself.

Back in 2017, Leno was asked which of his collection was his favorite, and he said that his 1994 McLaren F1 was the crown jewel of his collection. This car was valued at $12 million when he bought it, and the price has nearly doubled, with one ’94 McLaren selling for $23 million at auction. 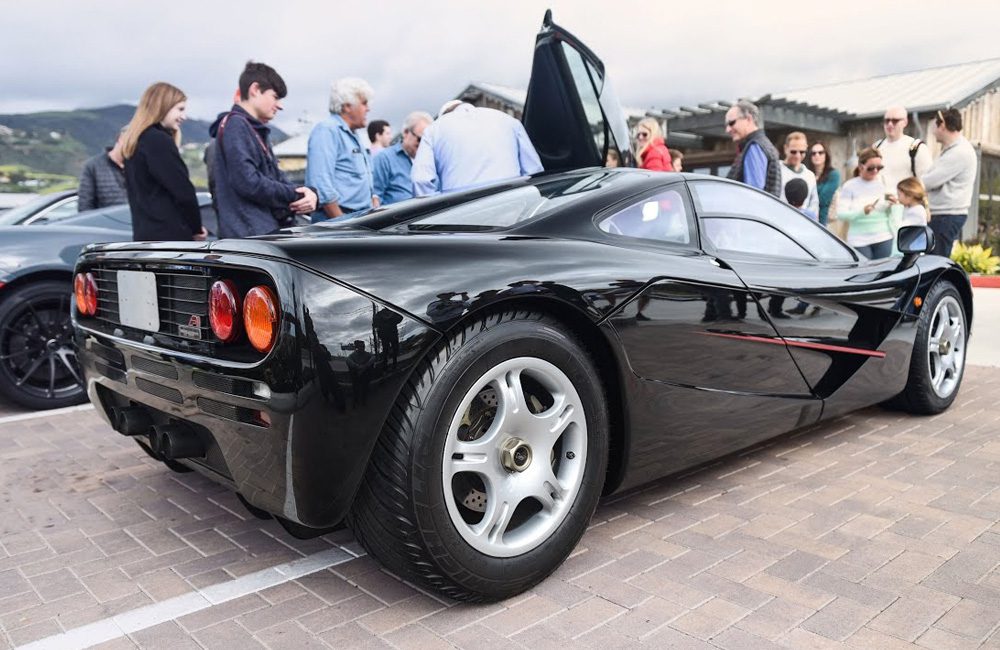 Leno stated in an interview with Wired that people are surprised that the futuristic-looking McLaren was actually a nineties-era car. He stated simply that, “When a car looks right, it[‘s] right.” The ’94 F1 was the first McLaren to be deemed street-legal in the U.S.

In 2015, Leno purchased this 1955 Mercedes 300SL Gullwing Coupe for his garage. He was intent on restoring the coupe, and he was thrilled to be able to purchase it after it was, according to him, “out of reach” for so long. 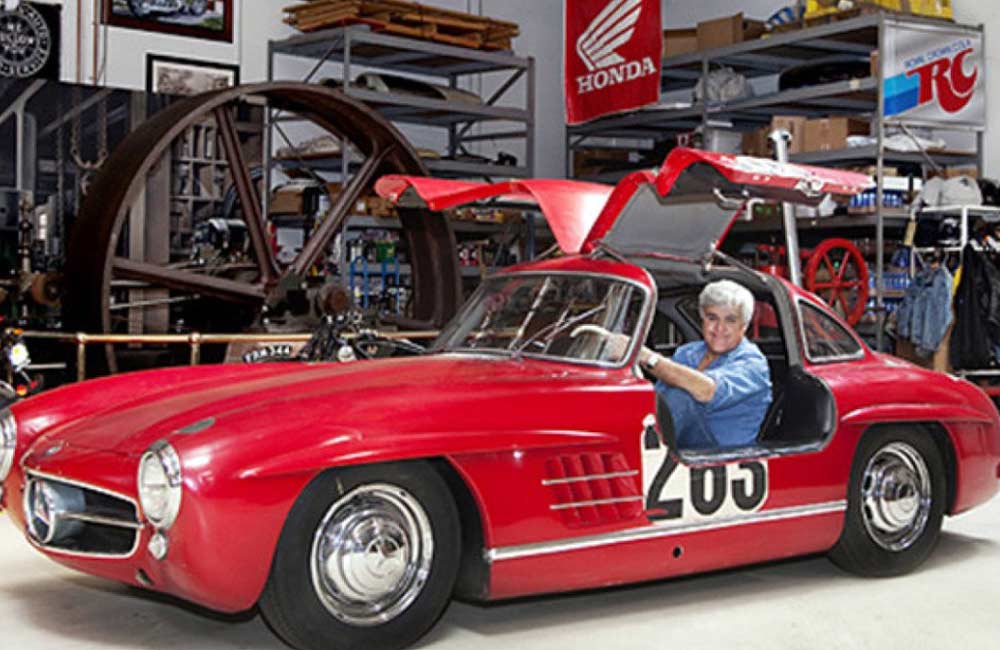 The Gullwing was always ahead of its time, and it makes sense why Leno would covet it so highly. When it came out in the fifties, it had many never-before-seen features to it, including fully independent suspension, tubular space frame, and, of course, those very unique doors. Leno’s currently-under-construction Gullwing will likely keep its famous red paint job.

This is perhaps one of the oldest cars in Jay Leno’s collection. The 1937 Fiat Topolino is on display in his garage, and he actually had plans to auction it off in 2012. This isn’t his only early Fiat; he also owns a ’59 Millecento and a 1917 Fiat Botafogo. The Topolino is, like many Fiats, very tiny. 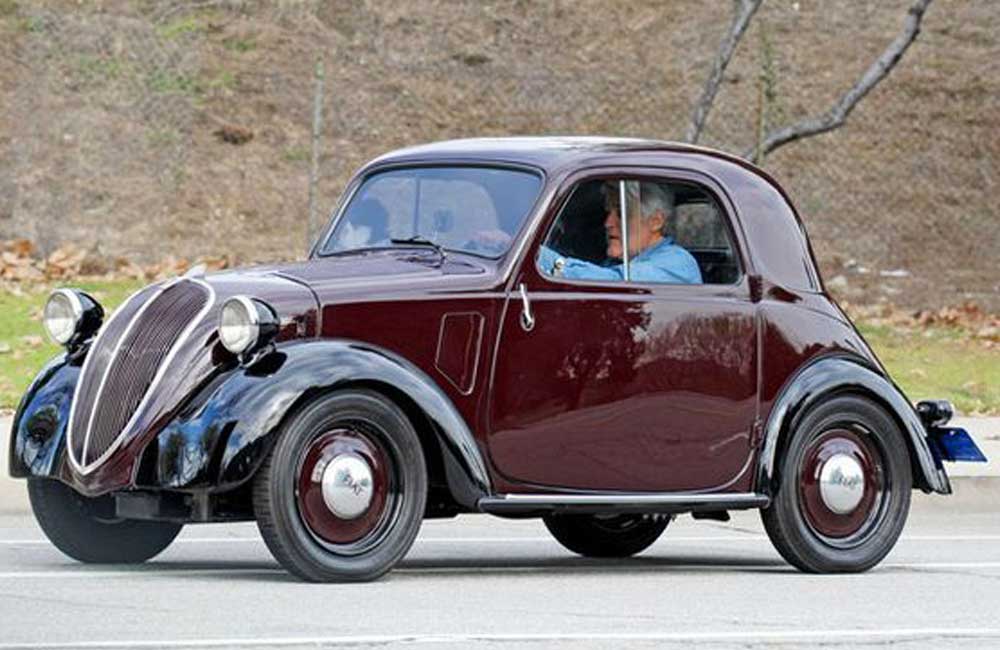 Jay Leno was one of the first Ford customers to take delivery of his super-cool, fast Ford GT. The 2017 Ford GT was one of 45 ever built, and the price increased to $1.2 million as time went on (though Leno got it for a little over half a million). This Ford GT is worth so much because it is a powerhouse. 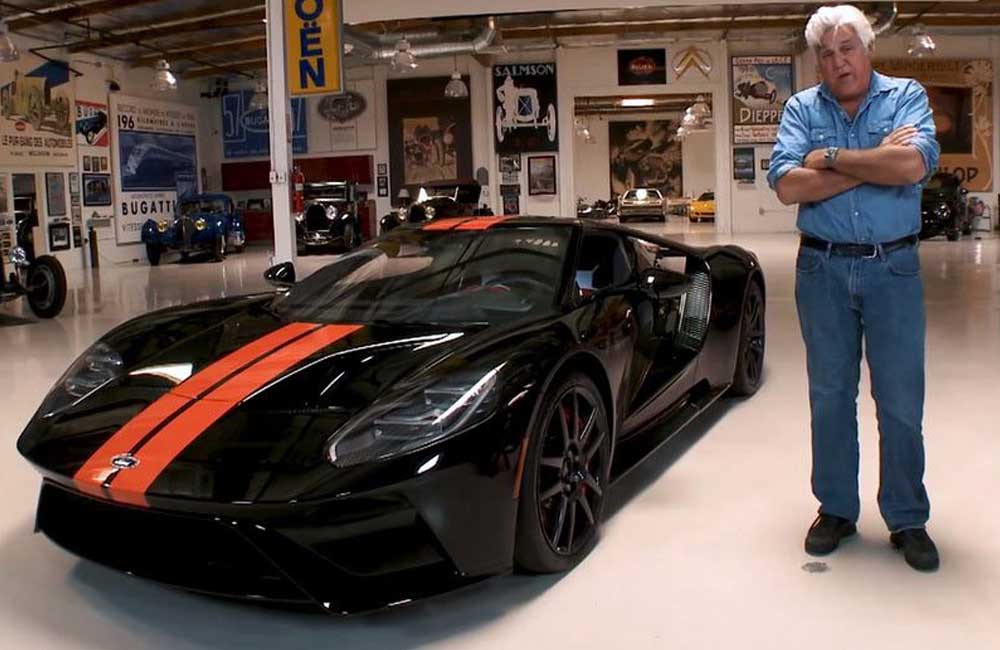 When it comes to classic cars, Leno has admitted that he has a particular fondness for his 427 Shelby Cobra. This 1966 Ford classic was the subject of a contest between Leno and Elon Musk, the head of Tesla Motors. Leno challenged Musk’s Tesla S P85D to a race with his elderly Cobra. 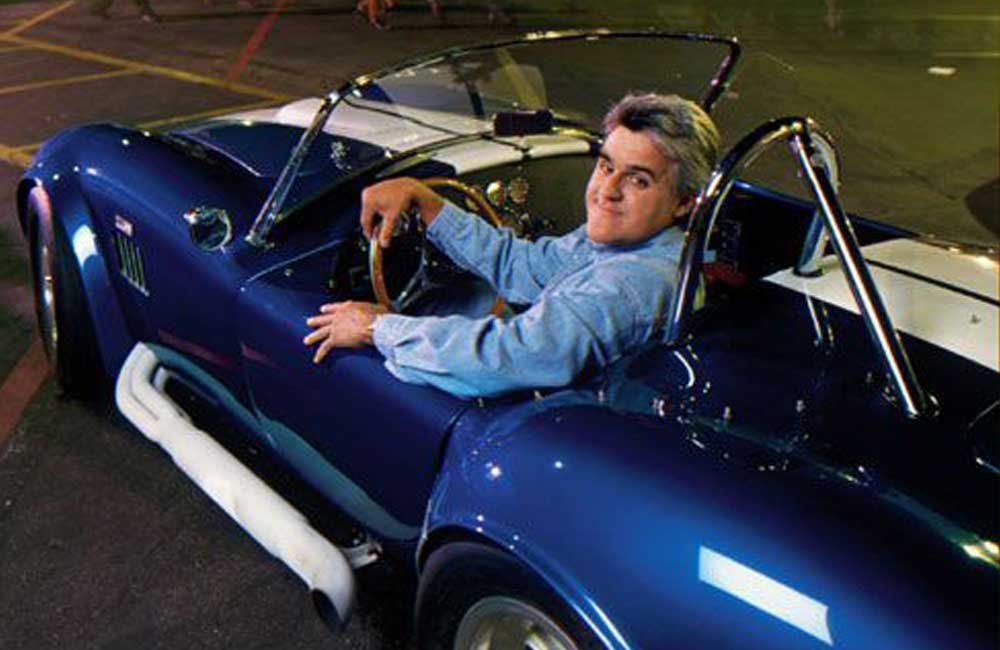 The 1906 Advance Steam Traction Engine is part of Leno’s “Steam Room,” which is the section of Big Dog Garage that holds his collection of steam-powered vehicles. This 1906 Engine dates back to a time before there were cars, and Leno said that he acquired this engine because he isn’t just interested in cars; he’s also a history buff. 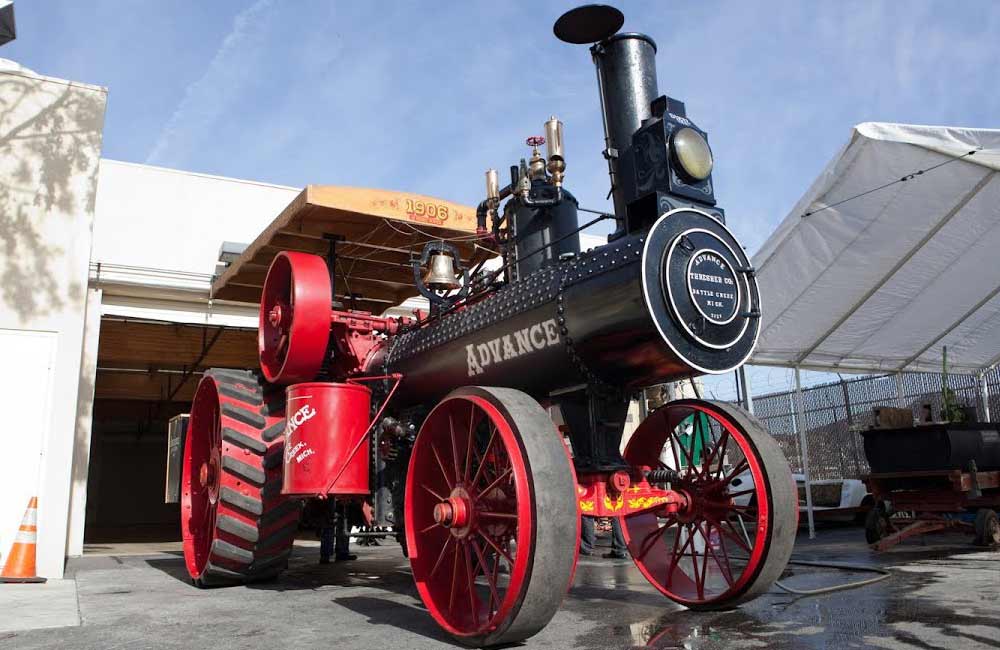 Leno took Hemmings on a tour, explaining that his 1906 Engine held technology that England especially guarded “like it was NASA.” Leno’s 1906 Engine weighs thirteen tons (26,000 pounds) and has a top speed of 4MPH. The only gear change available is reverse. There are no brakes.

In 2007, Jay Leno showed off his 1909 Baker Electric vehicle, which was one of the earliest variations of a zero-emissions car. Thomas Edison owned one of these vehicles. Leno did a photoshoot for the New York Times behind the steering tiller of the antique car. The 1909 Baker Electric was built by Baker Motor Vehicle Company, which was a big-name Brass Era manufacturer. 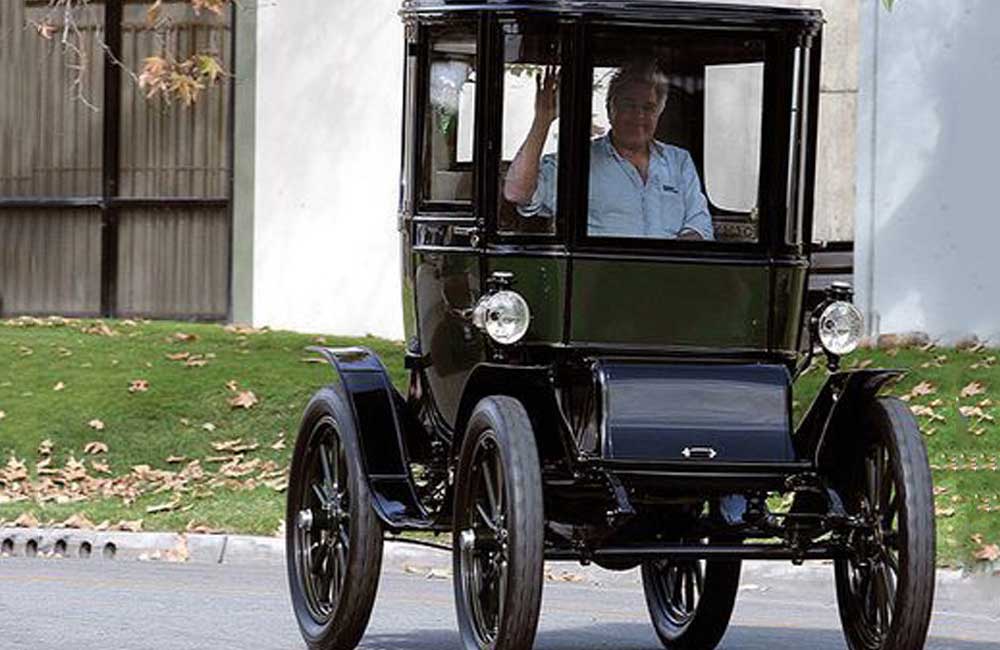 The 1909 Baker Electric is the oldest model from Baker in existence today. Though it has zero emissions, this car is far from aerodynamic and, certainly, it is not road legal. It has a top speed of 25 miles per hour, and there is no steering wheel, only a tiller.

This beautiful blue 1954 Jaguar XK120M Coupe had its body restored in Jay Leno’s factory. This was Leno’s first-ever collector car, and, other than his 1955 Buick, he has never owned a car longer than he has this 1954 Jag. The XK120M Coupe would later get a sibling: the XK120, which was bright-white. 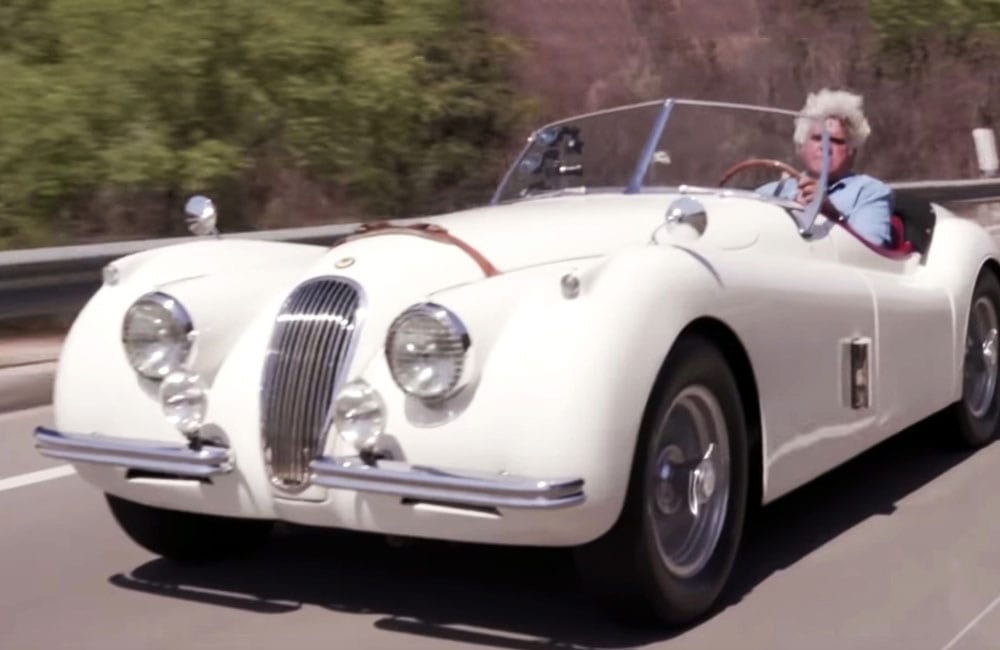 The XK120M first debuted at the London Motor Show. It was so popular there that the founder of Jaguar, William Lyons, bowed to public pressure and agreed to put it into production. A total of 12,055 XK120 cars were made. Only a fraction of these had the “M” designation.

Leno took his 1917 Fiat Botafogo Special for a drive around town, and the sheer loudness of the car impressed/annoyed everyone. His 1971 Botafogo was originally built in Argentina by Adolfo Scandroglio, an Argentinian racer. The car’s top speed is 146 miles per hour, but it has, concerningly, a little trouble stopping and requires about a quarter-mile to brake properly. 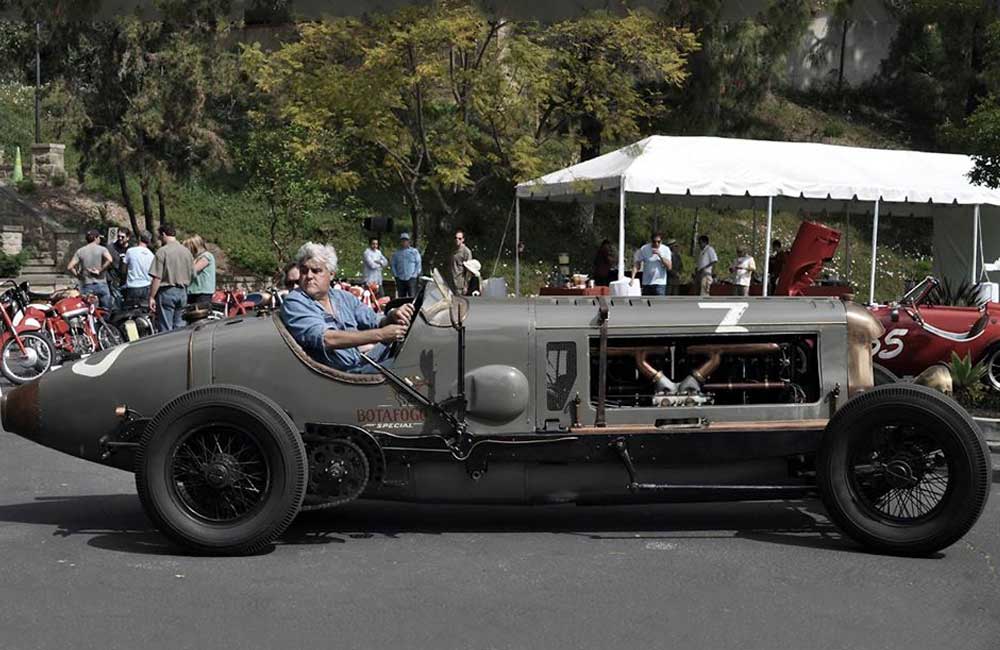 The car’s power comes from its 21.7-liter engine, which was used in a WWI aircraft. The design of this Botafogo Special was based on the Fiat Special Mephistopheles, which was owned by Lord Eldridge, a senior officer in the British Army.

Also one of the louder cars in Jay Leno’s collection, the 1963 Chrysler Turbine, according to the comedian himself, can run using tequila. The Turbine Car was designed by Elwood Engel as a concept car from 1963 to 1964. It uses an A-831 gas turbine engine. 133 of these vehicles were made, but Chrysler destroyed all but nine. 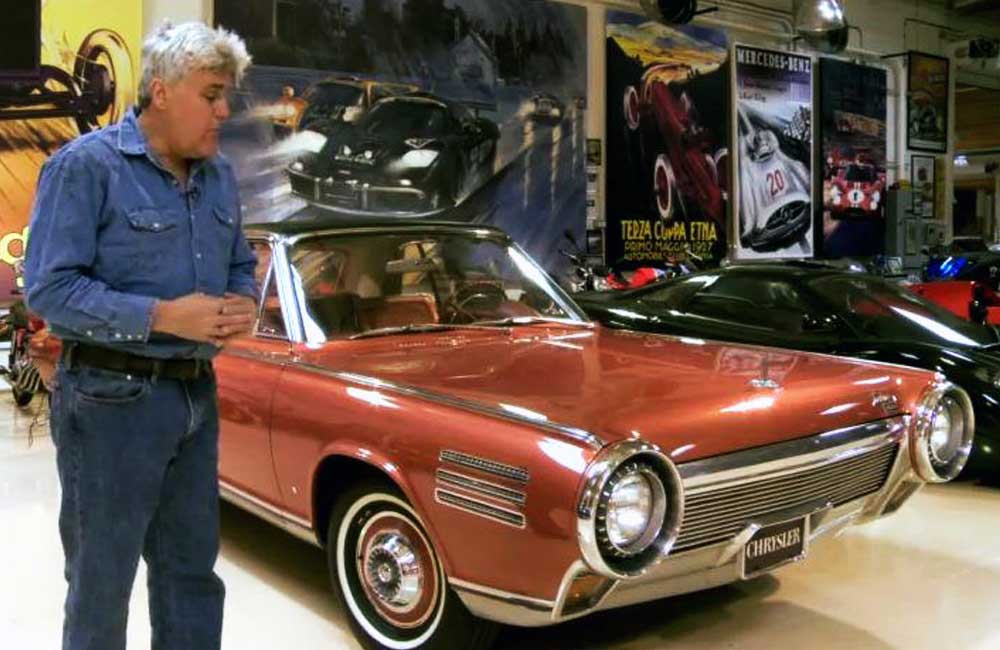 Two of the Turbine Cars are at Chrysler’s factories, five are in museums, and the rest are with private owners. The Turbine never went into production because its engines didn’t meet emissions regulations, so Chrysler couldn’t get a government loan to build them.

Jay Leno is a huge fan of Bugatti. He knows pretty much everything about the history, and he reminded everyone, when walking fans on his YouTube channel through his Bugatti Type 51, that Bugatti was one of the greatest racecar builders in the world in the twenties and thirties, too. 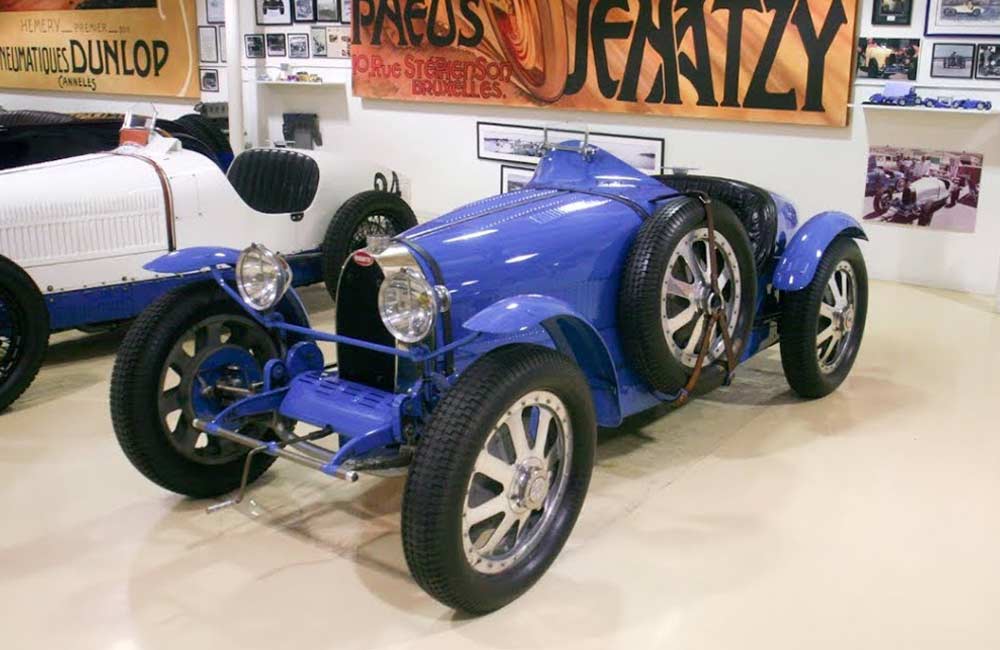 The Type 51 has a supercharged 8-cylinder engine that Leno described as one of the “finest sounds” in car history. The Type 51’s engine design was “borrowed” (or stolen, depending on who you ask) from Harry Miller, an American racecar constructor. The engine got an unprecedented 185 horsepower as a result.

Leno acquired/created this 1932 Bowtie Deuce Roadster LS7 Hot Rod in 2005. He made some changes under the hood to the Bowtie, adding in a GM small-block LS7 engine. He also replaced the frame with that of a 1932 Chevy, which means that this technically qualifies as a hot rod. 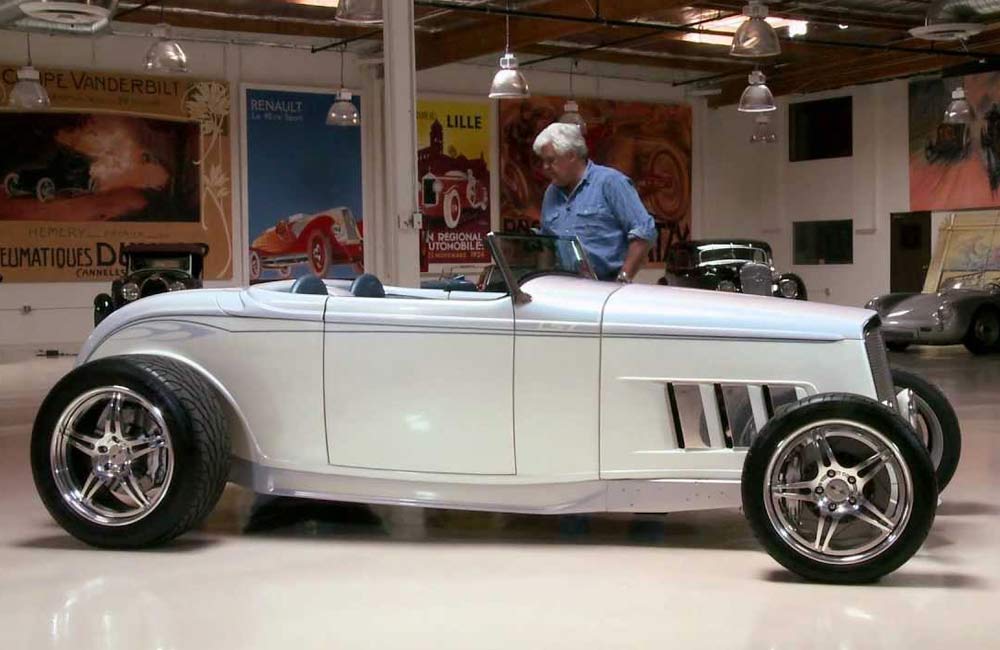 Leno’s Bowtie came about from a partnership with GM. The engine was tuned up to get 580HP and 470 pound-feet of torque, which it owes directly to the parts under the hood, which all came from a sixth-generation Z06 from Corvette (not the first time Leno has put Corvette parts into a hot rod).

Jay Leno’s 1958 Saab 93B sounds, according to Hagerty, like “an angry hive of bees.” He stated in an interview that the ’58 Saab was one of his favorite cars, despite its humble appearance. The Saab runs on a three-cylinder, 0.75-liter engine that gets just thirty-eight horsepower. 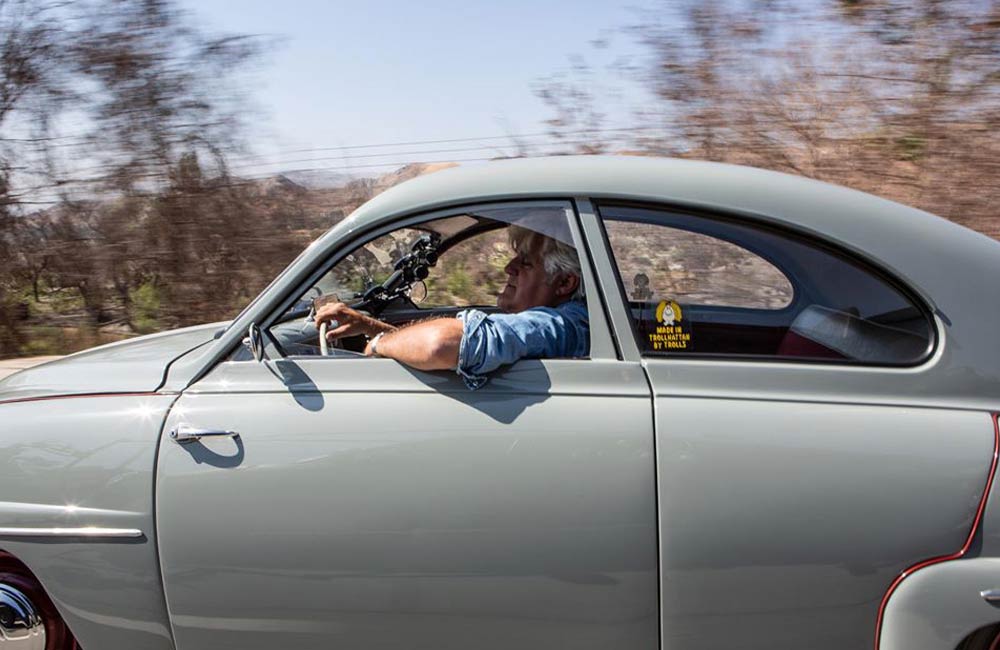 The car has a four-speed transmission and front-wheel drive. Tom Donney Motors sold Leno the 1958 Saab 93B fifteen years ago. Leno had invited the owner, Tom Donney, out driving many times, and he fell in love with the Saab and asked to purchase it for his collection. The Saab was one of the first cars he featured on Jay Leno’s Garage.

The 25 Biggest Fines In Sports History
Athletes aren’t the only ones in the professional sports industry who must remain well-behaved. Coaches and owners are also held accountable for wrong-doings and mindless acts. Whether they’re breaking expensive equipment, league protocol, or the law, there’s always some reason sports industry folks are making headlines.  From billionaire pocket change to sums that could buy […]
These Are The Used Cars Most Likely To Become Coveted Collectibles
What makes a car a collectible? The general consensus is that a car that is twenty-five years or older is eligible for “collectible status,” but age isn’t the only factor that makes a car a classic. Some vehicles are relegated to the history books without any fanfare, while others become rare, pricey must-haves that collectors […]
Amazing Things From The 80s Our Kids Are Missing Out On
Anyone who experienced the 80s can vouch that it was a weird and exciting time in America. Michael Jackson was topping the charts with countless tracks from his Thriller and Bad albums. Glam rock was in full swing, which meant hair was big, make-up was overdone, and clothing was bright beyond belief. Whether you look […]
The Weirdest, Most Wonderful and Expensive Things Found in the USA
America. The home of the free, the land of the brave, and the country with some of the strangest things found anywhere on Earth. People travel from all over the world to see the weird and wonderfully odd things America has to offer.  Whether you’re looking to indulge in a $1,000 golden sundae, visit the […]
Advertisement