Everyone loves a good party, but not everyone loves the clean-up, the planning, and how expensive they can turn out to be. Luckily for all the party animals out there, there are plenty of tips, tricks, and handy hacks that can cut the cost in half and make it a stress-free experience – you just have to know where to look.

From the ideal way to chill Kroger wine to a surprising way to serve cocktails, these party hacks can transform your special occasion into something all the more magical. Would you try some of these?

What It Is: Extra storage space for drinks
Estimated Cost: Free/$2 for ice

Everyone that’s ever thrown a party knows that the refrigerator gets filled up pretty quickly. Even if people bring their own booze, they usually want somewhere to put it so it doesn’t get warm. Instead of splashing the cash on several coolers, fill up the washer with ice instead. 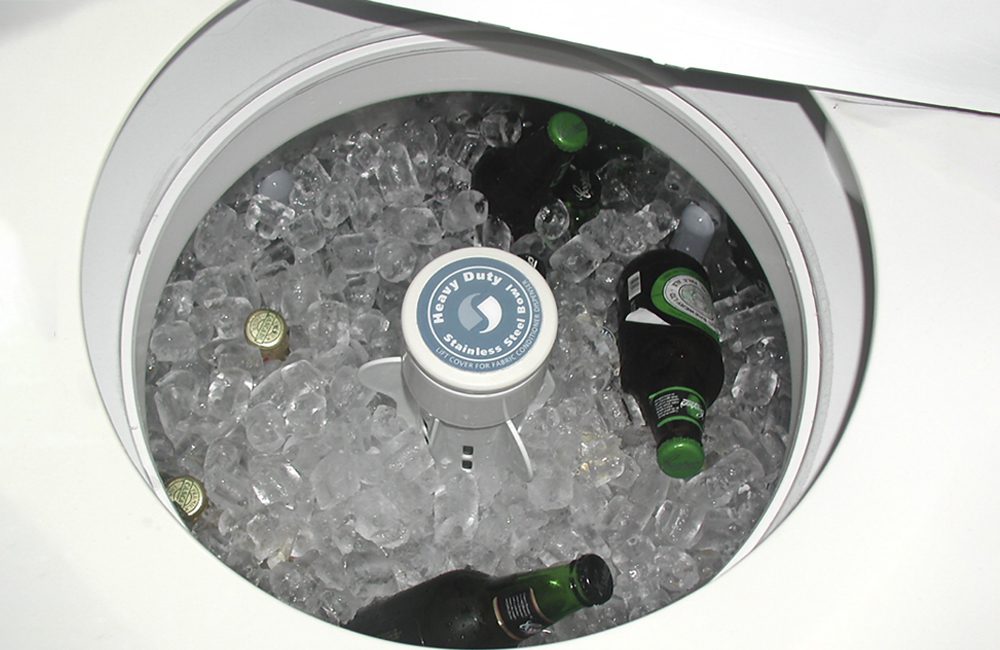 Use The Washer To Chill Drinks @burkiett / Pinterest.com

Buying a bag of ice from Walmart costs next to nothing, and most people already have a washer at home anyway. Since the drum is designed to get wet, it’s the perfect place to store beers. Plus, the metal will keep the ice cooler for longer.

What It Is: A way to get crystal clear ice cubes
Estimated Cost: Free

Most of us fill up ice cube trays straight from the tap, but have you ever thought about why the ice cubes look cloudy? This might not be true if you use filtered water, but if you don’t, you’ve probably noticed the cloudiness. 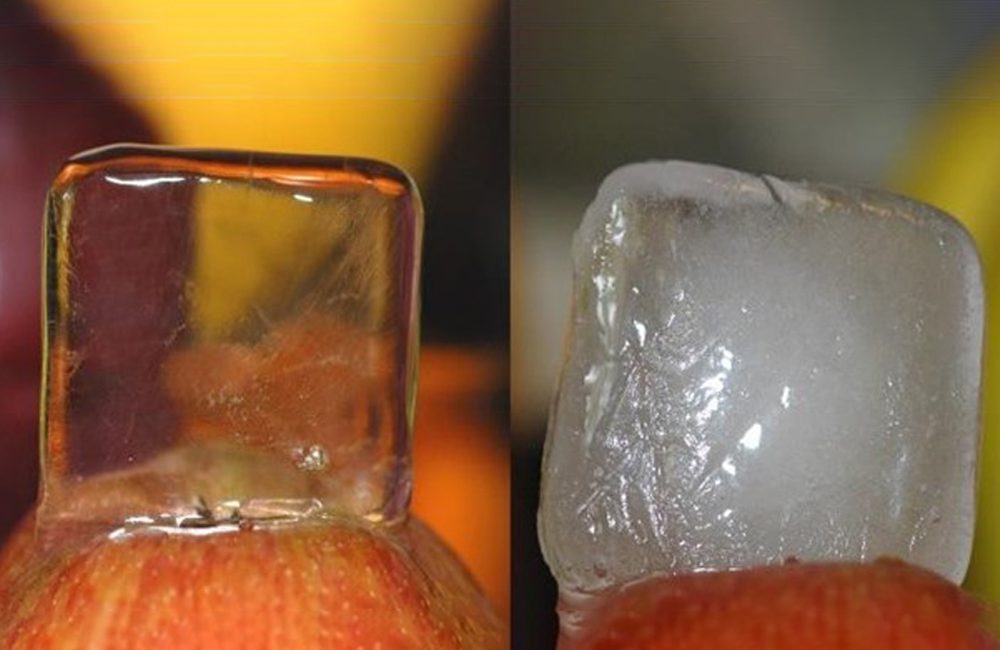 You can fix this by boiling water before you freeze it. It might seem counterintuitive, but it makes all the difference when you’re serving it to your friends. The best part? This hack is virtually free, with no expensive Amazon gadgets in sight.

What It Is: A handy way to tie balloons quickly
Estimated Cost: $3 or free if you already have pliers*

Tying balloons over and over again can feel like a repetitive, boring, and frustrating waste of time. It’s not always easy to get the job done, but it could be. Instead of making your fingers sore and cursing like a sailor for an hour straight, use a pair of pliers to help. 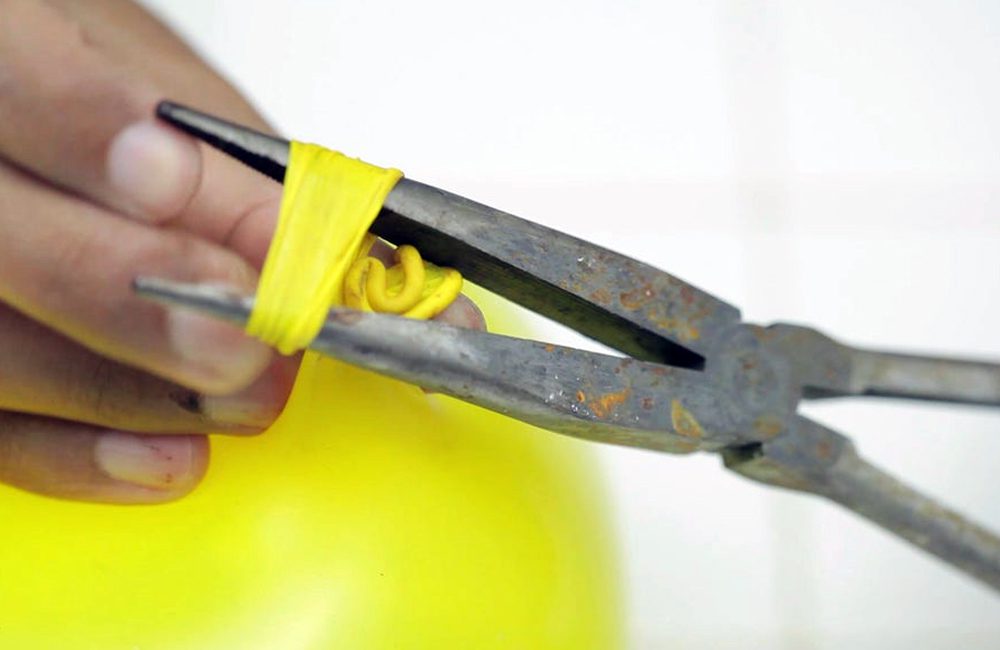 By carefully using the pliers instead of your fingers, you should be able to get a bunch of balloons tied up in no time at all. If you don’t already have a pair of pliers, then don’t panic. You can pick them up at places like Home Depot for just a couple of dollars.

What It Is: A whole watermelon juice dispenser
Estimated Cost: $5-$10*

This hack may not be the cheapest around, but it will wow your guests and take care of refreshments. Buy a whole watermelon, a juice dispenser tap, and you’ve got yourself something impressive. Cut a hole in the top of the watermelon and pour in some fruit juice or even coke. 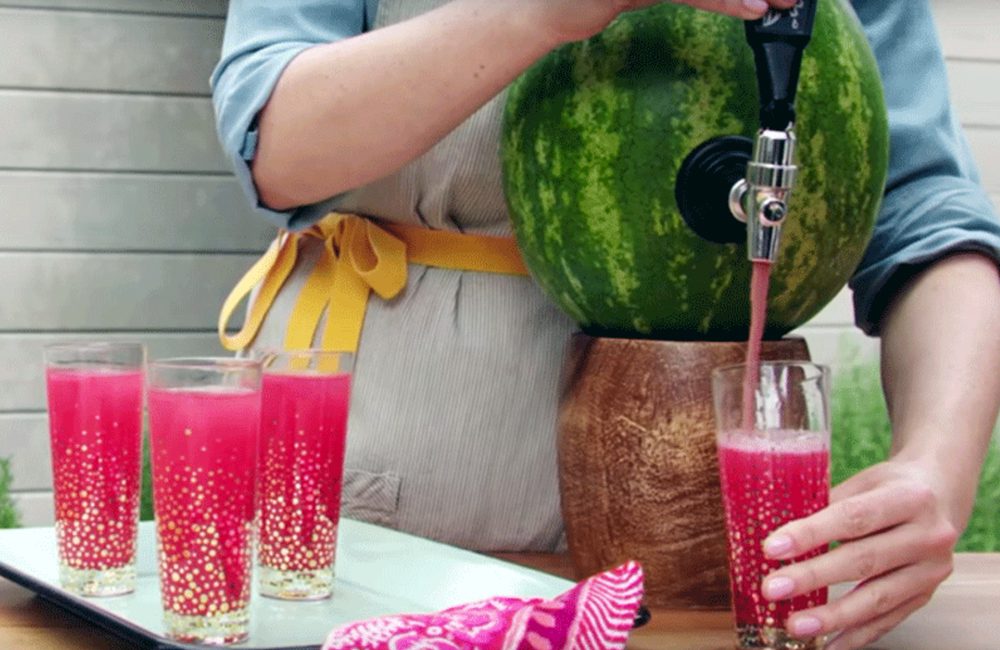 Stick the dispenser tap at the bottom and turn it on to release the juice. The best part? You can keep topping up the watermelon throughout the party so it never runs out. This is something so interesting that guests might even post about it on Facebook.

What It Is: Jello shots in a hard-boiled egg casing
Estimated Cost: $5=$10*

If you’re desperate to make jello shots but don’t have shot glasses, all is not lost. Instead of abandoning the cause totally and making regular drinks, boil some eggs. Scoop out the yolk and pour the jello mixture inside it. 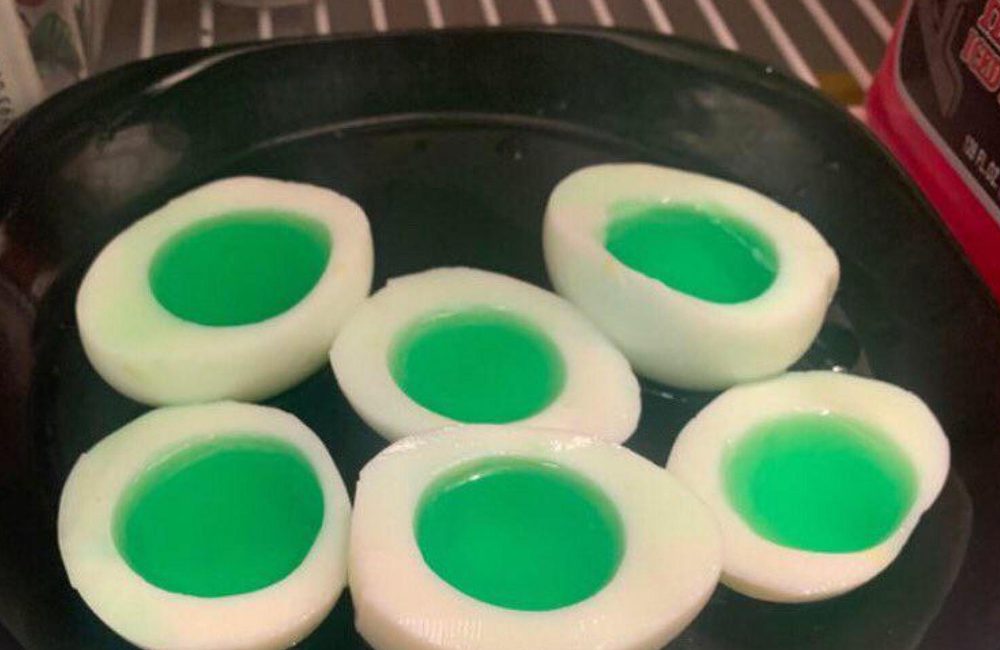 Once they’re set, you’ve got a weird egg-beverage hybrid that no one would ever see coming. Is it a hack that everyone will enjoy? Absolutely not. But it will be talked about for years to come, for all the wrong reasons. Being a normal host isn’t everything it’s cracked up to be anyway…

What It Is: Party poppers made from confetti and toilet paper rolls
Estimated Cost: $5*

Party poppers are fun, but they aren’t exactly good for the environment. For a start, they’re made from plastic which isn’t biodegradable. If you want the same effect but would rather do something a little greener, you can make your own poppers out of toilet paper rolls and paper confetti. 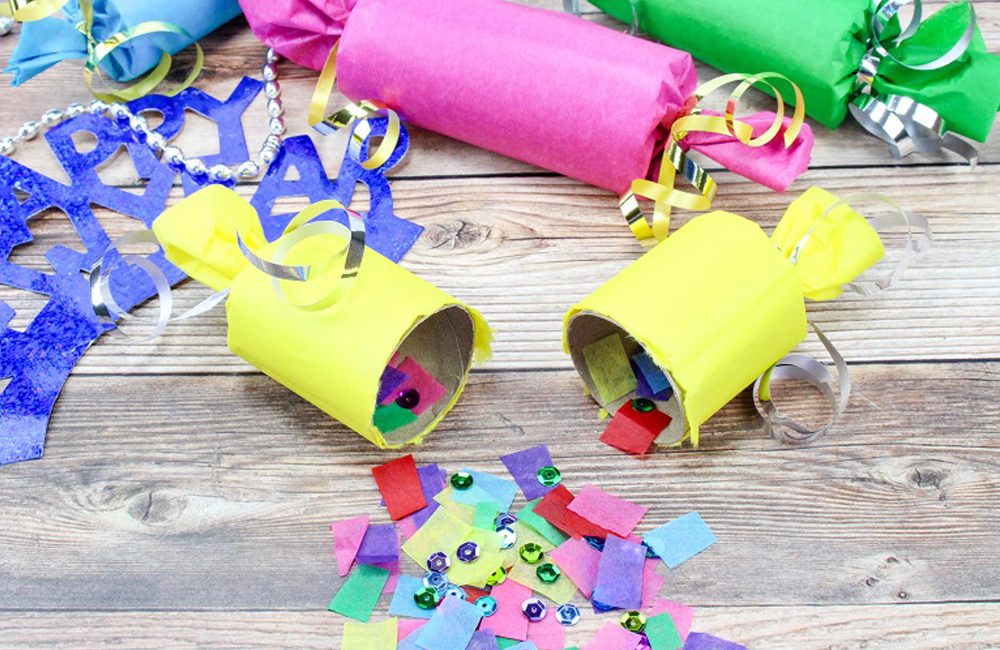 Balloons (you can also get biodegradable versions of these) act as the “popper” making the confetti fly everywhere. It’s just as messy, the clean-up is just as bad, but the celebration vibe is just the same. What more could you ask for?

Party centerpieces can get a little bit boring, but it doesn’t always have to be that way. Instead of following the crowd and going for something chic and sophisticated, get a blow-up dinghy and put it in your garden or dining table. Fill it with ice, booze, throw in a few slices of lemon and you’ve got a giant cocktail. 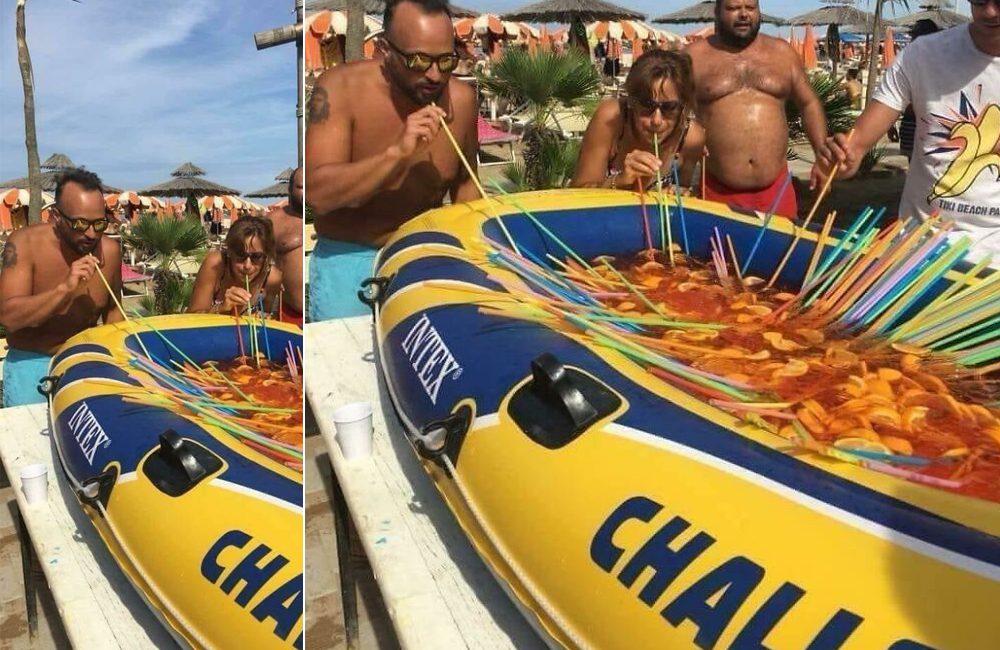 Use An Inflatable Boat For Giant Cocktails @tendencee / Pinterest.com

The cocktail will be so enormous and so funny to look at that your guests will be taking Instagram selfies with it all night. Just make sure that you’re comfortable sharing saliva with everyone you invite because it’s probably not all that hygienic.

What It Is: A way to instantly chill wine
Estimated Cost: Free

There’s nothing worse than warm wine when you’re desperate for a drink. Throwing it in the fridge is one thing, but waiting a few hours for it to be perfect temperature is another thing entirely. Instead, get a wet dish towel and wrap your wine inside it before putting it into the fridge. 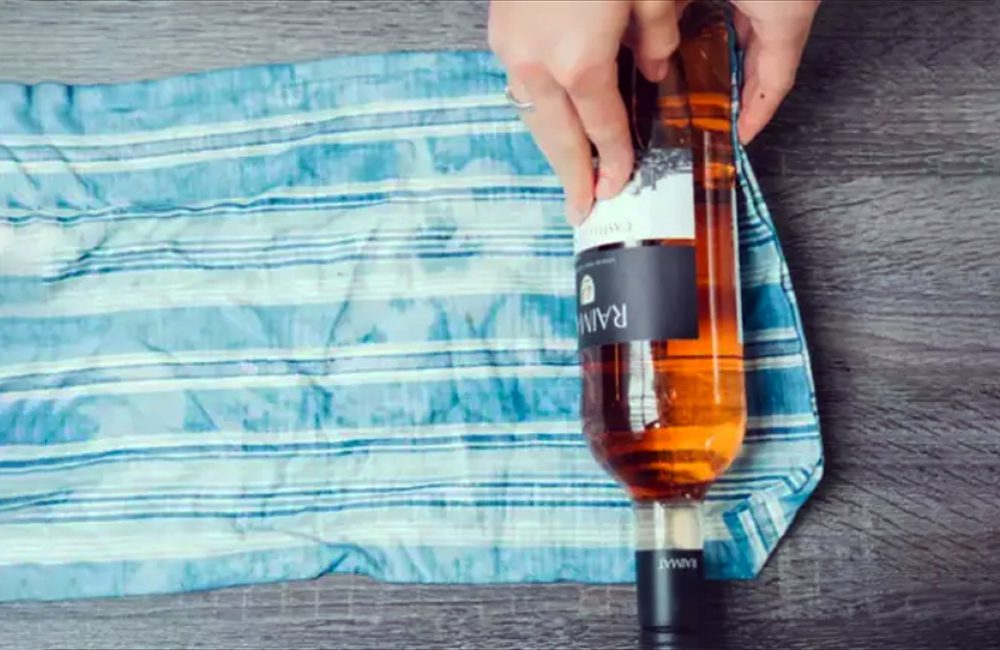 This will help cool the wine at a much quicker rate, making that bottle of Kroger’s finest ripe for the drinking in no time at all. No more standing around waiting for hours on end, or rummaging in the freezer for ice cubes. You’re welcome.

What It Is: Repurposing a muffin tray
Estimated Cost: Free/$4*

Nearly every kitchen has a muffin tray, but most of us don’t realize just how useful these incredible inventions actually are. They aren’t just good for making cakes, they’re good for holding drinks and snacks, too. 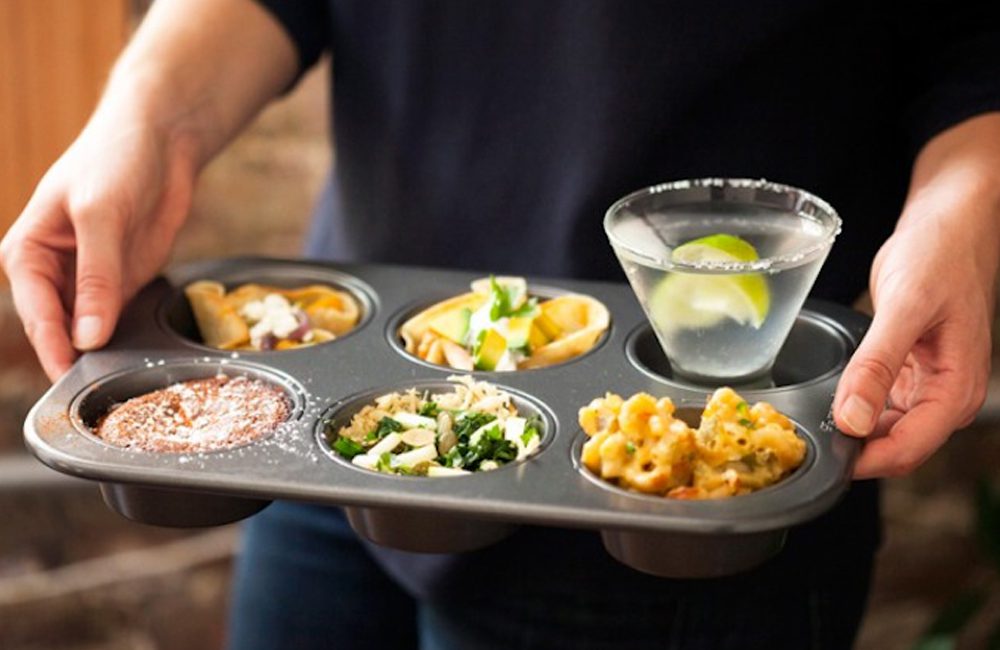 Each hole can be filled with nibbles or dip so that guests can help themselves throughout the evening. They’re also very easy to clean, making this a foolproof must-do at your next big event. Everyone else will follow suit in no time.

What It Is: A sprinkler made from a bottle
Estimated Cost: $1*

Throwing a party in the summer months can be a great way to keep the whole family entertained, but what about planning activities? If you don’t want to run around after the kids all day, then this could be the perfect answer. 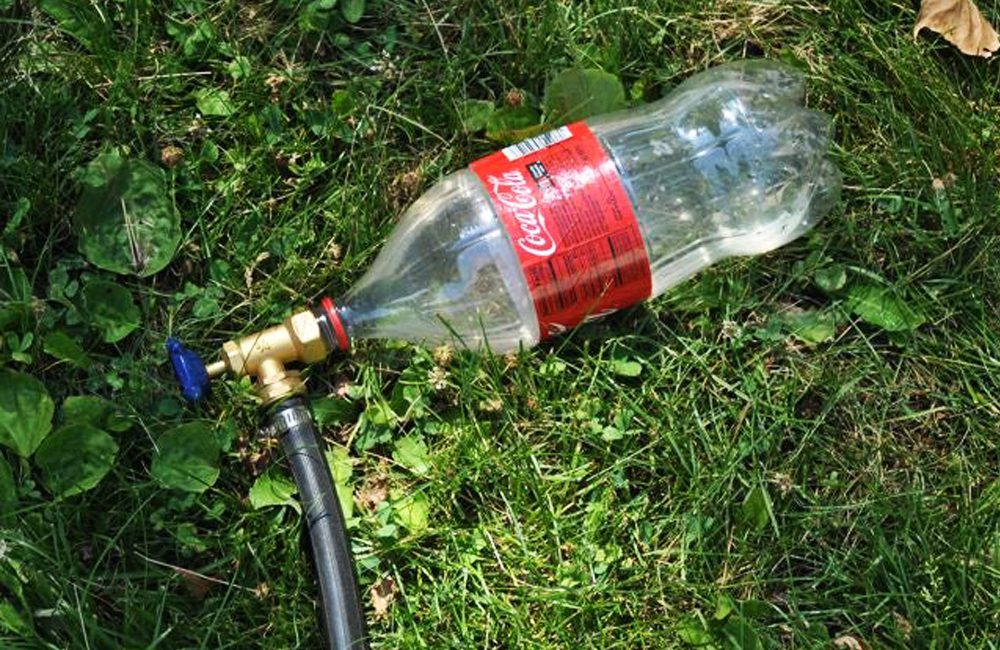 Take an old soda bottle and attach it to a hose with some tape. Poke some holes in it, turn the hose on, and you’ve got a makeshift sprinkler that the kids will enjoy for hours on end. The best part? It costs next to nothing.

What It Is: An ice alternative
Estimated Cost: $3*

Ice is easy to make and cheap to buy, but you might want to think twice before you put it in your wine. Sure, it might be good for the first little while, but when it starts to melt it’s going to make your drink watery and nowhere near as tasty as it should be. 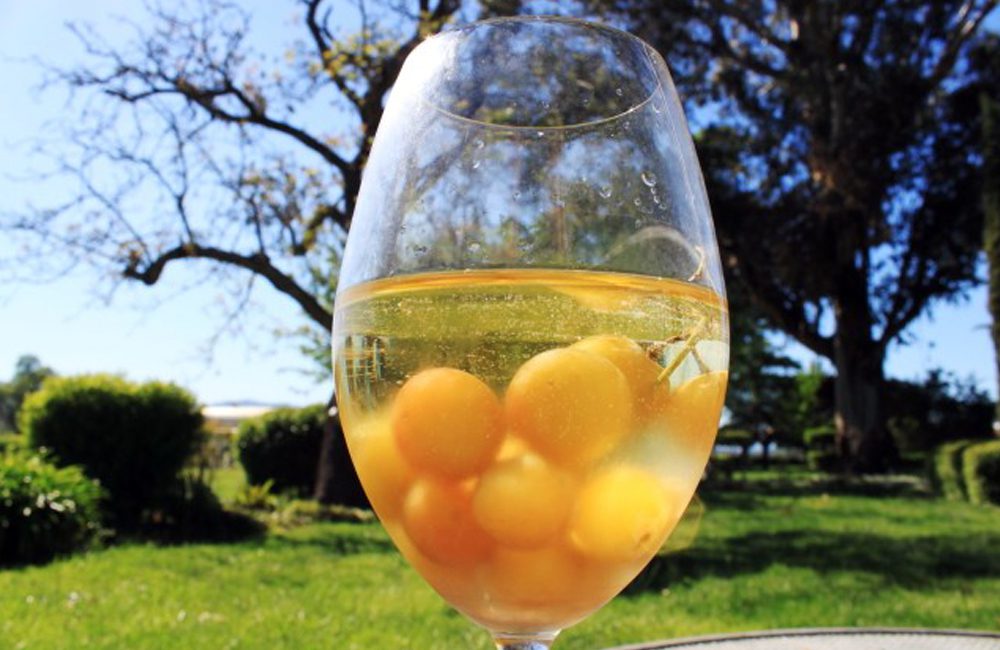 Use Frozen Grapes Instead of Ice @MrsKrishan / Pinterest.com

Instead of using ice cubes so readily, stick a bunch of grapes in the freezer and use those instead. They have the same cooling effect without melting down and making your Bud taste like a watered-down version.

What It Is: Clip the clip to the fridge to make sure it stays
Estimated Cost: $2*

Bulldog clips are great for all sorts of things in the office, but next time you see one lying around you may want to take it home. This hack only works if you have a particular type of shelf in your refrigerator. If you’re lucky enough to have the shelf in question, then this could solve all your beer storage problems. 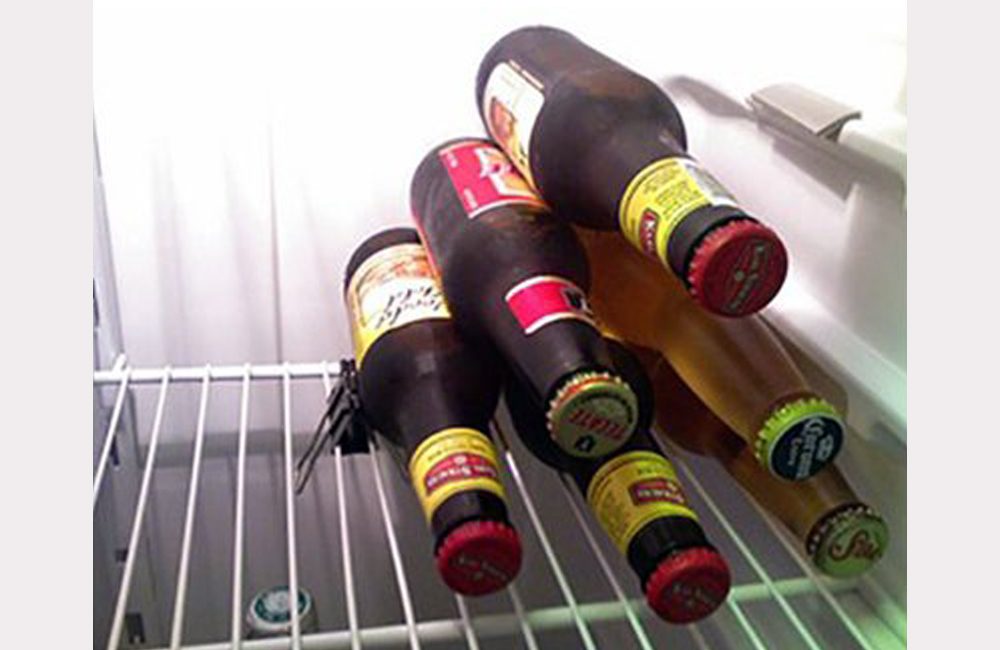 Instead of letting beers roll around the fridge when you stack them, place the bulldog clip on the shelf and then stack them. The clip acts as a little ledge that will keep the beers in place, allowing you to make a nice little pile without taking over the whole shelf.

What It Is: A handy way to keep chips fresh
Estimated Cost: $3*

Opening up a bag of chips and pouring them out into a bowl is something most of us do when we have people over. However, if they don’t all get eaten then it’s somewhat of a waste. Instead of going all in, take an old baby wipe pack and cut off the seal. 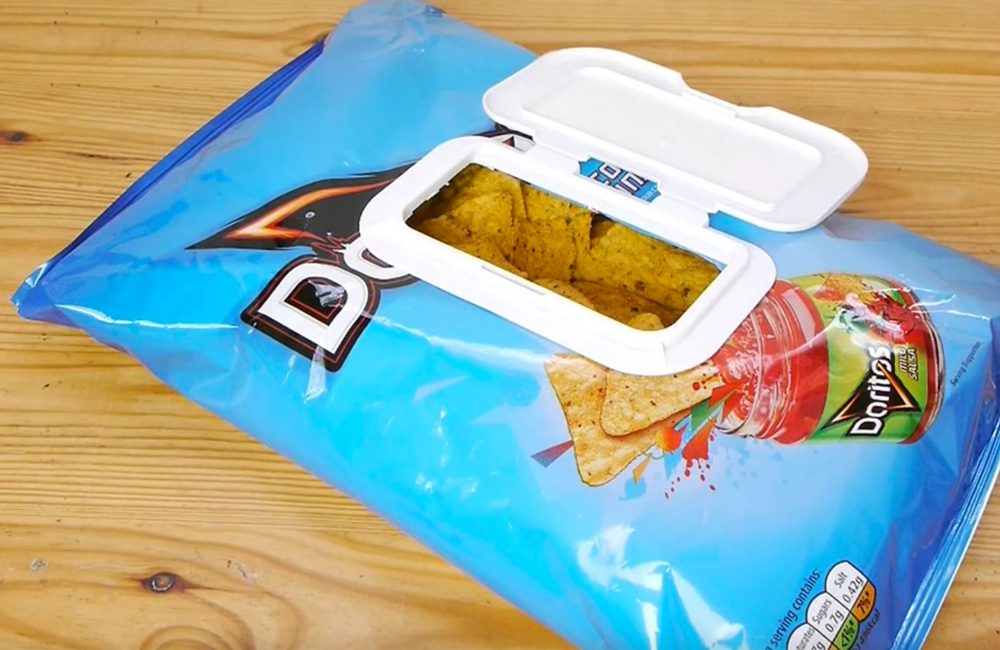 Cut a hole in the front of a bag of chips and then stick the lid on top. It might seem like an unnecessary chore, but you’ll be glad you did it when the chips don’t get thrown into the trash at the end of the day.

What It Is: Reusable ice
Estimated Cost: $3*

If you don’t have enough room in the refrigerator for copious amounts of booze, don’t panic. There’s more than one way to skin a cat – or in this case, to chill a bottle. Get some water balloons and fill them up, before placing them in a baking tray and putting them in the freezer. 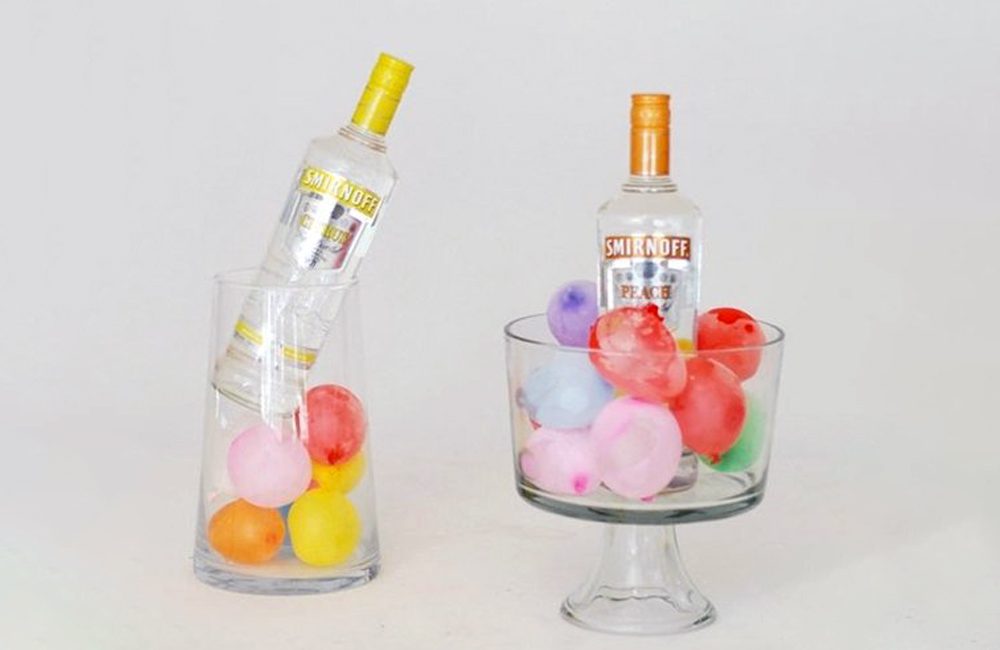 Once they’re frozen, take them out and place them into a cooler or a large bowl. Place the bottles you want to keep chilled on top and there you have it – reusable large ice cubes that are good for all sorts of things.