The defense industry is one of the most profitable trades in the world. In America alone, the total sales from the defense sector comprises $389 billion, with companies like Lockheed Martin taking the lead. Globally, it boasts profits of over $760 billion. A huge part of that revenue comes from aerospace technology.

Comparatively, war plane construction is far younger than other segments of the defense industry. The first aircraft made specifically for the military was the 1909 Wright Military Flyer, designed (amid fierce competition) by the Wright Brothers for the U.S. Army Signal Corps. Fast forward a century, and it’s not unheard of for high-tech military planes to cost nearly $1 billion.

The manufacturer behind the P-8A Poseidon is Boeing, one of the largest defense manufacturers in the world. The Poseidon (which was initially titled the Multimission Maritime Aircraft) was created specifically for the US Navy. The Poseidon is mainly operated in anti-surface warfare, anti-submarine warfare, and shipping interdiction roles. Its arsenal includes Harpoon anti-ship missiles and torpedoes. 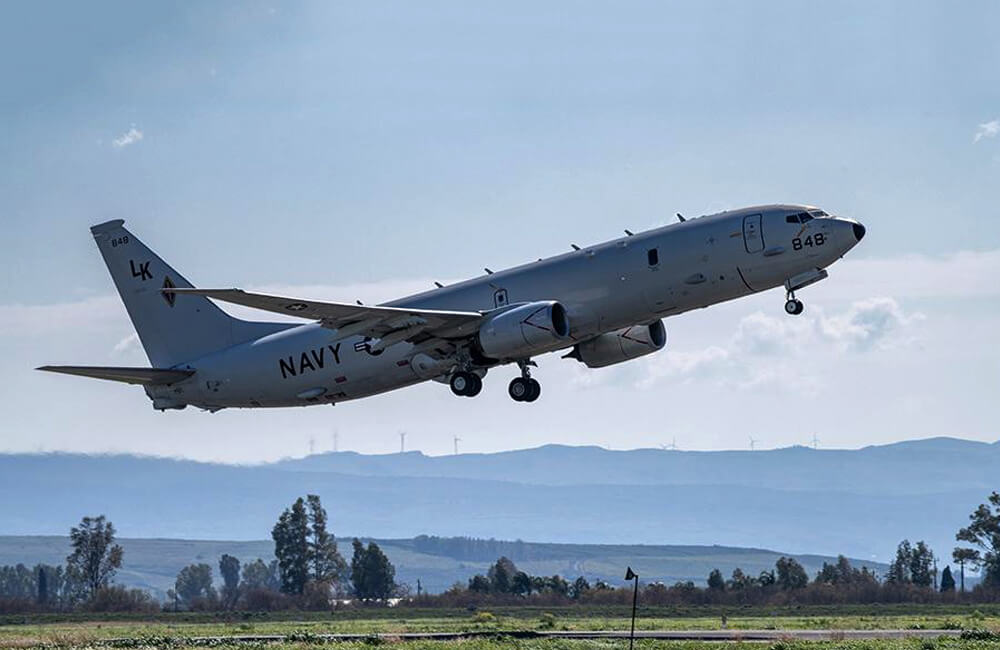 The Poseidon also can drop sonobuoys. On board, you’ll find that Boeing Co works in conjunction with other assets, such as the Northrop Grumman MQ-4C triton, which is a maritime surveillance UAC. The US Navy, as well as the RAAF, RAF, RNoAF, ROKN, and RNZAF all use the P-8A Poseidon in their operations.

Two of the world’s leading defense firms created the Bell Boeing V-22 Osprey. After a late-eighties military crisis underscored the need for a new vertical-takeoff, long-range, high-speed aircraft, the DOD tapped Textron Inc and Boeing Co. to build the multi-mission aircraft as quickly as possible. The V-22 Osprey flew its first mission in 1989. 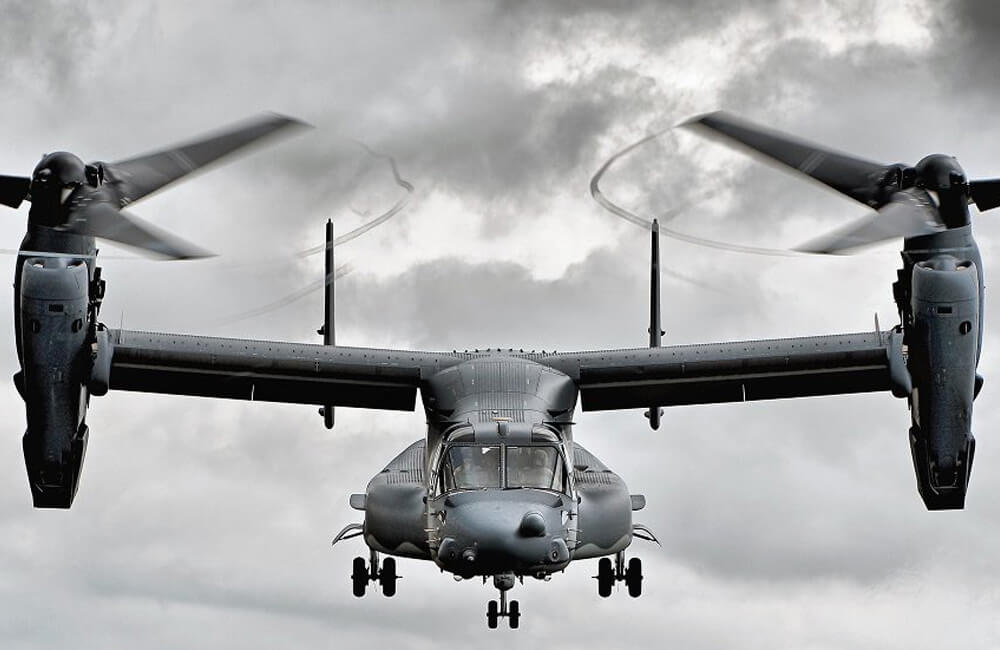 The Osprey is designed with the functionality of a regular helicopter. However, it has the high-speed, long-range cruise performance that you normally find on a turboprop aircraft, giving the Osprey both practicality and lethality. The Marine Corps, Air Force, Navy and Japan Ground Self-Defense Force all use the V-22 Osprey.

The MiG-21, created during the Soviet Union by the Mikoyan-Gurevich Design Bureau is an aviation record-holder. This fighter plane was not only historically used by the Soviet Air Force, it was also used by the Romanian, Croation, and Indian Air Forces. 11,496 were produced (10,645 of which were made in the USSR by ). 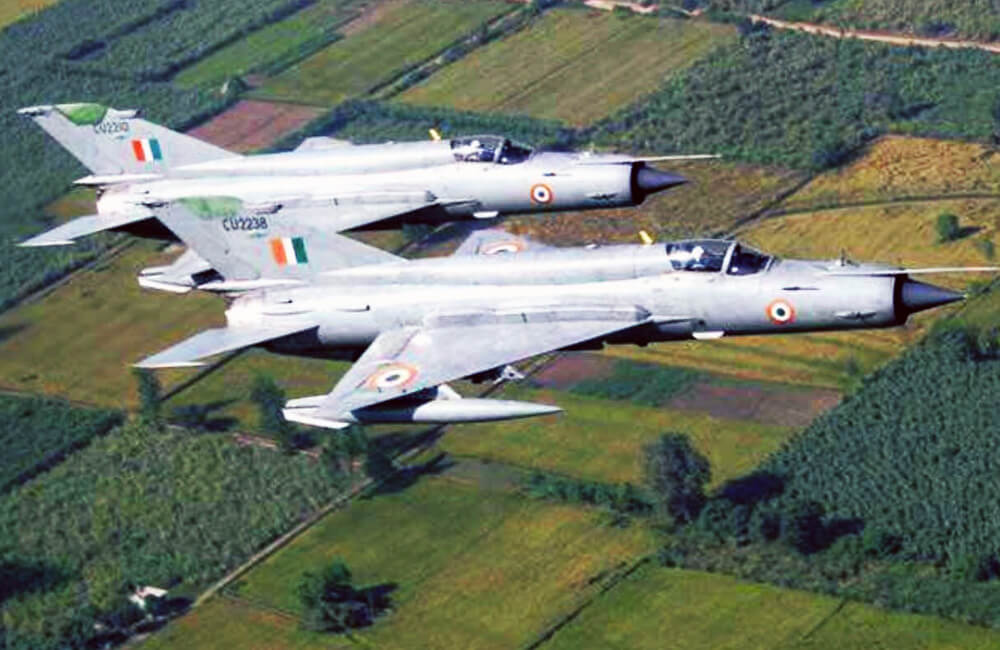 This set a record for the most-produced supersonic jet in the history of aviation. It also had the highest production of any post-Korean-War combat aircraft. The MiG-21 is still in service, and it has the third-longest production run for a combat aircraft (next to the E-15 Eagle and the Fighting Falcon F-16).

Another Soviet-era plane was the MiG-31 Foxhound, which was designed by the Soviet Union in 1975 and introduced in 1981. This plane is still in service, used by the Russian Aerospace Forces and the Kazakhstan Air Force. 519 of these supersonic interceptor planes have been made thus far by . 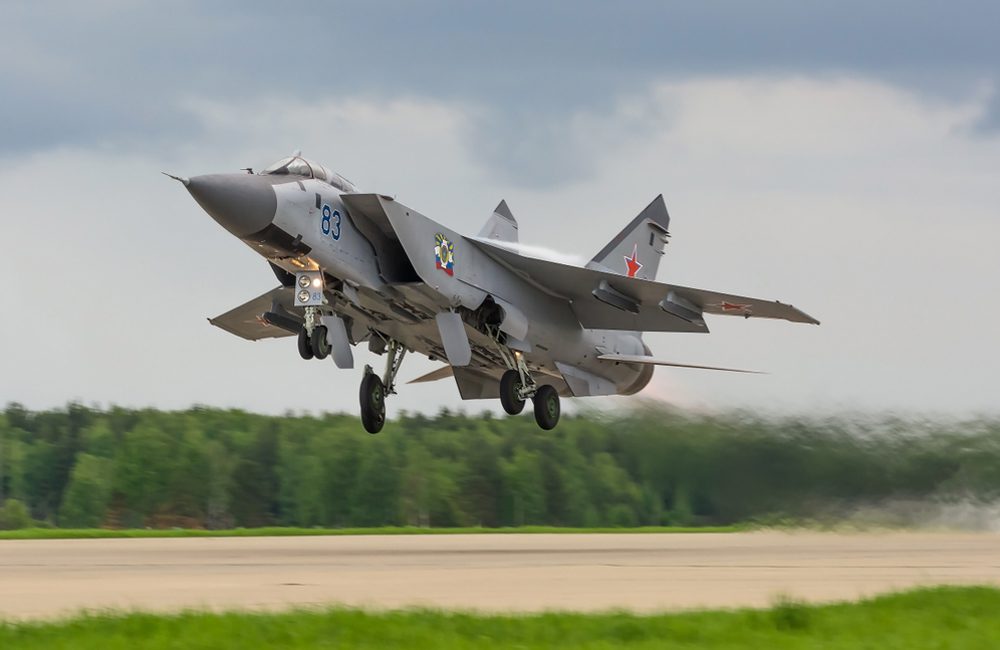 The MiG-31 Foxhound was designed to replace the Foxbat, and it shares the same design elements as its predecessor. The MiG-31 is one of the world’s fastest combat jets, which is likely why it was not retired after the collapse of the Soviet Union. Russia announced that it will keep the MiG-31 in service at least until 2030.

Northrop Grumman is one of the largest defense manufacturers in the world, with revenues of over $30 billion per year. One of Northrop Grumman’s best-known creations was the B-2 Spirit. Also called the Stealth Bomber, this heavy strategic bomber had technology designed to penetrate dense anti-aircraft defenses. 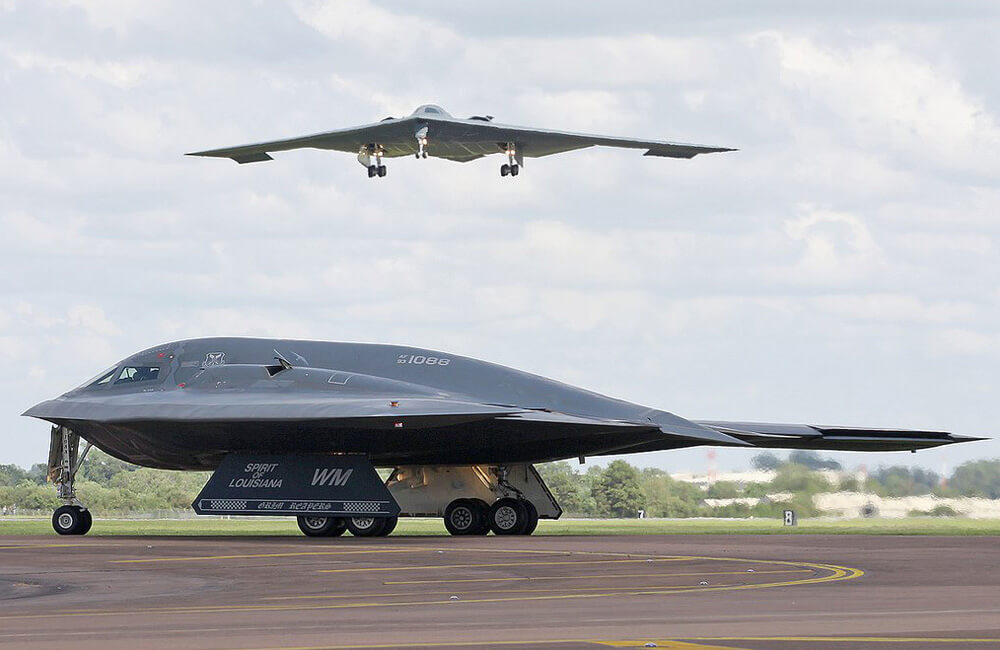 The B-2 Spirit is designed to fly with a crew of just two people, and it uses both thermonuclear and conventional weapons. This Northrop Grumman Corp jet had its first flight in 1989, and it was produced until 2000. Nineties-era Stealth Bombers are still in use today, though the high cost made the project unsustainable for long. 21 were made.

Dassault Aviation developed the Dassault Mirage 2000, which is a multi-role fourth-generation jet fighter. The Mirage 2000 was created in 1978, and it was officially introduced for use in the French Air Force in 1984. The Mirage 2000 is also used by the United Arab Emirates Air Force, the Indian Air Force, and the Taiwanese Air Force. 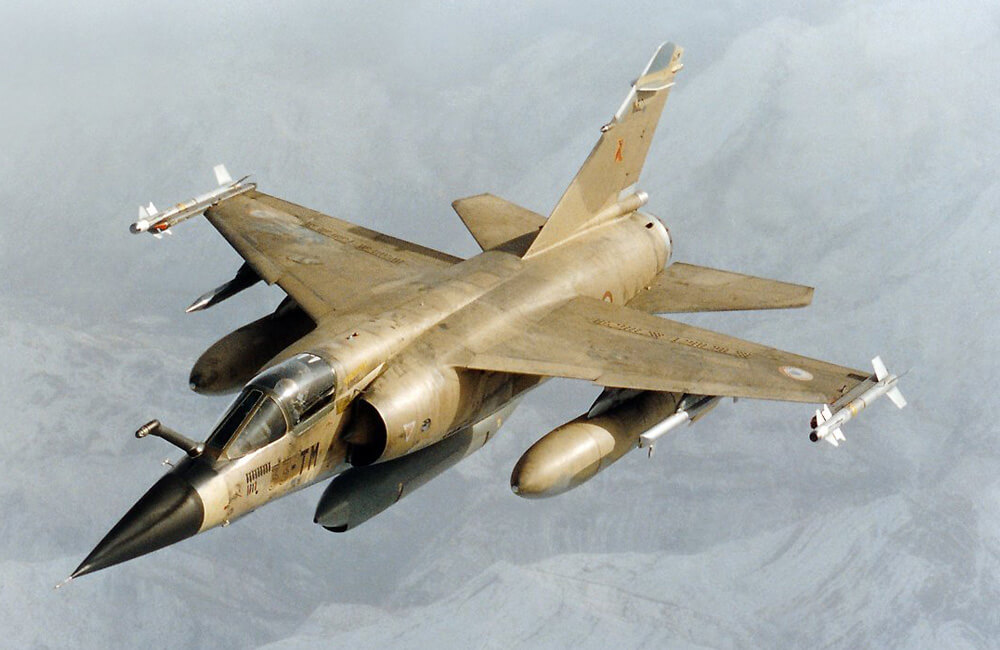 The Mirage 2000 has had several variants, including the 2000N and 2000D developed by from it, making it somewhat of a leading predecessor. Later, this lightweight fighter would be developed into the Dassault Mirage 4000. 601 of these jet fighters have been built thus far.

Boeing teamed up with McDonnell Douglas, its subsidiary, to create the McDonnell Douglas F-15 Eagle. This twin-engine tactical fighter aircraft can fly in all weather systems. Back in the late sixties, the UAF reviewed a slew of proposals from leading defense manufacturers for a dedicated air superiority fighter. 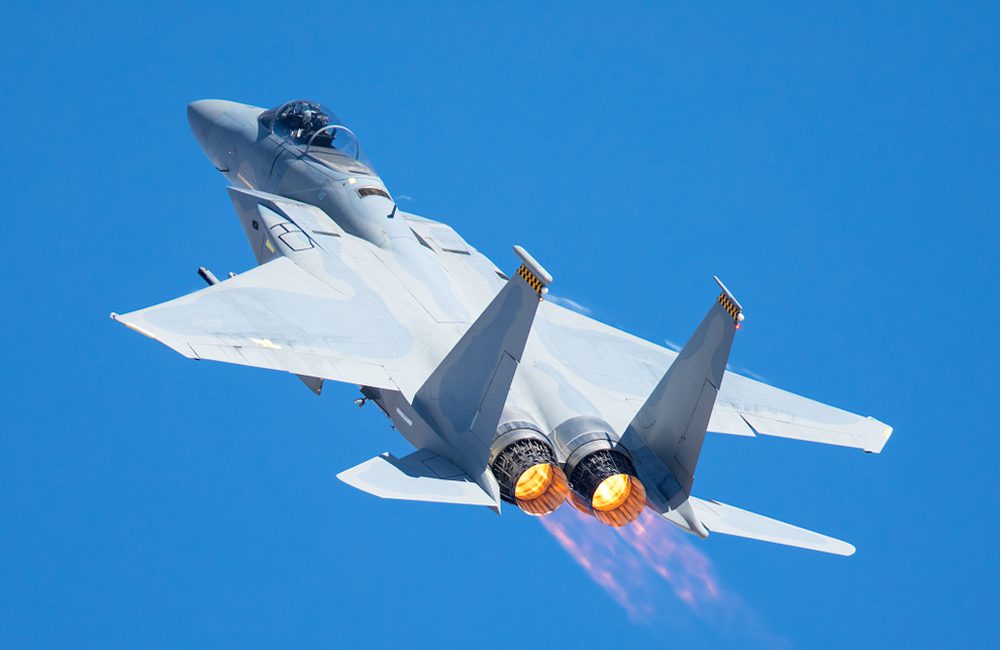 It chose the Boeing Co design. The design took five years (from 1967 until 1972) to implement. The F-15 Eagle is one of the world’s most successful modern jet fighters, with more than 100 victories and zero losses in aerial combat. The F-15 Eagle is a favorite of not only the USAF, but also the Israeli Air Force.

Another Boeing plane is the C-17 Globemaster III. The Globemaster III was designed by Boeing’s McDonnell Douglas subsidiary. This large, military transport aircraft had its first flight in 1991, and it was introduced to the USAF in 1995. The C-17 is commonly used for tactical airlift and strategical airlift missions. 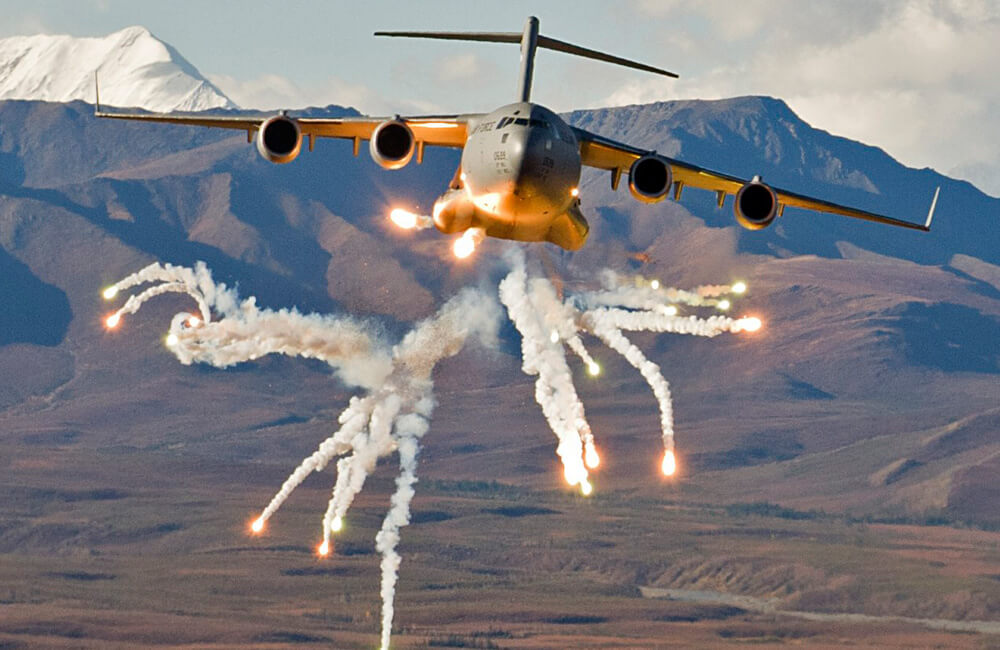 This Boeing Co plane transports troops and cargo around the world, and it also does airdrop and medical evacuation duties. The C-17 was made as the replacement for the Lockheed C-141 Starlifter. The C-17 also was designed to free up the C-5 fleet, leaving it to deal with outsize cargo.

The Lockheed Martin VH-71 Kestrel was manufactured in conjunction with AgustaWestland and Bell Helicopter. It had its first flight in 2007, but the project was canceled in 2009 because of the high cost ($13 billion for 28 Kestrels). The Lockheed Martin plane was initially made to replace the Marine One Presidential Transport Fleet. 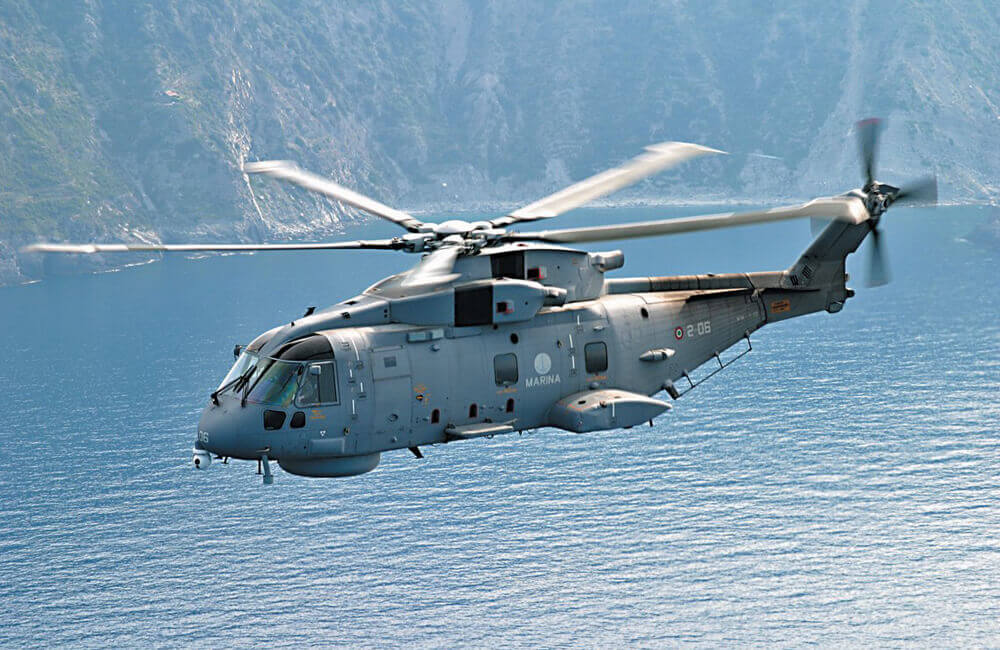 The USMC Martin One was marketed as the US101 before Lockheed Martin took over. Later, Lockheed argued, after cancelation, that the reason the price was so high was because the government kept demanding unanticipated and excessive modifications, none of which were present in the initial RFP.

The Chengdu J-20 is used by the People’s Liberation Army Airforce. There have been fifty built so far by the Chengdu Aerospace Corporation, and it is designed for air superiority. The J-20 has precision strike capability, and it had its first flight in 2011. It was introduced six years later. 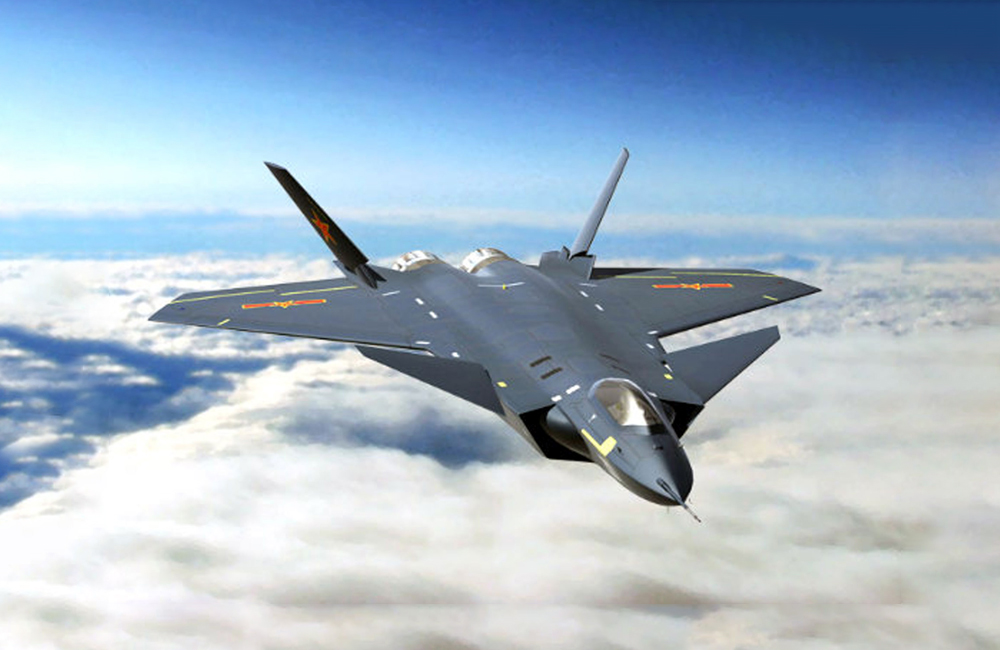 The J-20’s origins can be traced back to the J-XX Program from the nineties. The started combat training in 2017 and the first combat unit consisting of all J-20s was formed in the early spring of 2018. It is the world’s third fifth-gen stealth fighter, following the F-22 and F-35.

The F-16 Fighting Falcon, made by General Dynamics, is a supersonic, single-engine multi-role fighter jet that was developed for the USAF. Originally, it was made as an air superiority day fighter, but it would later evolve into an all-weather multirole aircraft. General Dynamics Corp has made 4,600 F-16s since the U.S. approved production in 1976. 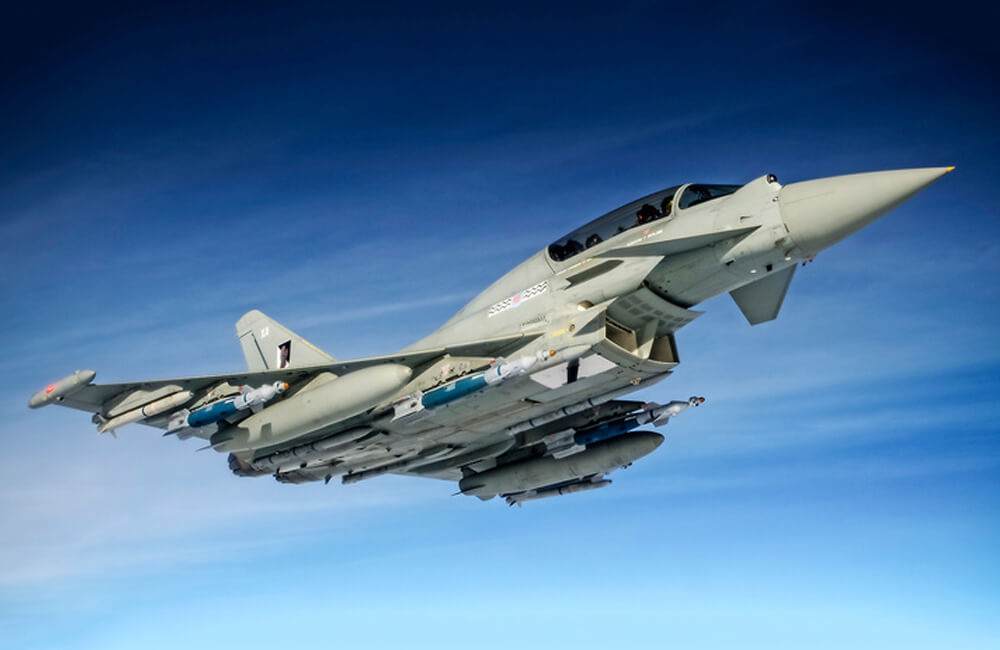 The F-16 Fighting Falcon’s most well-known feature is its frameless bubble canopy, which gives the pilot better visibility. There is also an ejection seat that is reclined 30 degrees to reduce G-Forces on the pilot. The F-16 has eleven different locations from which to mount weapons and other equipment.

This single-seat, all-weather, twin-engine stealth fighter was made for the USAF, and it was the result of the ATF (Advanced Tactical Fighter) program. The F-22 Raptor was initially made as an air superiority jet, but it also has signal intelligence, ground attack, and electronic warfare capabilities. 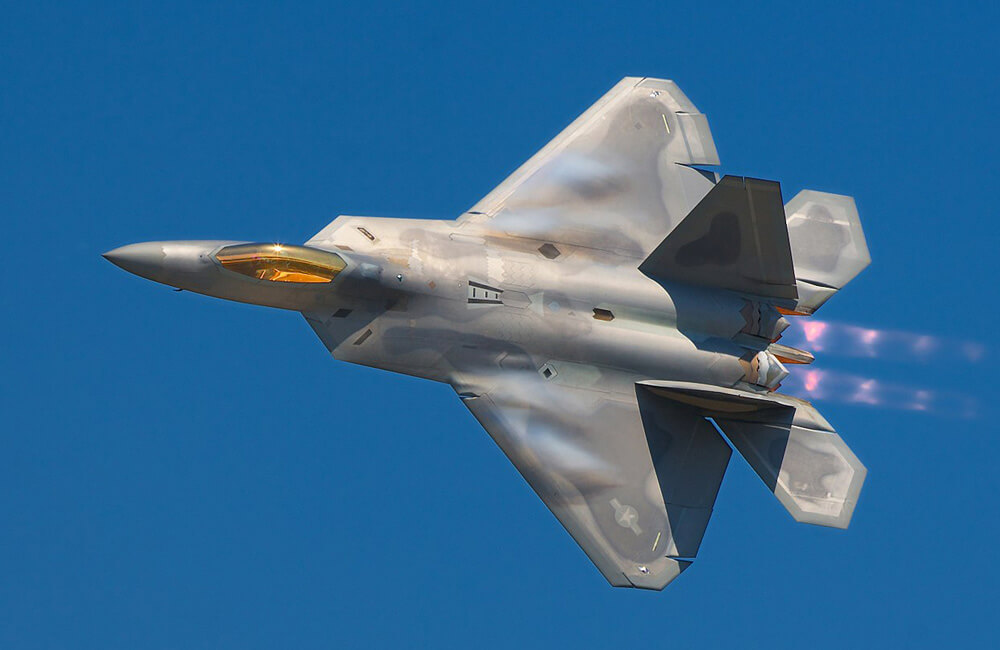 Lockheed Martin Corp was the primary contract, but Boeing Co. contributed the aft fuselage, avionics, training system, and wings. The F-22, according to USAF officials, is a “critical component” of the branch’s tactical power. 195 have been made, of which 187 are operational. The program shut down in 2011 because the F-35 was developed (among other reasons). 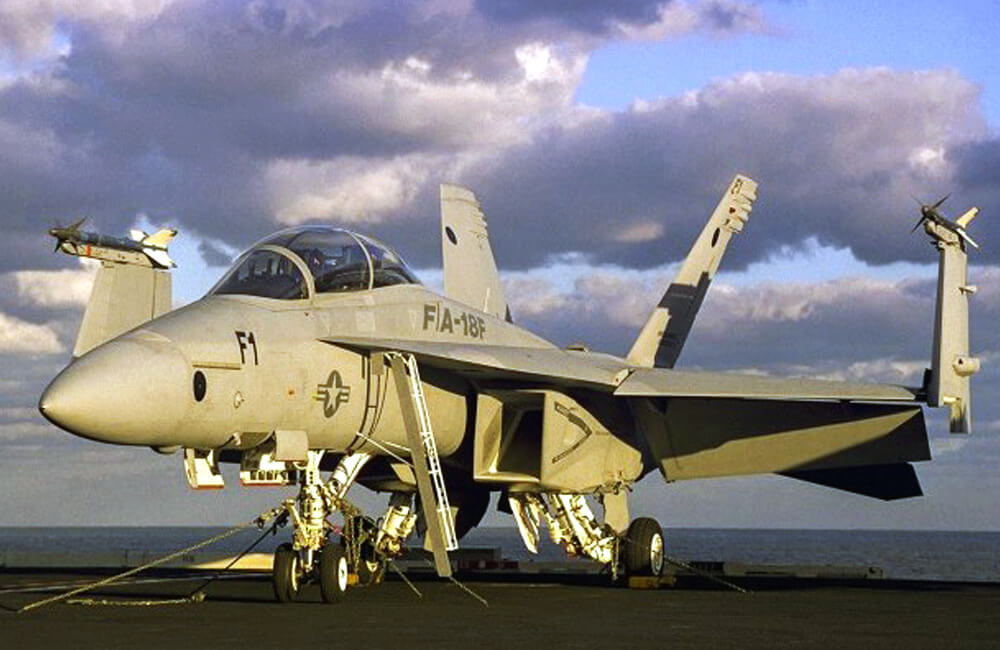 The Blue Angels, which are the Flight Demonstration Squadron of the Navy, are now the most well-known branch associated with the Hornet. The Hornet is somewhat of a jack of all trades. Boeing Co designed it to perform fleet air defense, enemy air defense suppression, fighter escort, interdiction, reconnaissance, close air support, and more.

The Sukhoi Su-34 is a twin-engine, all-weather, supersonic fighter jet. The bomber first flew in 1990, and it was built for the Soviet Union. It didn’t enter service until 2014, where it served with the Russian Air Force. The NATO reporting name for the Su-34 is “Fullback. Designed by , the Su-34 flies both solo and group missions. 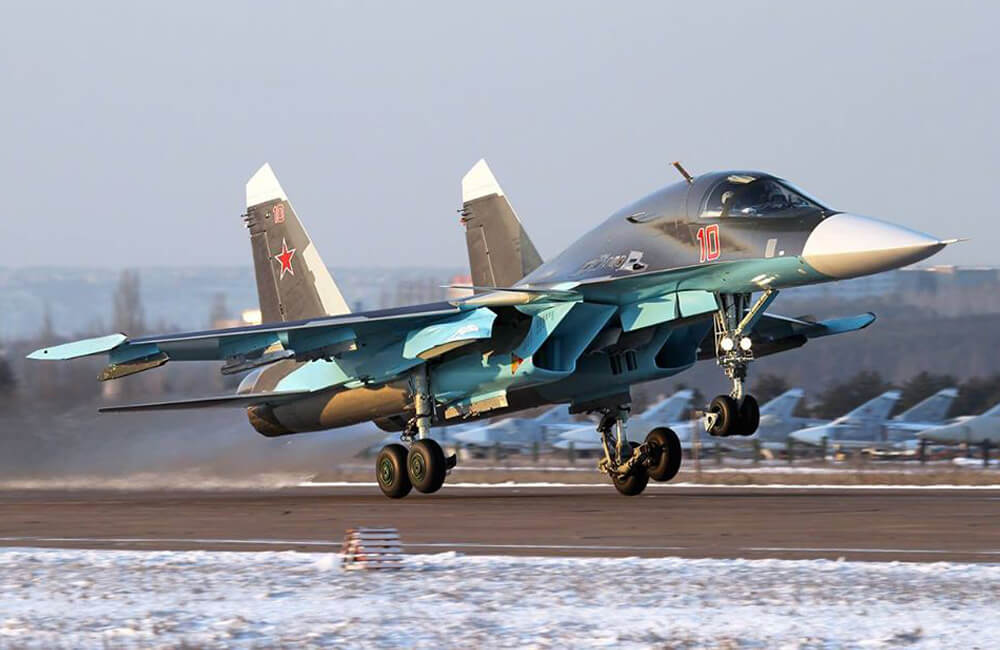 It can fly in the daytime or nighttime, and it is used mainly in hostile environments, which it is well-built for, as it is equipped with counter-fire, aerial reconnaissance, and electronic warfare capacity. The Su-34 is expected to replace the S-24 and Tu-22M3.