TSA has some pretty strict rules about what you can bring on a plane, right down to the amount of liquids in your cabin bag. Seasoned flyers are well aware of these rules by now and it’s understandable that new flyers could make basic mistakes.

However, some people love to push the boundaries when it comes to these things, and somehow think they can sneak ridiculous or even dangerous items or even living things past TSA. This can result in legal consequences that can end up costing more than the flight and the restricted item combined.

Some of the items found by the TSA are so rare and obscure that they don’t even appear on their “What Can I Bring?” list. However, that doesn’t mean you should risk it anyway. This passenger was stopped when an authentic, antique cannon barrel was discovered in their carry-on luggage and left security with several questions. 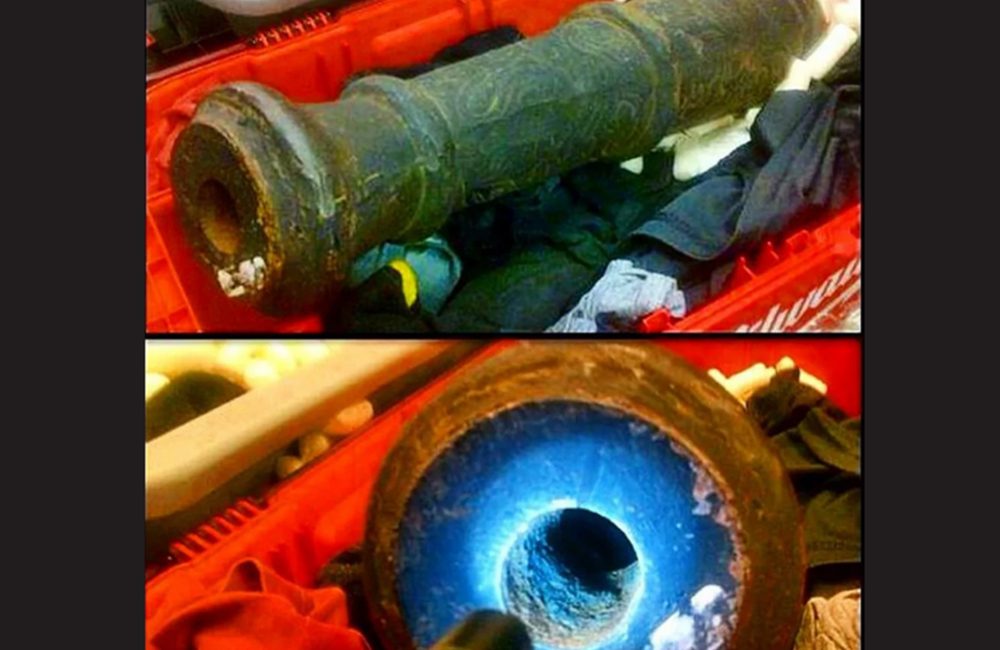 The cannon was confiscated from the passenger who was allowed to proceed with their flight, but why they decided to bring a cannon barrel and how they thought they could get away with it remains a mystery.

In 2012, a passenger flying from Miami to Maracaibo thought they were in the clear when they decided to transport their unusual cargo in their check-in bags. However, their luggage was flagged by TSA and when they inspected the suitcase, they discovered no fewer than 185 live tropical fish and invertebrates. 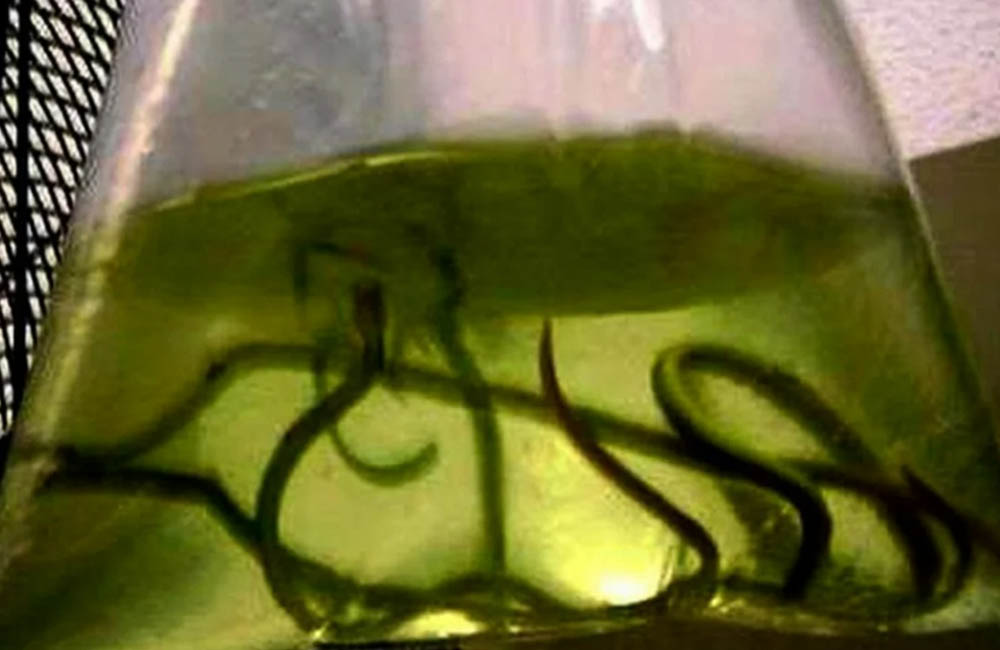 This included a bag of eels precariously stored in a water-filled plastic bag, much like the kind you’d find goldfish swimming in at a county fair. The passenger was apprehended by TSA and voluntarily handed all of their cargo over to the U.S. Fish and Wildlife Services, who saw that all the creatures were adequately cared for.

November 2014 was a busy month for TSA officers at Albany International Airport, who picked up so many strange and sometimes illegal items that they were compelled to write an article about it. On top of knives, brass knuckles, and even drills, they collected one item that seems almost too ridiculous: a chainsaw. 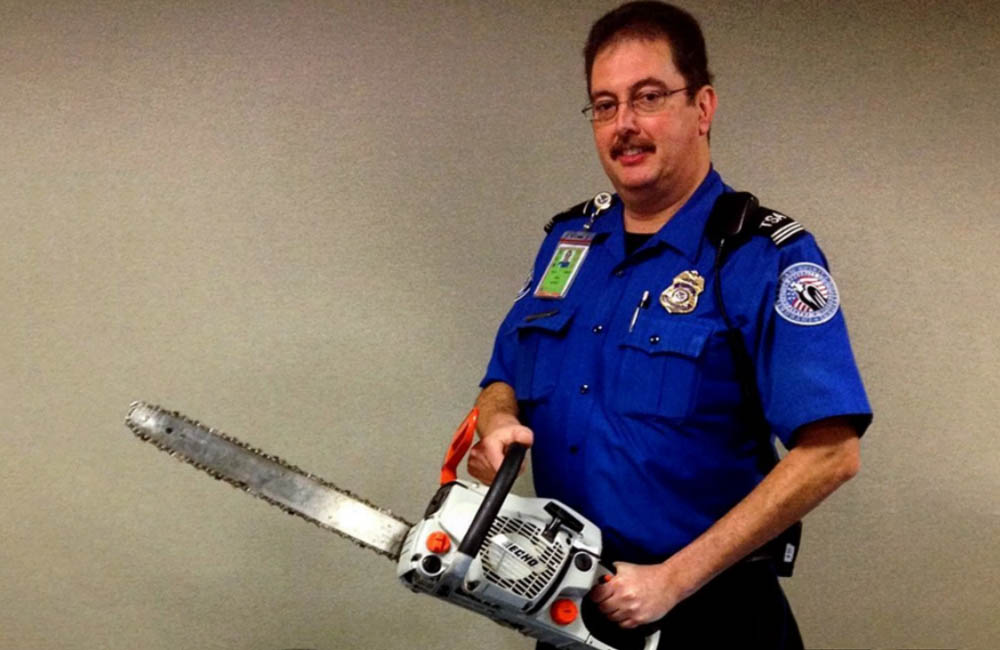 According to officers, the chainsaw was surrendered at security after the passenger admitted to having it in their carry-on luggage. It hasn’t been revealed what the passenger planned to do with the chainsaw, or what legal action was taken against them, but the chainsaw has been kept by the DSA as an example of just how extreme some of these finds can be.

In 2013, two women were traveling home from a vacation in Cuba when one of their bags was flagged by the TSA. They were horrified to discover that inside a pot one of the passengers purchased as a souvenir, were parts of a human skull. The police were called to the scene immediately but quickly ruled off either passenger as suspects in a homicide after speaking with them. 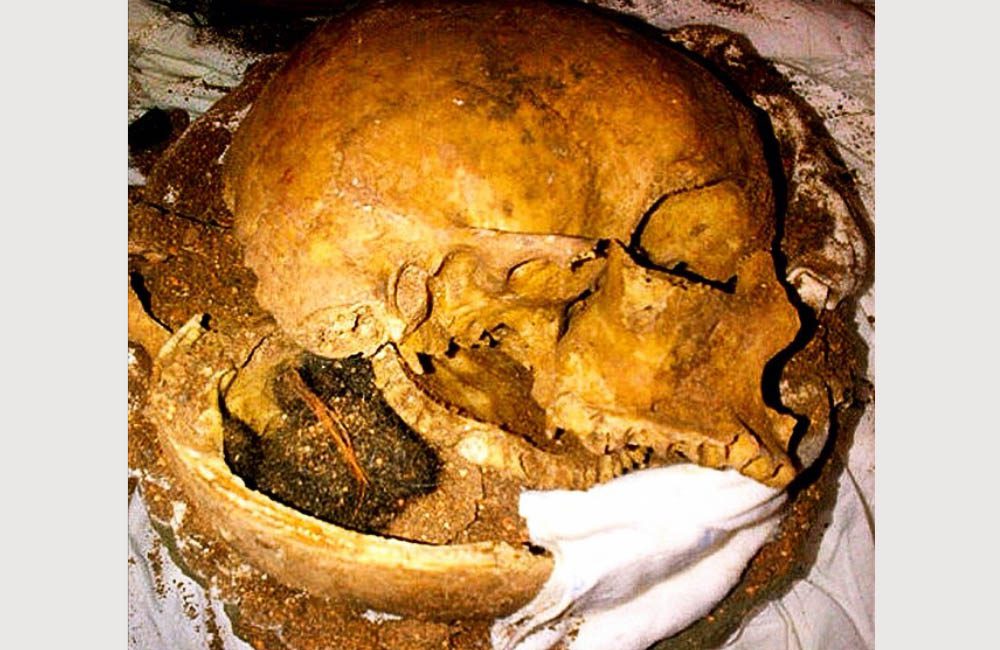 It was clear that neither of them knew the pot contained the skull fragments and when they purchased the pot from a street vendor, they were actually told it would ward off evil spirits. The case was handed over to Homeland Security and the pot was given to the Broward Medical Examiner’s Office for testing.

This is another case where the passenger may have gotten away with this if they’d checked the liquid capacity for carry-on luggage. In 2016, the TSA confiscated what they thought was just an oversized bottle of liquor but were surprised to see something floating inside of it. 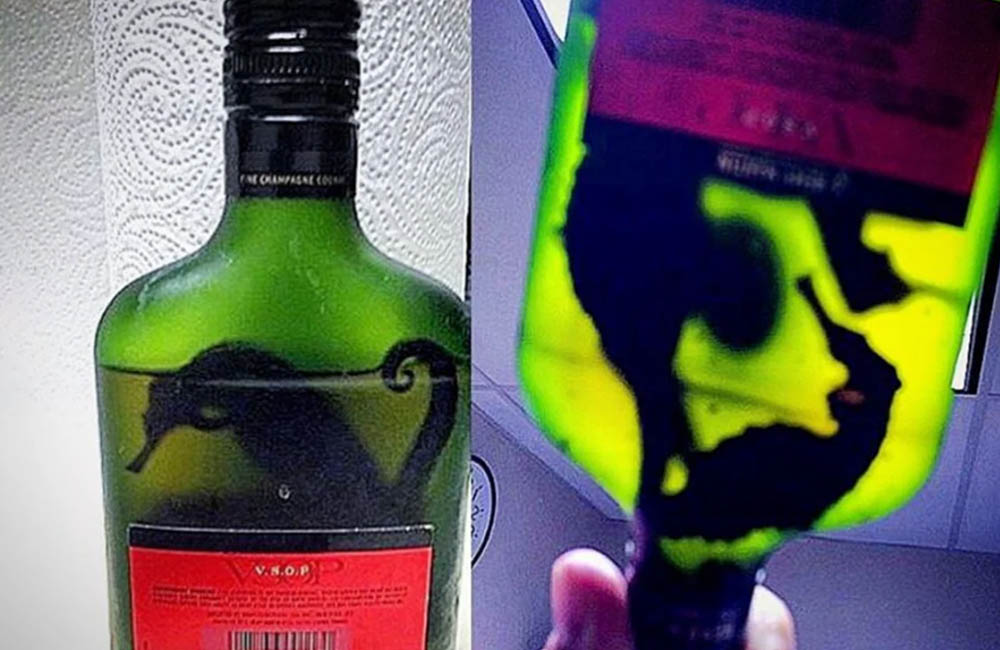 It turned out that the passenger was trying to smuggle a handful of sadly deceased, endangered seahorses inside the liquor bottle. There were five seahorses in total and it’s unclear where the passenger obtained them or why they tried to transport them in the bottle. The passenger was removed from the flight and the bottle was given to Michigan Fish and Game, so they could identify the species of seahorse and dispose of them properly.

According to reports, passengers at Spokane International Airport are some of the worst offenders when it comes to trying to smuggle weapons onto their flights. In 2017, TSA confiscated 26 loaded, unauthorized firearms from passengers trying to bring their weapons through security. 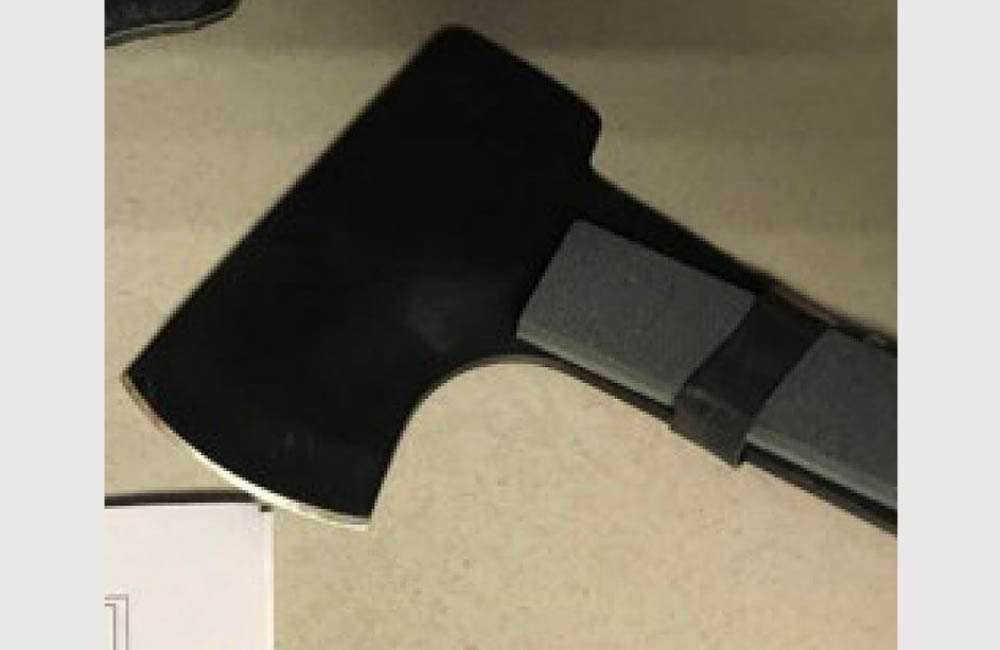 Firearms, especially loaded, are not permitted in carry-on luggage unless pre-approved. For some unknown reason, a passenger tried to bring two throwing knives with them through security. The knives were unsecured in their carry-on luggage and hadn’t been pre-approved beforehand. They were promptly confiscated from the passenger and a tweet had to be issued, asking passengers not to store weapons in their carry-on bags.

Interestingly, the issue with this confiscated item wasn’t the shark, but the amount of liquid it came in. The TSA permits flyers to transport live fish as long as they and their liquid contents are pre-screened and approved before they’re allowed onto the plane. However, this passenger didn’t take any of those steps when they tried to bring a dead baby shark onto their flight with them. 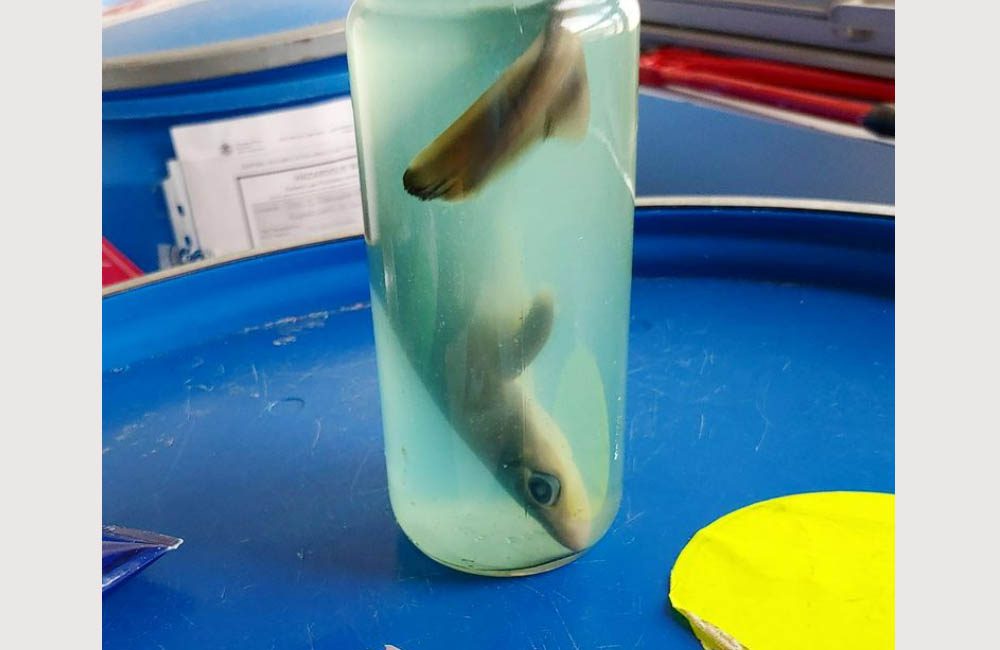 The main issue was surrounding the liquid the shark was being kept in. It was in an unknown chemical preserving the shark that TSA couldn’t identify and approve on the spot. Also, there was far too much liquid. Typically, any fluids being taken onto a plane should be 3.4 ounces, anything higher than that has to be stored in check-in luggage or pre-approved.

It’s well known that the words “explosives” and “airport” aren’t a great mix and it’s for that reason that TSA takes any potential bomb threats extremely seriously. In 2015, a 15-year-old passenger was charged after bringing what looked to be an explosive device into Toronto Pearson Airport. 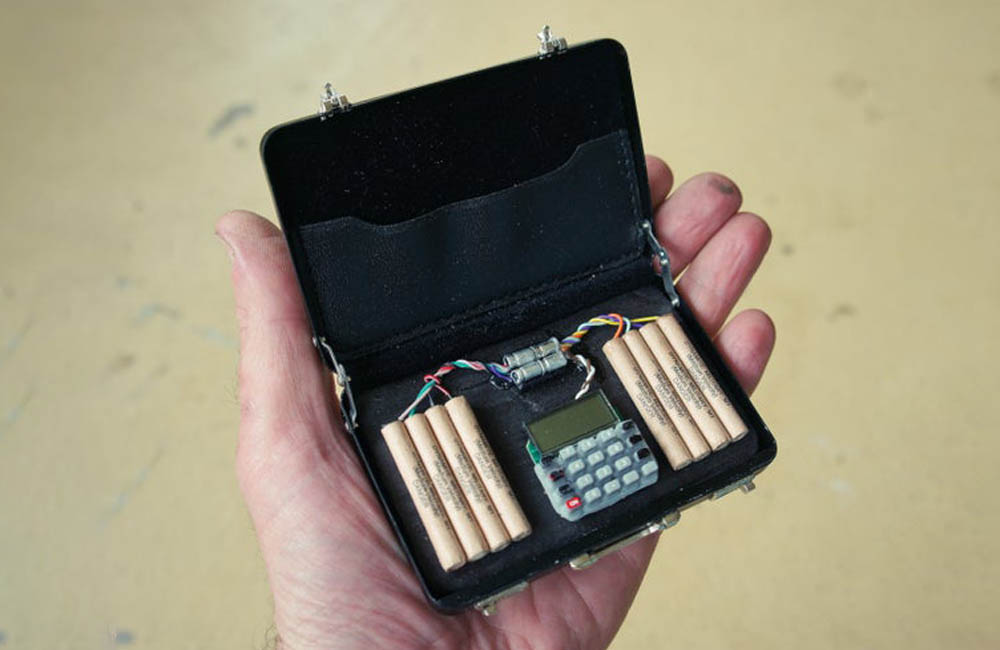 When the device was detected in security, a bomb disposal unit was called to the scene. Thankfully, upon further inspection, they discovered that the alleged explosive was a novelty prank. The teenager had smuggled in a fake bunch of dynamite tied to a digital clock with a timer, simulating a very real threat that TSA is constantly on the lookout for. The teenager had the fake bomb confiscated and he was charged with mischief.

An assault rifle, along with loaded magazines and several rounds of ammunition, were discovered in the suitcase of a woman from New Jersey. She attempted to conceal the weapon by hiding it inside the lining of her suitcase, however, this wasn’t enough to get it through TSA unchecked. 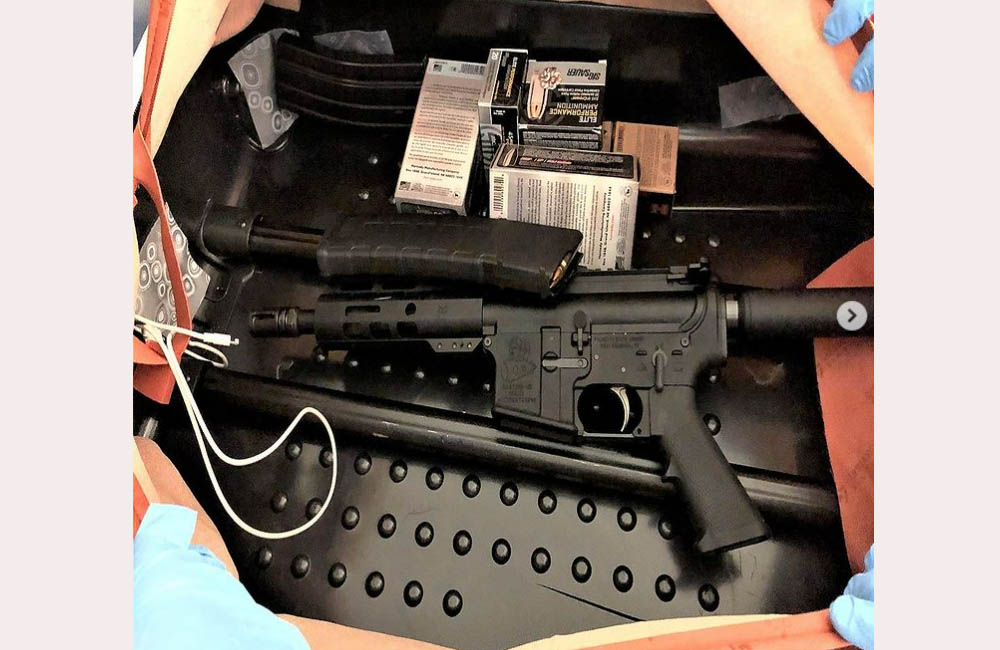 The owner of the suitcase, along with her traveling companion, was tracked down by TSA officers after the discovery was made and both were arrested. It’s unclear why the passenger was trying to transport the weapon, along with so much ammunition, but officials praised the officers for finding the weapon, as it was carefully concealed.

The individual trying to transport this 2-foot long machete through Bradley International completely confused airport staff when they tried to bring the knife in their carry-on luggage. Sharp objects of any kind are prohibited in carry-on luggage, however, they can be transported in check-in bags. 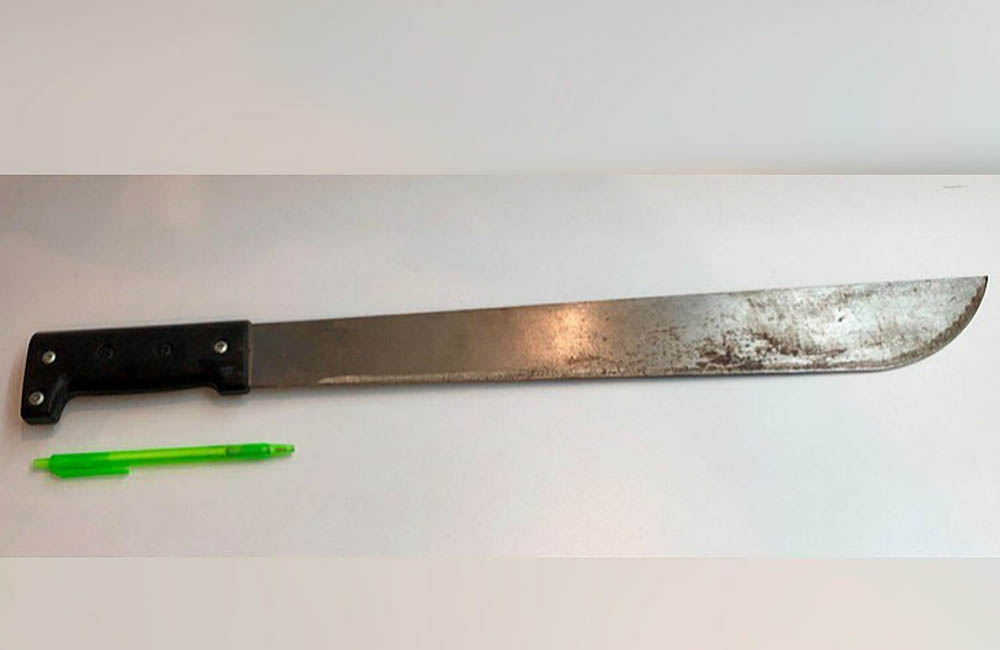 The individual was given the option to put the machete into their check-in bag or hand it over to TSA – they chose the latter. According to Lisa Farbstein, a spokesperson for TSA, small knives and bottle openers are their most commonly confiscated items. She stressed that most hotels supply bottle openers and it isn’t worth trying to smuggle one onto a flight.

The TSA Instagram account called this attempt at bringing an ax through security un-ax-ceptable. It’s understandable why someone may try to bring a firearm or a small knife through security if they’re used to carrying them around for protection, but less so with a throwing ax. With little explanation as to why the passenger would need to bring an ax in their carry-on bag, it was quickly confiscated. 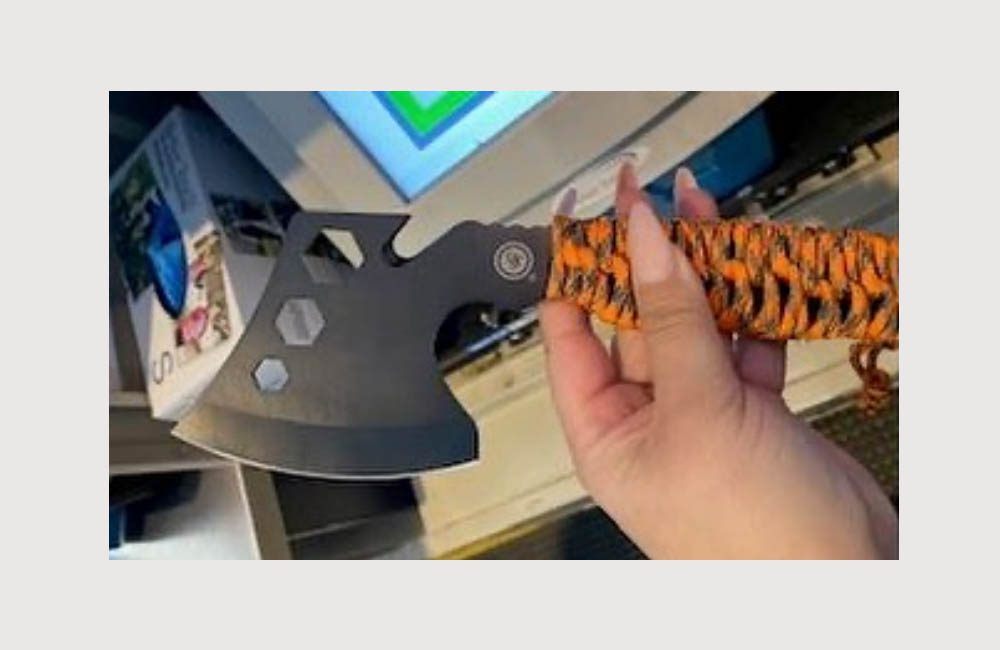 The TSA took this opportunity to remind passengers to take a look at their list of approved carry-on items on their website. While this list doesn’t allow axes in any capacity in carry-on luggage, you can bring antlers, remote-controlled cars, and even a sewing machine.

This passenger flying from Kahului in 2012 was flagged by TSA after they discovered an antique cannonball and flare gun in their carry-on luggage. After publishing the find on their Instagram account, many questions arose from those in the comments. 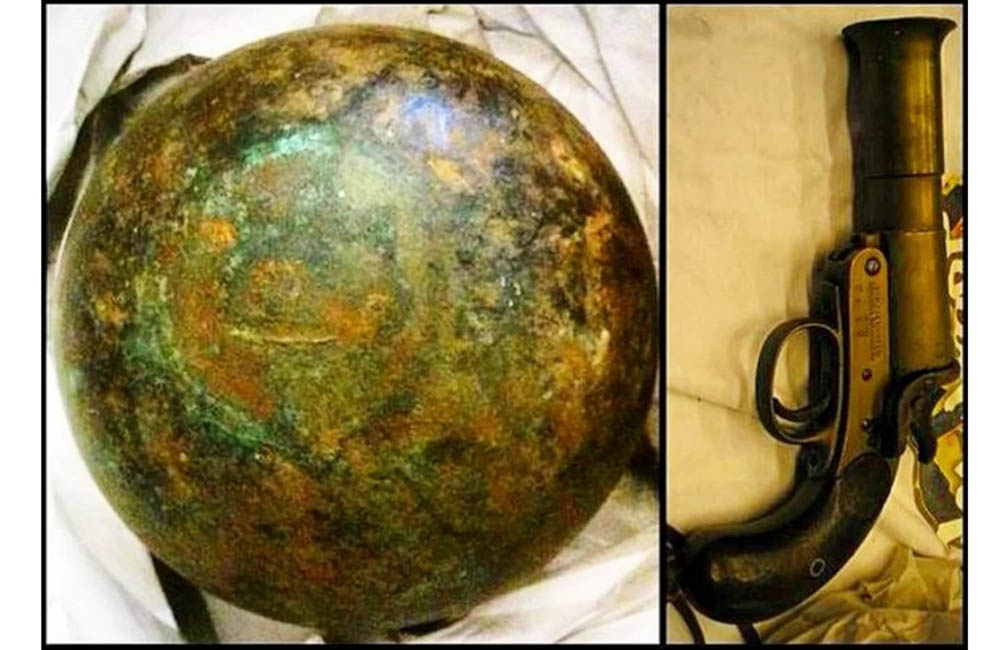 Firstly, how did the passenger think they could bring through two items that almost certainly would have exceeded the baggage allowance? Also, why were these items seized? Flare guns are banned entirely on flights, even in check-in bags, as they pose a fire hazard. Cannonballs aren’t even mentioned on the TSA list, assuming they never expected to have to deal with one. Since cannonballs are heavy and known to cause a great deal of damage, that’s likely that’s the reason why this one was taken.

After arriving in Melbourne on a flight from Singapore, the TSA noticed one passenger acting strangely and decided to search her. They were shocked to discover that underneath her skirt, the passenger was wearing an apron that held 15 bags containing 51 live tropical fish. 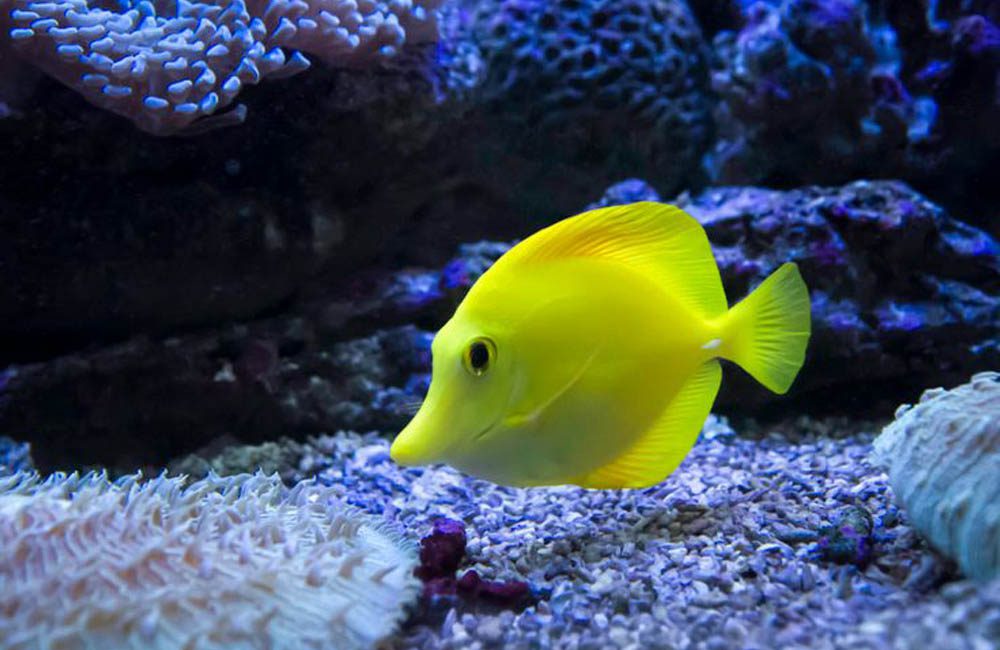 The main concern was what species of fish the woman was carrying, as releasing them into Australian waters may decimate species native to Australia. This also brought into question the quality of the security measures at the airport the passenger arrived from, as she’d managed to make it through the whole flight without anyone noticing.

Some passengers may not realize that when the TSA says explosives aren’t allowed on board flights, they mean even the tiniest explosives too. In July 2020, numerous passengers were caught trying to smuggle at least $100 worth of fireworks and firecrackers onto their flights. 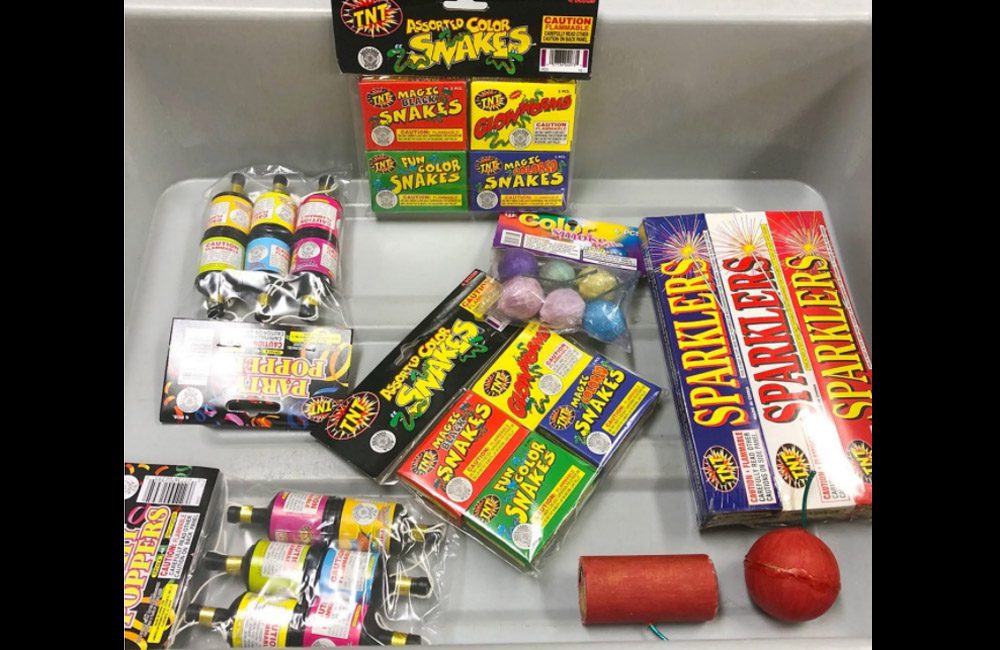 In the run-up to the 4th of July, the TSA always sees a sharp increase in the number of passengers trying to take fireworks onboard flights, from sparklers to rockets. As they pose such a threat to other passengers, the crew, and the plane itself, fireworks aren’t even allowed to be taken in check-in bags. If one were to be faulty and explode during the flight, it would have catastrophic results.