The ocean is a vast space that covers most of the globe. Long before airplanes were flying around the world, ships were the only way to travel. For many, taking a job on a vessel was like playing Russian Roulette – but it could be incredibly lucrative.

Not every schooner made it home, sinking to the bottom of the beautiful briny sea and taking all sorts of untold treasure along with it. However, lost treasures aren’t just limited to old-fashioned boats and pirates. There are billions in Nazi gold lying in a lake in the Alps if legends are to be believed, along with much more…

This mysterious pyramid, which some are called the “sunken Atlantis pyramid,” is one of the more unusual undersea treasures on this list. The Portuguese Pyramid is 197 feet tall, with a base of 86,111 square feet. The massive structure was discovered by someone sailing off the coast of the Azores Islands of Portugal. 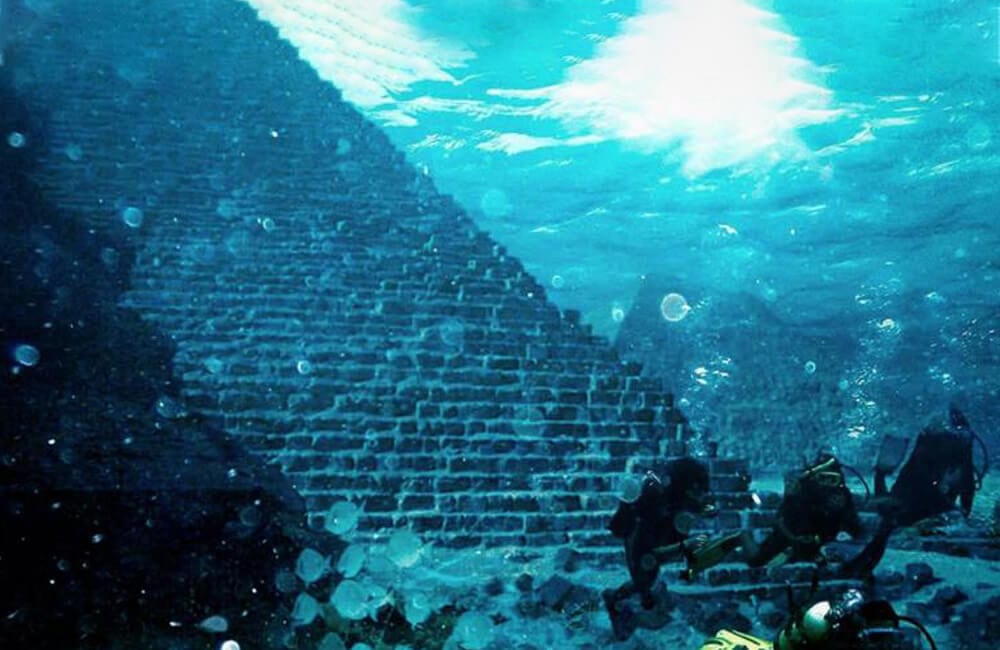 The sailor had been looking for good fishing grounds, but, instead, he found a huge pyramid. The Portuguese Navy was called to investigate. The current theory is that it was built before the last Ice Age in the northern hemisphere. When the glaciers melted, the pyramid was covered. As more exploration and research is conducted, there will likely be new discoveries about this strange structure.

While finding gold is all well and good, it’s not very often that explorers can say they’ve found what could be the world’s first analog computer. This monumental discovery first made the news all the way back in 1900. To this day, no one is entirely sure what the Ancient Greek device actually does. 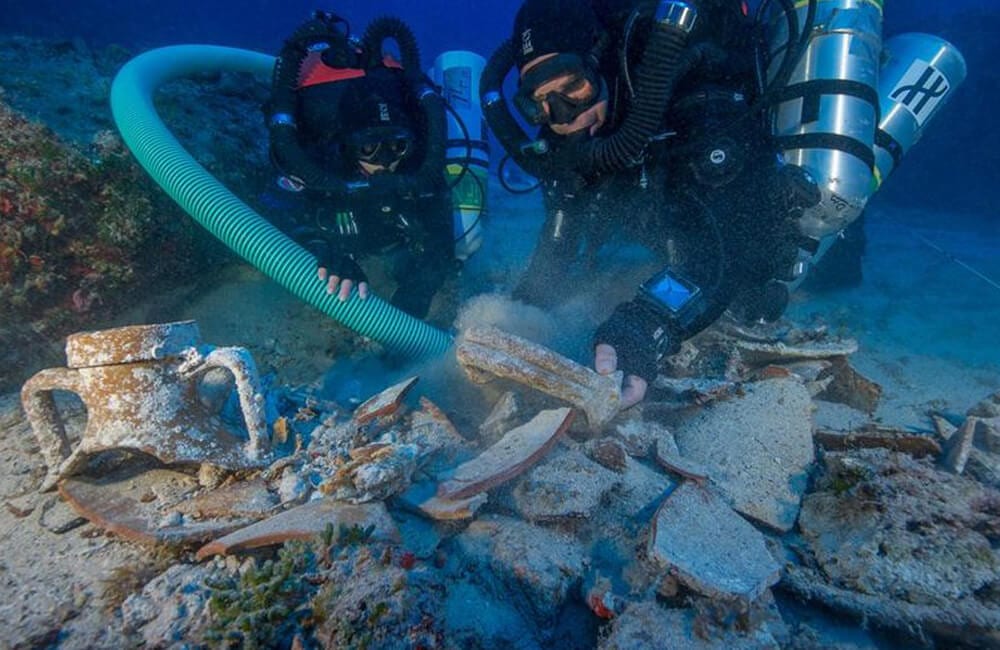 There are plenty of theories, including the idea that it’s made to track the sun and the moon. The mechanism itself was part of a much bigger haul from The Antikythera wreck. Tons of interesting items were found, from bronze sculptures to ceramics and everything in between. Everyone from YouTubers to documentary makers are fascinated by the entire discovery.

The more years that pass, the less likely it is that shipwrecks will be found. Or, that’s what popular belief dictates. However, there have been many cases of centuries-old vessels being discovered. Case and point: The Belitung. This incredible find hit headlines in 1998. 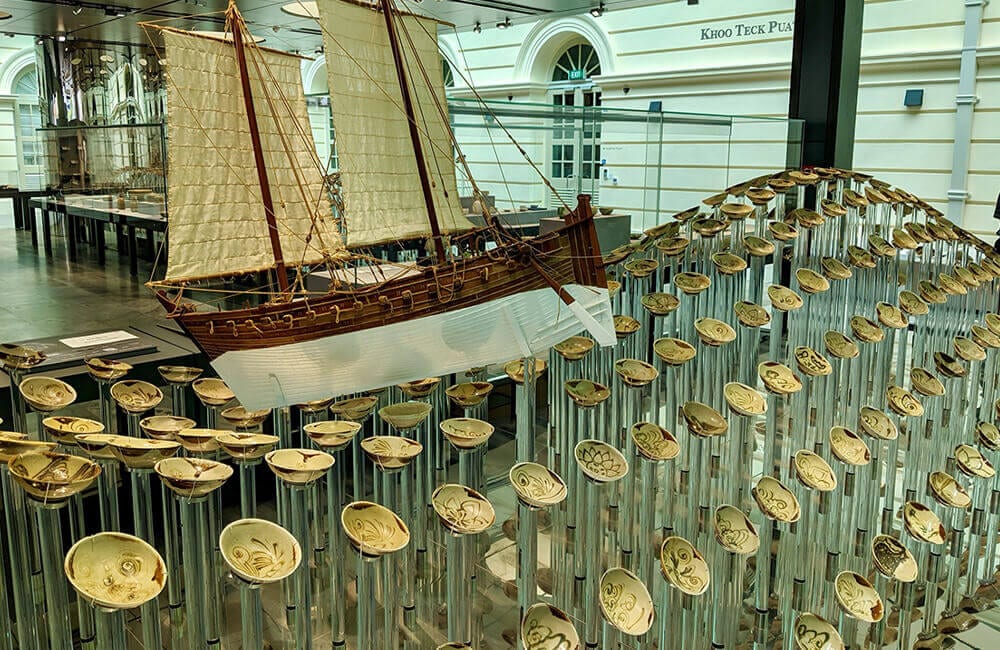 The 9th-century ship sank while on a trade mission between China and the Middle East. While there wasn’t a hold full of gold, the artifacts on board were still very notable, including tons of items dating back to the Chinese Tang Dynasty that came in at a value of over $32 million.

When one ship sinks it’s bad enough, but when an entire treasure-carrying fleet sinks? There would have been a lot of cussing that day. Back in 1715, an entire Spanish fleet of almost a dozen ships sailed straight into a hurricane near Florida. 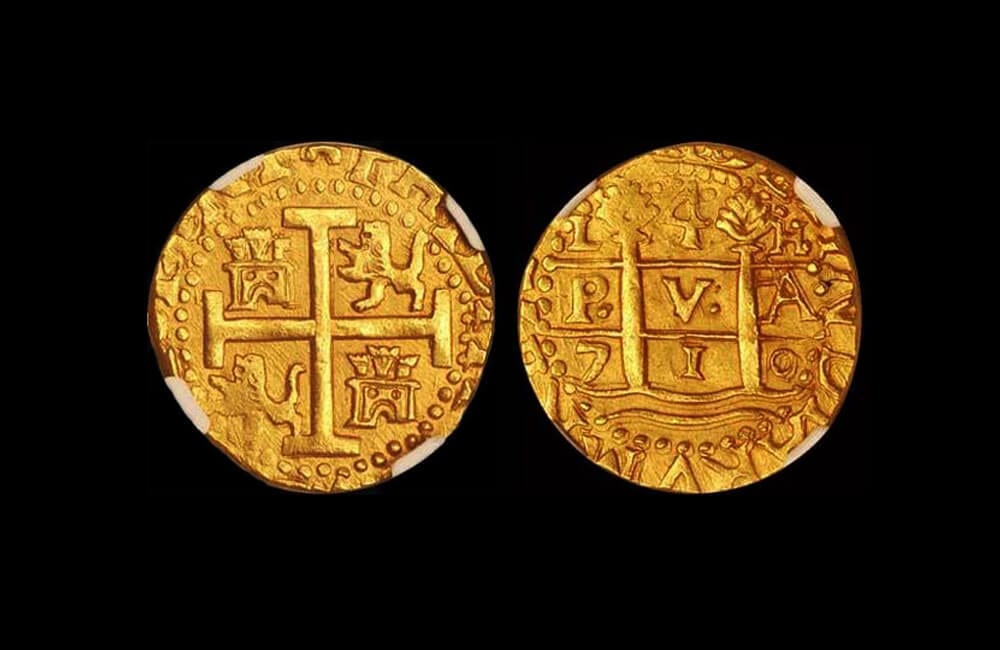 As you might have guessed, the treasure and the ships were lost. Florida residents have been benefiting from this tragedy for years as remnants of the forgotten gold have been known to wash up on the shores. Although some of the treasure has been recovered, it’s thought that around $200 million is still laying in the depths.

The North Carolina sank to the depths in 1840, but it wasn’t just any old steamship. It was loaded with gold. While the wreck itself was found earlier, in 2019 divers to the site started to find gold coins that were worth tens of millions of dollars. 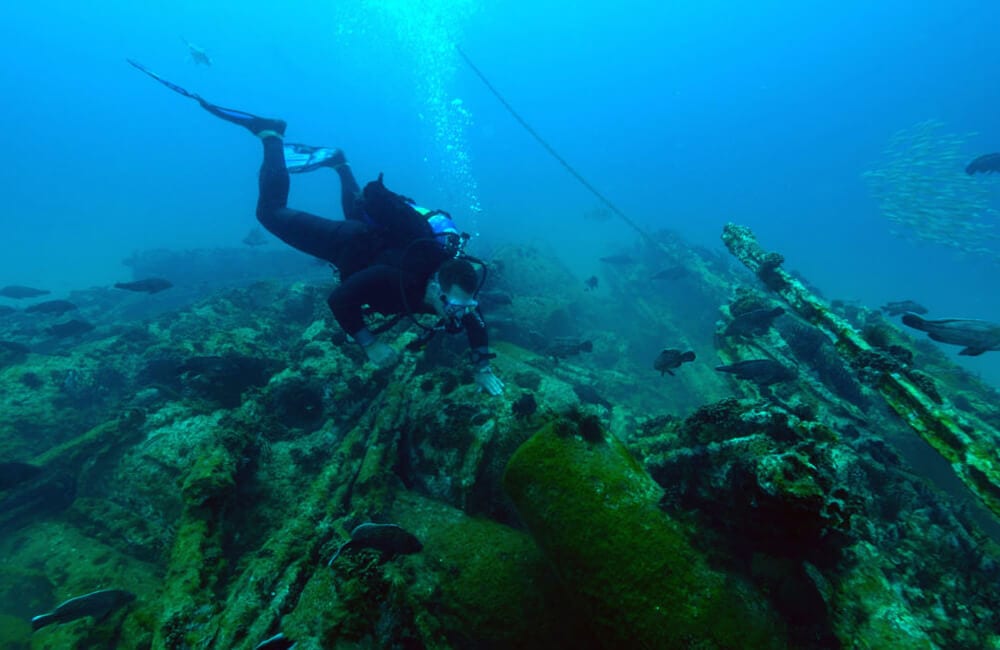 It was such a shock to everyone involved that it made headline news. At the time of the ship’s sinking, one passenger alone claimed he lost $15,000. At the time, that was a considerable amount in today’s money. The wreck continues to be a point of interest to many keen divers, for obvious reasons.

There are many different treasures that have been lost at sea over the years, but few are quite so fascinating as the wreck of The San Miguel. The famous vessel was carrying tons of Inca and Aztec treasures from Mexico to different territories when it encountered trouble and sank in 1551.

While the crew managed to escape the sinking vessel and survive, the cargo of treasure was lost to the murky depths of the ocean. To this day, The San Miguel has never been found, although plenty of divers have searched the waters near Santo Domingo. If it’s ever discovered, the lucky finder could become as rich as Amazon’s Jeff Bezos.

It goes without saying that World War 2 was a tumultuous time for many countries. The Nazi’s not only invaded countries, but they also took treasures from cities and towns alike. Rumor has it that they even dumped over $5.6 billion in stolen gold into Lake Toplitz in the Alps in the ‘40s, planning on returning to it at a later date. 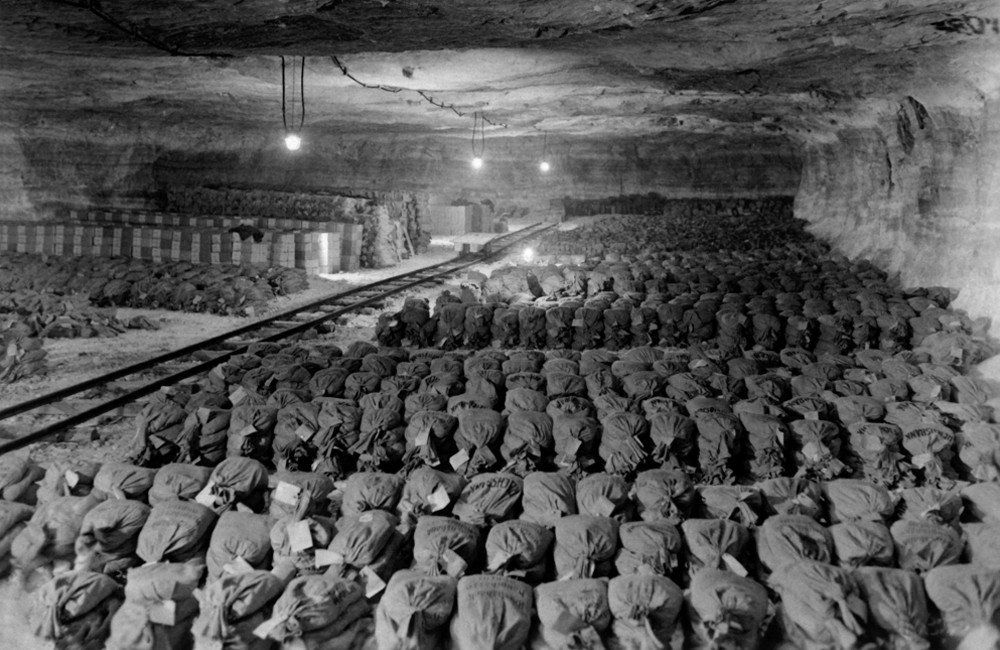 But, as we all know, they didn’t win the war and supposedly, the treasure remained there. Needless to say, countless divers have tried to locate the gold, but because of the 300-feet-deep waters which are also lined with layers of logs, nothing has been found. Yet.

China’s beautiful Qiandao Lake, also known as “Thousand Island Lake,” is a man-made, freshwater lake that was completed in 1959. The ancient city of Shi Cheng is far older, though it is submerged under the newer body of water. Shi Cheng was built between A.D. 25 and A.D. 200 during the Eastern Han Dynasty. 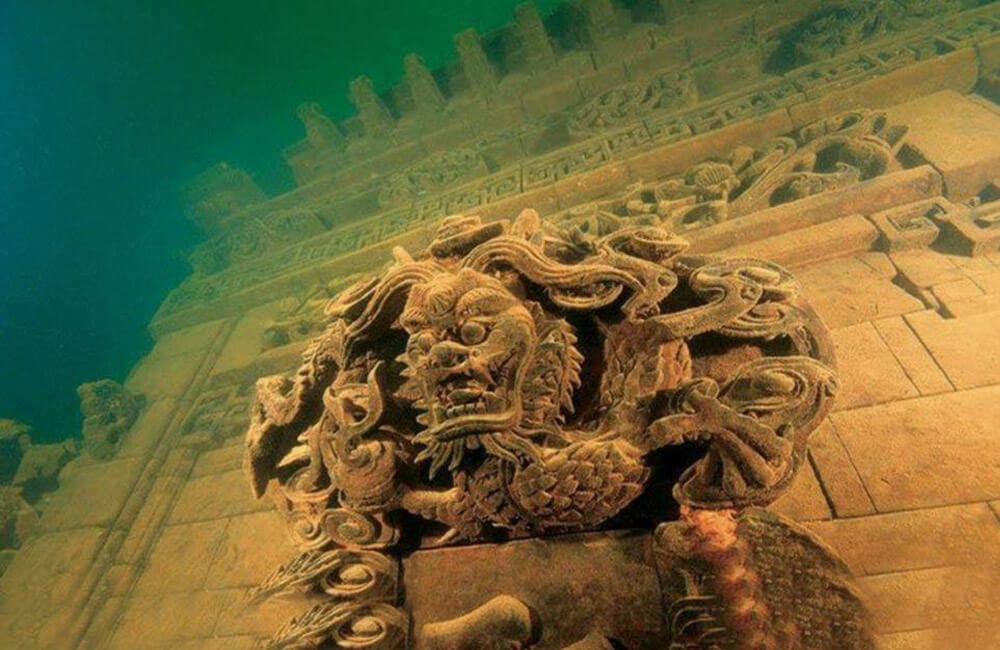 Shi Cheng was intentionally flooded after the city was abandoned over time. China wanted to design and build the Xin’an Dam, flooding the city to make way for Qiandao Lake. Because there were no corrosive agents in the water, this mysterious, Atlantis-like city has remained remarkably well-preserved, 131 feet below the surface of Qiandao.

The Uluburun (Turkish for “Grand Cape”) shipwreck is located off the coast of southwestern Turkey. The Uluburun wreck was rediscovered in 1982, and evidence provided from the ship’s cargo indicates that it set sail from Cypriot. It was sailing west of Cyprus, judging from her cargo, which included royal gifts, luxury items, and raw materials. 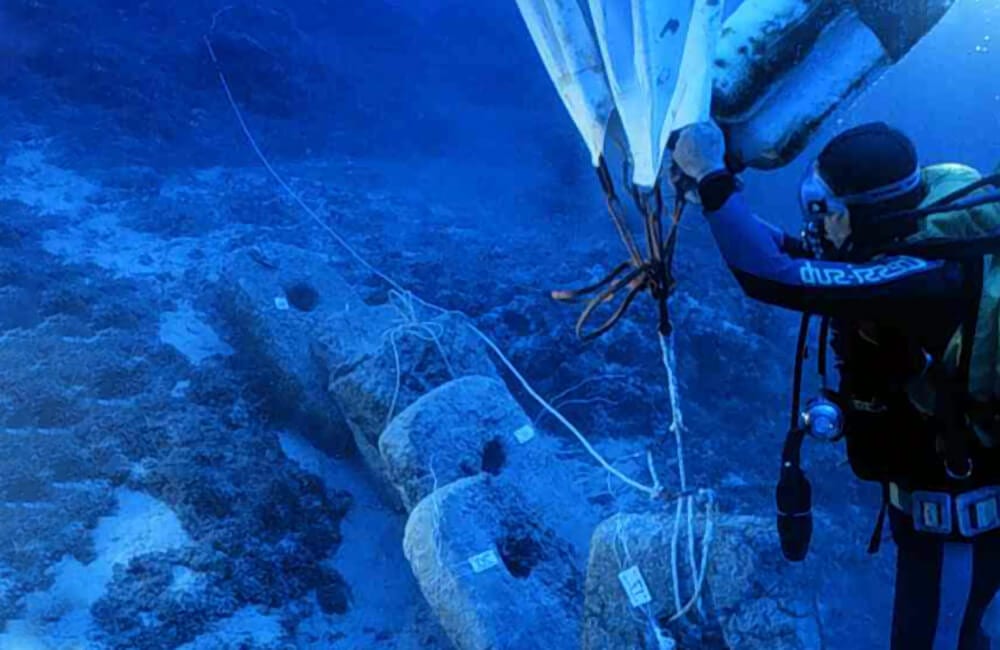 Interesting objects onboard included a gold scarab with Nefertiti’s name on it, one-hundred-seventy-five cobalt, lavender, and turquoise glass ingots, and a boxwood tablet with ivory hinges. The items onboard came from ten different cultures, and Turkey’s Bodrum Museum of Underwater Archaeology houses the treasures excavated thus far.

The lost city of Pavlopetri, located beneath the sea off the coast of Laconia in Greece, is one of the world’s oldest submerged lost cities. Pavlopetri is the oldest of its kind in the Mediterranean, and it is unique for its complete town plan, including tombs, streets, and buildings. Though the water has eroded the buildings over time, the town plan is still in place. 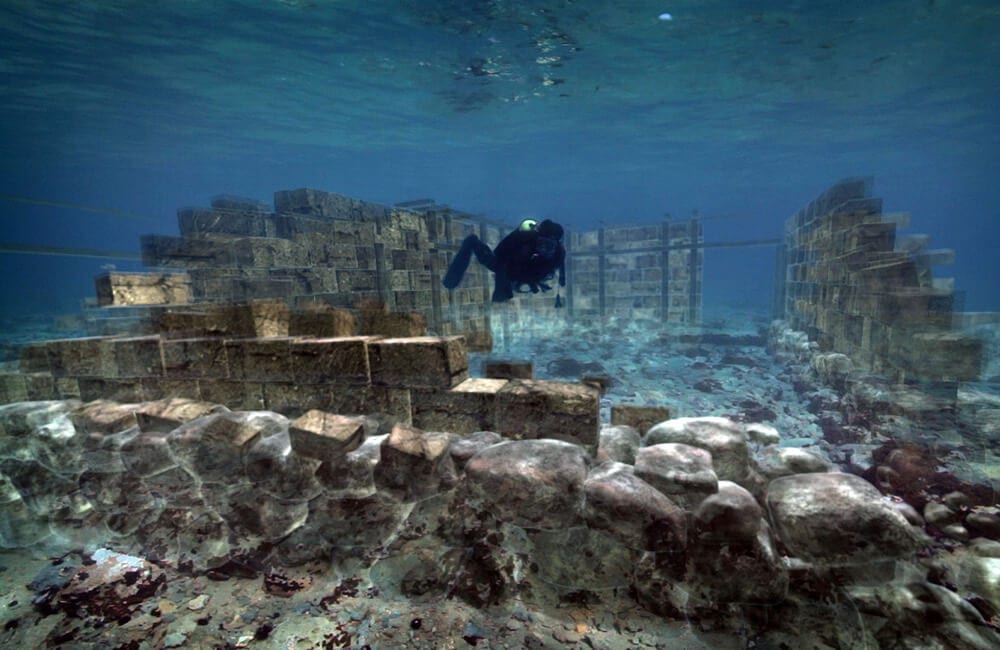 Pavlopetri sank in 1000 B.C. after suffering three major earthquakes. In 1967, Nicholas Flemming and a team of Cambridge University archaeologists discovered the lost city. Though UNESCO declared Pavlopetri as a Heritage Site, it is still under threat from thrill-seeking tourists trying to hunt for souvenirs.

Divers made an astonishing discovery a few years ago off the coast of the Bahamas, when they found a large stone statue resembling the Great Sphinx of Egypt, a structure that would have cost over $1 billion to build. James Neilson, who was part of the research team that investigated the divers’ discovery, said that the team was “not absolutely certain” what the “discovery mean[t].” 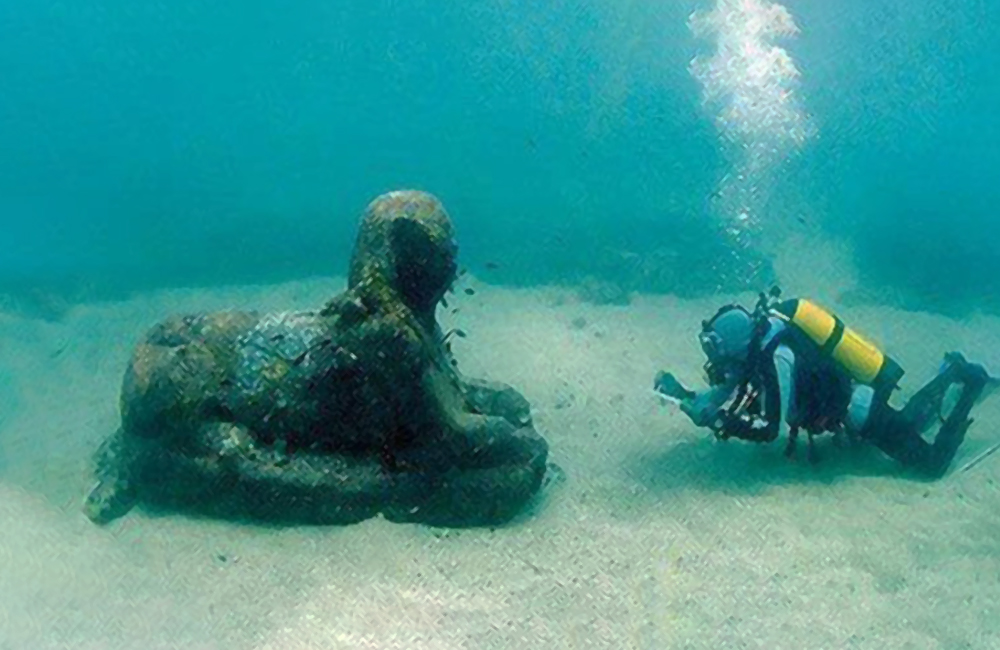 What Neilson’s team could determine was that the 3,000-pound basalt monument was of Egyptian origin. Neilson said that, though the Sphinx was eroded by corals and other life forms, the “nature of the mineral used” indicates that it came from Wadi Rahanu, an Egyptian quarry.  How it ended up underwater has yet to be determined.

It’s no secret that the map of the world has changed over the years. Cities that once stood on steady ground disappeared into the ocean thousands of years ago. Back in 2000, one such place was discovered in Egypt by Frank Goddio. It was the ancient city of Heracleion. 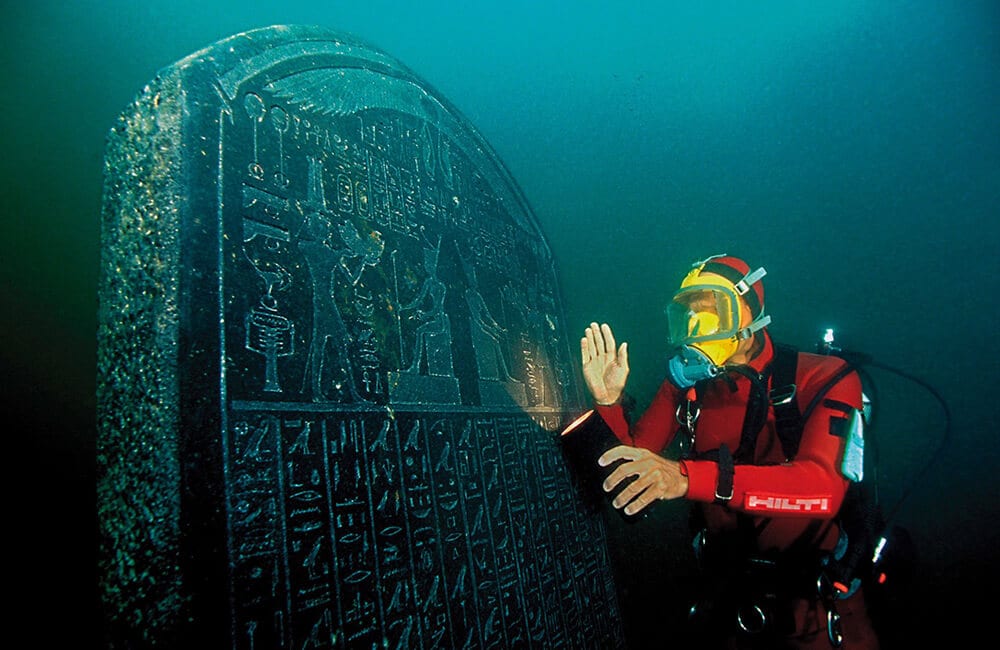 As you might imagine, the city was a huge discovery for historians. Archaeologists were able to pull priceless artifacts from the depths, including pottery, coins, and bog-standard treasure like gold and jewels. It’s impossible to put a price on a discovery this big, as it impacts the very course of history.

It’s not always old-fashioned sail-by-the-wind ships that fall prey to the sea. Steamships like The Pulaski aren’t impervious to harm, either. In 1838 there was an explosion on the ship while it was making passage off the coast of North Carolina. 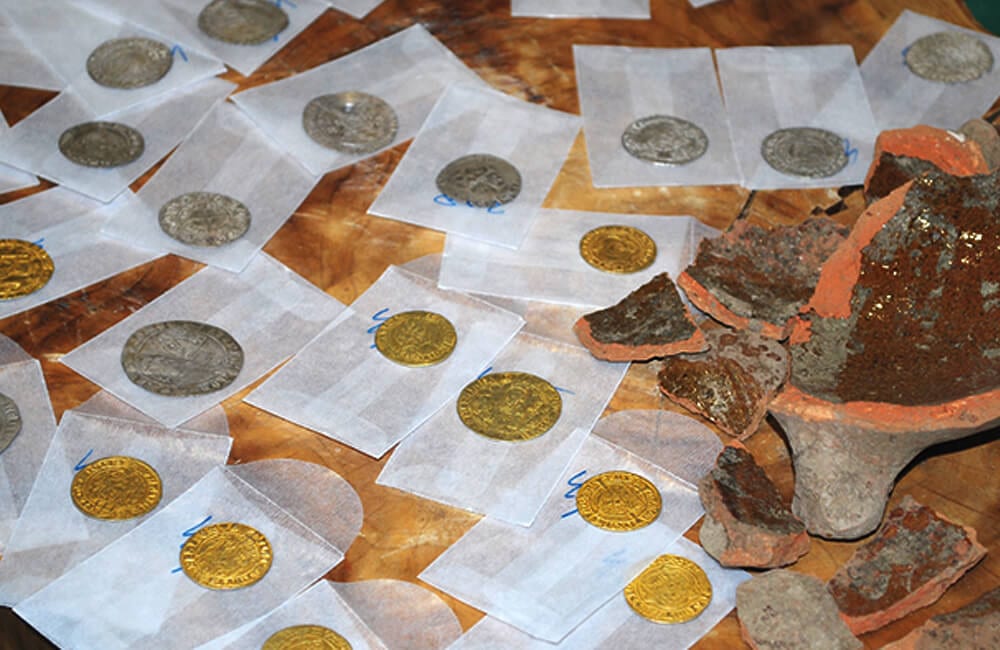 As it was a passenger ship and not a cargo ship, The Pulaski’s wreck wasn’t home to much treasure – or at least, so it was thought. When the wreck was eventually found in 2018, divers were shocked to find an ornately decorated gold watch lingering nearby, presumably from one of the ill-fated passengers. You can’t find something like this on eBay.

The Whydah Galley crew likely never thought they would be captured by pirates on their maiden voyage, although it was a very real threat in those times. Unfortunately, that’s exactly what happened. Captain Black Sam got his comeuppance when the Whydah sank in 1717 when it encountered bad weather. 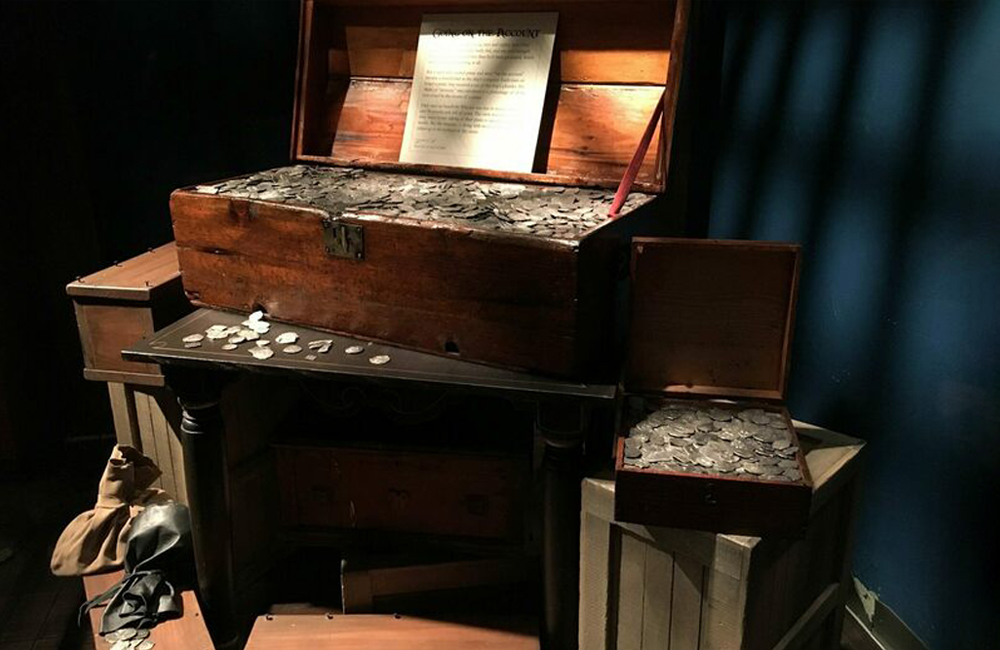 All the treasure in the hold sank with the ship to the bottom of the briny sea. It may sound like something from Disney’s Pirates of the Caribbean, but this is all 100% real. The ship was found in 1984 and is said to be worth a total of $120 million thanks to the assets she was carrying.