If there’s one status symbol that has endured and continued to capture public imagination, it’s undoubtedly the yacht. The luxurious seafaring vessels often cost upwards of tens of millions of dollars – with some superyachts even escalating into the hundreds of millions.

With price tags beyond what most of us will make in a lifetime, it takes someone with massive generational wealth, like Bill Gates of Microsoft fame, to be able to afford such open-sea opulence. On top of employing a small full-time crew simply to maintain the ships and wait on their guests, the fundamental cost of fuel alone is more than most will pay for their kid’s college.

Many yacht owners (and renters) also go the extra mile of supercharging their yachts with all kinds of bells and whistles. Let’s take a look at the most technologically impressive (and unbelievably expensive) yachts out there, owned by titans of industry from all over the globe.

Sharing the Oscar winner’s own Hawaiian name, the Hokulani is a stunning 150-foot yacht owned by Nicole Kidman. The starlet originally kept the vessel at her Sydney property, but decided to put it up for sale after relocating to the United States with her husband Keith Urban. 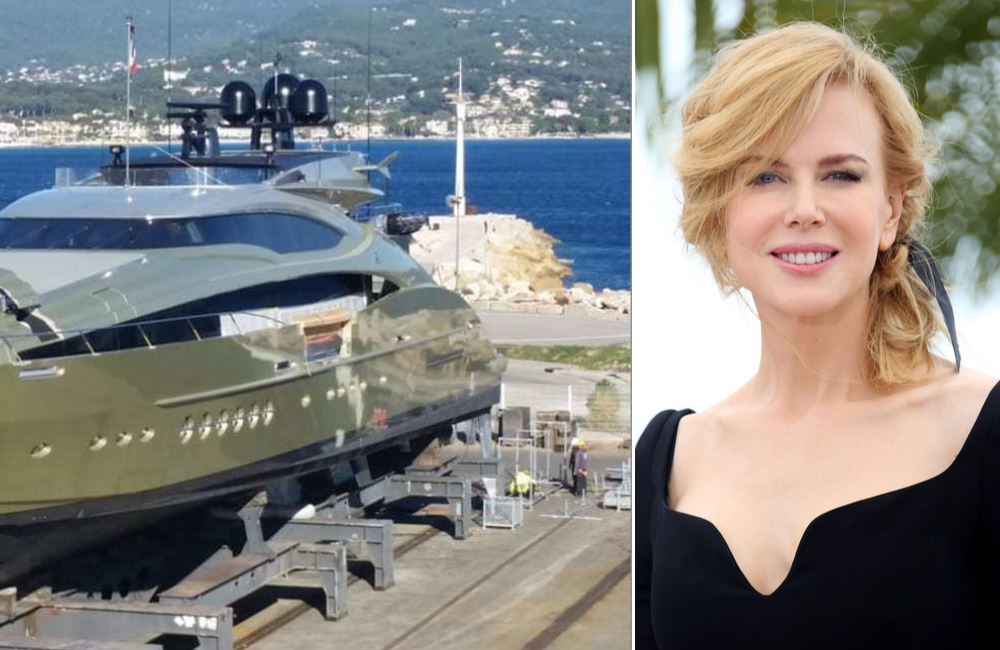 Hokulani is distinctive for its posh, sporty interior (including one of the more open sun decks out there), as well as features like a private movie theater and a special sunbathing deck. But its iconic champagne-colored exterior makes it one of the more recognizable vessels on the open seas.

Kidman relocated to Hollywood in the 1990s after achieving minor success in Australia’s film and TV industry. But following breakthrough roles in massive hits like Batman Forever, she quickly became one of Hollywood’s most sought-after stars.

Supermodel Gigi Hadid was joined by her sister, fellow supermodel Bella Hadid, on a Riva day boat. The models and their friends explored the coast of Capri. 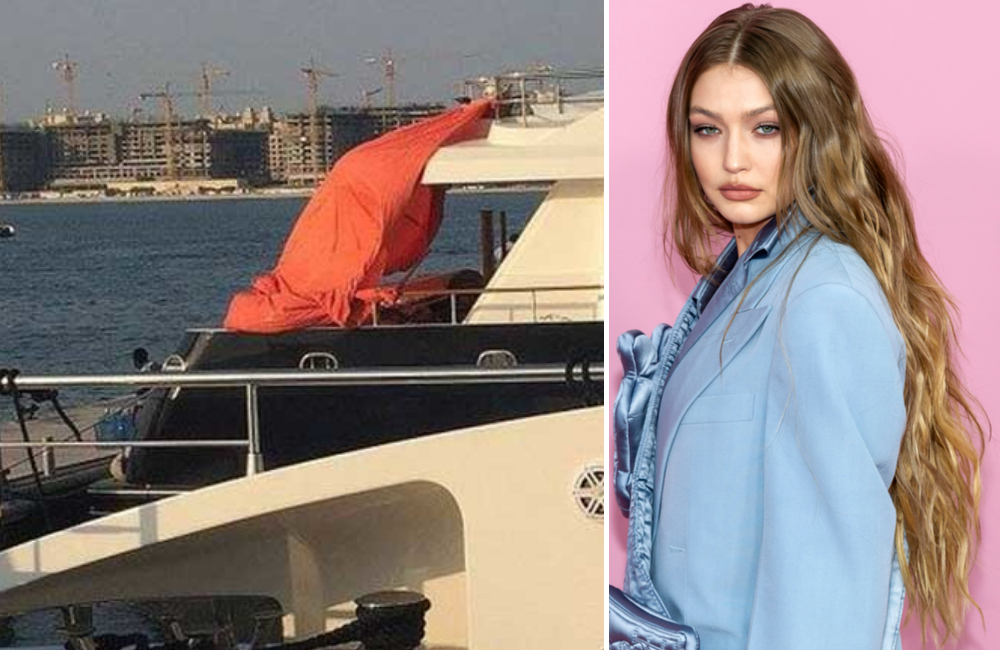 This wasn’t Hadid’s first Italian trip by far. She and Hailey Bieber were spotted on-site of a fashion shot. E! reported that, in June of 2020, they flew on a private jet to Italy in order to minimize travel exposure.

Hadid and Bieber wasted “no time,” according to an observer, going straight on-board the yacht to relax. Before Hadid went to Italy, she spent time at her family’s farm in Pennsylvania.

In an attempt to streamline his luxurious lifestyle (and costs), Oscar-winning actor Nicolas Cage decided to sell off one of his most prized possessions: his luxury superyacht, Sarita. With enough space to comfortably house a dozen passengers, Sarita’s standout feature was undoubtedly its ornate, wood-carved dining room. 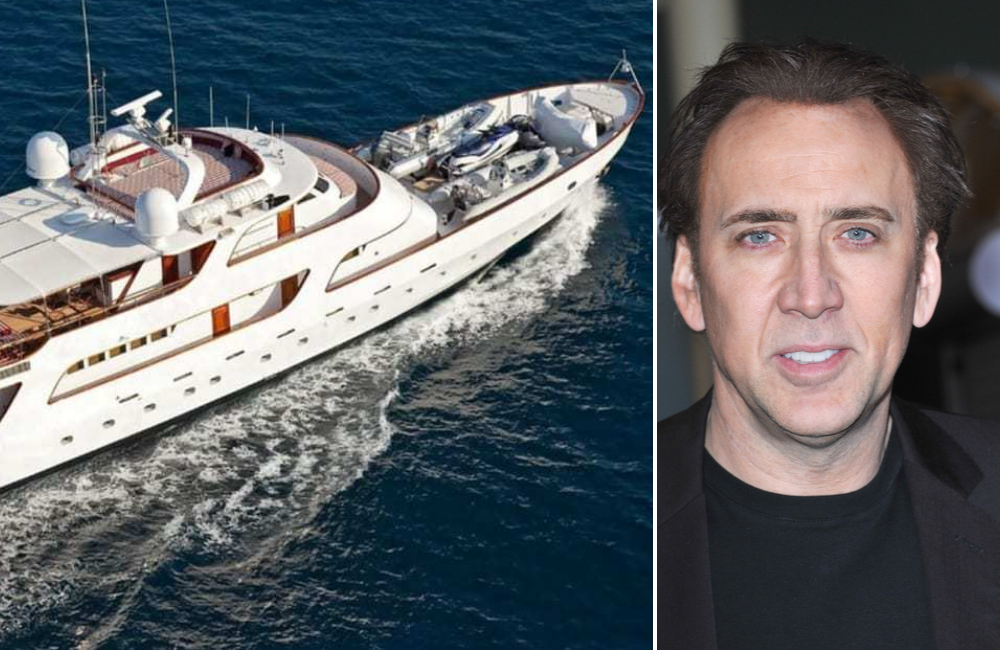 After reportedly paying somewhere around $20 million for this slice of maritime heaven, it’s believed that Cage sold it off for an undisclosed sum – though it recently wound up back on the market for closer to $29 million.

Transitioning between huge Hollywood hits like Con Air and more ambitious art-house fare like Adaptation, Cage’s uncanny all-or-nothing style of acting has seen incredible highs and equally amazing lows. But make no mistake: Cage is one of the hardest-working actors in the business, consistently acting in multiple films a year.

Cardi B is one of the hardest-working women in rap music, and she decided to take a break in Cabo San Lucas, Mexico, a popular celebrity vacation destination. She shared an Instagram photo of herself dancing to her song “Money” while on Ganesh A, a superyacht. 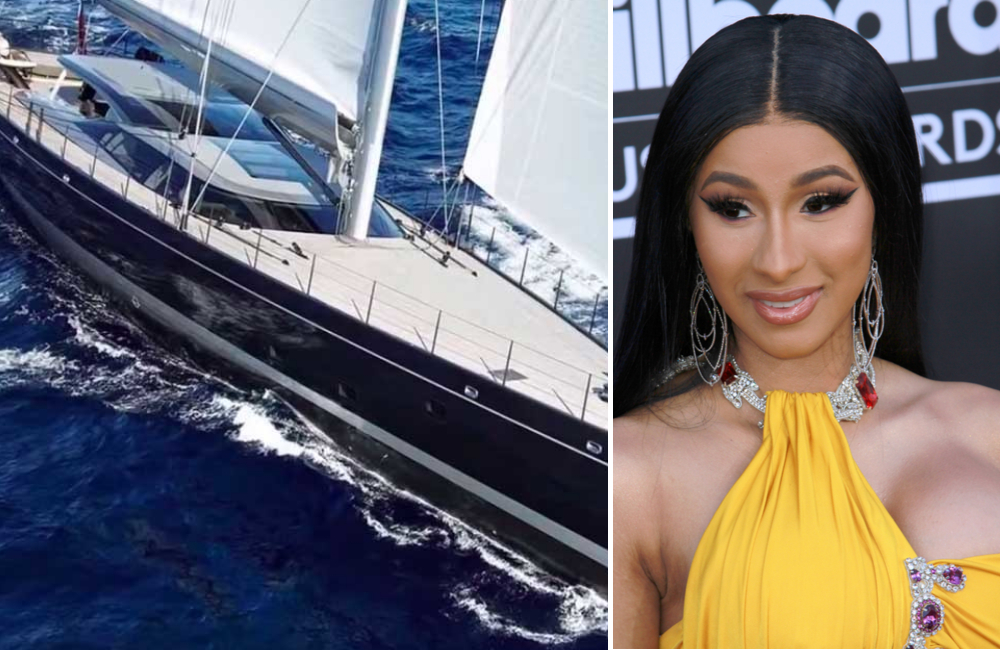 She rented the superyacht using Azimut Luxury Charters. Ganesh A, named after the Hindu deity, sleeps eight guests in four cabins. It costs $65,000 a week to rent.

Johnny Depp’s gorgeous superyacht Vajoliroja was once the actor’s most prized and personal possession. Between movie gigs, Depp would reportedly stow away on the vessel for weeks on end to escape to his personal island in the Bahamas. 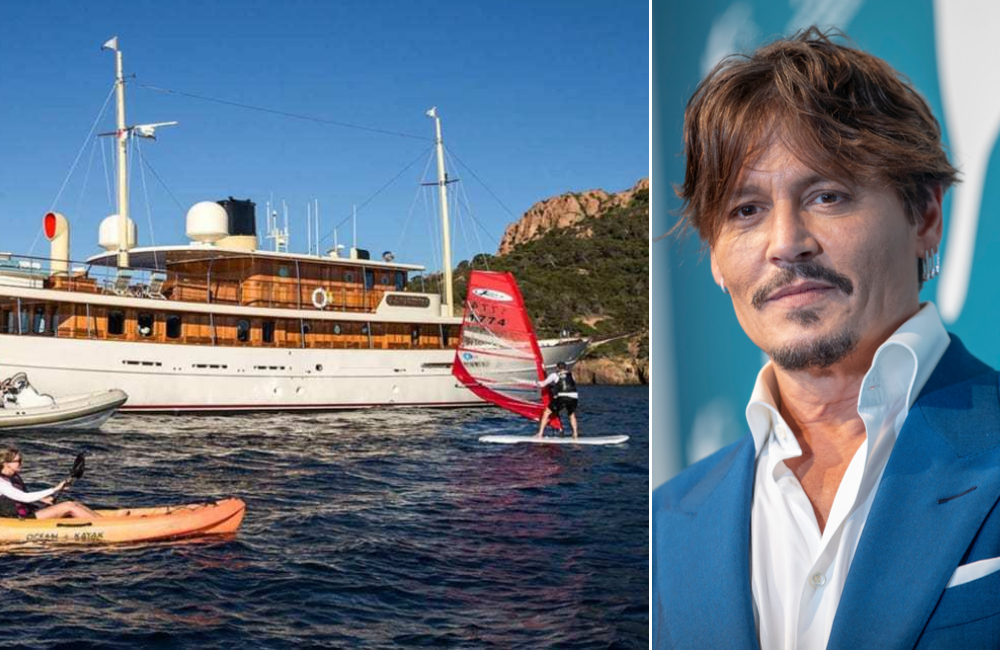 But in an effort to cut down on his personal expenses, Depp has now put his beloved ship up for charter. For the debatably worthwhile price of about $130,000 a week, wealthy travelers can actually rent Depp’s boat for their own sea getaways.

Featuring a classic 1930’s style with a strong Art Deco twist (and a big-screen TV in every room), it’s easy to see how Depp could spend so many hours aboard this beauty of a yacht.

Supermodel Chrissy Teigen and her husband John Legend recently partied atop Element with their kids during their family’s Italian vacation. The yacht was docked off the coast of Corsica, and its full name is Cantieri di Pisa Element. 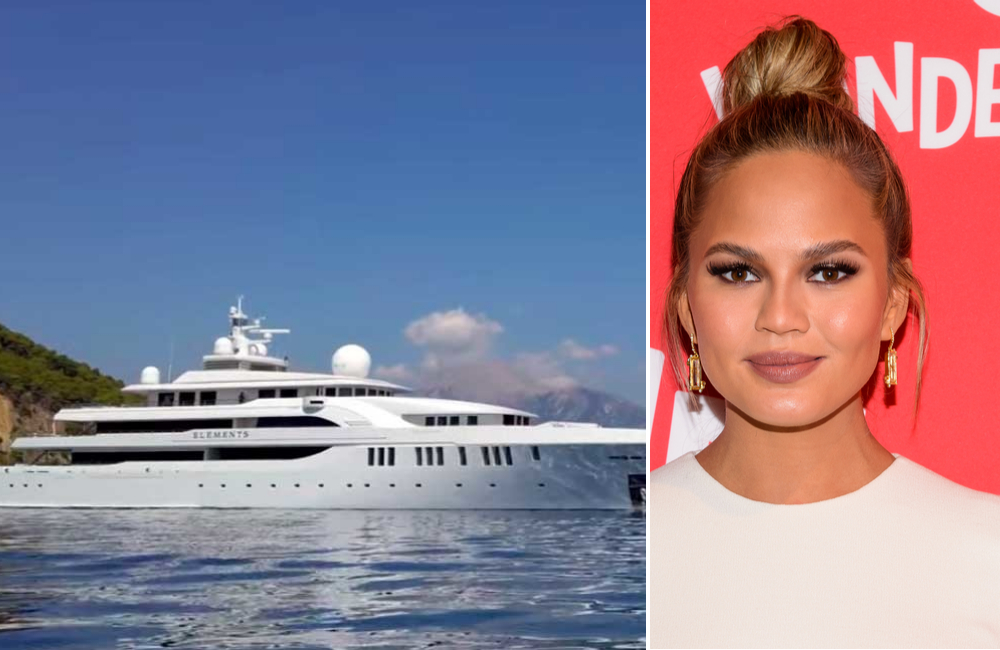 The luxury motor yacht was refitted back in 2017, and it accommodates twelve guests and ten crew members, making for a very fun family vacation.

Ellen DeGeneres joined fellow mega-famous celebrities Harry Styles and Kendall Jenner on a yacht in St. Bart’s. Ellen’s wife, actress Portia de Rossi, attended the yacht party as well, and they all had dinner together as a way to celebrate the New Year. 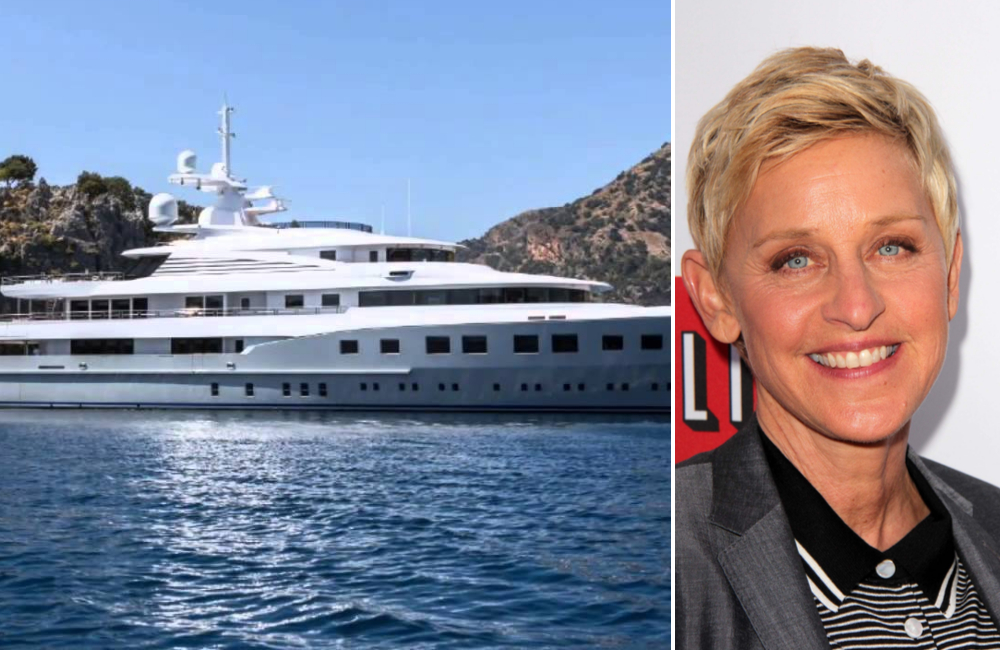 At the time, Jenner and Styles were dating (but they broke up in the spring of 2020). Their ten-day Caribbean vacation was “beautiful,” according to DeGeneres.

The comedian couldn’t help but crack a few jokes, stating on her show, Ellen, that the “great” yacht was like a “five-star hotel” that “could sink at any moment.”

The Galaxy is classed as a superyacht. The superyacht was built in 2005 by famous yacht-builder Benetti, and it has a top speed of sixteen knots (cruising—14 knots). 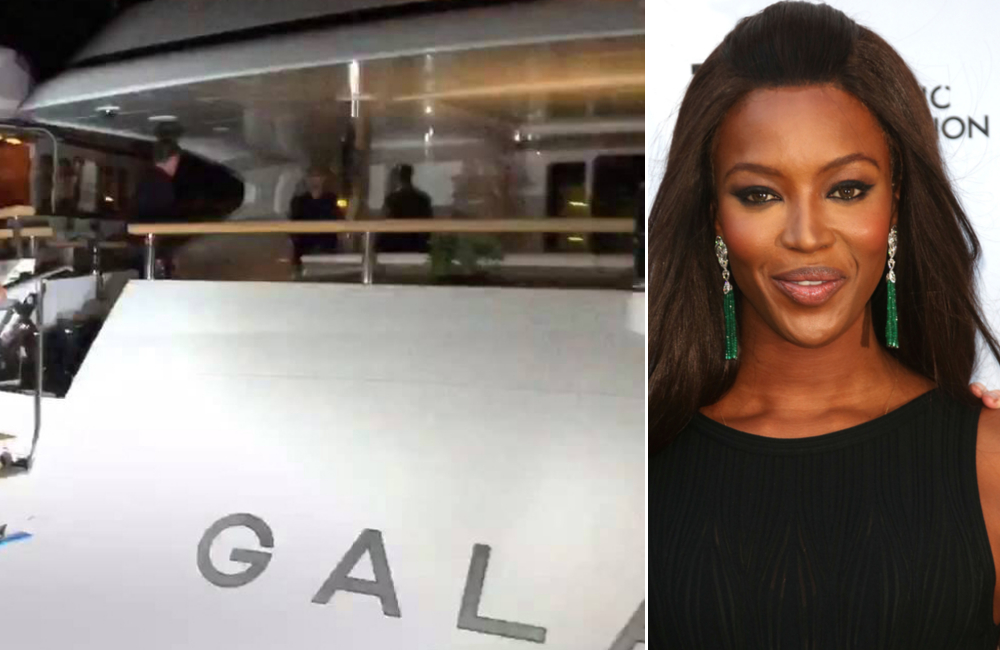 Galaxy’s prior owner was John Gandel, an Australian real estate developer. Now, the founder of Runningball AG owns it. Supermodel Naomi Campbell, who has represented brands like and Off White, was spotted on Galaxy a few years ago.

The superyacht is known for being lavish and sparing no expense. Galaxy has five sunning lounges just on her sundeck. The yacht’s luxurious interior was designed by Stefano Natucci for Benetti.

Bill Gates nearly broke the internet when he was rumored to have commissioned a new hydro-powered superyacht worth more than half a billion dollars. The custom ship would be completely powered by liquid hydrogen, meaning that its only emissions will be water–a total game-changer in the world of gas-guzzling super-yachts. 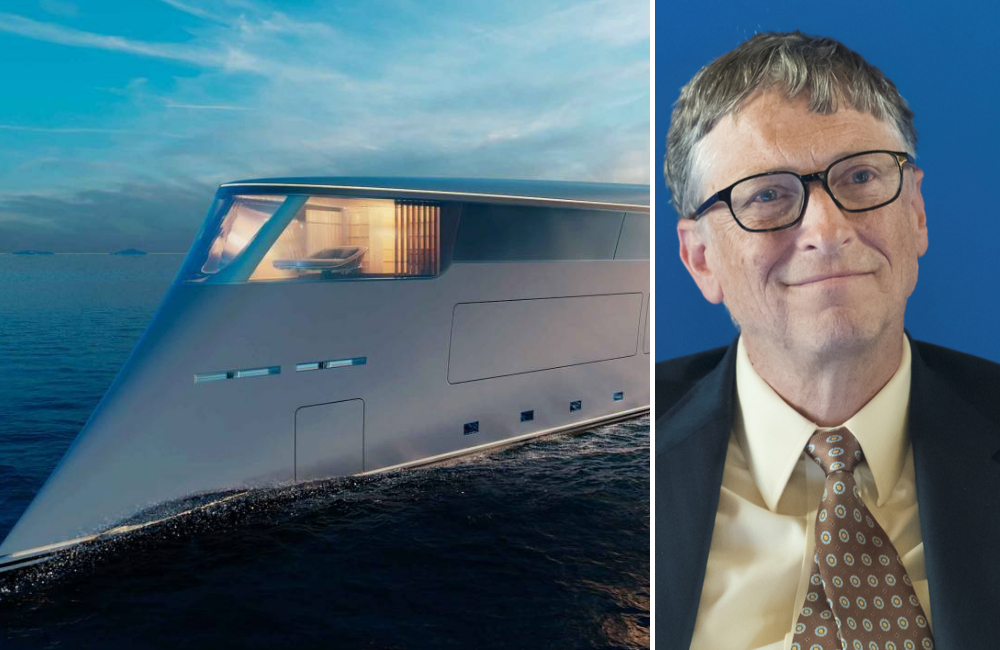 Hours later it came out, however, that the alleged purchase was a total hoax. Either way, the gorgeous vessel will be capable of accompanying 14 guests and 31 crew members, and will have everything on board from a yoga studio to an infinity pool.

With beautiful views from many points along the ship, it will be able to cross the Atlantic solely relying on hydro-power, making it the first of its kind and giving whoever owns it one hell of a bragging rite.

Michael Jordan is a billionaire, and he made his money both from becoming one of the world’s greatest basketball players and from becoming a savvy businessman with lucrative Nike deals that have made him millions. Jordan bought an $80 million yacht. The yacht is 230 feet long. It has a bar, full gym, dining room, eight cabins, Jacuzzi, and more. 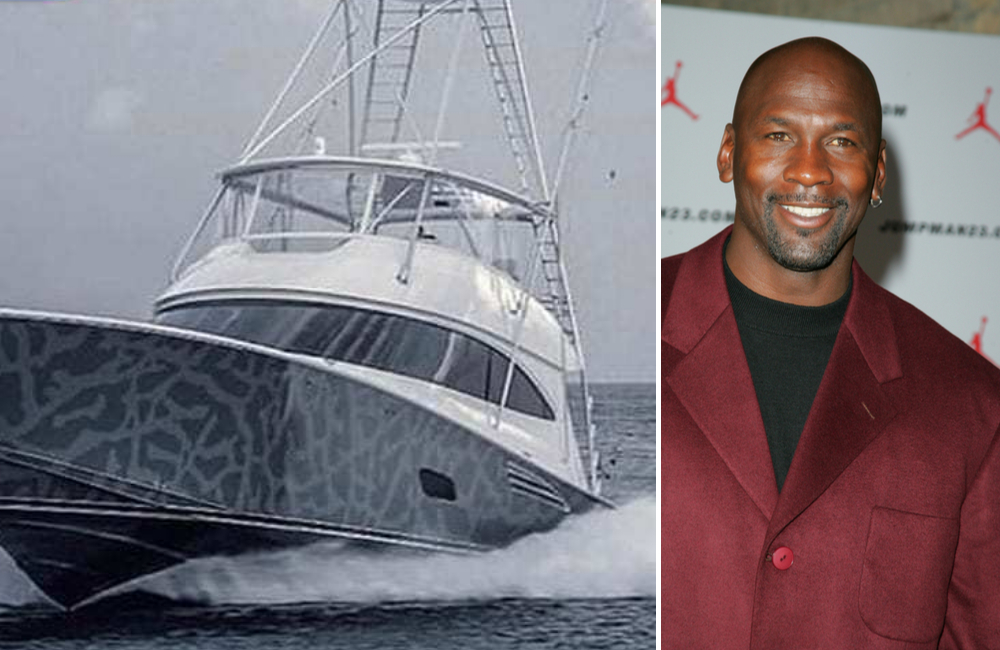 It has its own satellite and audiovisual system, as well as, of course, a full-size basketball court. The yacht costs $840,000 per week to operate. Jordan is often spotted on the yacht celebrating the New Year in luxurious style.

While Jordan’s time in the NBA with the Bulls is nothing short of legendary, his post-Bulls career has also proven to be incredibly lucrative. Jordan currently runs his own film/TV production outlet, and he’s also a part-owner of the Chicago Hornets.

Actor and martial artist Jackie Chan launched his yacht in July of 2019. The 46-meter superyacht launched from Chan’s native China. It was built in the Huludao Yacht Industry Park facility and launched by company Jinlong. 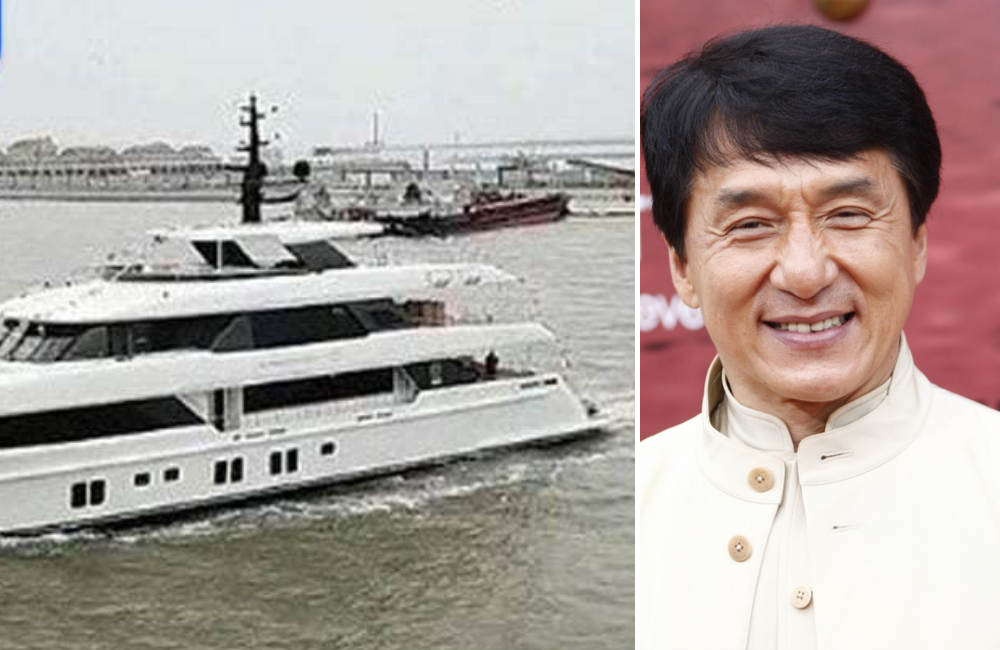 It was designed by Mulder Design. It has twin MTU engines. It gets up to twenty-one knots and an impressive 3,000NM range. The yacht is all-white with black windows.

The handover actually took place in a ceremony hosted by Huludao. Chan’s superyacht is his second. He also owns a superyacht that was built by Ruiying, a Chinese builder. Chan is the second-highest-paid actor in the world.

Actor Jerry Seinfeld is the owner of Moka, a charter yacht that has gotten a lot of commendations from RINA for being “Green Plus” and eco-friendly. Moka is, according to the website, built for “adventure.” 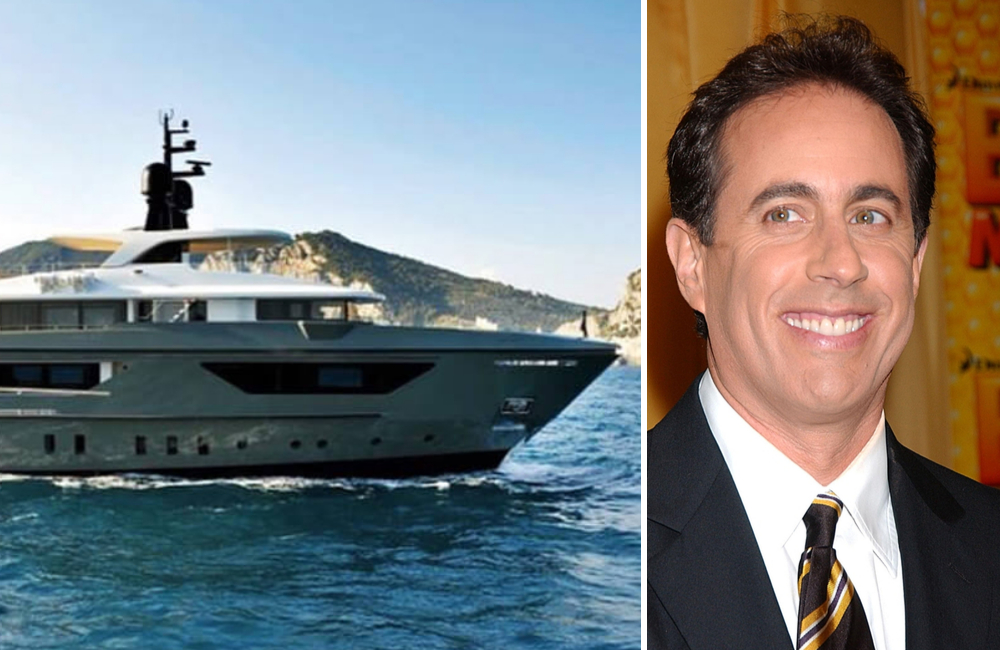 Moka is unique because she is able to remain anchored at bay without having to use generators for long periods of time. Moka has low emissions, low vibration, and low noise. He outfitted Moka with five cabins. She can house up to ten guests, not including crew.

It’s environmentally friendly status might not do much to offset Seinfeld’s enormous car collection though. The actor, who was on the -owned show Seinfeld, has a net worth of nearly $1 billion, and a car collection envied even by Jay Leno.

Jason Momoa and his friend, Chris Sharma, were spotted on a chartered yacht off the coast of Mallorca, soaking up the sun. The Game of Thrones star didn’t just spend time yachting; he also saw the sites around Mallorca, climbing the cliffs. 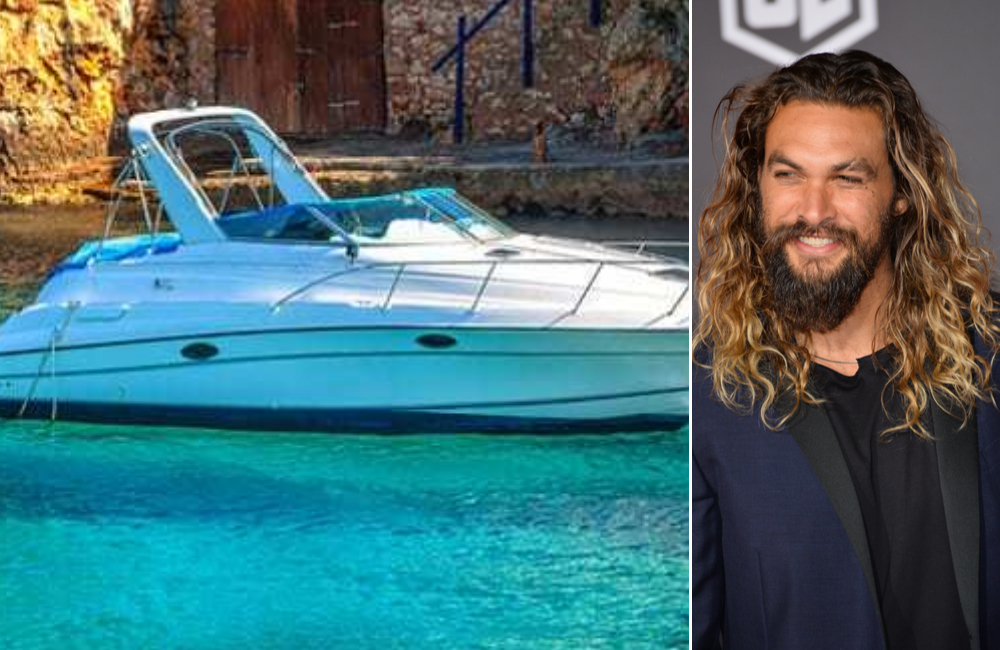 After all of that climbing and adventuring, Momoa and his friends were glad to kick back on a yacht. They also dined at the Jumeirah Hotel, one of the most luxurious spots in Mallorca.

Simon Cowell is worth around half a billion – thanks largely to his hit Fox show American Idol – so it makes sense that he would buy one beauty of a yacht. His custom-made yacht, Slipstream, was built by CMN Yachts. It has a deck Jacuzzi, gym, and can house twelve guests and fifteen crew. It also has a beautiful dining area with a deck overlooking the water, as well as a hotel-like master suite. 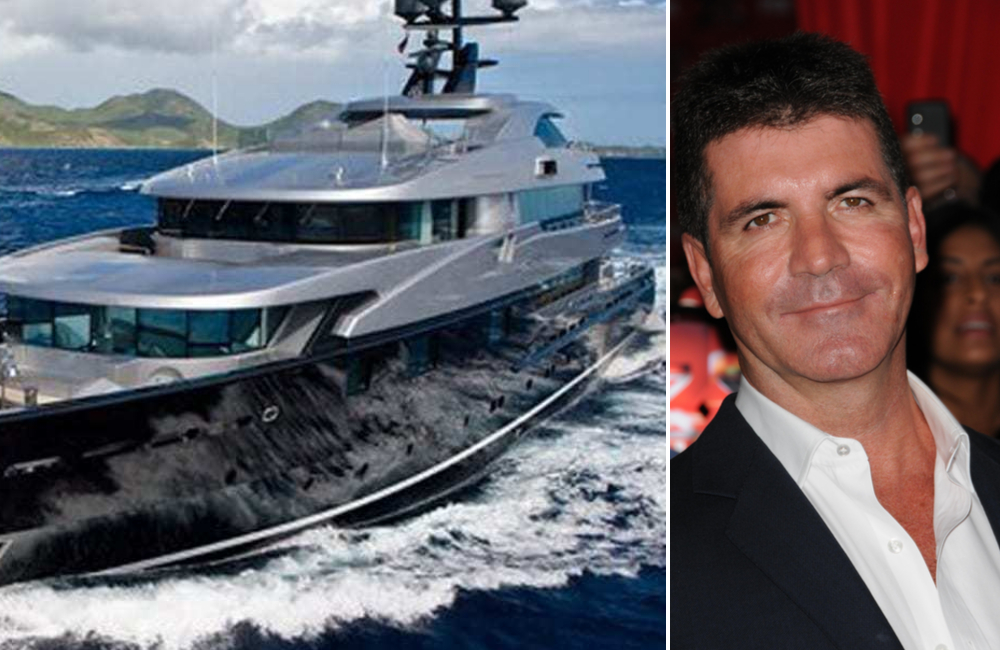 Cowell’s yacht even has an entrance foyer with a chandelier and sitting room. He was recently spotted on the sixty-meter yacht alongside his young son and his son’s mother. Cowell’s yacht costs $329 thousand per week.

In addition to his long string of memorable TV hosting roles, Cowell owes a large portion of his fortune to early-1990s TV. For example, Cowell successfully brought both Power Rangers and Teletubbies to American audiences.

Advertisement
Life Skills Every Adult Should Know to Save Time & Money
Life’s hard, especially the adulting portion of it. Let’s face it, life skills are easier said than done. For example, you know you should “be organized,” but what does that even mean? Should you invest in a file folder? A Rolodex, like it’s the nineties? Looking on Google for the answers to your daily trials […]
Cheap Wedding Trends You See Everywhere
Weddings are gorgeous days filled with love, light…and probably a trend or two that won’t be around within the next five years. Whether you realize it or not, weddings these days are heavily influenced by social media, royals, and keeping up with the Joneses.  There are some wedding trends that we just can’t get away […]
Future Tech Products That Are About to Change Our World
One thing that is certain about modern technology is that before anyone realizes what’s happened, it has become old and dated, thus allowing what were once pipedreams of future products to transition into being modern technology. From a real-life Jurassic Park experience to a toilet that has the ability to analyze one’s waste in order […]
Biggest Money Scams of All Time
Scamming naive people who are hoping to make a quick profit is a practice that opportunists have been undertaking for thousands of years. As the times have changed, however, the scams and those perpetrating them, have evolved.  From modern-day multi-layered marketing companies to multi-million dollar carpet cleaning companies that don’t even exist, here is a […]
Advertisement