Fashion trends come and go, but hats are forever. Special occasions like premier sporting events or royal weddings are an excuse to push the boundaries of fashion and opt for a truly outrageous hat. In fact, some creations are so out-there that they look like miniature UFOs that are simply visiting planet Earth for a short spell.

Designers really go all out when it comes to creating headpieces that make an impact. From a full English breakfast to a getup Dunkin’ Donuts would be proud of, these inspiring hats are jaw-dropping – but they aren’t cheap.

When finding a hat to wear to the Kentucky Derby, it’s important to make sure that it coordinates with your outfit. No one wants to be stood in the crowd looking like an oil spill, but what if you just can’t settle on one color theme? 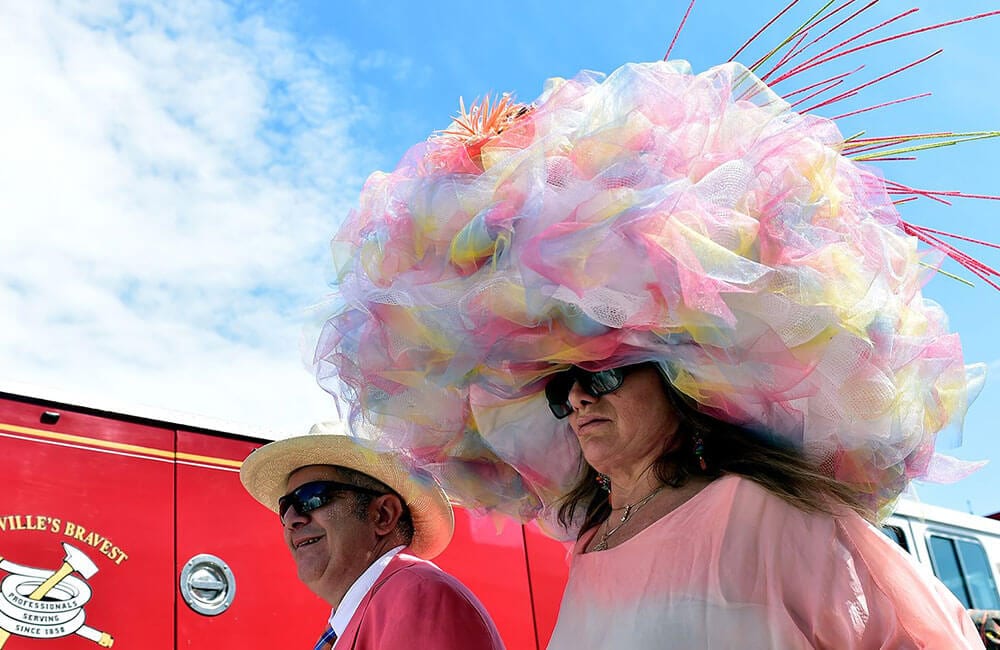 Instead of narrowing your options, why not do as this guest did and go for all of the colors under the sun? It might look like she’s been turned upside down and used as a cotton candy stick, but that hat is layers and layers of tulle. You can’t walk into Target and pick something like this off the shelf.

Designers are more than willing to try and come up with something unique that will get noticed, but most of them might opt for something that’s on-trend and fashionable. It’s not often you see someone wearing a giant cigarette plastered to the side of their head, but we can give extra points for ingenuity. 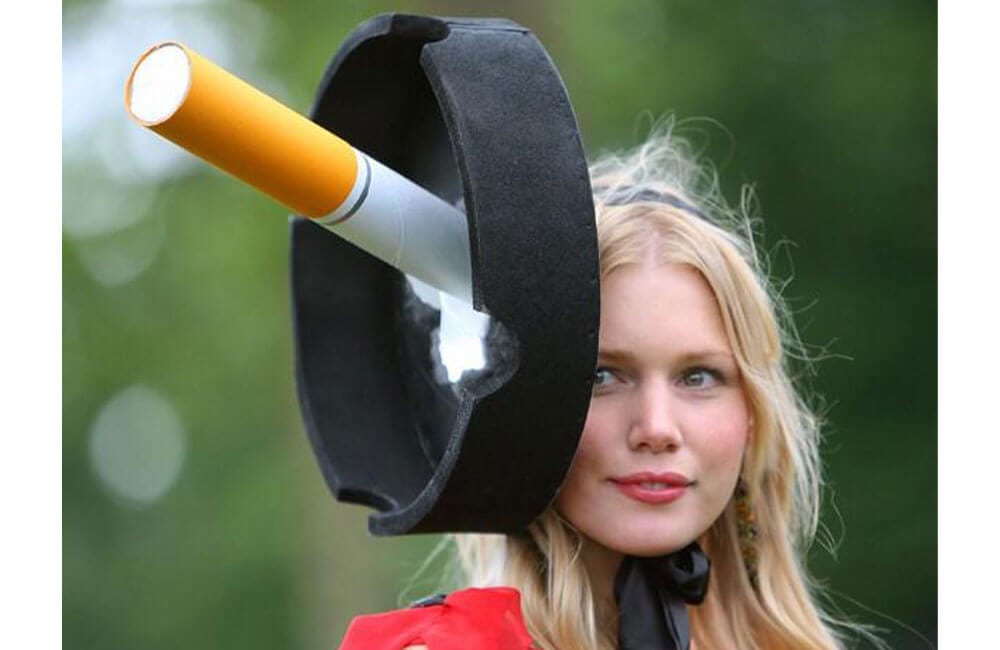 Spare a thought for the friends of this hat wearer, though, who likely couldn’t walk on her left without getting a giant butt in the eye. On the plus side, it probably made for some interesting Instagram pictures!

Feathers have been used in hat-making for years. There’s nothing quite like a spray of exotic plumes to elevate a hat, but what happens when it goes a little too far? We can definitely applaud the color coordination in this interesting design, but does that make it right? 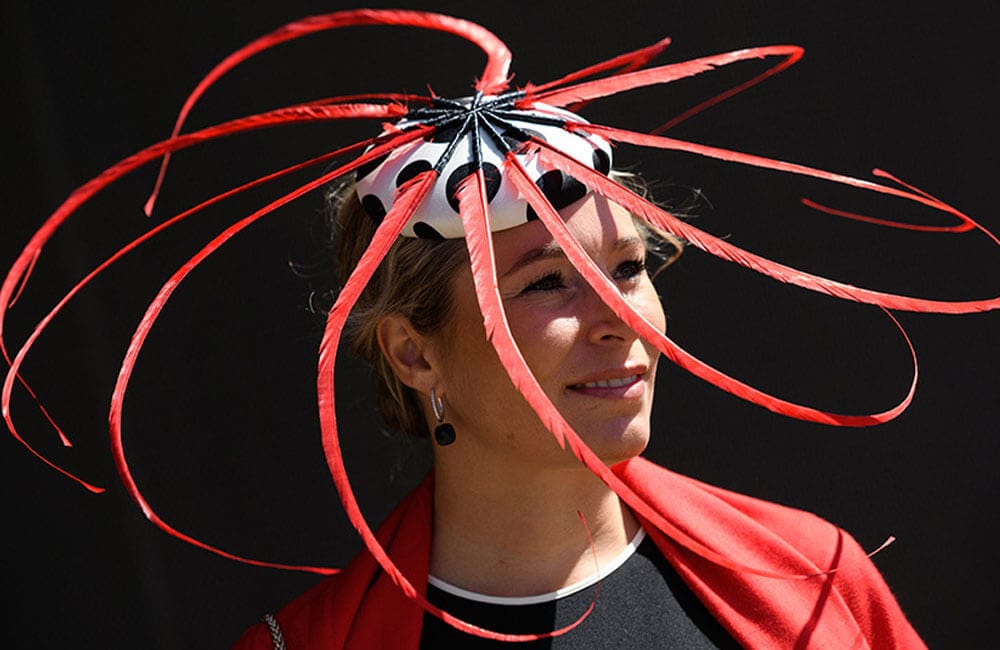 Would you pay upward of $300 for something that feels a tad too bare? To each their own. There aren’t many rules when it comes to hats at sporting events. It’s all about pushing boundaries and making the most out of the opportunity to wear something totally bizarre.

There are some hat lovers out there that go for a sophisticated little fascinator that looks delicate and chic. Then, there are some that go for the “more is more” approach. No middle ground, just a whacking great bunch of material adorned with badges, bottle tops, and Mardi Gras beads. 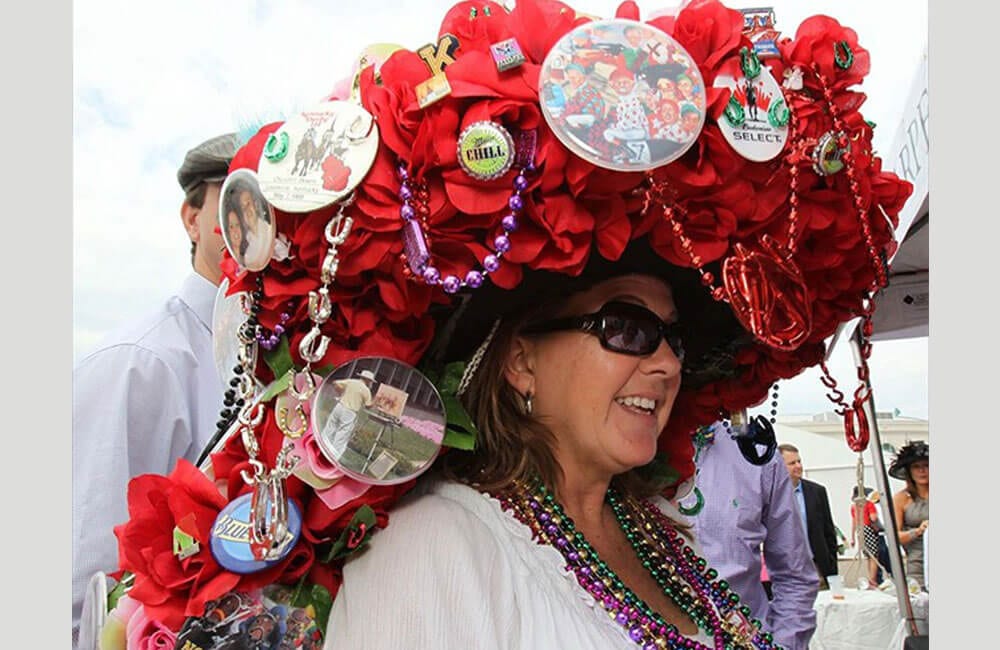 Can you guess which category this Kentucky Derby attendee falls into? Aside from the visual feast this hat offers, it’s hard to look at it without wondering just how uncomfortable it must be to wear. That’s got to weigh more than a wallet belonging to Amazon’s Jeff Bezos. Almost.

Butterflies have been making appearances on hats for as long as Mick Jagger has been shaking his hips on stage. However, it’s usually just a small appearance and not an entire host of the winged creatures that are designed to look like they’re coming home to nest. 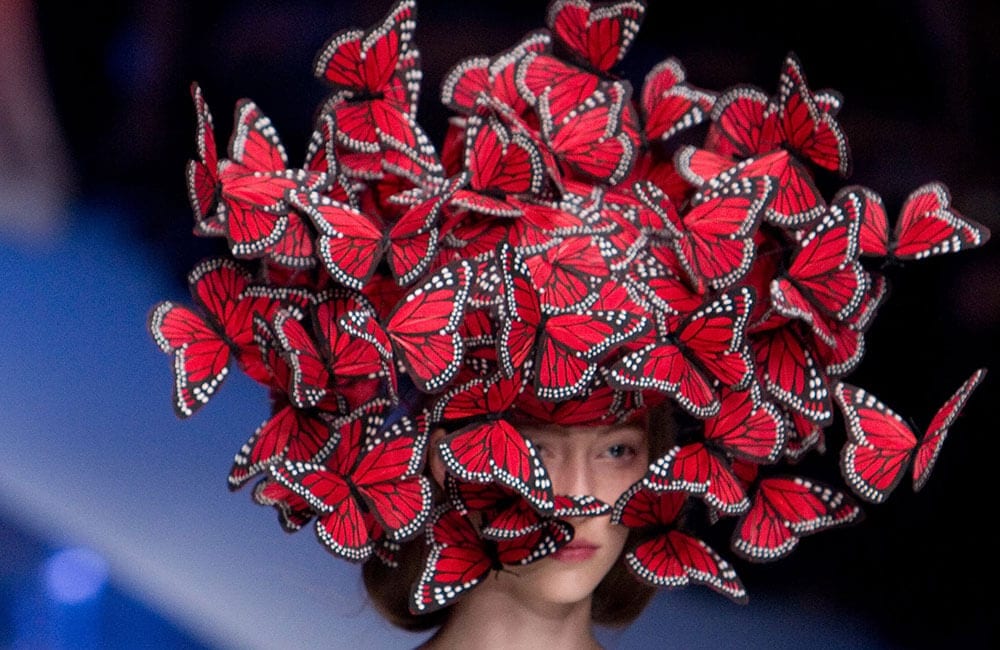 In 2008, legendary fashion designer Alexander McQueen asked equally legendary milliner Philip Treacy to create some butterfly headwear for his fashion show. Treacy obliged and these hats were born. If you’re lucky enough to catch them at a specialized auction (not on eBay unfortunately) you could pick one up for around $3,000.

It’s usual to see flowers riding high on hats at sporting events, but what about ones that have a cocktail and a bunch of fruit on them, too? This felt and foam masterpiece certainly took some skill to make. Even though the materials would have been relatively cheap, the actual construction would have been costly. 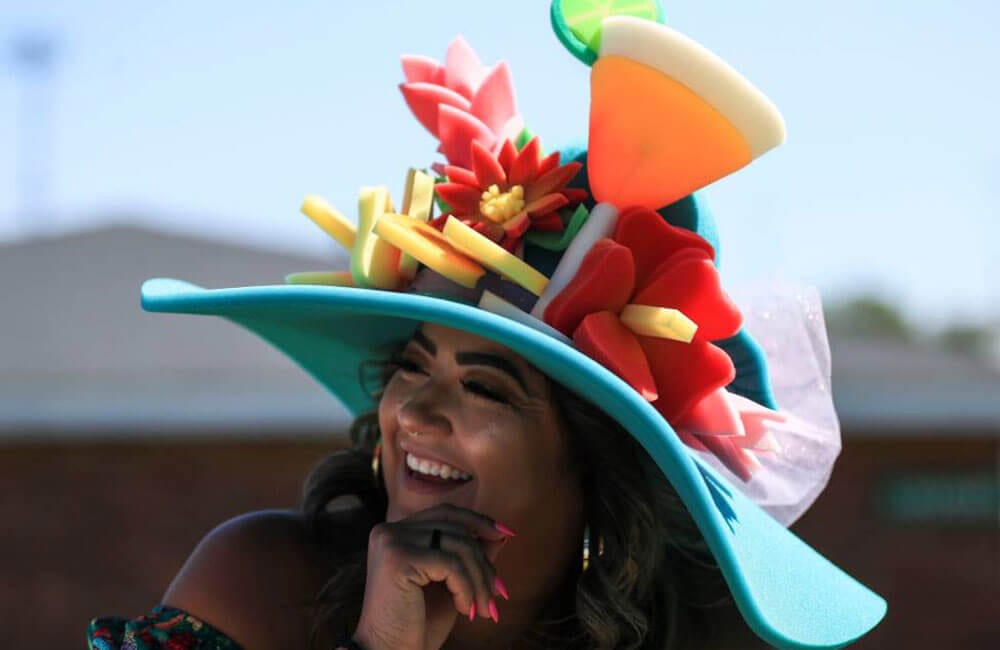 It’s unusual, entertaining, and definitely ticks all the boxes when it comes to outrageousness. It doesn’t mean that it will be hitting the Walmart shelves anytime soon, but there’s no doubt that it’s the pride and joy of this woman’s closest.

When Princess Beatrice and Princess Eugenie turned up to Kate and Will’s wedding in 2011, they pulled out all the stops. While Eugenie’s blue headpiece was interesting, it was Beatrice’s Philip Treacy bow number that stole the show. The world was torn about it, with some thinking it was awful and others loving it. 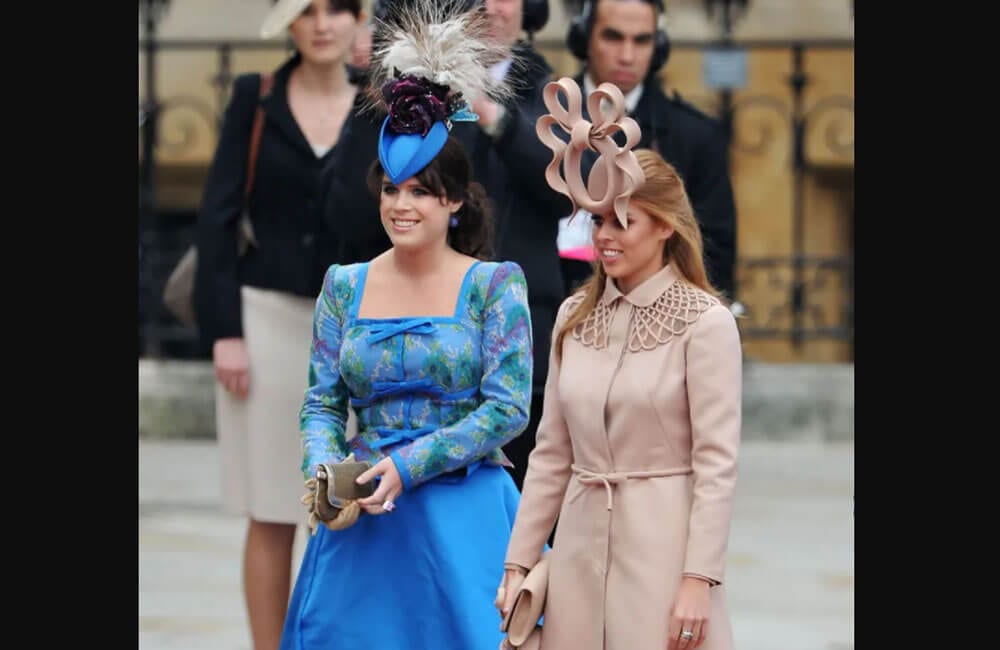 Ultimately, Beatrice ended up putting the hat one sale on eBay after the event. It made a huge $130,000, all of which went to the Princess’ charitable causes. Love it or hate it, you can’t deny it made a positive splash in the end.

There’s something about this hat that just screams Greek mythology. While we’ll never know what the inspiration behind it was, it’s definitely giving off Minotaur vibes. The gold ensemble seems to be made out of some type of confectionery, all assembled into one spiral design. 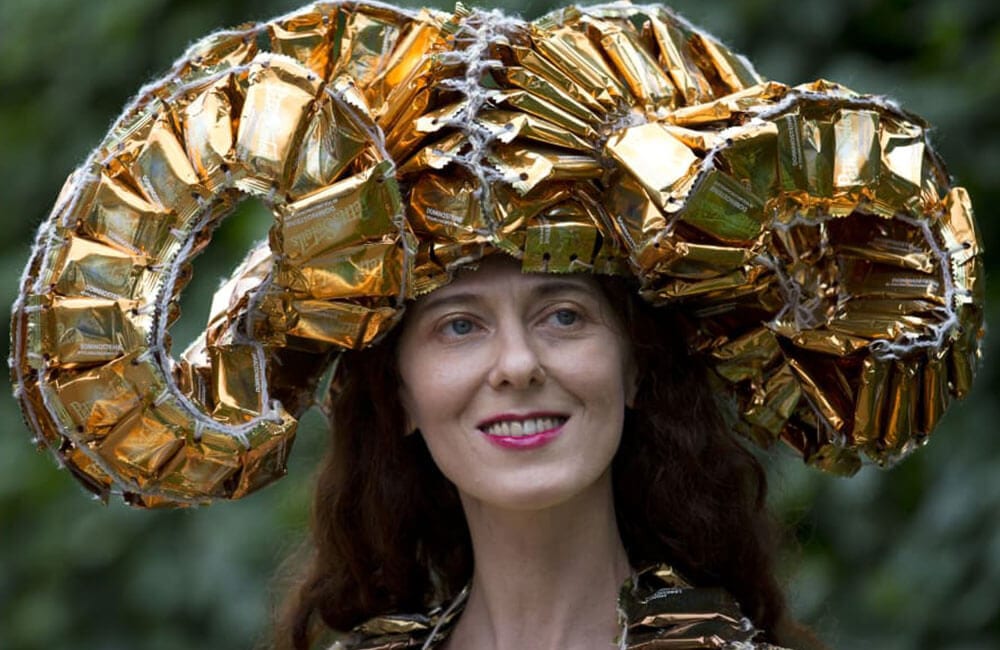 It would have taken a lot of glue to create, but what’s a little bit of carefully placed Krazy Glue when you’re trying to create a thing of beauty? Some use needles, some use velcro. Others use nothing but a bit of foil and a prayer.

As Dolly Parton says, “The bigger the hair, the closer to God.” In this case, it’s “The higher the beer, the closer to Bud.” This ingenious design pays homage to one of the most popular beers in America, but it also manages to look remarkably like a witch’s hat at the same time. 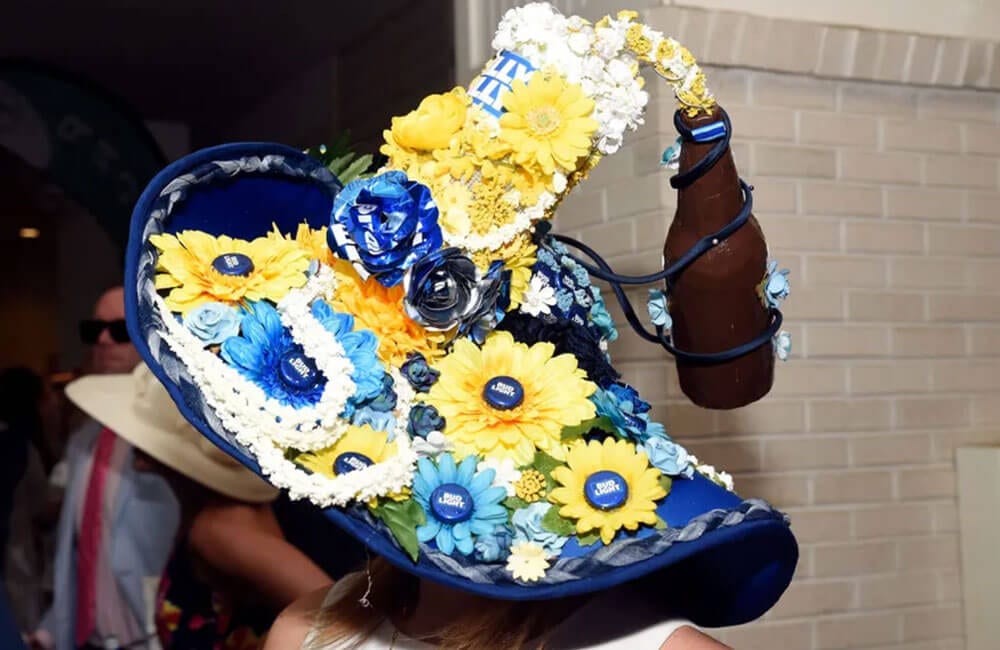 The only magic going on here is the Bud floating miraculously alongside the floral creation. Is it really strong wire, or is it sheer determination to make one hell of a fashion statement? We may never know.

Valentino is a big name in the fashion game, which is why creations by the design house often go for incredibly large amounts of money. Valentino has been making large feather hats for a while now, although it’s not a trend that has bled into everyday life. 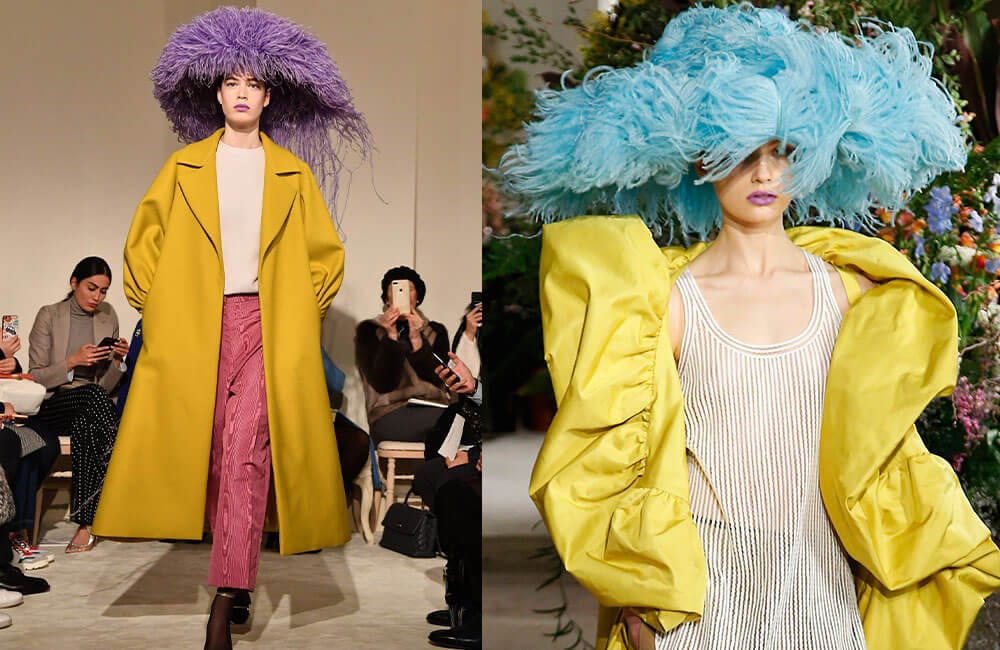 That doesn’t mean that big-name stars like Warner’s Dua Lipa don’t wear them as part of their stage outfits, though. Valentino debuted the large feather hats on the runway, but they often pop up elsewhere and turn plenty of heads. When something this big comes into the room, you notice.

It could be said that fashion is art, but when you literally paint a landscape on a hat, this is even more true. This stunning headpiece turned up at The Grand National. Presumably, this was in the days before social distancing, but it would come in handy post-2020, too. 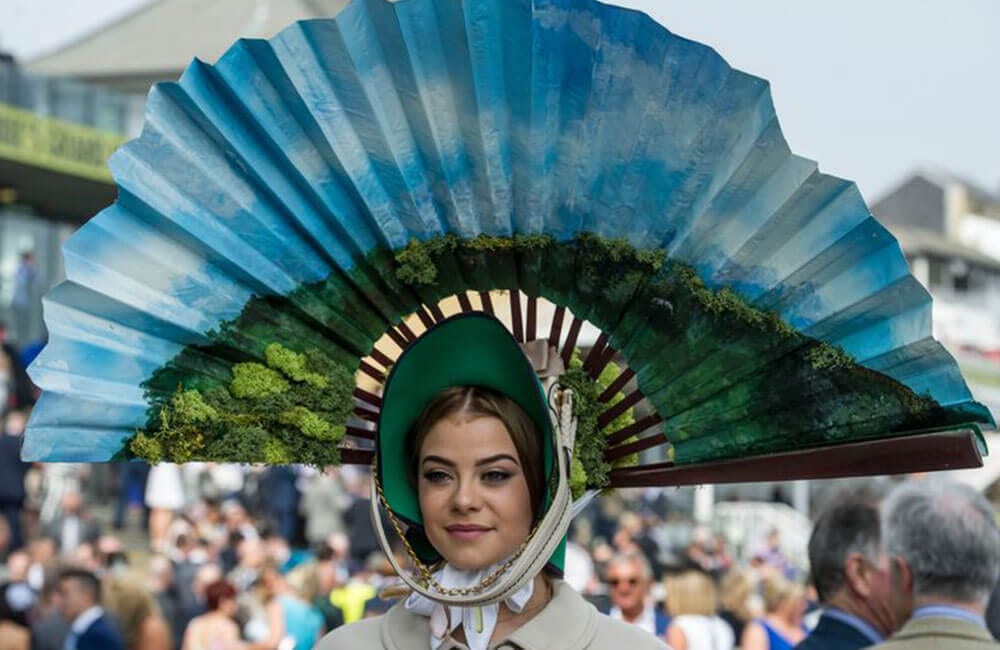 No one will come near you when you’ve got something this big keeping them at bay. The entire design must have taken quite a lot of planning to pull off, but it was all worthwhile in the end. If worthwhile translates to having your picture circulated around the internet for all eternity, that is.

Anyone that’s ever been to the Kentucky Derby will tell you that there are some sights to be seen. It’s just as much about fashion as it is about horses. Some hats are simple, while others leave you wondering if you’ve accidentally stumbled into a middle school home ec class. 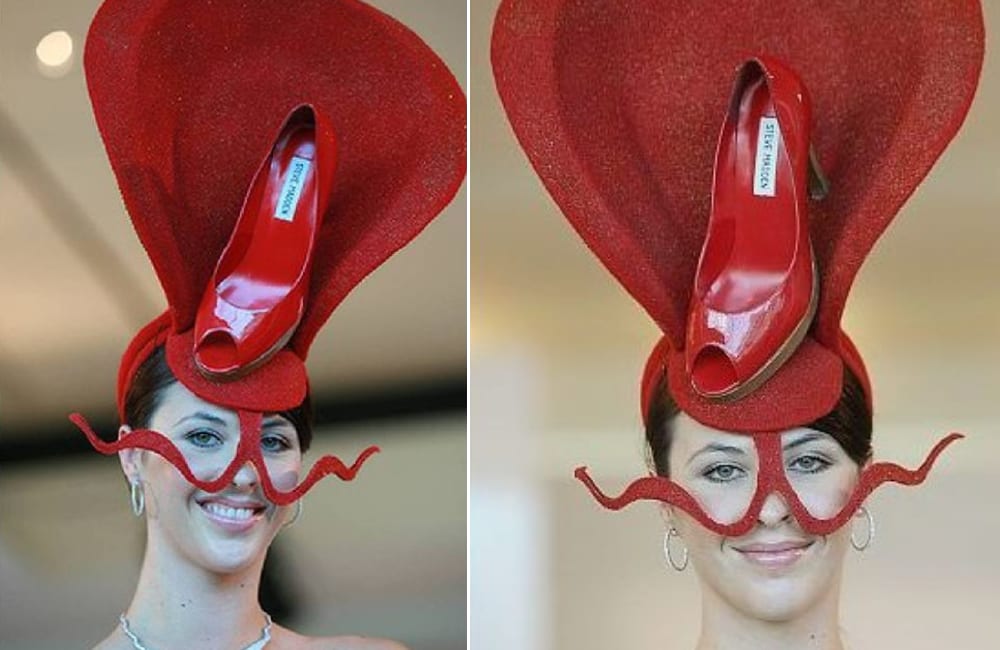 We love a bold statement, but is this red shoe dress taking it a little too far? It’s part Sebastian from Disney’s The Little Mermaid and part Louboutin knock-off. The interesting mustache situation is really what tops it all off.

Over the years, Billy Porter has gained quite the reputation for being a true style icon. His red carpet looks never fail to disappoint, and he’s always been a fan of a good hat. Back in 2020, he pushed the boat out even more by having a custom fringe hat made.

Not only was the fringe crystal, but the curtain was motorized. When he wanted a dramatic entrance it could cover his whole face, but at the flick of the button, it would part like the red sea. Porter worked on the hat alongside Scott Studenberg.

Is it a bird, is it a plane? Is it a deconstructed swan wearing a pearl necklace? Or is it just the only thing that the hat maker could come up with at such short notice? It’s difficult to establish the exact backstory of this interesting headpiece, but the wearer looks like the cat that got the cream.

Is it a Bird, Is it a Plane @viva/ Pinterest.com

One thing’s for sure, she wouldn’t have walked in and run the risk of bumping into someone wearing the same thing. If all else fails and the hat no longer serves its purpose, it could be turned into a scratching post, or a particularly interesting coat rack.

Advertisement
Lowest-Earning Movie Roles for Famous Hollywood Actors
When it comes to the biggest names in Hollywood, we always imagine their work coming with contracts of millions of dollars. How else could they afford the lavish lifestyles we all envy and follow in the tabloids? For many actors, it hasn’t always been that way. Some take a pay cut because of inexperience, the […]
These 25 American Jobs Will Be Replaced By Robots In The Future
For decades, people have been concerned about the possibility that machines might one day turn on those who have created them and begin the A.I. revolution that the Terminator franchise so drearily predicted. Thankfully, to date, “Judgement Day” has not taken place, however, people continue to tread the thin line that separates humans from machines.  […]
Best Cars Coming In 2022
The world slowed down in 2020, and car production was delayed, causing the vehicle market to become stagnant. Life is getting back to normal now, and 2022 has some very exciting offerings, as far as new cars go. Judging from this list, new vehicles in 2022 are expected to pack quite a punch. Features like […]
The Most Extravagant Celebrity Proposals of All Time
In any culture, wedding proposals are one of the most significant moments in a person’s life. Whether it involves a huge charade culminating in a significant other getting down on one knee, or is a more spontaneous ask in the heat of the moment, it’s an event that most never forget.  While most people are […]
Advertisement