By Valerie Volcovici and Nichola Groom

(Reuters) - President Joe Biden campaigned on a promise to restore U.S. leadership in the global fight against climate change and followed up with a dizzying number of executive orders and lofty targets to slash emissions.

But nine months into his presidency, political, legal, and economic obstacles have forced his administration to make several moves in support of fossil fuels development at home and abroad, and raised questions about whether the Democrat will be able to meet his commitments to clean energy.

Setbacks include a judge overturning the administration's effort to block new oil and gas leasing on federal lands, forcing it to offer millions of new acres for drilling, and rising retail gas prices that have led the White House to publicly ask the global oil cartel, OPEC, to boost production.

Most importantly, heavy political opposition has forced the administration to put its centerpiece climate proposals that would help deliver an April pledge to halve greenhouse gas emissions by 2030 into a budget reconciliation bill that has an uncertain future in the closely-divided U.S. Congress.

Democrats, who hope to pass the bill by the end of September, are already talking about paring back investments and targets.

The stakes couldn't be higher. If Washington fails to deliver ahead of a climate summit in November in Glasgow, Scotland, other global powers, including the world's top greenhouse gas emitter, China, will be reluctant to commit to slashing their own emissions.

"If that (climate-related legislation) went down before Glasgow, it would be a big mess for Biden and his administration," said Bill Hare, chief executive of non-profit Climate Analytics.

"We can do two things at once: Achieve our climate goals while ensuring the energy transition is one that takes into account the interests of the middle class, who experience changes in energy prices very directly, and meet global energy needs as the economy recovers from the pandemic," the official said, asking not to be named in order to be able to speak freely.

Biden's mission is uniquely challenging in the United States, where some voters and even some senior leaders in the opposition Republican party are skeptical that climate change is caused by human activity.

Congress “is where the main theater of activity is taking place. And that is where I would pin the fate of the Biden administration’s climate legacy,” said Sam Ricketts, a co-founder of Evergreen Action, a group aiming to advance climate policy at the federal level.

His administration also aimed to decarbonize the power sector by 2035 - a key marker on the U.S. path to its Paris agreement goal of net zero emissions by 2050.

In addition, the United States and Europe have agreed to big voluntary cuts to methane emissions this decade, Reuters reported earlier this week.

In August, the White House also urged the Organisation of the Petroleum Exporting Countries to lift production to help the global economy recover from the impacts of the coronavirus crisis and keep retail pump prices in check for U.S. motorists.

After a federal judge in Louisiana in June blocked Biden's signature attempt to pause new leasing, the Interior Department plans to open millions of acres for oil and gas exploration, including some 80 million acres in the Gulf of Mexico to be auctioned later this year.

“What started as a set of ambitious campaign promises is quickly devolving into a disappointing milieu of fossil fuel development," said Taylor McKinnon, a senior campaigner for the Center for Biological Diversity, an environmental group opposed to oil and gas development.

ALL EYES ON CONGRESS

Climate Analytics' Hare said much now depends on the legislation making its way through Congress, which includes provisions to reduce carbon emissions from the power and transport sectors, tax credits for clean energy technologies, fees on methane releases from oil and gas, more investments in electric vehicle deployment, and a fund to funnel climate investments to low-income communities.

Many of the proposals were initially in a smaller infrastructure package but have since been either weakened or wedged into the $3.5 trillion budget bill that only requires a simple majority in the 100-member Senate rather than 60 votes as usual under the chamber's rules.

Even that will require the backing of every single Democratic senator, a big ask given that both Joe Manchin, a moderate from coal-producing West Virginia, and Kyrsten Sinema of Arizona have said they will not vote for a bill of that size.

Neither Manchin nor Sinema's offices responded to requests for comment.

Ahead of the Glasgow summit, international observers are not optimistic about the prospects.

"It is not too hard for China to be cynical about U.S. climate action,” said Li Shuo, a senior climate policy officer at environmental group Greenpeace East Asia, who is in regular contact with government officials in China. 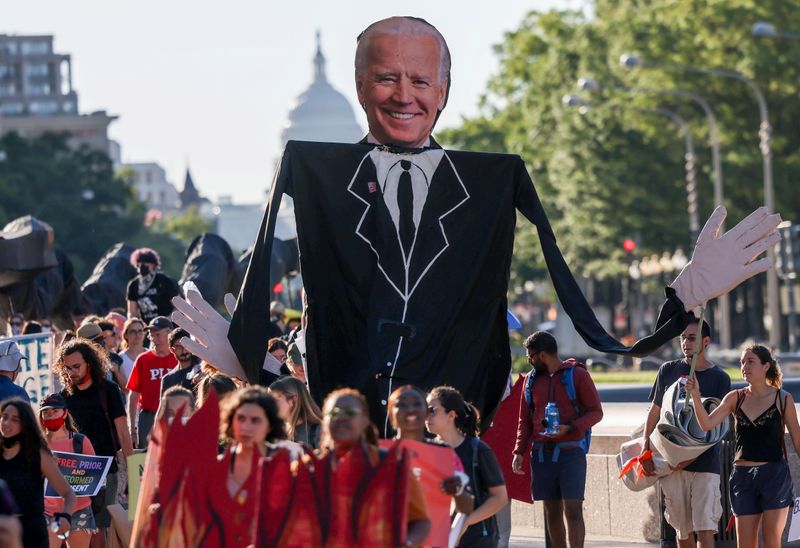 "The international climate community has had to become expert over the years on U.S. domestic politics and legislative processes, and the challenges of delivering are well understood by allies and competitors of the U.S. alike," he said.