SAN SALVADOR/NEW YORK (Reuters) - El Salvador's big bet on bitcoin, which the Central American nation has been buying since September, has soured in recent weeks as a cryptocurrency rout shaved over a third of the value of the government's holdings, Reuters calculations show.

Under populist President Nayib Bukele, a vocal cheerleader for the currency, El Salvador went all-in on bitcoin, not just becoming the world's first country to adopt it as a legal tender but also sketching out plans for a volcano-powered crypto mining hub and plans to issue the first sovereign bond linked to the coin.

With global borrowing costs on the rise and a big debt repayment on the horizon, El Salvador has other fiscal headaches than the impact of the currency's swoon. But the crypto slump has also closed some potential off-ramps from the crisis, including the now-postponed bitcoin bond.

"The government's financial problems are not because of bitcoin, but they have gotten worse because of bitcoin," said Ricardo Castaneda, senior economist and country coordinator for El Salvador and Honduras at think tank Central American Institute for Fiscal Studies (ICEFI). For the government, he said, "bitcoin ceased to be a solution and has become part of the problem."

Bitcoin has fallen 45% since El Salvador officially adopted it in early September, and 26% from its May high as crypto assets have been swept up in a risk-off investing environment.

The combined market value of all cryptocurrencies recently fell to $1.2 trillion, less than half of where it was last November, based on data from CoinMarketCap.

El Salvador's debt stood at $24.4 billion as of December, from $19.8 billion at end-2019, after the Bukele administration allocated millions of dollars to deal with the COVID-19 pandemic and its economic effects over the past couple of years.

The International Monetary Fund estimates that the current account deficit for its remittance and external financing-reliant economy will hover near $2 billion through 2025.

But adopting bitcoin set the country at loggerheads with multilateral lenders like the IMF, from which Finance Minister Alejandro Zelaya said https://www.reuters.com/article/us-el-salvador-economy-exclusive/exclusive-el-salvador-seeks-imf-funding-sees-golden-opportunity-for-economy-says-finance-minister-idUSKBN2AW1GV last year the government was seeking $1.3 billion.

The fund has recommended that El Salvador ditch bitcoin altogether. Any deal for a credit line would have to address risks including "those related to the adoption of bitcoin as legal tender as well as risks related to economic governance," an IMF official said on Wednesday.

Ratings agencies have warned bitcoin adoption could facilitate money laundering, and importantly, the bitcoin risk has given bond investors another reason to demand higher returns

As of Wednesday, they were seeking a record-high premium of 2,445 basis points over U.S. Treasuries.

Bukele's moves to centralize power, from removing all the top judges on the country's supreme court to muscling through authorization to seek immediate re-election despite constitutional term limits, have helped drive the risk premium higher.

"If there isn't potential for bitcoin-growth dividends or innovative bitcoin-financing, then the Bukele administration will have to prioritize spending priorities and identify financing options," according to Siobhan Morden, head of Latin America Fixed Income Strategy at Amherst Pierpont.

Reuters calculations of a $36 million paper loss in bitcoin, enough to make at least some of those coupon payments, is based on Bukele's tweets and an estimate of prices on the purchase dates. The government has spent some $104.2 million on 2,301 coins now worth just $67.9 million using Wednesday's volume weighted average price.

The country has to service $329 million in interest due on its international bonds this year as well as $800 million in a bond set to mature in January.

ICEFI's Castaneda listed financing options including the Central American and Latin American development banks - CABEI and CAF, respectively - as possible patches for financing the $800 million payment due in January. Another option, he said, is to nationalize the country's pension fund to cover the fiscal deficit - which could be done by transferring the public's savings to a government account.

A debt restructuring for El Salvador is "inevitable" if the country continues with the "current policy mix," said Polina Kurdyavko, head of emerging markets at BlueBay Asset Management. "Debt in El Salvador could be sustainable with the right (IMF) program. But they have to act now."

The country's finance minister, Zelaya, declined to comment for this story. 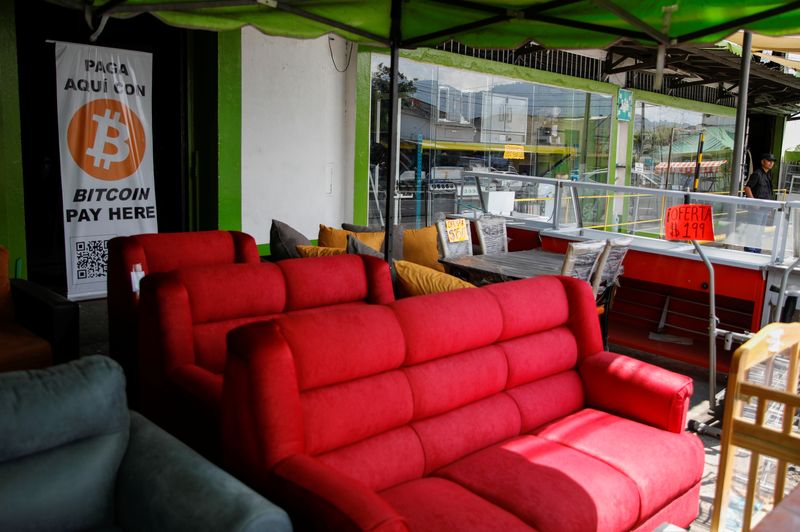 Salvadoran bonds trade between 43.5 cents and 34 cents on the dollar except for the January maturity at 75 cents, reflecting cautious optimism that the country could make that payment.

The cost to insure investors against a Salvadoran sovereign default over the next five years on Wednesday hit its highest level since 2020, according to S&P Global (NYSE: SPGI ) data.