U.S. retail sales rose 0.9% last month while data for March was revised higher to show sales advancing 1.4% instead of 0.7% as previously reported, the Commerce Department said.

The data show U.S. consumers weathering inflationary headwinds as sales gained for the fourth consecutive month, said Jeffrey Roach, chief economist for LPL Financial. Sales are nominal, so much of the increase is from higher prices, he said.

"We expect a rebound in economic growth in Q2," Roach said in an email, if prices moderate enough to relieve some of the pressure on consumers.

"The stock market is getting close to overcorrecting and pricing in the probability of a recession that I think is just too high," Saglimbene said.

Data also showed industrial production rose 1.1% in April, with the manufacturing capacity utilization rate at its highest since 2007. The sector is running too hot and needs to slow for inflation to get under control, said Bill Adams, chief economist for Comerica (NYSE: CMA ) Bank.

The Federal Reserve will raise the federal funds rate half a percentage point at each of its next two policy meetings to throw some sand in the economy's gears, Adams said in an email.

The U.S. central bank will "keep pushing" to tighten U.S. monetary policy until it is clear inflation is declining, Fed chair Jerome Powell said at a Wall Street Journal event.

"What we need to see is inflation coming down in a clear and convincing way," he said. "If we don't see that, we will have to consider moving more aggressively" to tighten financial conditions.

The Fed is behind the curve and trying to play catch up, said Brian Ward, chief executive of Broadmark Realty Capital Inc.

"We are trying to address a very complex set of facts with a very blunt instrument via monetary policy and I think that it's not going to turn out well," Ward said.

The dollar eased for a third straight day, pulling back from a two-decade high against a basket of major peers, as an uptick in risk appetite cut the greenback's safe-haven appeal.

Fears remain about the strength of the world's two largest economies after weak retail and factory figures in China and some disappointing U.S. manufacturing data..

An index compiled by U.S. bank Citi that monitors whether economic data comes in better or worse than economists had been expecting is back in negative territory.

Crude oil gave up gains on news Washington may ease restrictions on Venezuela's government, and prices fell further when Powell began to speak on concerns a Fed policy error could slam the economy and reduce energy demand. 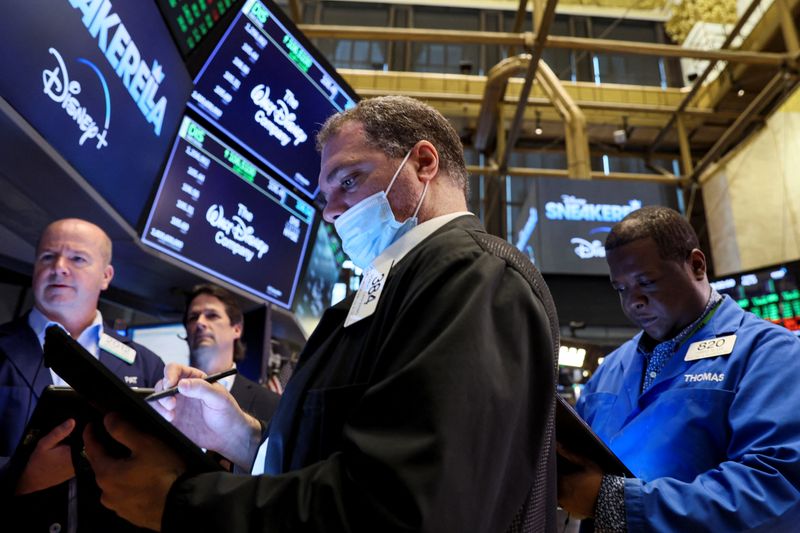 Hopes that China might ease lockdowns after Shanghai achieved the long-awaited milestone of three straight days with no new COVID-19 cases outside quarantine zones.