(Reuters) -Wall Street stocks were mostly flat on Monday, the dollar weakened and U.S. government bond yields fell as investors weighed mixed messages on inflation and how aggressive the Federal Reserve might be in combating it.

Of note was Nvidia Corp, whose stock declined around 6% after the chip designer warned on Monday that its second-quarter revenue would drop by 19% from the prior quarter on weakness in its gaming business.

The broad Euro STOXX 600 finished up around 0.75% on Monday, led by cyclical and growth stocks, helping it recover losses from Friday. But the MSCI world equity index, which tracks shares in 47 countries, added just 0.15%.

"With labor market strength, the threat of a recession seems remote, but concerns over how aggressive the Federal Reserve could be hovers over the market," Quincy Krosby, chief global strategist for LPL Financial, said in an email.

Business investment appeared to be an early victim of rising prices and rates, according to new U.S. government data.

At the same time, U.S. consumers' expectations for where inflation will be in a year and three years dropped sharply in July, a New York Federal Reserve survey showed on Monday, a win for policy makers.

'OTHER SIDE OF THAT MOUNTAIN'

"The rise in inflation and the Fed's reaction to it has been a real headwind for valuations this year," Morgan Stanley (NYSE: MS ) strategists wrote in a note on Monday. "However, it's also been a tailwind for earnings. Now, we are on the other side of that mountain, and operating leverage is rolling over likely more than the consensus expects."

Fed funds futures traders are now pricing for a 67.5% chance of another 75 basis point rate increase in September, and for the Fed funds rate to rise to 3.65% by March, from 2.33% now.

"We see inflation staying above the Fed’s 2% target through next year," BlackRock (NYSE: BLK ) Investment Institute strategists wrote in a note on Monday. "We think the Fed will keep responding to calls to tame inflation until it acknowledges how that would stall growth."

In foreign exchange markets, the U.S. dollar dipped around 0.2% versus a basket of six major currencies to 106.4, giving up some gains after strengthening on the jobs boom and the jump in yields.

"Data like this will further any thoughts about 'U.S. exceptionalism' and is very positive for the USD against all currencies," said Alan Ruskin, global head of G10 FX strategy at Deutsche Bank (ETR: DBKGn ), referring to the U.S. jobs statistics.

Bitcoin and other cryptocurrencies, which tend to act as a barometer for risk appetite, gained. Bitcoin was last up 3.25% at $23,942. 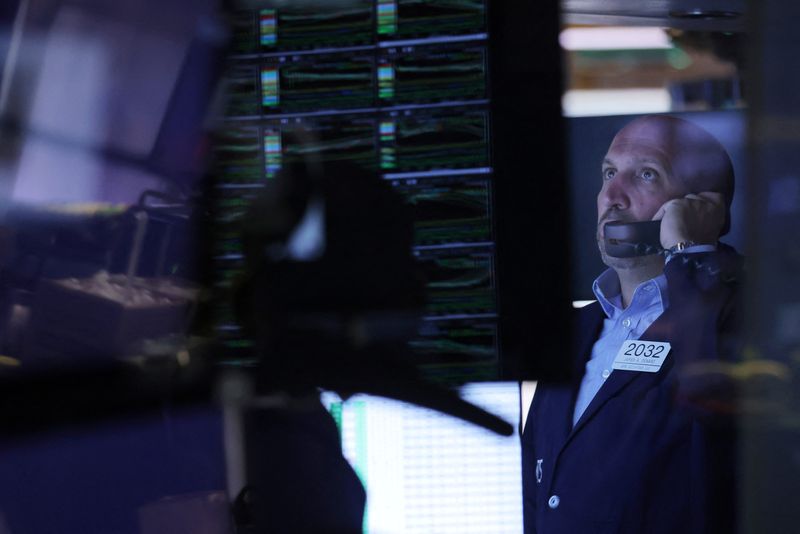 Oil prices rebounded some on Monday but were still near their lowest levels in months in volatile trading as positive economic data from China and the United States spurred hopes for demand growth despite recession fears.