LONDON (Reuters) - Shares slipped and the dollar hung off recent highs on Tuesday as investors eyed U.S. inflation data due a day later that will likely yield clues to any further aggressive Federal Reserve rate hikes.

The broader Euro STOXX 600 fell 0.6%, after logging its best session in nearly two weeks on Monday, with German stocks down 0.7%. Miners and autos, among top gainers a day earlier, led declines on Tuesday.

"The focus is on tomorrow's U.S. inflation numbers and whether or not they are likely to show any indication of a softening of inflationary pressures," said Michael Hewson, chief market analyst at CMC Markets.

"Are we near the peak, and will tomorrow's CPI numbers reflect that?"

Investors are now awaiting the consumer price data to gauge whether the Fed might ease slightly in its inflation fight and provide a better footing for the economy to grow.

The dollar also held just below its recent top, with traders wary of a surprise that could heap more upward pressure on interest rates. Against a basket of currencies, the dollar was down a fraction at 106.14.

Caution abounded in bond markets, too, with euro zone bond yields steady. Germany's 10-year yield, the benchmark for the bloc, was unchanged at 0.90%.

There were some encouraging signs for the Fed on the prices front, with a New York Fed survey on Monday showing consumers' inflation expectations fell sharply in July.

"That'll be music to the Fed’s ears, since if that trend continues then it means that the Fed may not have to be so aggressive in hiking rates," Deutsche Bank (ETR: DBKGn ) analysts wrote.

"One of their big fears is that higher inflation expectations will lead to a self-fulfilling prophecy of higher actual inflation."

Soaring prices across the globe are likely to be top of the agenda at the Jackson Hole central banking symposium later this month.

The Bank of England (BoE) will probably have to raise interest rates further from their current 14-year high to tackle inflation pressures that are gaining a foothold in Britain's economy, BoE Deputy Governor Dave Ramsden said. 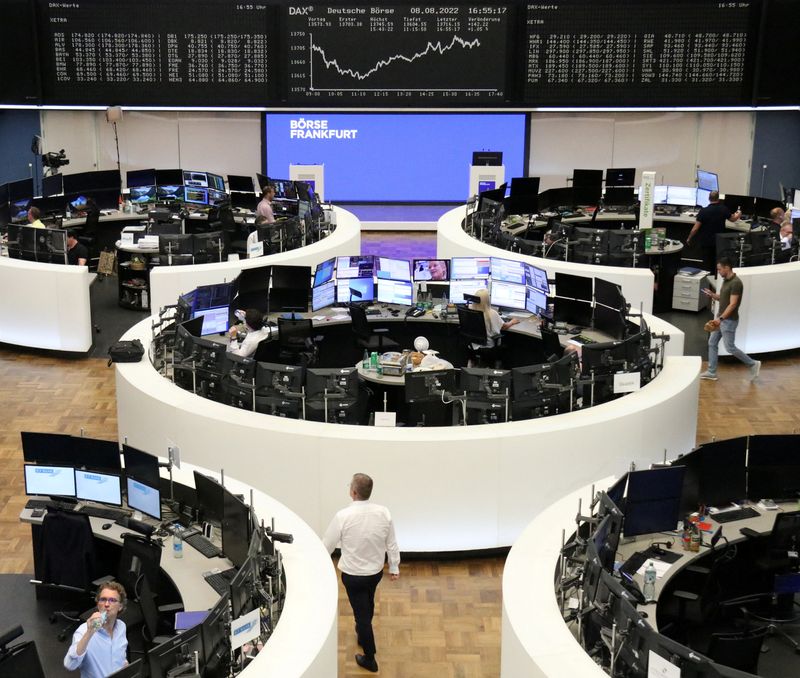 Brent crude reversed earlier losses to rise $1 a barrel to $97.41 after reports Russia had suspended oil exports via the southern leg of the Druzhba pipeline.