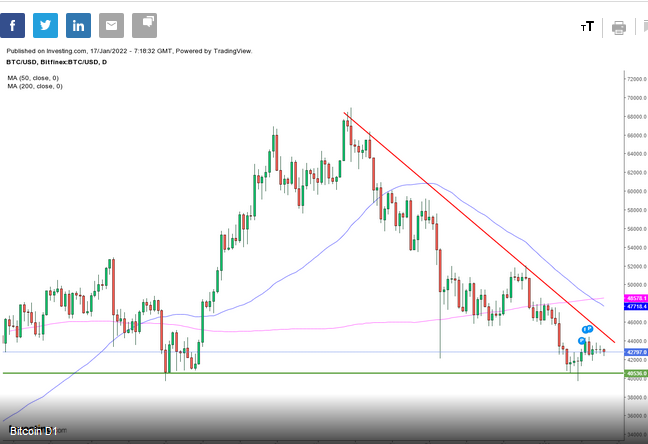 Investing.com - For once, Bitcoin 's volatility was fairly low this weekend, with the cryptocurrency trending around the $43,000 mark.

However, the lack of new losses, encouraging in itself, should not mask the fact that the chart context for Bitcoin is powerfully bearish, especially in daily data.

Indeed, a descending trend line is clearly visible since the historical record of November 2021. However, only a return above $45,000 would attest to the crossing of this trend line.

Note, however, that this would not be enough to give the daily chart of Bitcoin a positive bias. We can only speak of a bullish reversal of the BTC/USD trend on the daily chart if it returns above $50-52,000, based on the current chart context.

Given that bitcoin has not posted any significant new losses since the validation of this signal, caution is still warranted regarding the possibility of more concrete consequences of this signal this week.

If BTC/USD resumes its decline, the first major support to watch will be the $40,000 area.

Finally, it is worth noting that while Bitcoin and most of the other major cryptocurrencies have shown mixed fortunes over the past few days, Cardano (ADA) has been the standout performer, rising over 20% over the weekend.